'Social Network' at 10: Fincher, Facebook and the Faking of an Empire - Rolling Stone
×
×

See Mark angry. His girlfriend has just broken up with him at a bar. See Mark run. Run, Mark, run! He gets back to his Harvard dorm room and he opens up his laptop; because it’s 2003, it is already set to LiveJournal.com. See Mark type out several angry missives and continually hit “send,” releasing a little bit of online bile out into the world. It’s not the first time something like this has happened re: angry men, bad choices and the internet, nor will it be the last.

See Mark come up with the idea for a site that compares the hotness level of various female Harvard students. Code, Mark, code! (Years later, he will characterize this as a “prank.”) He will hack into the databases of the college’s various “houses” and steal photos of students, creating a fun but cruel way for kids to pass time on a Tuesday night. See Mark generate an insane amount of traffic and almost take down Harvard’s servers. See Mark get reprimanded. See Mark start a revolution.

When The Social Network opened 10 years ago, a disclaimer noted that Facebook — the phoenix that would rise from the ashes of that initial night of rageblogging — had 500 million members in 207 countries. Today, it has around 2.7 billion members in virtually every nation around the world, even if some of those countries have blocked access to the site. The benefits have been substantial, and the setbacks — to free speech, to attempts at informing the public, to civil discourse and the safety of entire communities and races — have metastasized over the last five years. Using Ben Mezrich’s 2009 book The Accidental Billionaires as a primary source, the movie that kicks off with Jesse Eisenberg recreating the buzzed, rageblogging “Eureka!” moment would end up garnering eight Oscar nominations (it’d win three). It would prove that David Fincher could make great movies that didn’t involve serial killers or Brad Pitt, that Nine Inch Nails frontman Trent Reznor could score films, and that Justin Timberlake could act. And it would also give us a highly subjective origin story of both a young Frankenstein and the monster he created, one which has arguably eclipsed the real tale of Mark Zuckerberg’s rise to prominence. When it comes to Facebook, however, truth seems to be a very mutable, malleable thing.

The temptation is to call Fincher and screenwriter Aaron Sorkin’s tale of an ironic American Success Story — for what does it profit a man if he gains the whole world but loses his soul, and also possibly some Likes? — prescient, but go back and watch the film if you haven’t in a while. It doesn’t predict the shitshow to come so much as chronicle a certain subset of Ivy-League entitlement and Cali tech-bro culture that, by 2010, had already wreaked plenty of social havoc. The movie’s Winklevoss twins (“the Winklevi,” as Zuckerberg calls them) could not be more patrician, the sort of future masters of the universe that view the world as theirs to hold on their rowers’ shoulders. Despite their admiration for the schoolmate’s disruptive ingenuity, they don’t recognize Zuckerberg as a peer so much as a potential employee — the brain-in-a-jar beta who will help turn their alpha concept of an elite social network into their moneymaker. Why, we let you into the lobby of our final club; don’t you feel like that mortal in “The Creation of Adam”? Instead, Zuckerberg stalls, “steals” their idea and gets a superior product out there first. Free Market 101, people! The brothers can’t believe they’ve been screwed. “He doesn’t have three friends to rub together,” claims Divya, their hype man, yet notes he signed 650 people up on the first day. Who’s the footnote now?

Also: Where do you go when you’ve pissed off the old-school aristocracy? You glom on to new money — enter Sean Parker. The Napster founder is presented as a combination of fairy godfather and Silicon Valley snake-oil salesman; he’s also introduced having already charmed the pants off of the future star of 50 Shades of Gray and is played by an ex-member of ‘NSync, so let’s say the deck is more than a little stacked in his favor. When he starts whispering in Mark’s ear about million-dollar brains and billion-dollar profits, the young man is hooked. It’s also the moment that Eduardo Saverin, Zuckerberg’s closest friend and co-creator of Facebook per the movie, is gently nudged out of the picture for the first time. He is of the work-your-way-up-pay-your-dues school of business ethics; he’s not the bong-hits-and-pool-ziplines type. There’s a whole new leadership model in town, and it wears a hoodied sports coat. 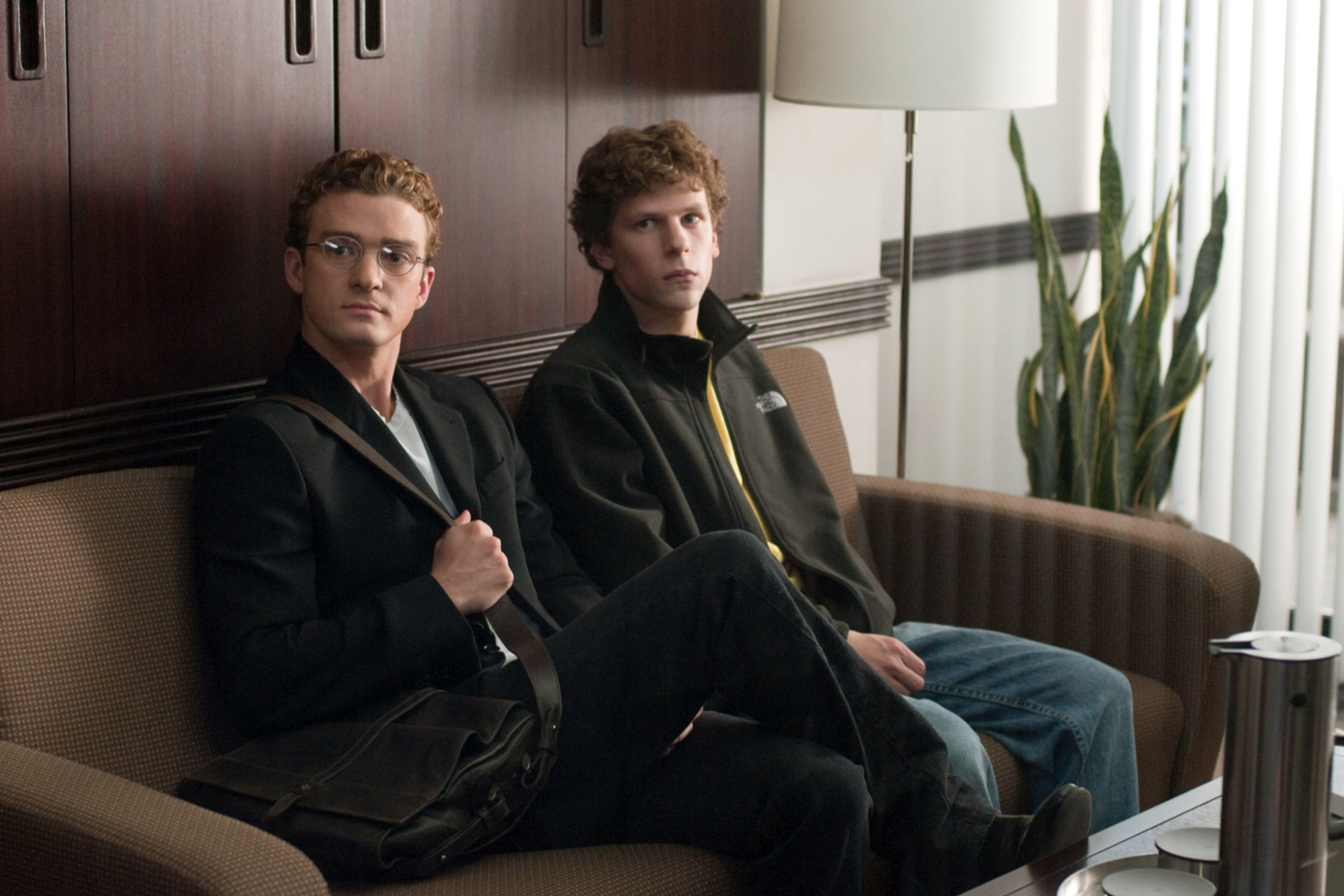 Justin Timberlake and Jesse Eisenberg in The Social Network.

This is roughly when the film, like Zuck, trades in one type of toxicity for another. The only difference is that even when The Social Network is slo-mo glamorizing both flavors of shenanigans, it still keeps its tongue firmly in its cheek. Zuckerberg’s North Star is anger, which comes out even more when we pivot to court depositions and Mark v. lawyers stand-offs. But envy also figures into the constellation. Parker and Severin get to tag-team the “you know what’s cooler” quotable line. The real movie lies in the shot that comes a few beats after that exchange: the look of sheer naked want on the Facebook founder’s face. He can not only beat the Winklevis of the world at their own game but change the game entirely to fit him. Living well is the best revenge of the nerds.

It’s a classic American story: The little guy with brains takes on the powerful big guys and wins, give or take a few lawsuits, broken friendships and stabbed backs. And 10 years later, you’re still struck by how much everything seems to be aligning to make this something like a modern classic. Fincher’s direction is on point as ever, but unlike some of his earlier work, there’s more of a balance between the sheer technique on display and his ability to let things breathe in the storytelling; the chill that runs through his more control-freaked output and high-concept genre exercises feels like it’s thawed out here. Sorkin’s script is filled with his signature high-velocity verbiage, and anyone allergic to witty screenwriter-ese rapport should double their usual Claritin dose — yet it complements the brainiac midnset of these characters to a tee. Eisenberg still hasn’t found a role that uses his gifts as an actor to this degree. It was the first time a lot of us realized that Rooney Mara (the object of affection that arguably kicks this whole thing off) and Armie Hammer (playing both Winklevoss twins, with the help of fellow actor Josh Pence and some cutting-edge technology) were big-screen material. Had Reznor and his co-conspirator Atticus Ross only written the opening piano-plinking bit and that apocalyptic take on “In the Hall of the Mountain King,” they’d still deserve those Oscars. Add in Jeff Cronenweth’s Ivory-Tower magic-hour cinematography and the nimble timeline juggling courtesy of editors Kirk Baxter and Angus Wall, and you see why the film ended up on so many best-of-the-decade lists.

The only difference between now and then is that, even as late as 2010, it was still ever-so-slightly possible to consider Mark Zuckerberg “the little guy” in this scenario. The Social Network may present a less-than-flattering view of the tech giant in his unruly, undermining younger years, but to treat it as some sort of warning about him is a mistake. It’s a brilliant piece of cinema that doesn’t double as a crystal ball, and character flaws or not, there’s little that tells us that the often impatient, on-the-spectrum guy we see in the film be called to the carpet for pumping out misinformation, data-mining us to death and contributing to the demise of civil discourse. We’re left with just another antisocial guy alone in a room, just another Gatsby story fueled by class aspirations, status grubbing and the need to impress a lady — someone who beats on, finger on the refresh button of his ex’s Facebook page, borne ceaselessly into the past.

Zuckerberg, naturally, claimed that never happened (he was already with his future wife Priscilla Chan by this point), and has repeatedly referred to The Social Network as a work of fiction. If he were smart, he’d hire the movie’s creative team to come back and, in the spirit of turning their film into a true Cassandra writ large, have them add on a coda. In this version, after we see Eisenberg/Zuckerberg forever waiting for the validating response that will never come, we dissolve to an exterior daytime shot. A man with a beard — maybe he’s played Justin Theroux? — looks at a newspaper, since reading the news on your phone is still years away. A headline mentions Facebook’s dominance as a social media platform, yet what copy we do see of the article suggests that there may be a downside to so much communication happening so prevalently online, in such insular circles. I think I have an idea of how to do this kind of thing, only shorter and better, he says to himself aloud. I think I know how to come up with an alternative that will allow disparate people to come together and bridge the gap of their differences in the spirit of global unity. He looks heavenward, and you can almost see the lightbulb going off in his head.

And then this man, who goes by the name Jack Dorsey, grins, turns around and starts walking down Palo Alto’s University Avenue. The camera pulls up in a crane shot and rests on a bird, who begins chirping so loudly and relentlessly that it falls dead onto an American flag. Roll credits. That may not be what really happened, but when the legend becomes fact, you print the legend. And then you press “send.”