Despite years of toiling in college-rock trenches (and weathering multiple lineup changes along the way, including the fatal 1988 heroin overdose of founding guitarist Hillel Slovak), the raunchy L.A. funk-rock quartet still hadn’t managed to transcend their “cult band” status by the time the Nineties rolled round. Mother’s Milk, their fourth and final album for EMI, had garnered some radio and MTV exposure thanks to a rocked-up cover of Stevie Wonder’s “Higher Ground,” but the 1989 LP – their most commercially successful to date – rose no higher than Number 52 on the Billboard 200.

But with 1991’s Blood Sugar Sex Magik, the Chili Peppers pole-vaulted to superstardom. The first RHCP album for their new label, Warner Bros., and their first with producer Rick Rubin, BSSM spawned four major hits – “Give It Away,” “Under the Bridge,” “Breaking the Girl” and “Suck My Kiss” – and reached Number Three on the Billboard 200; it would go on to sell over 13 million copies worldwide, 7 million of them in the U.S. alone. And with its broader artistic and emotional scope, BSSM revealed that the Red Hot Chili Peppers were more than just four rowdy guys with socks on their cocks who wanted to (in the words of a song from 1987’s The Uplift Mofo Party Plan) “Party on Your Pussy.”

In honor of its quarter-century anniversary, here are 10 lesser-known facts about Blood Sugar Sex Magik. 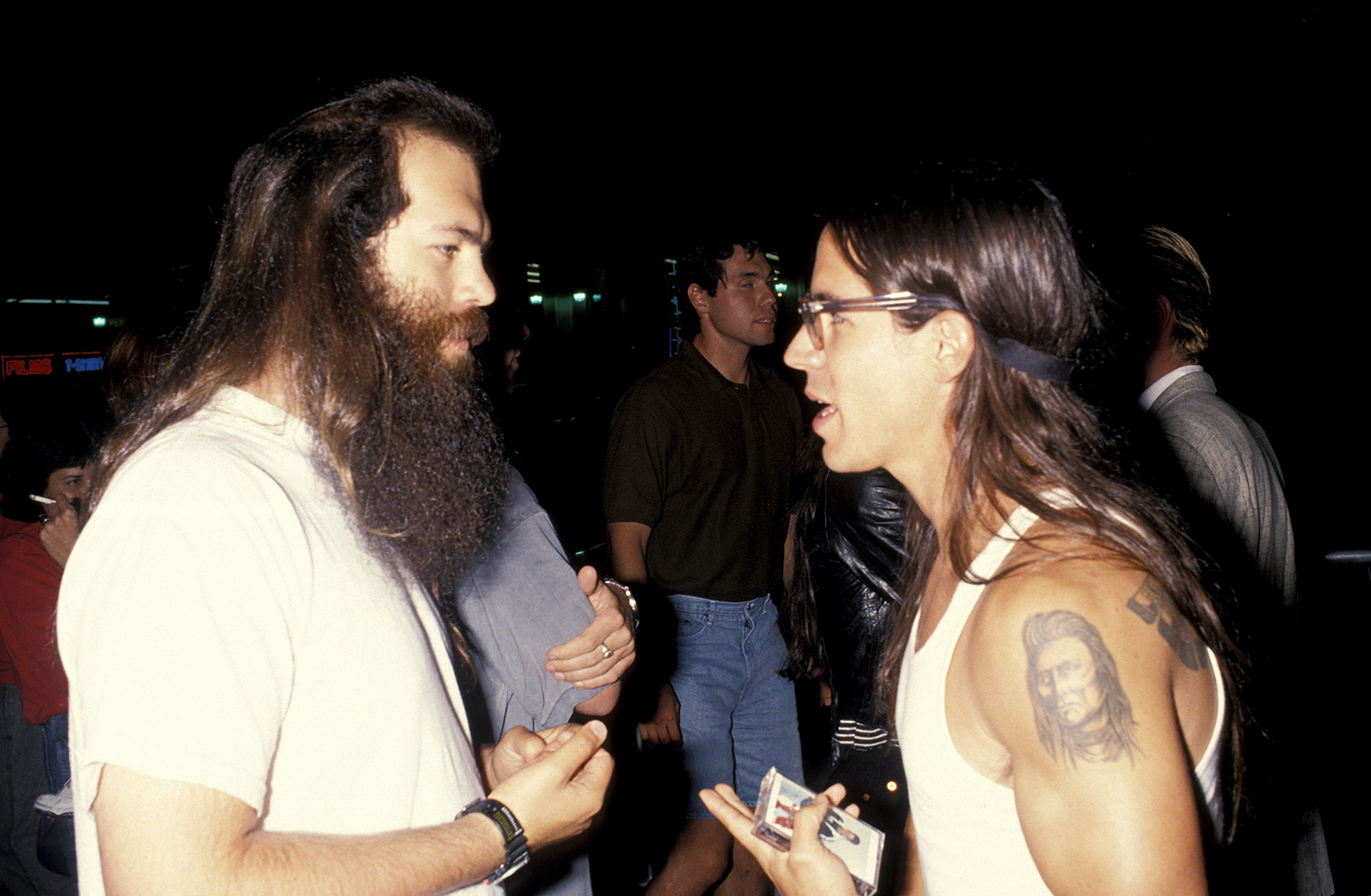 1. The band was initially reluctant to work with Rick Rubin.
Despite Rubin’s already-impressive track record as a producer, the Chili Peppers had some reservations about bringing him in to helm their fifth album. “At first, I thought, ‘Wow, Rick Rubin, I don’t know,'” Anthony Kiedis recalled to BAM magazine in 1991. “[I thought,] ‘He’s into all of these negative bands like Slayer and Danzig. The Red Hot Chili Peppers have always been totally into positive energy. It’ll never work.’ But then you get to know the guy, and you see how cool he really is.” Making Blood Sugar Sex Magik with Rubin proved to be such a positive and fruitful experience that the band ended up working with him on their next five albums.

2. Blood Sugar Sex Magik was the first album ever recorded at the Mansion, Rick Rubin’s massive Laurel Canyon estate.
Originally built in 1918, the Mansion – Rick Rubin’s sprawling 10-bedroom Mediterranean estate on L.A.’s Laurel Canyon Boulevard – has served as a residential recording studio for a number of Rubin-produced artists over the last 25 years, including Marilyn Manson, Slipknot, System of a Down, Mars Volta and Linkin Park. But it was the Chili Peppers who got there first: “Rick brought up the concept of recording in that house,” Kiedis explained to Metal Hammer in 1991. “We were completely gung-ho about the idea – we’d gone into studios so many times and there’d always been this kinda anal-retentive vibration, very sterile, high-tech. … So we thought how great it’d be if we actually moved into a house, lived and recorded there, how much warmer it would be, and how much more we could isolate ourselves.” Still, installing a 24-track recording desk into a giant old house with no soundproofing was considered a fairly radical idea at the time. “We had all these drum experts up there saying, ‘You’ll never get a good drum sound here,'” Kiedis told RAW magazine in 1991. “But they were totally wrong.”

3. One RHCP member was turned off by the Mansion’s haunted reputation, while another was totally turned on.
While Kiedis, bassist Flea and guitarist John Frusciante all lived in the Mansion for two months during the making of Blood Sugar Sex Magik, drummer Chad Smith absolutely refused to stay there. “We had heard that the property was haunted by a woman who was murdered there in the Thirties, and that didn’t sit well with him,” Kiedis later recalled in his memoir, Scar Tissue. “So he opted to ride his motorcycle home each night.” Frusciante, on the other hand, greatly enjoyed the ghostly sex noises he claimed to hear in the house. “There are definitely ghosts in this house,” he told Interview magazine. “One of the rooms has a very spiritually sexual vibe, and I actually heard a woman being fucked in there one day. I hadn’t masturbated the whole time that we’d been here, because I was so concentrated on my music, but then I slept in that room and I couldn’t resist the temptation to masturbate.” 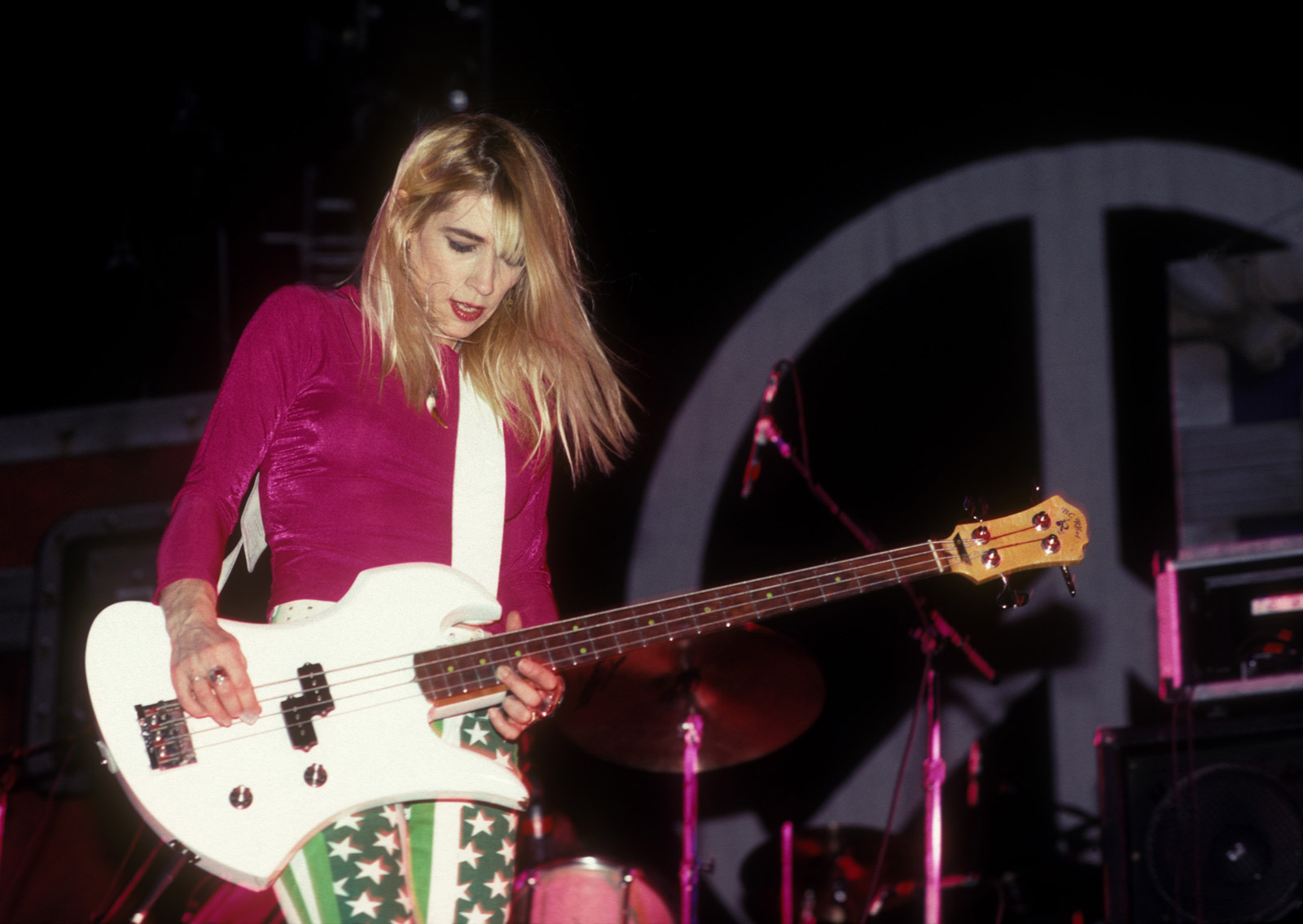 4. Kim Gordon inspired Flea to simplify his bass playing.
One of rock’s busiest bassists, the normally slap-happy Flea took a simpler, more melodic path on Blood Sugar Sex Magik. “I consciously avoided anything busy or fancy,” he told Guitar Player magazine in 1991. “I tried to get small enough to get inside the song, as opposed to stepping out and saying, ‘Hey, I’m Flea, the bitchin’ bass player.’ I hardly slap at all on the new record, aside from ‘Naked in the Rain.'” Flea went on to reveal that his new approach had been inspired by an interview he’d read with Sonic Youth bassist Kim Gordon. “She said she loved funk bass but hated the way white guys play it, because they’ve turned it into this macho-jock thing. As I read that, I knew I was responsible for that tendency. But on the new record I don’t do any of that – I try to play simply and beautifully. And I hope she doesn’t hate me, ’cause I think she’s great.”

5. All of John Frusciante’s guitar solos are first or second takes.
Blood Sugar Sex Magik‘s organic sound and feel derives largely from the fact that most of the album’s basic tracks were cut completely live – including many of Frusciante’s guitar solos. “A lot of John’s solos are basic tracks, cut live with the rest of the band,” Flea explained to Guitar World in 1991. “We did very little fix-up stuff. John’s philosophy was that he would only play a solo twice. He’d play it once, and if he didn’t like it or we didn’t like it, he’d play it again – completely differently. And that was it.”

6. “Give It Away” may be the only song in history inspired by both River Phoenix and Nina Hagen.
According to Anthony Kiedis in Scar Tissue, “Give It Away” was primarily inspired by some advice that German avant-garde performer Nina Hagen had given him several years earlier: “It’s always important to give things away,” she’d told him. “It creates good energy. If you have a closet full of clothes, and you try to keep them all, your life will get very small. But if you have a full closet and someone sees something they like, if you give it to them, the world is a better place.” The song also featured a shout-out to actor River Phoenix, whom Kiedis had met through his girlfriend, actress Ione Skye. “River was around a lot during the writing and recording of our album,” Kiedis wrote. “He was a big supporter of our band, and I wrote a whole verse about him in ‘Give It Away’: ‘There’s a river, born to be a giver, keep you warm, won’t let you shiver/His heart is never going to wither, come on everybody, time to deliver.'” 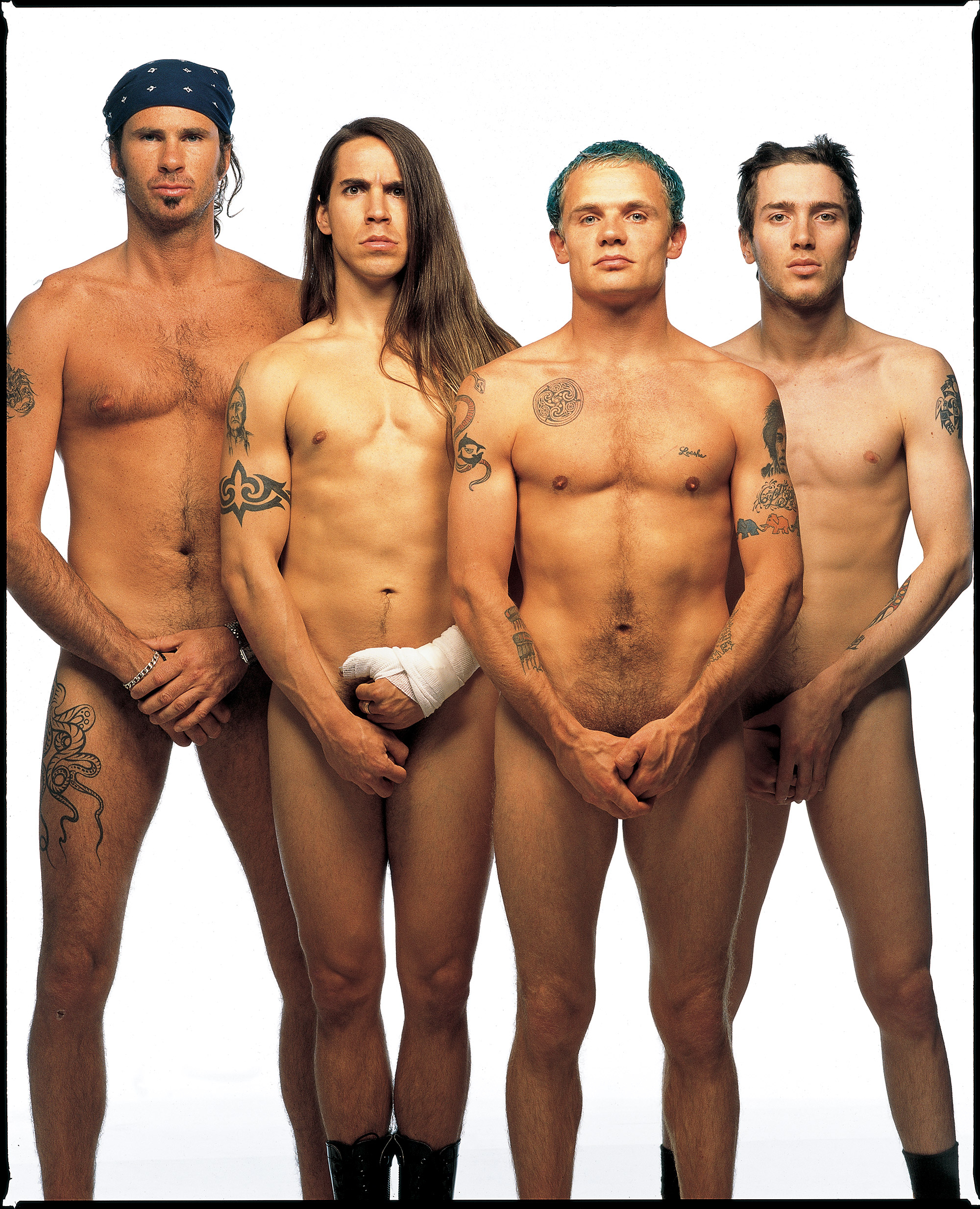 7. Anthony Kiedis wrote the words for “Under the Bridge” as a poem, never intending to use them in a RHCP song.
A massive worldwide hit in the spring of 1992, the somber “Under the Bridge” began life as a poem that Kiedis wrote during early rehearsals for Blood Sugar Sex Magik. The singer had been sober for two years at that point, and was feeling increasingly alienated from his still-partying bandmates. “I started thinking about my life and how sad it was right now,” he told Rolling Stone in 1992. “But no matter how sad or lonely I got, things were a million percent better than they were two years earlier when I was using drugs all the time. There was no comparison. I was reminding myself, ‘OK, things might feel fucked-up right now, but I don’t ever want to feel like I did two years ago.'” Kiedis never considered using the poem as the basis for a song, until Rick Rubin accidentally discovered it in one of the singer’s notebooks. “It was something I didn’t want him to see,” Kiedis told BAM magazine. “It was sort of sensitive, and I thought he’d hate it. But when he read those words, he demanded that I sing it to him – and it knocked him out. I didn’t even want the band to hear this song, but when they did, they were floored by it. As a result, it ended up on the record.”

8. Kiedis wrote “I Could Have Lied” about his short-lived relationship with Sinéad O’Connor.
A notorious ladies’ man, Kiedis had the rug pulled out from under him by Irish singer-songwriter Sinéad O’Connor, whom he briefly dated while she was living in Los Angeles. “We’d drive around and listen to music and kiss and whatnot,” he wrote in Scar Tissue, “but she wasn’t exactly letting me all the way in her door, so to speak. And I don’t mean just vaginally.” Still, Kiedis felt that it was “the most wonderful, non-sexual relationship I’d ever had,” and was absolutely crushed when O’Connor abruptly broke things off via his answering machine. In response, he and Frusciante stayed up all night writing “I Could Have Lied”; Kiedis dropped a tape of the song into O’Connor’s mailbox the following morning, but never heard from her again, save for an awkward encounter at an awards show years later. Despite his heartache, Kiedis allowed that he might have actually dodged a bullet. “Maybe she did me a favor in the end,” he wrote. “Who needs that kind of trouble?”

9. Blood Sugar Sex Magik was originally supposed to be a double-CD set.
Depending on which sources you believe, the Chili Peppers cut either 25 or 27 songs during the Blood Sugar Sex Magik sessions, though only 17 of them made it onto the album. According to Jeff Apter’s Fornication: The Red Hot Chili Peppers Story, Rick Rubin actually wanted to release the album as a two-CD set, with the producer believing that “it would have been much more digestible in that format.” But Warner Bros., wisely figuring that the higher price of a double-disc would scare off potential customers, insisted on a single-disc release. Several BSSM outtakes (including “Sikamikanico,” “Soul to Squeeze,” the instrumental “Fela’s Cock” and a cover of Iggy and the Stooges’ “Search and Destroy”) would later turn up on various B sides and movie soundtracks.

10. The band only played “Breaking the Girl” once on the entire Blood Sugar Sex Magik tour.
With its 6/8 time signature, ringing 12-string guitar, and space-y mellotron overdubs, “Breaking the Girl” was a very unusual song by RHCP standards, though that didn’t prevent it from becoming a big radio and MTV hit in the summer of 1992. Live, it was a different story: The band played the song only once on the entire Blood Sugar Sex Magik tour – on October 16th, 1991, during the tour-opening show in Madison, Wisconsin – before banishing it from the set list. “We tried to play ‘Breaking the Girl,’ and it fell apart,” wrote Kiedis in Scar Tissue, “but the rest of the show went well.” (A bootleg recording of the performance indicates that the vocalist may have had more difficulty with the song than the rest of the band did.) The song wouldn’t reappear in a RHCP set until 2000; and according to Setlist.fm, the band has only played it 16 times since then.

Red Hot Chili Peppers bassist Flea told us how he broke his arm snowboarding in our animated video. Watch here.