Pearl Jam were at a major turning point in their young career when they gathered at remote Nicasio, California, recording studio the Site to begin work on their second album, Vs. It was March 1993, and the past two years had seen the Seattle quintet rise from obscurity to become one of the biggest bands in the world, selling copies of their debut, Ten, by the millions, landing monster hits on the radio and MTV, and headlining festivals and arenas around the world.

Now, for the first time, Pearl Jam had to make a record that was certain to be a high-stakes blockbuster, and do it while dealing with a lead singer so uncomfortable with stardom that he entertained the notion of leaving the band and selling solo tapes directly to fans from his house. “There’s so much hype you could choke on it,” Gossard told the Los Angeles Times months after the release of Ten. “I wish people would forget that we come from Seattle. It’d be nice if they thought we came from Cleveland or some place like that.”

The plush conditions at the Site didn’t help matters much. A luxury big-budget studio designed to cater to the likes of Dolly Parton, Huey Lewis and Linda Ronstadt, the facility had a personal chef on location, a basketball court, access to a nearby golf course and even a sauna.

Unsurprisingly, Eddie Vedder was deeply alienated by Pearl Jam’s new workspace. He wanted the band to emulate the DIY ways of his heroes Fugazi and Black Flag, punk icons that cut albums in bare-bones low-budget studios. The gap between his ideals and the reality of life in a multiplatinum rock band was becoming unbearable.

“On the first record, we were living in a basement,” Vedder told writer Jonathan Cohen in his definitive oral history book Pearl Jam Twenty. “I was pissing in Gatorade bottles and putting quarters in the parking meter so my truck wouldn’t get tickets. On the second one, I felt too far away from the basement. It was a hard place for me at that point to write a record. Especially with lyrics. I didn’t want to be writing about hillsides and trees among luxurious surroundings. I was more into people and society, and chaos and confusion, and answering the question ‘What are we all doing here?'”

While his bandmates unwound by betting on $5 games of H-O-R-S-E on the basketball court, Vedder would take long solo adventures in his beat- up pickup truck (he was the one member of the group not to upgrade to a sleek car), often for days at a time, and come back with a notebook overflowing with lyric ideas.

His new writing went well with the melodies the others had been working on, drawn from soundchecks, impromptu tour-bus and backstage jams, and even the demos Gossard, McCready and Ament had crafted in the dark days of 1990, after Mother Love Bone’s Andy Wood passed away and a San Diego security guard named Eddie had yet to enter their lives.

The task of shaping everything into a cohesive album fell to Brendan O’Brien, a 32-year-old producer whom the group hired after hearing his work on the Black Crowes’ 1990 album Shake Your Money Maker. “They had just blown up with popularity out of nowhere,” O’Brien told Rolling Stone in 2013. “I think that my role at the time was really getting those guys in a room and getting them in a head space to record and make records. In a lot of ways, it was a lot more difficult [than it is now] just because they were trying to feel their way around it.”

O’Brien instructed the band to meet every morning at 9:30 in the kitchen for a quick pep talk, followed by a softball game to relax everyone before they went into the studio. “My job was to try and keep everyone feeling as creative as possible,” he recalled. “The idea was to camp out at the Site, work the songs up and record them one at a time so, that way, we wouldn’t get too far ahead of ourselves.”

Inspiration for the lyrics came from an array of disparate sources, even the palpable tension between Vedder and his bandmates, particularly Pearl Jam’s newest member, Dave Abbruzzese. The jovial drummer joined right before Ten was released, and was elated to be in a popular band. Vedder, of course, found such naive enthusiasm for the rock-star life endlessly grating.

Early on in the sessions, Ament mistakenly told Vedder that Abbruzzese had recently purchased a gun. “In fact, I bought two!” Abbruzzese blurted. “But they’re glorified versions of pellet guns.” Vedder quickly sketched out a bitterly sarcastic song called “Glorified G,” beginning with the lines “Got a gun, fact I got two/That’s OK, man, ’cause I love God/Glorified version of a pellet gun/Feels so manly, when armed.” 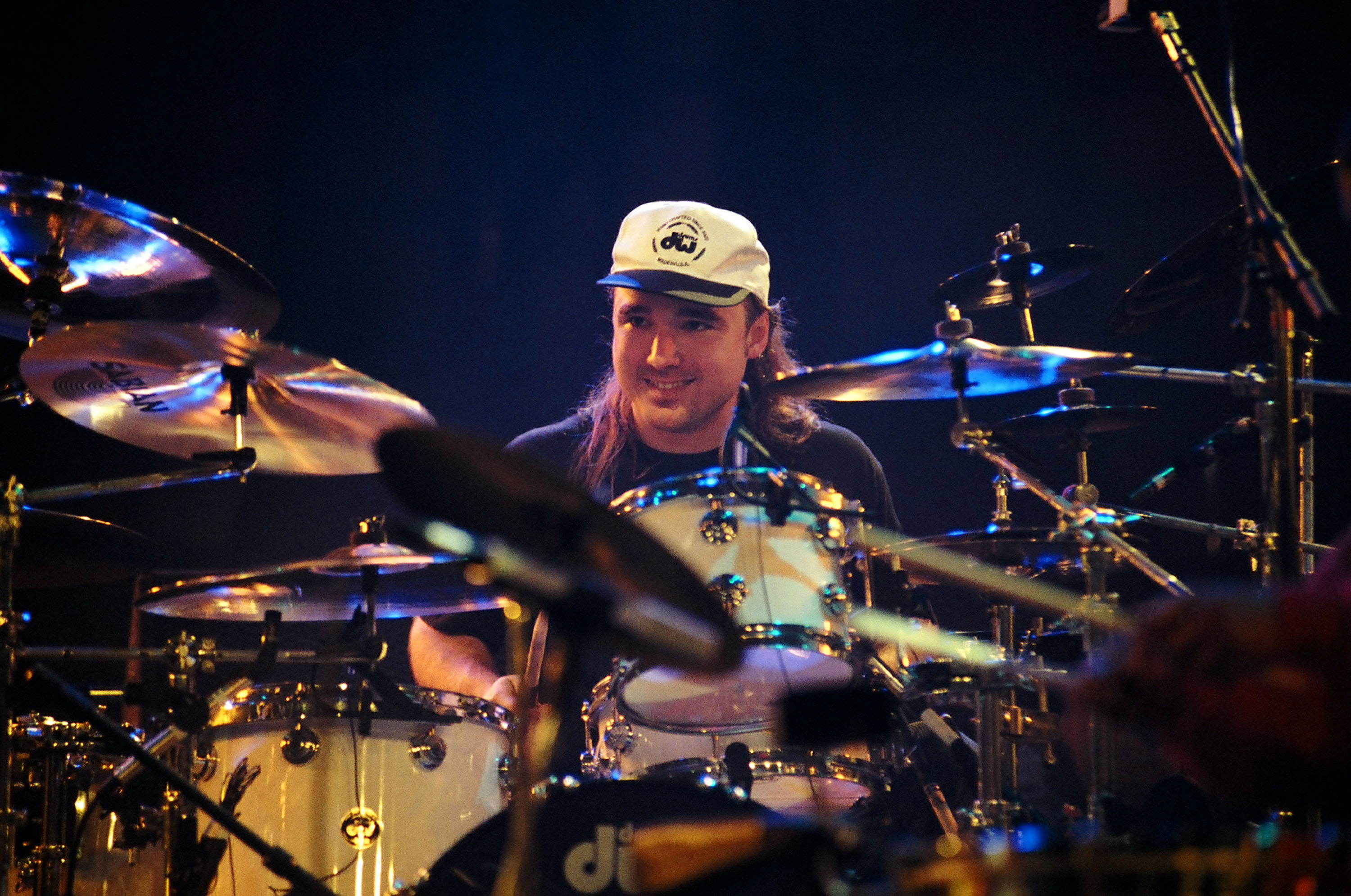 Ironically, it was Abbruzzese, a drummer with little experience at songwriting or guitar playing, who came up with the riff for the song that would become Vs.’s explosive open- ing number, “Go.” The song began as a little acoustic bit in dropped-D tuning that he worked out one night – without a pick – when the group was sitting around a campfire. “It was odd to have a drummer playing guitar,” said McCready. “But also to have such a cool riff. We worked on it a little bit that night, and the next day, we finished it in the studio.”

“Daughter” took far longer to come together. The acoustic tune began in a hotel bathroom in Denver, where the group found a cool echo sound, and was later fleshed out on a tour bus as a camcorder documented a writing session. Originally called “Brother,” the song took on a whole new power after its title was changed to “Daughter,” a switch that made the song seem as if it were coming from the perspective of an abused girl disowning her family. The haunting “Elderly Woman Behind the Counter in a Small Town” was a response to criticism that nearly every song on Ten has a single-word title, while “Animal” has been interpreted as coming from the perspective of a gang-rape victim (“Torture from you to me/Abducted from the street”), though others have seen it as Vedder commenting on the tension between himself, his four band- mates and the band’s manager Kelly Curtis. “Said one, two, three, four, five against one,” Vedder growls confrontational- ly. “Five against one!”

For a while, “Five Against One” was also the album’s working title, and for much of the LP’s gestation process, that was the dynamic: Vedder versus everyone else. The singer didn’t want to promote the album with a music video, costing them untold millions in free promotion on MTV. He also refused to grant interviews to virtually anyone other than Cameron Crowe of Rolling Stone. Even Nirvana – who came from a more indie background and frequently took shots at Pearl Jam in the press – submitted to videos and granted interviews. To Abbruzzese and the others, it felt like a willful act of self- destruction. “When we pulled back, I was like, ‘Aww, man,'” McCready told Rolling Stone in 2006. “I was a bit bummed out, because I wanted to keep doing it, keep doing videos. We had this chance, let’s take it, you know? Let’s not blow it.”

But Vedder saw it as a necessary way to lower their profile, avoid overexposure and trim their sails for a long and fruitful career. That thinking helps explain why he was so reluctant to record “Better Man,” a gorgeous ballad he wrote years earlier for his group Bad Radio.

“I was like, ‘Awesome, that’s a hit!'” said O’Brien, who first heard it during preproduction. “‘Why haven’t I heard that before?’ They all just looked straight down, and the whole room was deflated. I knew I’d said the wrong thing.” Vedder even wanted to give the song away to Chrissie Hynde to sing on a Greenpeace charity record, but the band convinced him to keep it – the rare time when the five won out against the one. Still, “Better Man” wouldn’t surface until Vitalogy a year later. But even without “Better Man,” they had crafted an incredibly compelling record that toggled between the raw fury of songs like “Go” and “Animal,” sublime moments like “Daughter,” “Rearviewmirror” and “Leash,” and idiosyncratic tunes like “Rats.” “It was a little bit like we were making our first record all over again,” said Ament, “because it was with a different drummer and a new producer. And Dave had really different strengths as a drummer than [Ten drummer] Dave Krusen. The groove shifted on the second record.”

For the cover, the group selected a photo of a sheep on a farm in Hamilton, Montana, trying in vain to squeeze its head through a tiny hole in a fence. The message was clear: Pearl Jam may have felt trapped by fame, but escape was still possible.

Lack of promotion not withstanding, Vs. still sold an astonishing 950,000 copies in its first five days on shelves, a Sound-Scan record at the time. Pearl Jam had created a deliberately noncommercial record, but nothing could stop their fans from gobbling it up. Vedder’s vision of returning to his normal life before the band had taken off remained a distant fantasy.

“The first meeting [I had with Vedder], he said, ‘Help me, I don’t know whether I want this,'” recalled Pete Townshend. “I think I said … ‘Once you’ve been elected, you have to serve as mayor. You don’t have a choice.'”