Colloquially known as the Black Album, Metallica‘s self-titled fifth album still towers over the modern hard-rock and metal landscape like a giant obsidian monolith. Released 25 years ago today, Metallica – which sold more than 650,000 copies in its first week of release, and spent four consecutive weeks at the top of the Billboard 200 in the late summer of 1991 – has gone on to sell over 16 million copies in the U.S. alone, making it the best-selling album of the last quarter-century. And while it’s hard to believe that there is a headbanger alive who doesn’t already own it, the album continues to outpace most new metal releases in terms of sales, moving an average of 5,000 copies a week.

Metallica Talk 30 Years of 'Master of Puppets': 'We Were Just Kids'

Despite (or perhaps because of) its phenomenal success, Metallica continues to be a well-gnawed bone of contention among the band’s hardcore fans, with many believing that radio-friendly hard-rock anthems like “Enter Sandman,” “The Unforgiven” and “Nothing Else Matters” utterly betrayed the thrash metal promise of Metallica’s first four albums. But the band members themselves (along with producer Bob Rock) remain convinced that the album’s more streamlined direction was a necessary step in Metallica’s musical evolution. And hey, 16 million fans can’t be wrong, right?

To celebrate the 25th anniversary of the album’s release, here are some lesser-known facts about Metallica.

1. The band began writing shorter, simpler songs partly because of how bored their fans looked during their concerts.

While the members of Metallica largely felt that they’d taken their progressive-thrash concept as far as they could with 1988’s …And Justice for All, they’d also realized that they’d been testing the patience of their live audiences with epic, convoluted songs like the album’s nearly 10-minute title cut.

“We realized that the general consensus was that songs were too fucking long,” lead guitarist Kirk Hammett told Rolling Stone in 1991. “Everyone [in the crowd] would have these long faces, and I’d think, ‘Goddamn, they’re not enjoying it as much as we are.'” Hammett acknowledged that the band was becoming bored with the songs’ intricate arrangements, as well. “I remember getting offstage one night after playing ‘Justice’ and one of us saying, ‘Fuck, that’s the last time we ever play that fucking song!'”

2. “Enter Sandman” was the very first thing the band wrote for the album.

Hooky, sinister and hard-grooving, “Enter Sandman” perfectly encapsulated Metallica’s new direction. But rather than slowly transitioning towards a fresh approach, the band dove right in during the initial writing sessions for Metallica, taking a simple bluesy guitar lick from Hammett and quickly hammering it into what would become their biggest hit.

” ‘Enter Sandman’ was the first thing we came up with when we sat down for the songwriting process in July 1990,” drummer Lars Ulrich recalled in 2014. “The 10-minute, fucking progressive, 12-tempo-changes side of Metallica had run its course after …And Justice For All. We wanted to streamline and simplify things. We wrote the song in a day or two. All the bits of ‘Enter Sandman’ are derived from the main riff.”

Though the music for “Enter Sandman” was the first thing the band wrote for Metallica, frontman and rhythm guitarist James Hetfield wouldn’t finish the song’s lyrics until much later. Originally envisioning the song as being about an infant mysteriously dying in its crib, Hetfield was asked by the band and their management – via producer Bob Rock – to tone down the lyrics. 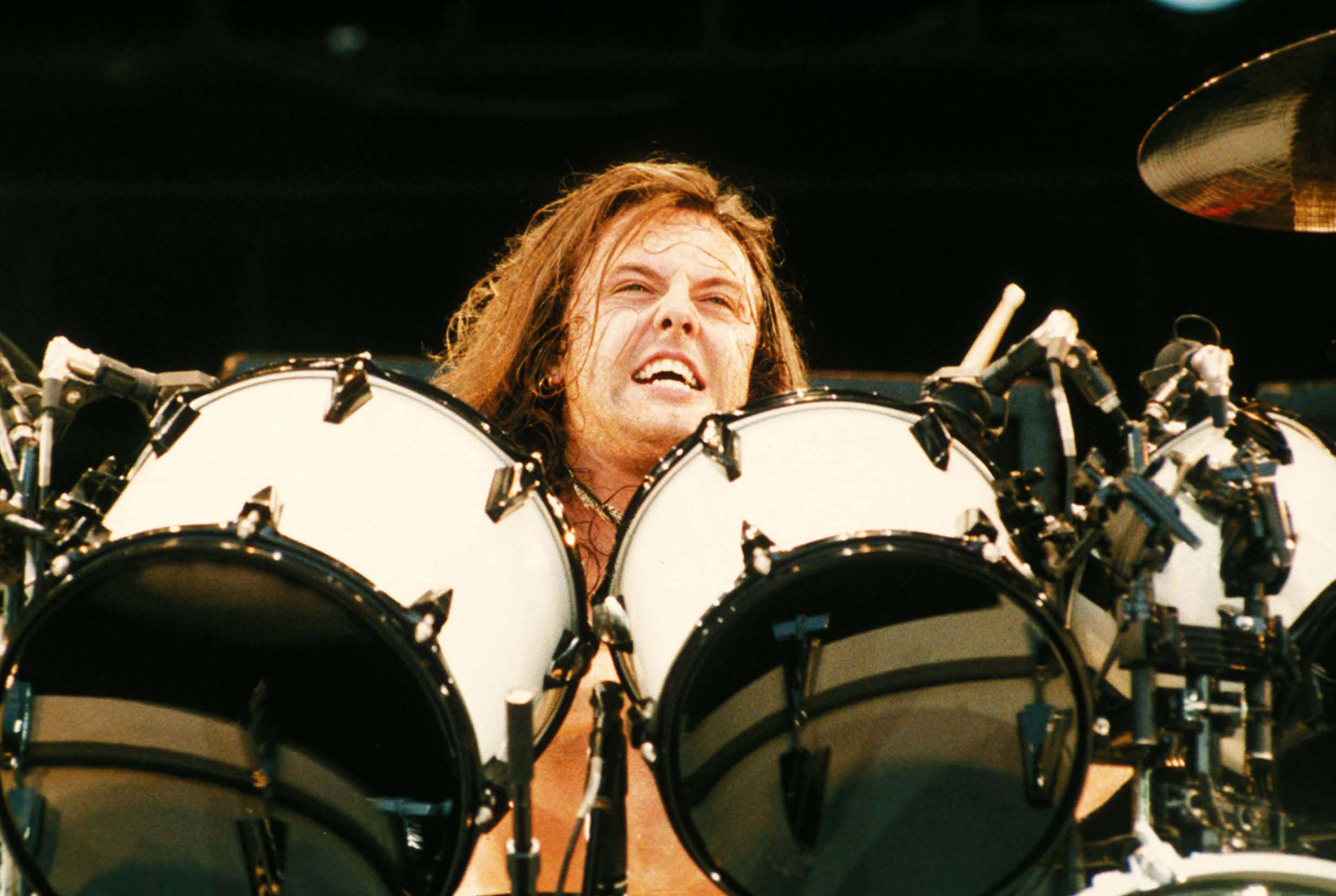 “At first, based on the music and the riff, the band and their management thought it could be the first single,” Rock recalled in 2011. “Then they heard James’ lyrics and realized the song was about crib death. That didn’t go over so well. …

“I sat down with James and talked to him about his words,” Rock continued. “I told him, ‘What you have is great, but it can be better. Does it have to be so literal?’ Not that I was thinking about the single; I just wanted him to make the song great. It was a process, him learning to say what he wanted but in a more poetic and open sort of way. He rewrote some lyrics and it was all there … the first single.”

4. Metallica picked Bob Rock to produce the record, despite not being big fans of the bands he’d previously worked with.

The band’s decision to hire producer Bob Rock to helm Metallica was a controversial one, since the Canadian producer and engineer was best known at the time for his studio work with Mötley Crüe, Bon Jovi, Kingdom Come, the Cult and Loverboy, five bands with just about zero thrash cachet. But the members of Metallica were more interested in the way he’d made those bands sound, rather than the music those bands had made with him.

“With Bob, we wanted a good mix,” Ulrich told journalist Garry Sharpe-Young in an interview for 2007’s Metal: The Definitive Guide. “We wanted that big sound at the bottom end, and I don’t care if that song is on a Bon Jovi record, a Cult record or a Metallica record. The sound is the sound and we needed that.”

While many hard-rock and metal bands through the years have used alternate tunings to achieve a heavier sound, Metallica had largely kept their guitars in regular E standard tuning before 1991, the only exception being “The Thing That Should Not Be” on 1986’s Master of Puppets (on which the guitars were dropped a full step and a half), and two cover songs on 1987’s The $5.98 EP: Garage Days Re-Revisited, where the band tuned down a full step. On Metallica, 10 of the album’s 12 songs once again utilized E standard tuning, but the band mixed it up a little more at Bob Rock’s behest, dropping the guitars to D standard for “Sad but True” and Eb for “The God That Failed.”

“I realized that every song, including this one, was in the key of E,” said Bob Rock of “Sad But True.” “I brought this to the band’s attention, and they said, ‘Well, isn’t E the lowest note?’ So I told them that on Mötley Crüe’s Dr. Feelgood, which I produced and Metallica loved, the band had tuned down to D. Metallica then tuned down to D, and that’s when the riff really became huge. It was this force that you just couldn’t stop, no matter what.”

6. The album also marked the first time that Metallica had ever recorded their basic tracks “live” together in the studio.

“We wanted a live feel [to the album],” James Hetfield told Guitar World in 1991. “In the past, Lars and I constructed the rhythm parts without Kirk and Jason, or Lars played to a click by himself. This time I wanted to try playing as a band unit in the studio. It lightens things up and you get more of a vibe. Everyone was in the same room and we were able to watch each other. That helped a lot, especially with some of the bass and lead stuff. It also helped that we’d played most of the songs for two months, even before we entered the studio.” 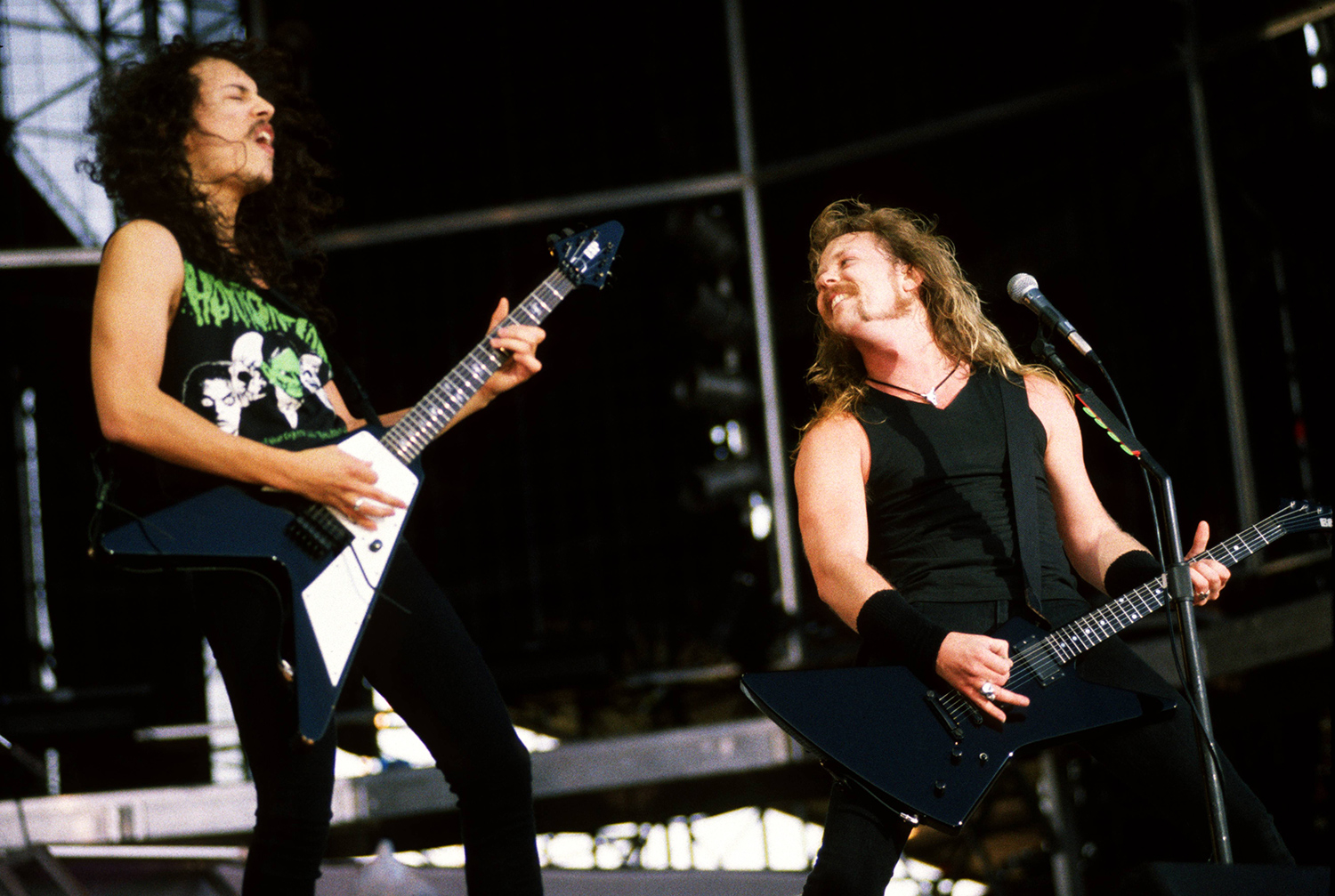 7. James Hetfield’s vocal performances on “The Unforgiven” and “Nothing Else Matters” were directly inspired by Chris Isaak.

“He [Hetfield] said, ‘Bob, I’ve never really sang before – I’ve just kind yelled,'” Rock recalled in a 2015 interview with Chris Jericho. “He played me a Chris Isaak record, and he said, ‘On ‘Nothing Else Matters’ and ‘The Unforgiven,’ I want to sing. How do you sing like this?’ I said, ‘I’ll get you a great vocal sound, so you don’t have to double your vocals. What you hear in Chris Isaak’s voice is the nuances when he sings – he isn’t doubled. He’s actually performing. You perform.’ We set it up so he was comfortable and had a great vocal sound, and then he sang. Every day he got better, and he got comfortable with it. He became a great singer.”

8. Three out of four members of the band were going through divorces during the making of the album.

The dark and bluesy feel of Metallica wasn’t just the result of the band’s new musical choices. Lars Ulrich, Kirk Hammett and bassist Jason Newsted were all singing the blues in their personal lives, as well.

“Lars, Jason and I were going through divorces,” Hammett told Playboy in 2001. “I was an emotional wreck. I was trying to take those feeling of guilt and failure and channel them into the music, to get something positive out of it. Jason and Lars were too, and I think that has a lot to do with why the Black Album sounds the way it does.”

9. Kirk Hammett appears in the video for “Nothing Else Matters” – but he doesn’t actually play on the track.

Originally written by James Hetfield as a love song to his then-girlfriend – and based around a musical figure that he discovered while absent-mindedly plucking his guitar strings during one of their phone conversations – “Nothing Else Matters” was a huge departure for Metallica. After hearing a rough version that Hetfield recorded for himself on a cassette tape, Ulrich convinced him that the band needed to record the song for Metallica; Hetfield then recorded the song’s acoustic intro and bluesy guitar solo himself, making it one of the few Metallica tracks that Kirk Hammett doesn’t play on.

“I had to relearn that whole intro part to play by myself onstage,” Hammett recalled in 2012, “which was a little bit intimidating for me at that point, [because] we never had a song that started that way.”

10. James Hetfield worried that “Nothing Else Matters” would make make Metallica fans “throw up.”

On August 3rd, 1991, Metallica took the unprecedented step of debuting their new album with a free listening party at Madison Square Garden. (“Our album played the Garden before we did,” Lars Ulrich would later joke.) With the exception of “Enter Sandman,” which had been released four days earlier, the 10,000 fans in attendance were hearing the music on Metallica for the first time – and James Hetfield was particularly worried about how they would react to “Nothing Else Matters.”

“I was just waiting for ‘Nothing Else Matters’ to come on,” Hetfield told Metallica Unbound author K.J. Doughton in 1992. “You know, to see if these people just look at each other and throw up! [Laughs] I was wondering how much peer pressure people were going to put on each other; people going, ‘Do you like this?’ ‘I dunno – do you like it?'” Happily for Hetfield, the song was well received. “People were pretty into it,” he recalled, “which was pretty amazing.”