Jessie Buckley is laughing. In fact, she’s laughing so hard during the onstage Q&A that follows the Tribeca Film Festival premiere of Wild Rose that she practically lists to one side. The 29-year-old Irish actress is trying to seriously answer the questions that are being thrown at her, of course, but a gesture from a friend in the audience — or perhaps the sheer silliness of finding herself in the spotlight — has made her crack up. Sporting a mop of coppery curls and a magenta velvet suit, she comes off like a giggling cross between Puck in A Midsummer Night’s Dream and a post-adolescent Little Orphan Annie.

And then a curious thing happens. Buckley suddenly kneels on the stage and, without fuss, sings Randy Newman’s “Guilty” as if she were performing at Birdland or the Café Carlyle. That spontaneous burst into song is followed by renditions of two numbers featured in the movie, Wynonna Judd’s “Peace in This Home” and Primal Scream’s “Country Girl.” Accompanied on acoustic guitar by Neil MacColl (son of Peggy Seeger and Ewan MacColl), Buckley has the audience rapt. A month later, she will produce the same spine-tingling effect singing at a screening of the film in Brooklyn — though, by that point, the Medusa hairdo has gone.

Her take on Newman’s addiction blues is electrifying in its torchiness, intimacy, and evocation of a life out of control, which is why it resonates with Buckley’s formidable turn in Wild Rose. When we first meet her character, a Scottish single mother in her mid-20s named Rose Lynn, she’s being released from a year-long stretch in the slammer, the result of tossing a bag of heroin into another prison yard. But she’s also an amateur country singer whose reckless vitality and blazing voice — part Bonnie Raitt, part Gretchen Wilson — have won her a dedicated following in her native Glasgow. Encouraged by the veteran DJ “Whispering” Bob Harris (playing himself), Rose-Lynn fixes on becoming a Grand Ole Opry star. Only a cash shortage and the conscience-pricking entreaties of her mom (Julie Walters), on whom Rose-Lynn constantly parks her young son and daughter, delay her pilgrimage to the promised land of Nashville. (The movie opens in limited release on June 21st and goes wide on July 5th.)

“It’s scary to want something for yourself,” Buckley says during an interview at an East Houston Street café in Manhattan three days after the festival event. “I recognize Rose-Lynn in me at different moments in my life. There was something powerful in me I was afraid of, that I felt the need to experience, but I didn’t know how to channel that. It was a passion within me, and when you love something or love someone and you need that and you want it to fill you up, it can have a life of its own. The fear of that has made me feel very vulnerable at times.”

The prison stigma and Rose-Lynn’s anxiety about bonding with her kids after her long absence bear down on her, but it’s her urge to perform at the hallowed venue that gave the world Loretta Lynn and Tammy Wynette that drives both her and the movie. She’s a scrappy underdog who ignites on stage in her Glasgow gigs — and Buckley seems like a natural-born singer of Southern-fried laments. Yet country music was completely foreign to her before she started the film.

“I’d no relationship to it at all,” she says. “I’ve always loved the blues, which I connect to Irish music, and I used to sing jazz before I went to RADA [Royal Academy of Dramatic Art]. I think I prejudged country as being like, you know, [mainstream country and Irish folk singer] Daniel O’Donnell. But the film’s music supervisor Jack Arnold got together this amazing bunch of musicians … and along with the writer Nicole Taylor, who’s a hardcore country fan, they drowned my ears in the best stuff.

“Emmylou Harris’s ‘To Daddy’ was the first country song I learned,” she continues. “I began to realize that country is such a pure storytelling form. It’s all about the lyrics — the music is incredibly simple — and the characters. These songs are like three-minute movies or snapshots of people doing quite mundane things, but they have a way of cutting into your heart. Every time I sing [John Prine’s] ‘Angel From Montgomery,’ I see a different woman or a different picture of this woman who’s never left her farmhouse. Country has taught me a lot about acting, actually, because you have to get out of your head and let images come to you when you perform.”

Born in Killarney in 1989, Buckley is the eldest of five kids raised by supportive parents, her mom a school vocal coach who sings opera (and who, incredibly, also made her own trip to sing at the Grand Ole Opry as a young woman), her dad a Ray Charles and Chieftains fan. She admits to having been “a not very cool” adolescent who “looked like Hagrid’s lovechild and was in a marching band.” She did “character-building things” and preferred musicals to pop music. Singing in Irish shindigs played its part in her development; these days she loves the Irish-American combo the Gloaming, Paul Simon, and Fleetwood Mac.

Buckley has had her share of setbacks. In 2008, she entered the TV talent show I’d Do Anything to compete for the Nancy part in a West End revival of Oliver! She came second, the audience vote outweighing the judges. At the time she was suffering a late teenage depression that a therapist helped her resolve. Playing the virgin wife Anne in the revival of Stephen Sondheim’s A Little Night Music, Buckley made her West End debut after it transferred from a fringe theater in 2009.

“I was so out of my depth,” she says with a laugh. “Looking back on it, I think I was crap. I was raw and scared, but in a good way, and It was an amazing first job.” She credits the possibility of knowing “every night I could fail massively” with feeding her performances. “That rawness is something I always want to go back to because it’s real and puts you in touch with the unknown and unconscious.”

Buckley studied at RADA, started getting TV parts, and did three Shakespeare plays in quick succession. “I didn’t ever think I could act really,” she said, “but Shakespeare unlocked a kind of understanding and curiosity in me. It’s like a bottomless pit of tension that’s so hard to make relatable, but that’s what’s exciting about it.”

In her first major TV role, she was cast as Marya Bolkonskaya, War and Peace‘s religiously devout princess whom Tolstoy visualized as the mother he lost when he was two. “Oh, I loved her,” Buckley says. “She was like a delicate porcelain vase — not at all like me — but she’s also a beacon of faith and hope.”

That project was also where she met Wild Rose director Tom Harper, who says Buckley’s audition tape for the the 2016 miniseries revealed “an intensity and a communication within the inner workings of her soul which is just so powerful and really shone through to me the first time I saw her act. And I think that quality to connect with the inner life is very transposable to Rose-Lynn, even though those characters are so different. In truth, she’s much more like Rose-Lynn than Marya.” 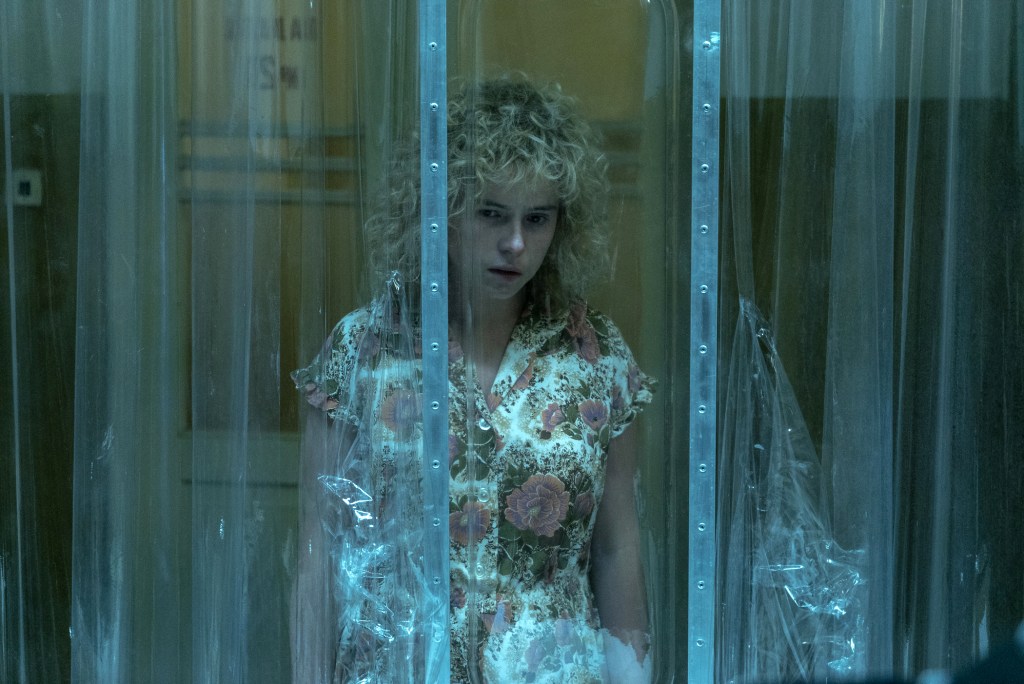 And in HBO’s recent miniseries (and unlikely runaway TV hit) Chernobyl, Buckley is mesmerizing as Lyudmilla Ignatenko, the real-life Ukrainian who battled Soviet bureaucracy to reach the bedside of her radiation-stricken firefighter husband, one of the first responders at the 1986 nuclear catastrophe. “I had to get my head into how that choked grief can live in a person,” Buckley says. “There’s something unspoken about Chernobyl because of the Soviets’ pride that can’t allow people to see the defects in their system on a world stage, but how do you relate that to someone losing their love or losing their life? I was scared to play Lyudmilla because there was a responsibility to the truth more than in anything else I’d done.”

Buckley will next be seen in Judy as Rosalyn Wilder, the production assistant who strove to look after the ailing Judy Garland (Renee Zellweger) during her disastrous 1969 residency at London’s Talk of the Town nightclub. There’s also Charlie Kaufman’s upcoming I’m Thinking of Ending Things, based on Ian Reid’s brain-twisting literary thriller, in which she stars as the suicidal woman taken by her boyfriend (Jesse Plemons) to meet his parents on their farm. Every time Buckley read the writer-director’s script she’d email him saying, “‘Charlie, I know exactly what’s going on,'” only to “read it again and go, ‘Oh my God, what was I thinking?'”

“I just want to act, put on a play, work with a crew, or sing and relate to an audience,” she says. “That’s what was so good about singing the other night – it’s important to me to get that close and personal with people. I don’t want to exclude myself from them by wearing a glamorous dress or stupid heels. That’s the thing about Rose-Lynn. She’s got foibles and she causes cracks and fuck-ups, but she’s of the people — and that’s what I want.”