During their first 10 years as a band, INXS went from playing pubs across Australia to filling modest-size venues in the United States. But that wasn’t enough for the group, made up of singer Michael Hutchence; guitarist and saxophonist Kirk Pengilly; bassist Garry Gary Beers; and the brothers Farriss – guitarist Tim, keyboardist and guitarist Andrew, and drummer Jon.

The result of their rising ambition was Kick, their sixth studio LP, released 30 years ago this week. With its sensuous, danceable blend of rock, funk, pop and blues, the album peaked at Number Three on the Billboard charts, surpassing their earlier career-best ranking of Number 11 with 1985’s Listen Like Thieves, which generated their first Top 10 hit, “What You Need.”

Kick has been certified platinum six times over in the United States, and has reportedly sold 20 million copies worldwide. Four singles off the album reached the Top 10 in the U.S., with “Need You Tonight” becoming the band’s first and only Number One. A special 30th-anniversary reissue of Kick will be released next month. In honor of the milestone, here are 10 facts about the album, from its initial reception to connections with Eighties vampire movies.

1. Their label hated the album.
After the success of Listen Like Thieves, the band teamed back up with legendary producer Chris Thomas to take their collective efforts a step further. Recording for a good portion of 1987, both in their native Australia and in France, the band felt they had built upon the possibilities opened up by “What You Need.” After the album was finished, longtime manager Chris Murphy took it to Atlantic Records president Doug Morris. “He put his feet up on the desk and closed his eyes from the minute the record went on to the minute it finished,” Murphy said in INXS KICK: the Words, a book that accompanied the anniversary reissue of the album. “When it stopped, he said, ‘I’ll give you a million dollars to go and record another album. This is not happening, this is shit.'” After that meeting, in which he failed to persuade Morris how “Need You Tonight” fit perfectly into the zeitgeist, Murphy received a call from the worldwide president of Polygram, who according to Murphy, asked, “What the fuck are Andrew and Michael doing?” And just for good measure, the head of Warner Music Australia echoed those sentiments. “Three different record companies with no interrelationship are all telling me the same thing,” Murphy said. One positive response did come in, giving Murphy hope to press forward. “I got a call from my product manager in France,” Murphy said. “He wanted to tell me that the band were geniuses, and that “Never Tear Us Apart” will be one of the biggest singles he’d ever heard and all the other tracks were brilliant. That gave me the spirit.”

2. A renegade move from their manager saved the LP.
After the initial bouts of rejection, Murphy, in an intrepid move, arranged a somewhat-clandestine meeting with Atlantic’s radio promotions executives to play them some of the songs. While the rock and R&B department staffers couldn’t figure out what to do with the heady mix presented before them, Andrea Guinness, who spearheaded college radio promotions, enamored with what she heard. Murphy booked a college tour – on his dime and the band’s – while the fate of the album was still up in the air. As “Need You Tonight” took off on college radio and the band sold out shows across campuses around the country, the efforts to make a major breakthrough in the U.S. began to pay off. Atlantic added the album to its fall release schedule. But the struggle was intense and according to the band’s official biography, INXS Story to Story, the members didn’t know how drastic the measures were that had to be taken. “I risked every dollar they had and every dollar I had on that tour,” Murphy said. “If it failed, there would have been a mutiny. It would have been the end of everything and I knew it.” 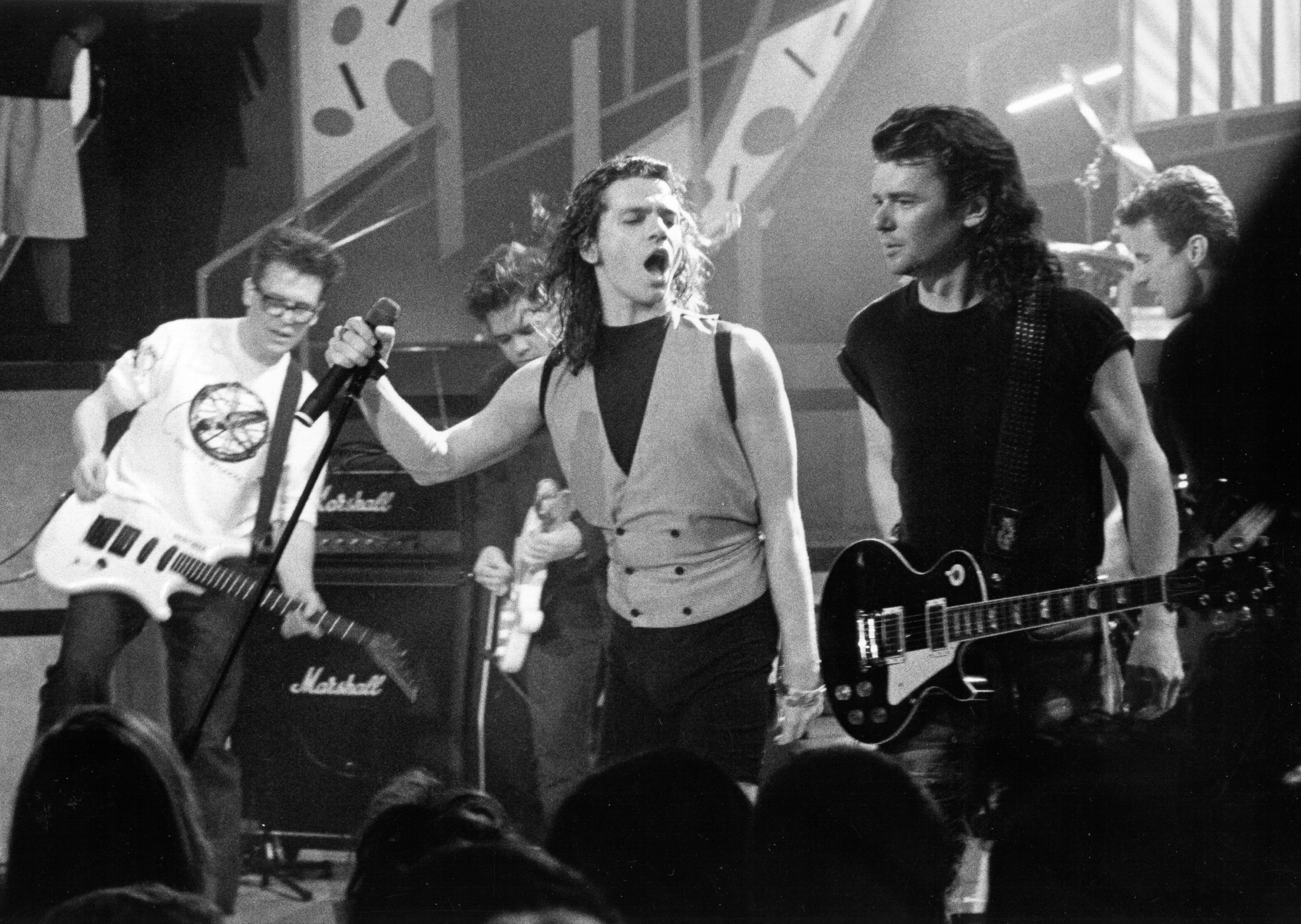 3. Hutchence and Andrew Farriss wrote all 11 of the original songs.
Buoyed by the success of “What You Need,” Hutchence and Andrew Farriss – the primary lyricist and songwriter, respectively – producer Thomas and manager Murphy wanted to bank everything on the Hutchence-Farriss partnership: Those two would write every song on the Listen Like Thieves follow-up. “That was the fundamental difference on Kick, Thomas said in Story to Story. “That songwriting partnership certainly worked – and it worked better than ever on that album. The massive success of ‘What You Need’ gave Andrew and Michael the optimism and confidence they needed to go further.” As Beers told Rolling Stone in 1988, “We understood that Andrew writes the best music, and Michael obviously writes the best lyrics, because he sings them. So we left it totally up to them.”

4. “Need You Tonight” came about at the last minute.
During the first phase of recording, with a European tour on the horizon, the band laid down a number of tracks for the album. However, Thomas thought that the band was still missing a major single, so Andrew Farriss and Hutchence were charged to come up with one. On his way to collaborate with Hutchence in the Hong Kong apartment he shared with bandmate Jon Farriss, Andrew came up with the familiar riff to “Need You Tonight” just as he got in the cab on the way to the airport. He told the driver he forgot something and needed to run back up to his place, where he proceeded to record a rough demo with the riff, a drum track and the bass parts. When he made it to Hong Kong, he gave the tape to Hutchence, who according to Farriss in INXS Kick: The Words, said “‘I think this is really interesting, give me five or 10 minutes,’ and he came up with, again, most of what was on the finished version.”

5. “Never Tear Us Apart” started on a very different path.
With Hutchence’s plaintive vocals, a distinctive guitar riff and the yearning cry of Pengilly’s sax solo, “Never Tear Us Apart” stands as one of definitive rock ballads of the late Eighties. How the song turned out is a far cry from its earliest incarnation. “‘Never Tear Us Apart’ was a piano song originally,” Thomas said in Story to Story. “It was a Fats Domino, bluesy, kind of Rolling Stonesy, early ’60s song. I heard it and thought we could do more [and] came up with the idea to substitute strings for the piano,” Thomas said. “That changed everything. It was what the song deserved, because in structure and lyrics, it was so strong already.” Andrew Farriss agreed with the decision, later telling MusicRadar.com that the strings “have the right kind of empathy for the vocal.” He also expressed his appreciation for his longtime songwriting partner Hutchence, who died in 1997, and his particular gifts. “He didn’t play an instrument, but his voice and his words were his instruments. He was phenomenal.”

6. Kick features the only cover song on an INXS studio LP.
Along with 11 original songs written by Hutchence and Andrew Farriss, the band squeezed in an update of a song they had some familiarity with in “The Loved One.” The song is a cover of a track by Australian band the Loved Ones, released in 1966. INXS took its first crack at the song in 1981, when it was released as an Australia-only single and video. The band covered it again for Kick, offering a different arrangement from their own original interpretation. It’s the only song the band has covered that made it onto one of their albums. “Good Times,” a version of a 1968 song original recorded by the Easybeats that featured fellow Australian Jimmy Barnes, landed on the soundtrack for The Lost Boys, with that track cracking the Billboard Top 50.

7. Kick finally broke INXS in England – thanks to a “Need You Tonight” remix.
While INXS first topped the U.S. charts with “Need You Tonight,” the band had some experience achieving that feat in other countries before, when “Original Sin,” from The Swing went to Number One in Australia and France back in 1984. However, breaking through in England proved to be difficult. When “Need You Tonight” came out there, it initially only went to Number 58. After it got a remix by Julian Mendelsohn, the song made it to Number Two, and Kick ended up becoming the band’s first BPI-certified platinum album. In 1991, INXS would headline a show at London’s Wembley Stadium in front of 72,000 fans. 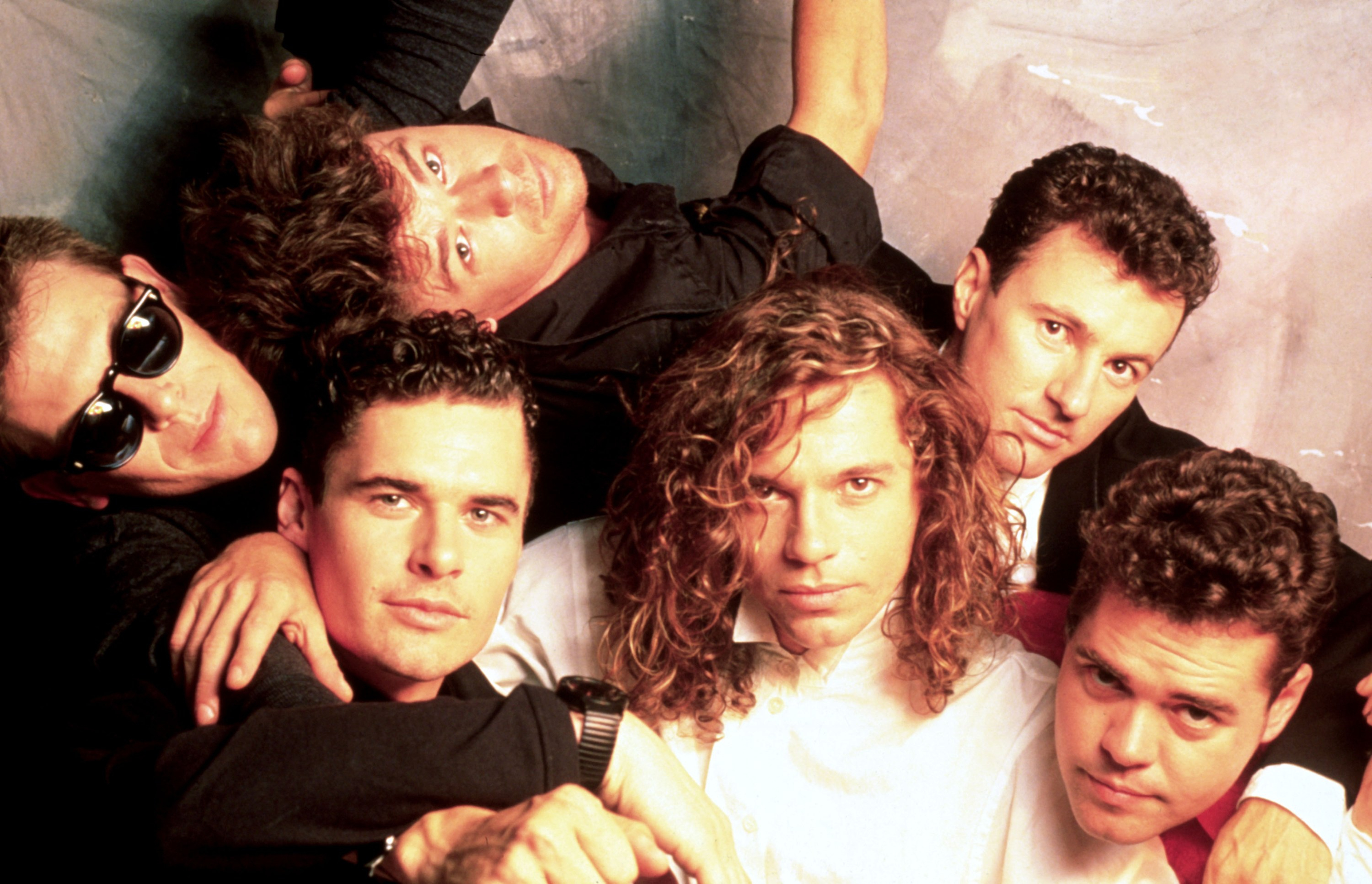 8. For the “Devil Inside” clip, the band cashed in on a favor from Lost Boys director Joel Schumacher.
The budget for The Lost Boys was $8.5 million, and not much was left for the film’s soundtrack. Joel Schumacher reportedly made arrangements with INXS and Lou Gramm (of Foreigner fame, who was also part of the project): He would direct future videos of theirs if they were to appear on the soundtrack. While he didn’t collaborate with Gramm later, he did team up with INXS for the “Devil Inside” clip, which echoed the beloved vampire flick, featuring the band performing in a bar on a Calfornia beach at night before a crowd of surfers and bikers. The video was nominated for Best Editing at the ’88 MTV VMAs, losing to “Need You Tonight”/”Mediate.”

9. The album’s string of hits kept Kick on the charts for more than a year.
Kick maintained a presence on the Billboard Top 200 albums for well over a year, due in no small part to an aggressive singles campaign. “Need You Tonight,” “Devil Inside” and “New Sensation” went to Numbers One, Two and Three, respectively, while “Never Tear Us Apart” peaked at Number Seven. The title track, which Hutchence called “the great Zen song of all time” in 1991 (“Sometimes you kick/sometimes you get kicked”) didn’t reach the Hot 100, but it did make it to Number 33 on the U.S. Mainstream Rock Songs Chart. The follow-up to that, “Mystify,” followed a similar path, making it to Number 17 on the Mainstream Rock chart.

10. The band partied with Guns N’ Roses and Iggy Pop after a surreal post-Kick gig.
In September 1988, INXS headlined an MTV-sponsored gig during its Calling All Nations tour that was the epitome of diversity: It featured the Smithereens; Ziggy Marley and the Melody Makers; Iggy Pop; and perhaps, most surprisingly, Guns N’ Roses, who were the openers. The Gunners were booked for the show months in advance, and by the time it happened, they were getting their own taste of fame. As the date approached, GN’R wanted to back out – to no avail. According to Story to Story, Hutchence and Andrew Farriss met Axl Rose and Slash before showtime, and Hutchence offered Rose some tips on handling success. “There is always going to be someone greater than you – always,” he said. “And you know what? So what, man. That doesn’t matter. Just do fine work and enjoy yourself. Believe me, that’s what it’s all about.” The rockers didn’t take Hutchence’s words entirely to heart as they cut their set short. As Pengilly wrote in his expansive tour diary, “Guns N’ Roses finished early (sounded terrible).” But there was a celebration with most of the acts afterward, he wrote: “Bit of a party backstage and then some back to the bar at the hotel and eventually most off to the M.H. suite for party till very late, along with Iggy Pop, our L.A. friends, Duff (from Guns N’ Roses) …”