Bob Dylan‘s second album of 1965, Highway 61 Revisited, would be a historic break: For the first time, none of the tracks would feature just him and his guitar.

On May 10th, Dylan finished the brief tour of England – eight all-acoustic shows – chronicled in D.A. Pennebaker’s documentary Don’t Look Back. By now, he was bored playing his old songs as he’d recorded them. “I was playing a lot of songs I didn’t want to play,” he’d say afterward. “It’s very tiring having other people tell you how much they dig you, if you yourself don’t dig you.”

Before long, he would bring that fight to his audience – some of whom would fight back at first – making music that embraced chaos and inspired it.

'We Want to Be Goofy and a Little Bit Rude': Wet Leg Finally Announce Debut Album

Everything was moving fast for Dylan – although he brought Joan Baez along on the U.K. tour, he was already living at New York’s Chelsea Hotel with Sara Lownds, who he’d marry in a private (and in fact secret) ceremony in November 1965. Adding to the blur – and, no doubt, the disconnection – was Dylan’s amphetamine use. “They were all so fucking high,” remembered Marianne Faithfull, part of an ever-changing cast of characters in Dylan’s suite at London’s Savoy Hotel that included Donovan and Allen Ginsberg. “Every five minutes or so someone would go into the bathroom and come out speaking in tongues.”

On May 12th, two days after a show at the Royal Albert Hall, Dylan marked the end of the tour by booking a London session with John Mayall’s Bluesbreakers, featuring a 20-year-old Eric Clapton on guitar, at Levy’s Recording Studio. It did not go well. “He was sitting at a piano, and we just joined in,” Clapton said. “It was just a jam session.” They played for two hours without getting anywhere. “You’re playing too much blues, man,” Bobby Neuwirth told Clapton. “He needs to be more country!”

Dylan would tell Michael Bloomfield more or less the same thing a month later. Bloomfield – the guitarist in the Paul Butterfield Blues Band – met Dylan in Woodstock the weekend before a June 15th session, a newly purchased Fender Telecaster (“a really good guitar for the first time in my life”) in hand. Dylan wanted to teach Bloomfield the songs they’d be working on. One had been condensed from a recent amphetamine-fueled go at writing a book. Dylan would later describe it as a “long piece of vomit,” 10 or 20 pages long, “just a rhythm thing on paper, all about my steady hatred, directed at some point that was honest.” It was based around the chord changes to Ritchie Valens’ “La Bamba” and was called “Like a Rolling Stone.”

“I figured he wanted blues, string bending, because that’s what I do,” Bloomfield remembered. “He said, ‘Hey, man, I don’t want any of that B.B. King stuff.'” Dylan had a sound in mind, and the following Tuesday, when they got to Columbia’s Studio A in New York, Bloomfield functioned as more or less the musical director, he has said. Producer Tom Wilson had gathered some of the studio musicians who’d worked on Bringing It All Back Home – keyboardist Paul Griffin, drummer Bobby Gregg and possibly guitarist Bruce Langhorne as well – and they started with 10 takes of a jumping version of “It Takes a Lot to Laugh, It Takes a Train to Cry,” then called “Phantom Engineer,” and moved on to six passes through a rocker packed with punchlines called “Sitting on a Barbed Wire Fence.”

The results – issued on various volumes of The Bootleg Series, including last year’s mammoth Cutting Edge set – show how the sound of Highway 61 Revisited came together. If Dylan’s acoustic guitar served as the jumping-off point for the music on Bringing It All Back Home, here it’s Bloomfield’s electric, which references the blues but reaches out to country twang and rockabilly snap. But when they moved on to “Like a Rolling Stone,” the five takes they tried didn’t jell. “The voice is gone, man,” Dylan said after the fourth take.

When they returned the next day, 21-year-old Al Kooper had bluffed his way into the session. Kooper was a guitarist, but he sat himself at the organ (which he says he faked his way through like “a kid fumbling for the light switch”) and wound up on the song. “Highway 61 was an unprofessional situation,” he says today, “exemplified by how I ended up playing on it.”

With Kooper supplying a bed of organ and Griffin at the piano, it took two rehearsals and four takes for “Like a Rolling Stone” to come together – though they kept going through 11 more takes, still searching, as if unaware of the history they’d made.

No one was unaware for long. The single was released on July 20th. Initial copies sent to radio split the six-minute song between two sides of a 45, but listeners demanded the whole song, and they got it. “It seemed to go on and on forever,” Paul McCartney remembered of hearing it at John Lennon’s house. “It was just beautiful. He showed all of us that it was possible to go a little further.”

Just five days after “Like a Rolling Stone” was released, with the song burning up the radio, Dylan appeared at the Newport Folk Festival with an electric band.

There is some lingering debate about the reaction: Were the boos that greeted their versions of “Maggie’s Farm,” “Like a Rolling Stone” and “Phantom Engineer” because the music was a shock, because there wasn’t enough volume for the audience to hear it, or because there was too much volume? But there was no mistaking Dylan’s intention. “Dylan wore rock & roll clothes,” Bloomfield said. “Black leather, yellow pin shirt without the tie. And he had a Fender Stratocaster. He looked like someone from West Side Story.” Four days later, that street fighter was back at Studio A, running down the rest of the songs for Highway 61 in just four days. 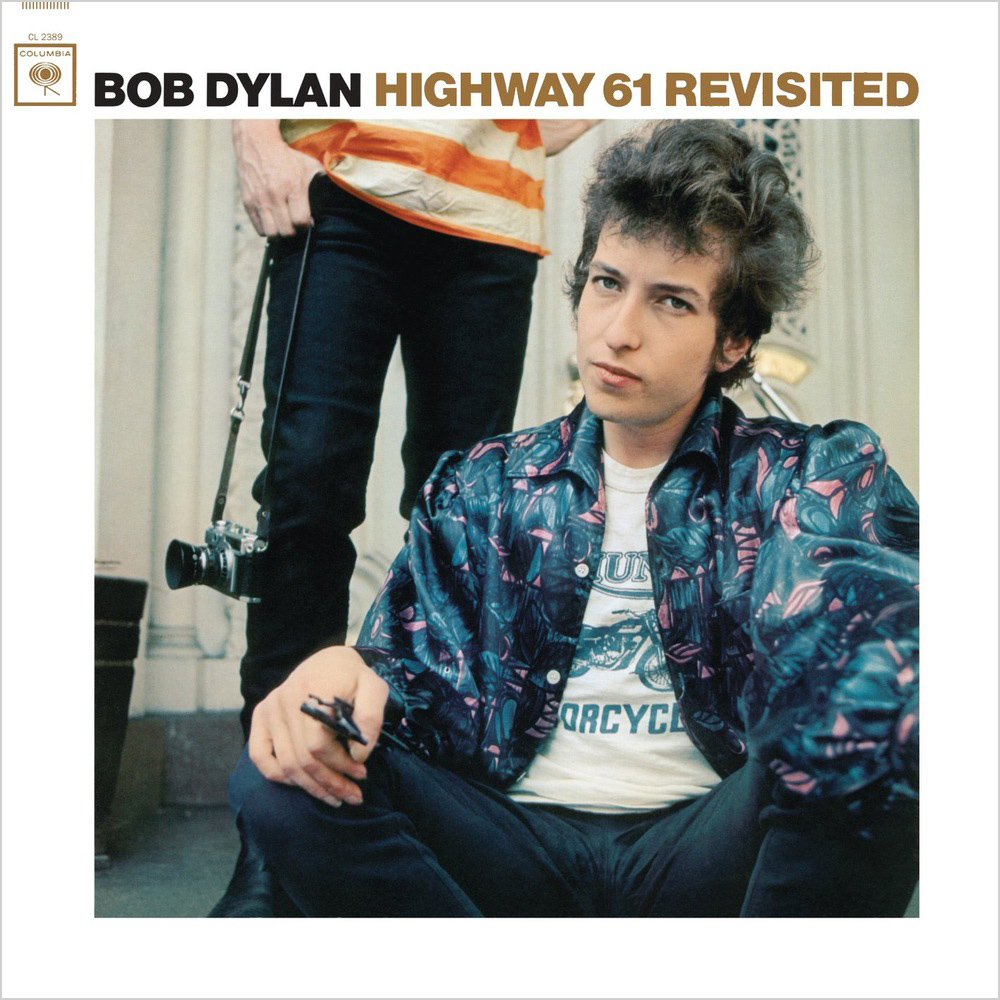 In the producer’s chair was Bob Johnston. Wilson – who’d overseen Dylan’s previous three albums – was gone. Why has never been fully explained, though Johnston pointed to tension between Wilson and Dylan’s manager, Albert Grossman. Johnston would be at the helm for Highway 61 and the five albums that followed it.

A July 29th session began with “Tombstone Blues,” a rollicking showcase for Bloomfield’s guitar that invoked the ghost of Belle Starr, the Wild West outlaw queen sometimes called “the female Jesse James.” They proceeded with “It Takes a Lot to Laugh,” which began at the rocking pace of “Tombstone Blues” until Dylan sat at the piano and reworked it into the sweeter, slower version heard on the album.

Then came Dylan’s next single, and what many felt was his retort to the boos at Newport and the reaction of folkie purists to his electric music: “Positively 4th Street.” Some of Dylan’s most acidic put-downs (“You have no faith to lose, and you know it”) floated on Kooper’s roller-rink organ and stabs of guitar outrage from Bloomfield. Issued as a non-LP single on September 7th, it would follow “Like a Rolling Stone” up the Billboard Hot 100, peaking at Number Seven.

Dylan and Kooper spent the first weekend of August in Woodstock. They worked on chord charts for the songs they’d take up on Monday. That session began at eight in the evening, and they homed in on what would become the album’s title track: “Highway 61 Revisited.”

The song took off with a gallop and one other thing: a police whistle that Kooper had brought to the sessions. “That was my fault,” Kooper says. “At the time, I wore that police whistle around my neck like a necklace. I would use it in certain situations, mostly relating to drugs – my sense of humor at the time. When we were recording the song, it just sounded great to me. I took the necklace and put it around Bob’s neck and said, ‘Play this instead of the harmonica.’ And there you go. And I think he kept it, damn it.”

The sessions continued with “Just Like Tom Thumb’s Blues,” which needed 16 takes to get that “lost in the rain” feeling. Clinton Heylin believes one contributing factor may have been the studio musicians – Sam Lay of the Butterfield Blues Band began the sessions on drums, and Frank Owens on piano. But as the evening wore on, it seems, Gregg took over on drums and Griffin at piano, and their touch was more in keeping with the exhausted feeling of the song. “Queen Jane Approximately” followed in seven takes, and then at two in the morning came the session’s quickest song, and perhaps its crowning glory: “Ballad of a Thin Man.” A phantasmagoric carnival ride, it appears to take shape around Ray Charles’ ballad of betrayal “I Believe to My Soul” (“You’re trying to make a fool of me”). It came together fast; it required just a false start and one run-through to get to the final take.

As dawn broke on August 3rd, there were complete takes of all nine songs for Highway 61 Revisited, as well as Dylan’s next hit single. But he scheduled a session for August 4th to take another pass at the album closer, “Desolation Row” – just him and acoustic guitar. It might have stayed that way, except that Johnston had an ace up his sleeve: Nashville picker Charlie McCoy, who overdubbed the distinctive guitar part that gives the song its Mexican-cantina flavor.

When Dylan took the album on the road, he’d call it “vision music” and “mathematical music” – though he neglected to specify if it laid out the problem, the solution or both. “I like the sound – I like what I’m doing now,” Dylan told Nora Ephron and Susan Edmiston at the time of Highway 61 Revisited‘s August 30th release. “They can boo until the end of time. I know that the music is real, more real than the boos.”