Twenty years after their mass suicide made headlines across the world, Heaven’s Gate is still one of the most notorious cults of the 20th century – not to mention one of the most recognizable. In March 1997, America was shook by the strange story that included mass suicide, wild public-access-style videos, an obsession with U.F.O.s and, in true late-Nineties fashion, tracksuits and matching Nikes. They also had a new recruitment tool: the Internet.

Heaven’s Gate has the distinction of being the first well-known American cult of the Internet era, using the new technology to share their beliefs with a wider audience and also to make a living. They derived a large portion of their income from designing web pages. Formed in the Seventies, they had become reclusive by the start of the 1990s and started attempting to recruit members online using the organizational name “Higher Source” for the website.

Though the web would eventually become central in the organization, the group’s origins were much more grassroots. In the early 1970s, founders Marshall Applewhite and Bonnie Nettles – a Texas music teacher and nurse that he met during a stay in a psychiatric institution – renamed themselves Bo and Peep and took a six-month-long road trip across the United States. Around 1974, they assembled a group called “the crew.” For the next two decades, they lived all around Southern California. Thought Nettles died in 1985, Applewhite kept the group together, and when the Internet was introduced to consumers in the early 1990s, they began using the new technology to share their beliefs with a wider audience. The reclusive group also used it to make a living, deriving a large portion of their income from designing web pages.

The cult’s philosophy took its roots from Applewhite’s Presbyterian upbringing – his father was a minister – and essentially grafted belief in extraterrestrials onto Christian theology. Applewhite told his acolytes that he was the second coming of Jesus Christ, that God was an alien, and that they were living in the end times. They read the Bible, especially, Revelation Chapter 11 in the New Testament, a section about two witnesses that would prophecy. At the end of their prophecy, they would have to battle demons, which Applewhite and Nettles called “the Luciferians.”

But then, in late March 1997, 39 members including Applewhite wearing black track suits and sneakers, ate apple sauce laced with barbiturates and washed it down with vodka. They then put bags over their heads, purple shrouds over their bodies, and laid down to leave their earthly vehicles behind. They weren’t killing themselves, they thought, but freeing their souls from their so they could ascend to a spacecraft flying in the wake of the Hale-Bopp comet – which at that point was passing by Earth – and were going to be taken to their new home in space. Instead, police found their bodies on March 26th, and the images of the white and black Nikes poking out from under a purple cloth would be burned into the eyes of a generation. 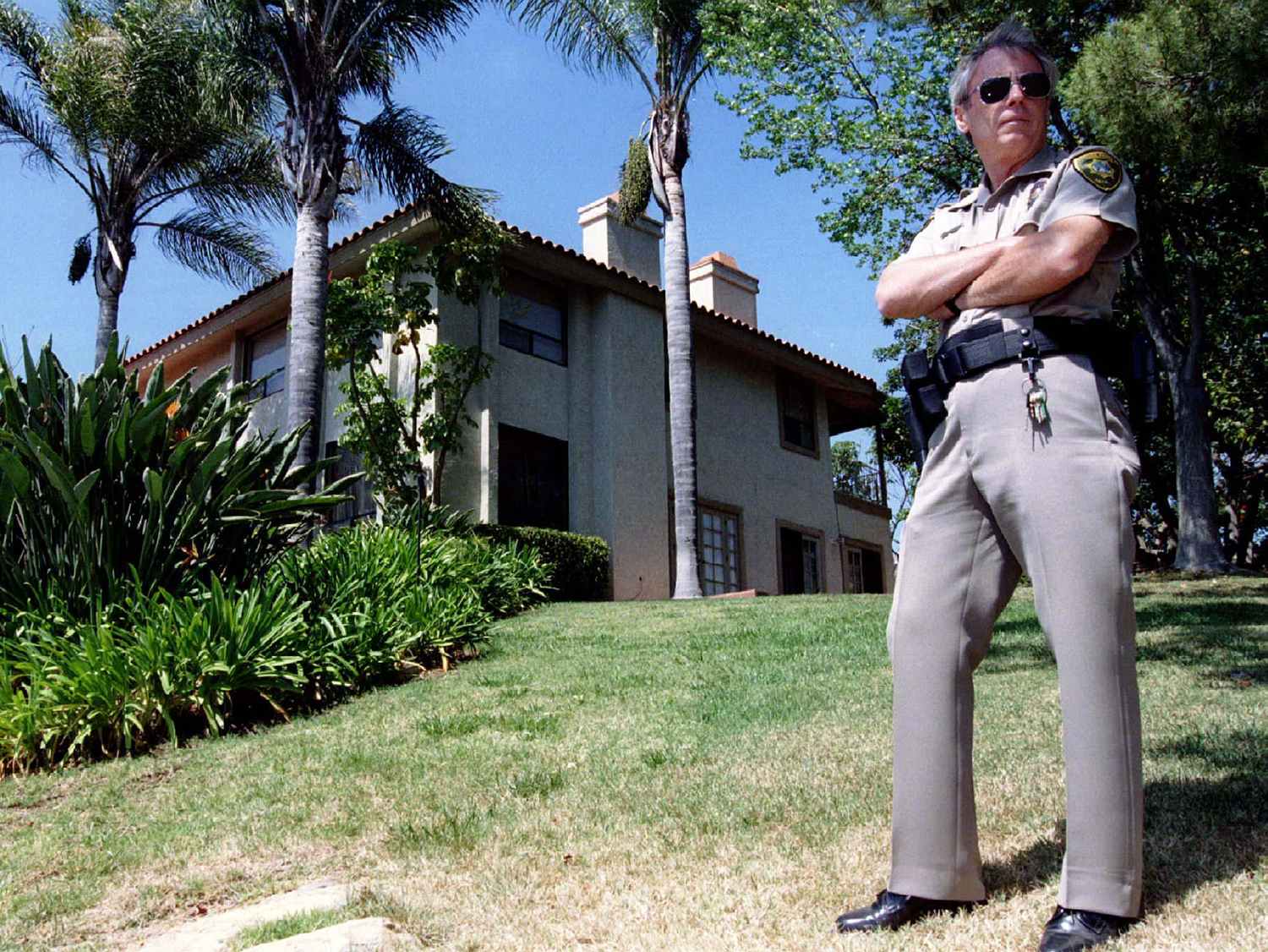 Here, 10 things you might
not know about the Heaven’s Gate cult and its infamous mass suicide

The cult borrowed a lot of imagery from science fiction
Applewhite and Nettles were huge fans of Star Wars and Close Encounters of the Third Kind, and they brought some sci-fi to the group – resulting in theories like that Mary had been taken aboard a spaceship and impregnated with Jesus. It also led to the members that would eventually kill themselves to wear patches that said “Heaven’s Gate Away Team,” which you can see in the group’s farewell video, a reference the specialized crew that went on missions to alien planets in Star Trek.

The group also believed that God was an advanced alien travelling in the spaceship in the trail of the Hale-Bopp comet, and that he planned to soon “recycle” the Earth. The group committed suicide so that they could ascend to “The Evolutionary Level Above Human.”

They made headlines early on
In September 1975, the group visited the small town of Waldport, Oregon, to give a lecture about how U.F.O.s were soon going to make contact with the human race. According to an article in the New York Times, roughly 150 people packed into a motel hall to hear Applewhite’s lecture. At first the town thought it was a joke, but soon, 20 people – or about one in 30 residents of the town – packed up, told their loved ones goodbye, and drove off.

“A score of persons… have disappeared,” Walter Cronkite said on the CBS Evening News. “It’s a mystery whether they’ve been taken on a so-called trip to eternity — or simply been taken.”

They had gone to a meeting of about 400 people in Grand Junction, Colorado, who believed they would be visited by alien beings. The rendezvous never happened, but the congregation did escape with their lives. According to the Times, none of these Oregon residents were among those found in 1997.

Members were devotees of the Master Cleanse.
Aside from abandoning your family and turning over all your money, cult members were asked to cleanse their bodies of the impure influence of things like fast food and impure sexual thoughts. That often involved things like the Master Cleanse, invented in the 1940s by Stanley Burroughs and republished in 1976 in his book The Master Cleanser. Cult member Rio DiAngelo, real name Richard Ford, told Newsweek that the group took it much farther than the diet’s other So-Cal acolytes – they drank nothing but the mix of lemonade, cayenne pepper and maple syrup for three entire months. 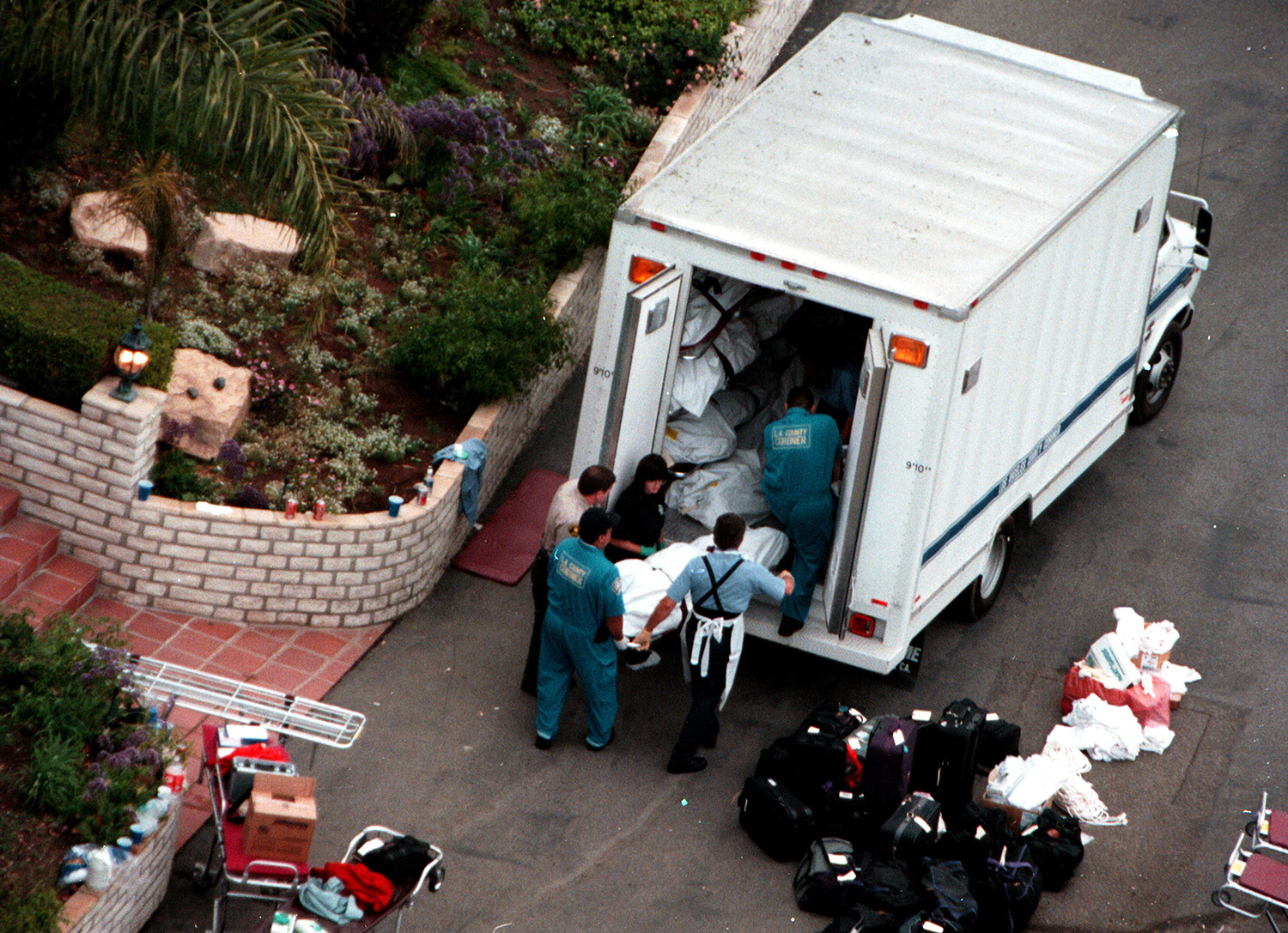 Originally, the cult promised that members wouldn’t have to die to ascend to a higher plane.
According to the BBC, members were originally told that they would be able to exit their “containers” without resorting to suicide. They told L.A. Weekly in 1994 that they hoped to be beamed up into space, taking their bodies with them into the “Next Level,” as members called their version of the afterlife. In the mid-1980s, when Nettles died of cancer, Applewhite amended his teachings to say that they would be given a new body in the Next Level, so their bodies wouldn’t necessarily go with them. The group acknowledged that death might be necessary if they were to be picked up by the alien spacecraft, but appears to have held out hope that they could do so without dying.

The suicides took place over the course of three days.
Though the 39 dead members of the cult were found on Wednesday, March 26th, 1997, coroner’s reports showed that the suicides were far from simultaneous. The members killed themselves starting Sunday using a combination of phenobarbital, alcohol and hydrocodone, probably consumed with apple sauce or pudding. The members then put plastic bags over their heads and suffocated to death, after which they were covered in shrouds. Applewhite was a late death, but not the last to die.

“Labeled ‘The Routine,’ the document outlined a process by which a group of 15 people would kill themselves, assisted by eight other people,” CNN wrote. “Then a second group of 15 would die, also assisted by eight people. Given that 39 victims were found, that would have left a final group of nine.”

Part of the Heaven’s Gate dogma was that everything had to be precisely the same
“Everything was designed to be… an exact duplicate,” surviving member Michael Conyers later said. “You were not to come up with, ‘Well I’m going to make the pancakes this big.’ There was a mixture, a size, how long you cooked it one side, how much the burner was on, how many a person got, how the syrup was poured on it. Everything.” Conyers said that even male members shaved their faces a specific way.

This is a common tactic for cults – if a leader wants to convince members to do something as extreme as commit suicide, they has to replace their entire belief structure with the belief structure of the cult, a process called indoctrination.

“[Cults] say, ‘You have to break out of your Western mentality,” David Sullivan, a private investigator specializing in cult deprogramming, told Harper’s. “You’re too judgmental. You have to abandon your whole psychological-intellectual framework. Your obsessive materialism is blocking you from seeing the truth.'”

The Next Level was a place without gender, and that led to castration
Applewhite and other members underwent the procedure to help ensure they remained celibate. Applewhite, who had been fired as a music professor at the University of St. Thomas in 1970 after administrators learned he had sex with a male student, sought cures for his homosexual urges. He wanted to find a way to have “platonic relationship where he could develop his full potential without sexual entanglements,” said one reporter who infiltrated the group in 1975. Castration, Applewhite believed, could make that easier. Ultimately, the group instituted a strict “no sex, no human-level relationships, no socializing” rule.

Though decisions like this were always left up to the members, eight followers were castrated voluntarily, including Applewhite. “They couldn’t stop smiling and giggling,” former member DiAngelo told Newsweek. “They were excited about it.” 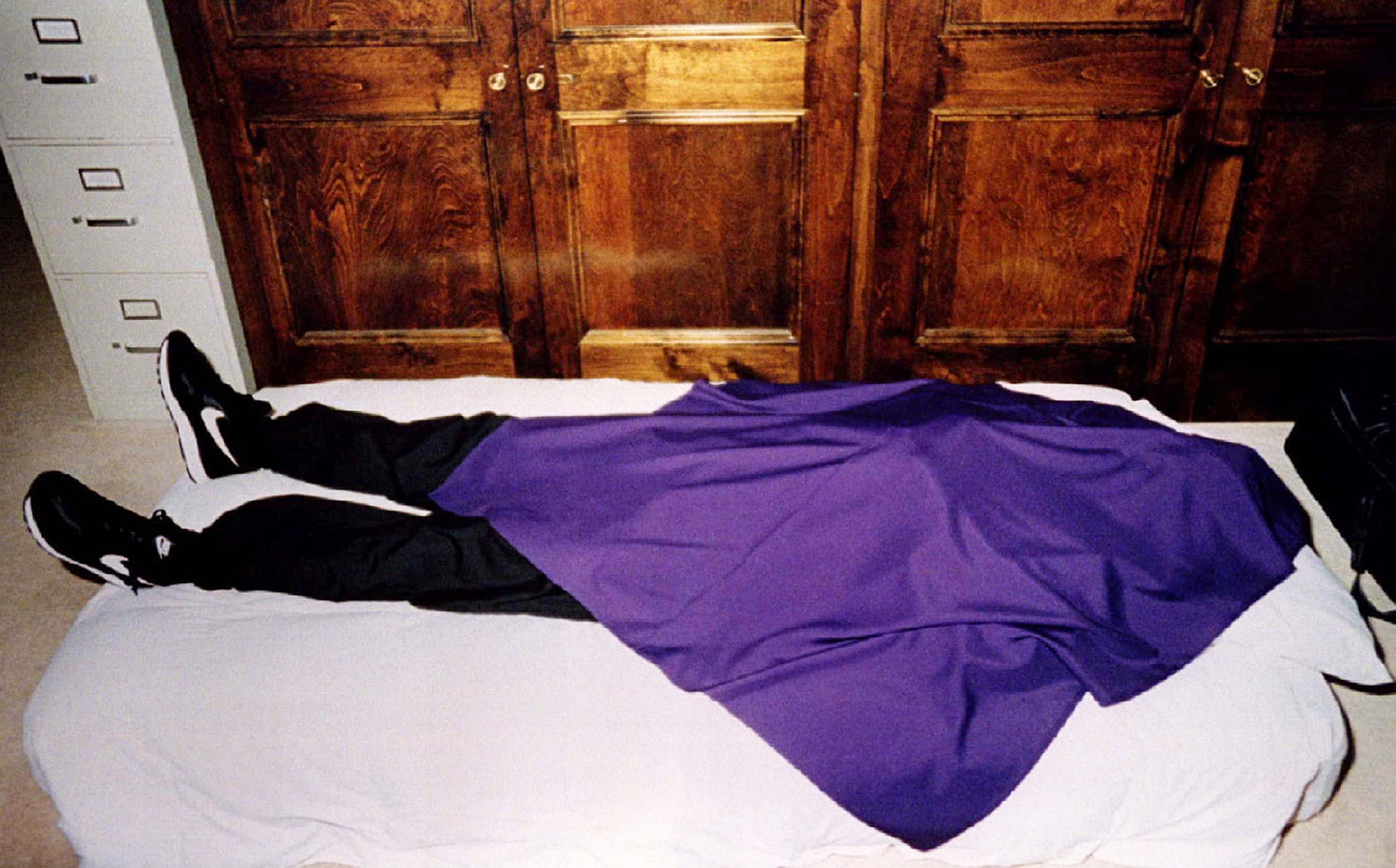 The cult went out for a last supper together.
Though Heaven’s Gate members were cut off from their families and friends, they were far from total recluses. Their final meal together was a big group dinner that took place at a chain that they frequented near their compound in Rancho Santa Fe, CA.

“And a week ago Friday [just before their suicides] — just a day or so before enacting their meticulously planned suicides — the cult went out for a last supper together at the Marie Callender’s restaurant in Carlsbad,” the BBC wrote.

“They all ordered the exact same thing,” a waiter recalled to the paper. “It was set up before they came in. They all had iced teas to drink. Dinner salads beforehand with tomato vinegar dressing. Turkey potpie for the entree. Cheesecake with blueberries on top for dessert. They seemed very nice, very friendly, very polite. No one seemed depressed at all, or anything like that.”

Two surviving members likely still operate the cult’s website.
One of the ways that Heaven’s Gate paid the bills was with a web design group called “Higher Source.” Their website is still online.

“Clients described Higher Source employees as diligent and professional,” the AP wrote. “They said the Web-site designers didn’t look particularly unusual for computer experts with a lot of work in the entertainment industry, with dark, collarless shirts and closely cropped hair.”

The pair most likely behind the Higher Source website are Mark and Sarah King according to Motherboard.

“The information must be available to mankind, in preparation for their return,” the page’s admins told Reddit’s blog. “We don’t know when that will be but those who are interested will find the information.”

The Nikes the group wore have become a collector’s item.
When the Heaven’s Gate members were discovered, they were all wearing identical black-and-white Nike Decade sneakers – and the company soon discontinued the style, due to its macabre associations. Since then, the shoes have become a collector’s item. An unworn pair apparently discovered in a storage unit in Arizona is up for auction on eBay for the asking price of $6,660, bearing Applewhite’s face as part of its advertising.

“We’ve heard all the jokes,” Nike rep Jim Small told Adweek in 1997. “The Heaven’s Gate incident was a tragedy. It had nothing to do with Nike.”

The surviving members agree. They say that the shoes were purchased in bulk because of their cost, not necessarily their style.

“They turned out to be a look that Do and the Class [adopted names for the cult leader and a member] liked,” they told Sole Collector in an email. “They were also able to get a good deal on them. It was a combination of factors that made the sale happen, not because of a particular model or brand.”