The Grateful Dead’s run of final “Fare Thee Well” shows in June and July will feature the surviving longtime members of the band alongside no shortage of musical assistants — including Phish’s Trey Anastasio, journeyman keyboardist Jeff Chimenti and veteran Dead moonlighter Bruce Hornsby. It’s worth noting that the Dead have had a long, strange and fruitful history with onstage guests. Here’s our pick of the hottest drop-in appearances from the tape vaults.

Jerry Garcia’s fellow Bay Area guitar guru sat in with the Dead a few times (see “Iko Iko” and “All Along The Watchtower” at the Calaveras County Fairgrounds in 1987). The most memorable, despite a dubious sound mix, was this latter-day appearance in the Nevada desert. It features a 17-minute, first-set “Bird Song” (with a tease of “The Other One,” which surfaces in set two) that really kicks in around the 12-minute mark, with Santana matching Garcia and raising him, gently. A shame he never played more with the band — here’s hoping he turns up in Chicago.

Stephen Stills joined the Dead for a two-night run at New Jersey’s Meadowlands in ’83 that included a fierce cover of “Black Queen” from the guitarist’s self-titled 1970 solo LP and a hoarsely joyous “Love The One You’re With,” which has the entourage sounding like a super-baked garage band. But his first session with the group was the best. This five-song L.A. melee in 1969 included an unusually spiky “Morning Dew,” a strutting “Good Morning Little Schoolgirl” with Pigpen wailing on harp and a nearly 12-minute “Black Queen” eventually skidding into “Lovelight.”

Serendipitously, the Jefferson Airplane were playing the War Memorial in Rochester, New York, the same 1970 evening that the Dead were doing a college late-nighter. So after his band’s gig ended, Airplane guitar pilot Jorma Kaukonen headed over to campus to join the Dead for a hot take on the Bobby Womack-via-Rolling Stones nugget “It’s All Over Now,” some smoking blues jams (both country and Chicago-style) and a rocking rendition of the old folk standard “Darling Corey.” Sketchy sound on the surviving bootlegs, but fiery playing.

Performing at a tribute concert to longtime promoter/mentor/booster Bill Graham following his death, John Fogerty fronts the Dead for a bunch of Creedence gems, including a kicked-back “Proud Mary,” which turns out to be a Dead natural, and “Green River,” which makes you wish Pigpen was still around to chime in. As a capper, Neil Young steps up to lead the band in a version of Dylan’s great benediction “Forever Young.” It never blossoms into the jam it might’ve been, but Young’s warbling tenor gilded with Garcia’s rippling guitar filigree is a memorable sendoff.

Following the Dead’s historic shows at the Great Pyramid, Egyptian percussionist, singer and oud player Hamza El Din joined the band stateside for a set that takes it deep into the Arabic modes dallied with on Blues for Allah. “Ollin Arageed” is the highlight, a searching, ecstatic flight of fancy based on a Nubian wedding song. But the real surprise, coming out of “Space,” of all things, is a feisty version of “Got My Mojo Working” with War harmonica hero Lee Oskar — a musical journey that moves from America to Africa and back. 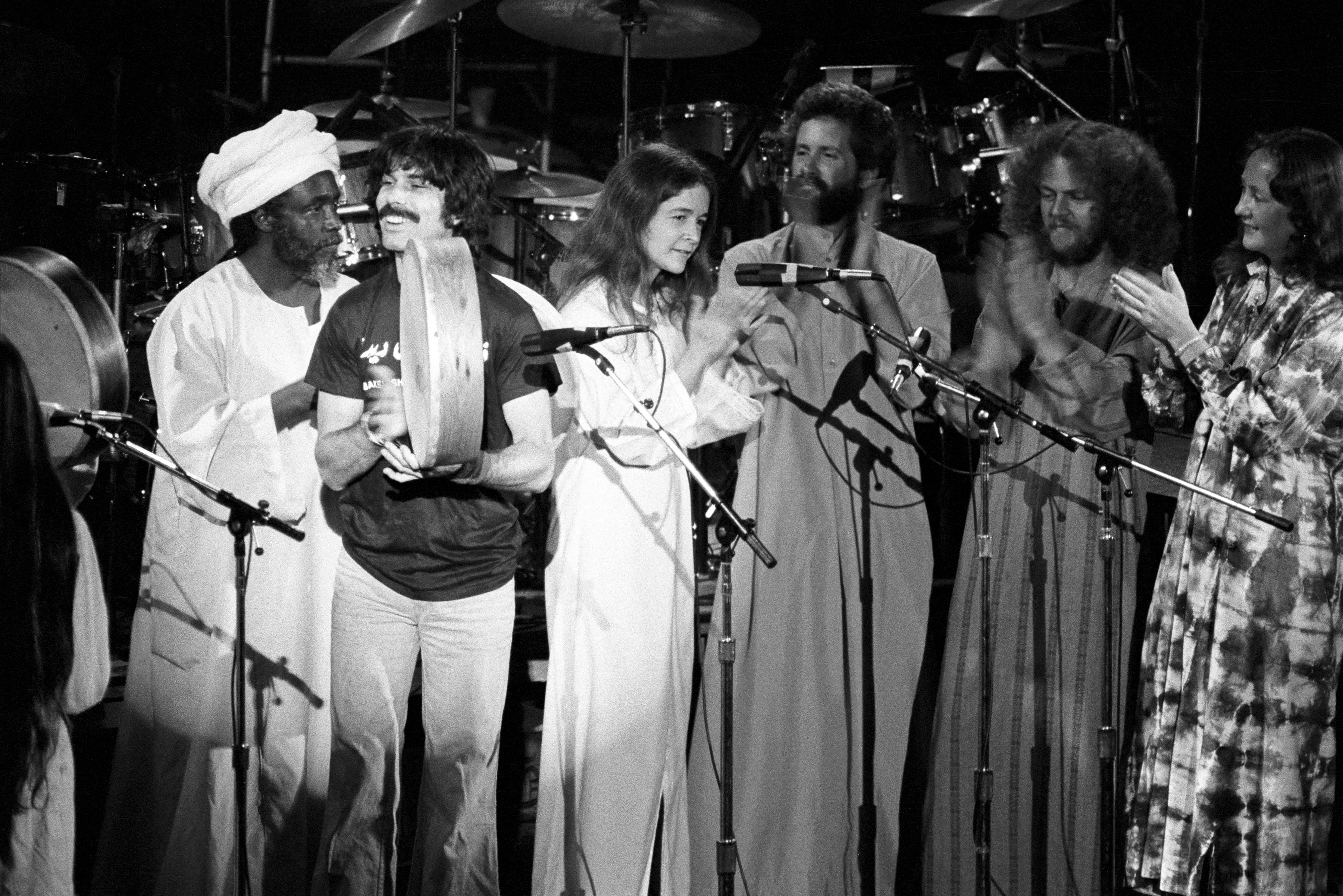 A rollicking New Year’s Eve show brought out the local Tower of Power horn crew for an all-R&B third set with Etta James, who rocked her signature “Tell Mama” and Jimmy Reed’s “Baby What You Want Me To Do.” But the peaks of the night, especially for veteran Deadheads, were the Pigpen staples: “Turn on Your Lovelight,” “In the Midnight Hour” and “Hard to Handle,” the latter arranged per Otis Redding’s original, brass braying and chortling alongside the band’s tweaky rubber funk while Etta shouts the hippies into 1983.

Coleman, the pioneering free-jazz saxophonist, bandleader and thinker, would seem a perfect fit for the Dead in light of his jazz-rock fusion work with his group Prime Time and his “harmolodic” approach to group improvisation. (Garcia even guested, in a low-key way, on Coleman’s 1988 Virgin Beauty.) His second-set guest turn with the Dead on their home turf was a pickles-and-ice-cream mix at points, Ornette’s alto venturing down harmonic culverts that could seem totally off-the-grid. But his refusal to merely “mesh” with the band in a conventional way is what makes this show so magical. The saxophonist carved head space of his own in “Space,” soaring and fluttering, then swinging into “The Other One,” wrestling the melody to a draw and destabilizing the flow nicely at a time when the band had a tendency to coast. His lonely ruminations on “Stella Blue” showed his tender side, and he got downright sentimental during “Turn on Your Lovelight,” blowing like the old Texas R&B honker he once was.

On this historic night, the Dead premiered “Dire Wolf,” a peek at the acoustic country-folk left turn they’d take the following year on Workingman’s Dead. But then it was back to dem ol’ kosmic blues, peaking with a fierce guest turn by Janis Joplin, who pops into a fully-lit 20-minute version of Bobby Bland’s “Turn on Your Lovelight” and takes it home in a sweaty tag-team with pal Pigpen, sounding like Otis Redding and Carla Thomas after a few rounds of Thunderbird and Spanish fly. “Got to get some!” shouts Pigpen. “I want to see . . . everything you got,” challenges Janis, with a wicked chuckle. And on it goes to a screaming finale, Garcia and Co. rocking the musical equivalent of grins that basically say, “Get those two a room already!” (Honorable mention: the “Lovelight” reprise at the Euphoria Ballroom in San Rafael on July 16th, 1970, in which the lovebirds make up what the song lacks in flow with boozy outbursts and risqué Patti Smith–ish ad-libs.)

Neither Dylan nor the Dead were at their best for this summit tour, and the resulting live LP (1989’s Dylan & the Dead) was a punt. But the rehearsal tapes had plenty of golden moments, ditto the shows. Philly was the best, song-for-song. Highlights: The band shouting along on a caffeinated “Tangled Up in Blue,” and Garcia — finally, after so many years! — sitting down at the pedal steel for some deliciously hallucinogenic honky-tonkin’. See “I’ll Be Your Baby Tonight,” where notes melt like soft serve in the summer sun. This show closed JFK Stadium — it was condemned by the mayor six days later. (Honorable mention: Giants Stadium in New Jersey two nights later, with a gorgeous cover of “It’s All Over Now Baby Blue” — a Sixties Dead staple — and Garcia back on steel for “Tomorrow Is a Long Time.”) 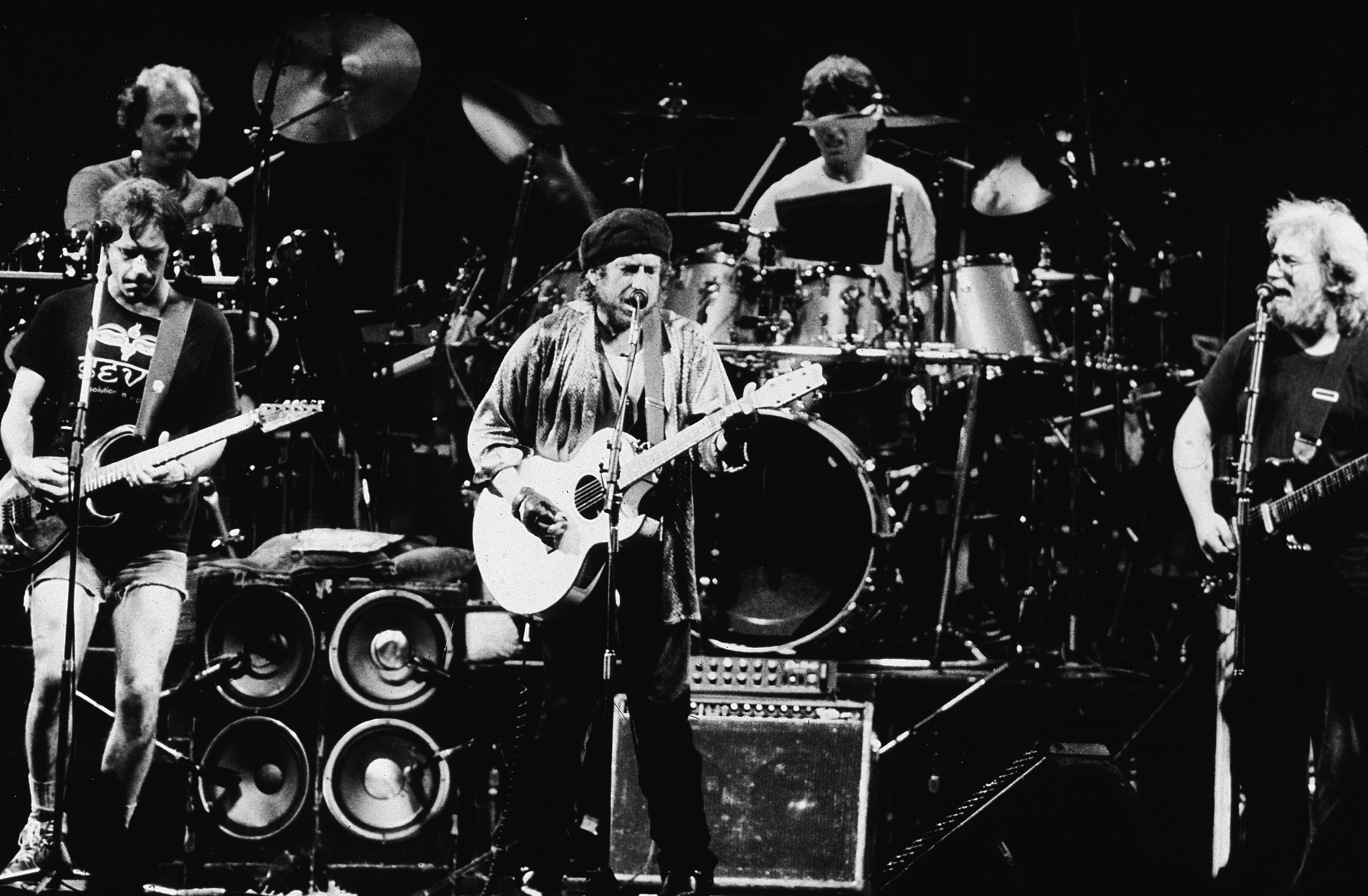 Saxophonist Branford Marsalis joined the band for its second set, and right off the bat, beginning on “Eyes of the World,” everything clicks. The A-list jazzman plays not merely like he’s listening closely, but like he’s fully decoded the band’s language, entering the conversation with his own voice, but in Dead accents. Garcia ripostes in one of his greatest latter-day performances, dropping in double stops and darting fills and generally rising to the occasion. By the time Marsalis is channeling Coltrane on “Dark Star,” you’ll be wishing he’d done a whole tour.

With Duane Allman and Fleetwood Mac’s original guitar wizard Peter Green sitting in alongside Garcia and Weir, the Dead’s journeys were epic this night. Add Gregg Allman on vocals and organ, his Allman Brothers Band bandmates, Love’s Arthur Lee on percussion and Mick Fleetwood dancing wildly in the wings, and you have the most impressively telepathic party ever captured on a Dead bootleg. Chaotic? Sure, at points, and it’s a shame that surviving tapes are spliced and incomplete. But the sound rings clear on an unusually bluesy “Dark Star,” guitarists circling like wild dogs, sniffing each other out. Then it opens into the rare “Spanish Jam,” one of the Dead’s jazziest workouts (inspired by “Solea,” the flamenco variation on Miles Davis’ Sketches of Spain), and builds to a supernova, eventually collapsing into a mighty 33-minute workout on “Lovelight.”