We were somewhere around Barstow on the edge of the desert when the drugs began to take hold. I remember saying something like “I feel a bit lightheaded; maybe you should drive. …” And suddenly there was a terrible roar all around us and the sky was full of what looked like huge bats, all swooping and screeching and diving around the car, which was going about 100 miles an hour with the top down to Las Vegas. And a voice was screaming: “Holy Jesus! What are these goddamn animals?”

Fear and Loathing on the Campaign Trail

Then it was quiet again. My attorney had taken his shirt off and was pouring beer on his chest, to facilitate the tanning process. “What the hell are you yelling about?” he muttered, staring up at the sun with his eyes closed and covered with wraparound Spanish sunglasses. “Never mind,” I said. “It’s your turn to drive.” I hit the brakes and aimed the Great Red Shark toward the shoulder of the highway. No point mentioning those bats, I thought. The poor bastard will see them soon enough.

It was almost noon, and we still had more than 100 miles to go. They would be tough miles. Very soon, I knew, we would both be completely twisted. But there was no going back, and no time to rest. We would have to ride it out. Press registration for the fabulous Mint 400 was already underway, and we had to get there by four to claim our soundproof suite. A fashionable sporting magazine in New York had taken care of the reservations, along with this huge red Chevy convertible we’d just rented off a lot on the Sunset Strip … and I was, after all, a professional journalist; so I had an obligation to cover the story, for good or ill.

Hear Tim Robbins as Hunter S. Thompson in Dramatized Reading of 'On Our Way Back to the Motel'

The sporting editors had also given me $300 in cash, most of which was already spent on extremely dangerous drugs. The trunk of the car looked like a mobile police narcotics lab. We had two bags of grass, 75 pellets of mescaline, five sheets of high-powered blotter acid, a salt shaker half full of cocaine, and a whole galaxy of multi-colored uppers, downers, screamers, laughers … and also a quart of tequila, a quart of rum, a case of Budweiser, a pint of raw ether and two dozen amyls.

All this had been rounded up the night before, in a frenzy of high-speed driving all over Los Angeles County – from Topanga to Watts, we picked up everything we could get our hands on. Not that we needed all that for the trip, but once you get locked into a serious drug collection, the tendency is to push it as far as you can.

The only thing that really worried me was the ether. There is nothing in the world more helpless and irresponsible and depraved than a man in the depths of an ether binge. And I knew we’d get into that rotten stuff pretty soon. Probably at the next gas station. We had sampled almost everything else, and now – yes, it was time for a long snort of ether. And then do the next 100 miles in a horrible, slobbering sort of spastic stupor. The only way to keep alert on ether is to do up a lot of amyls – not all at once, but steadily, just enough to maintain the focus at 90 miles an hour through Barstow.

One toke? You poor fool! Wait till you see those goddamn bats. I could barely hear the radio … slumped over on the far side of the seat, grappling with a tape recorder turned all the way up on “Sympathy for the Devil.” That was the only tape we had, so we played it constantly, over and over, as a kind of demented counterpoint to the radio. And also to maintain our rhythm on the road. A constant speed is good for gas mileage – and for some reason that seemed important at the time. Indeed. On a trip like this one must be careful about gas consumption. Avoid those quick bursts of acceleration that drag blood to the back of the brain.

My attorney saw the hitchhiker long before I did. “Let’s give this boy a lift,” he said, and before I could mount any argument he was stopped and this poor Okie kid was running up to the car with a big grin on his face, saying, “Hot damn! I never rode in a convertible before!”

The kid nodded eagerly as we roared off.

“We’re your friends,” said my attorney. “We’re not like the others.”

O Christ, I thought, he’s gone around the bend. “No more of that talk,” I said sharply. “Or I’ll put the leeches on you.” He grinned, seeming to understand. Luckily, the noise in the car was so awful – between the wind and the radio and the tape machine – that the kid in the back seat couldn’t hear a word we were saying. Or could he? 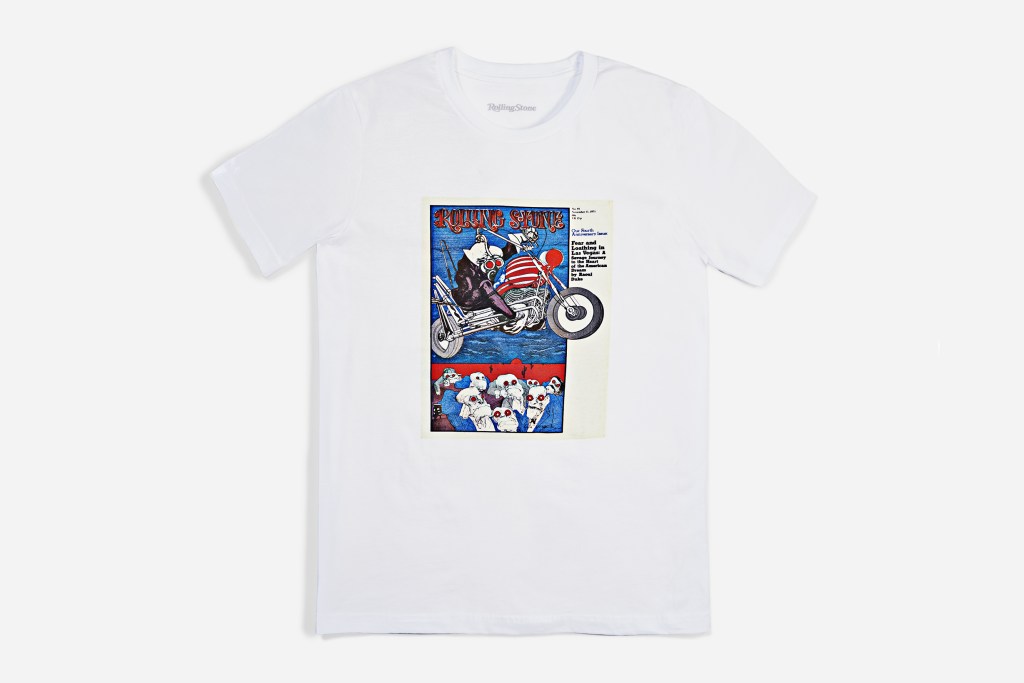 Hunter S. Thompson wrote “Fear and Loathing in Las Vegas” in 1971, and it solidified his brand of Gonzo journalism that became his trademark. This iconic cover features an illustration by Ralph Steadman, which forever linked him with Thompson in the minds of readers. “He had a devil in him,” Steadman said of the journalist. “And it excited the devil in me.”

How long can we maintain? I wondered. How long before one of us starts raving and jabbering at this boy? What will he think then? This same lonely desert was the last known home of the Manson family. Will he make that grim connection when my attorney starts screaming about bats and huge manta rays coming down on the car? If so – well, we’ll just have to cut his head off and bury him somewhere. Because it goes without saying that we can’t turn him loose. He’ll report us at once to some kind of outback nazi law enforcement agency, and they’ll run us down like dogs.

Jesus! Did I say that? Or just think it? Was I talking? Did they hear me? I glanced over at my attorney, but he seemed oblivious – watching the road, driving our Great Red Shark along at a hundred and ten or so. There was no sound from the back seat.

Maybe I’d better have a chat with this boy, I thought. Perhaps if I explain things, he’ll rest easy.

Of course. I leaned around in the seat and gave him a fine big smile … admiring the shape of his skull.

“By the way,” I said. “There’s one thing you should probably understand.”

He stared at me, not blinking. Was he gritting his teeth?

“That’s good,” I said. “Because I want you to know that we’re on our way to Las Vegas to find the American Dream.” I smiled. “That’s why we rented this car. It was the only way to do it. Can you grasp that?”

He nodded again, but his eyes were nervous.

Fear and Loathing in Las Vegas, Page 1 of 19