It sounds like a punch line: “There’s a new Grateful Dead documentary – and it’s four hours long.” But Long Strange Trip, directed by Amir Bar-Lev (The Tillman Story, Happy Valley) and executive-produced by Martin Scorsese, is no amiably noodling shuffle through a defunct band’s yellowed back pages. What the film chronicles, imaginatively and unflinchingly, is the flowering of an exuberant American counterculture – its triumph, its corruption and the toll exacted at either extreme – as viewed through the prism of a singular band of anarchists and their charismatic yet unwilling ringmaster, Jerry Garcia.

In structure and pacing, Long Strange Trip, which opens in theaters Friday, and then comes to Amazon Prime Video June 2nd, resembles a classic Dead show. Much of the first half presents familiar themes in discrete episodes, served up at a measured pace: Garcia’s childhood; the band’s unlikely coalescing; psychedelic hijinks and rustic retreats; and the tragic 1973 death of co-founder Ron “Pigpen” McKernan. The second half is more wayward and contemplative, with exploratory detours into the Deadhead experience and the tape-trading phenomenon, yet it builds inexorably to the band’s incandescent commercial peak before turning to Garcia’s harrowing decline.

The Dark Side of the Grateful Dead: Inside the New Doc 'Long Strange Trip'

Apart from a handful of startling omissions (no acknowledgment of drummer Mickey Hart’s self-imposed exile of 1971–74, no attention paid to keyboardists Tom Constanten and Vince Welnick and touring pianist Bruce Hornsby), Long Strange Trip is rich in detail, with voices representing all whose lives were touched by the Dead: members, crew, industry figures, intimates and fans. Complementing each segment with the perfect Dead tune, Bar-Lev deftly mixes new footage with vintage clips (some previously unseen) to provide a panoramic, enveloping experience. Here are 10 things we learned from Long Strange Trip.

1. Jerry Garcia was obsessed with Frankenstein.
“I used to draw pictures of the Frankenstein monster over and over, endlessly, in different positions,” Garcia says near the start of Long Strange Trip, his voice playing over a montage of his sketches. He recalls seeing Abbott and Costello Meet Frankenstein in 1948, one year after his father had drowned. Images and film clips from Frankenstein films recur throughout the documentary. The interview, taped for a television program called The Movie That Changed My Life, returns at the end of the documentary, providing closure. “It touched something, I don’t know what, something very strong,” Garcia says. “It might have been the thing of a dead thing brought to life. Frankenstein’s monster is, after all, a drive to reanimate, or to produce life, and it hit me in that archetypal center.”

2. Garcia’s formative influence was bluegrass banjo legend Earl Scruggs.
“My mother was an amateur musician, my father was a professional musician, so I grew up in a musical household,” Garcia relates in another archival interview. “But the first time I decided that it was something I wanted to do was when I heard … Earl Scruggs play five-string banjo. I fell in love with the sound, and I thought, ‘That’s something I have to be able to do.'” Color film footage of an impossibly young Garcia showing his pluck reveals that he was a quick study. “Bluegrass is conversational music – the instruments kind of talk to each other,” Garcia adds, citing a credo that he carried over into what would become the Grateful Dead.

3. The Dead achieved commercial success by going country.
Driven out of San Francisco by curiosity seekers intent on spotting hippies, the Dead sought refuge in the countryside, and their music soon grew to reflect the new setting: a shift seen in rare footage of Garcia, Bob Weir and Phil Lesh working out vocal harmonies for “Candyman” while strumming acoustic guitars. “When it came time to do Workingman’s Dead and American Beauty – that’s really kind of really one long record – I talked to the guys, said, ‘Why don’t we approach this one as though it were, like, a country & western record?'” Garcia explains in an archival interview. “Or California country & western, like Bakersfield. And why don’t we put more energy into the vocals, and making the vocals sound as good as they can, and not getting hung up on the instrumental surroundings?”

4. During an early TV appearance, the Dead dosed a cast of extras with LSD.
Confronted with unfamiliar, potentially awkward situations as their fame began to rise, the Grateful Dead weren’t above employing “LSD as self-defense,” as then-tour manager Sam Cutler put it. Such was the case when in 1969 the band was booked to perform on Playboy After Dark, a syndicated television show hosted by Hugh Hefner. “All the people who are at the party are extras, you know – they’re from central casting, and they’re sitting there with glasses of ginger ale,” Garcia relates in an archival interview. “It’s laid out like an apartment, but it’s a Hollywood soundstage, and there’s Hugh Hefner and all these melons. And the coffee pot got dosed, and the whole thing turned from an artificial party into an authentic party.”

5. Keith and Donna Godchaux decided one day to join the Dead – and did.
“We had been seeing the Grateful Dead whenever we could,” explains Donna Godchaux, whose husband, classically trained pianist Keith Godchaux, joined the band in 1971. “I came home one day and said, ‘Let’s listen to the Grateful Dead.’ And Keith said, ‘I don’t want to listen to it anymore; I want to play it.’ … And I said, ‘OK, let’s go get in the band.'” Donna, who would join the Dead herself as a backing vocalist in 1972, approached Garcia after a concert and announced, “Keith is your next keyboard player.” Soon after, he was. 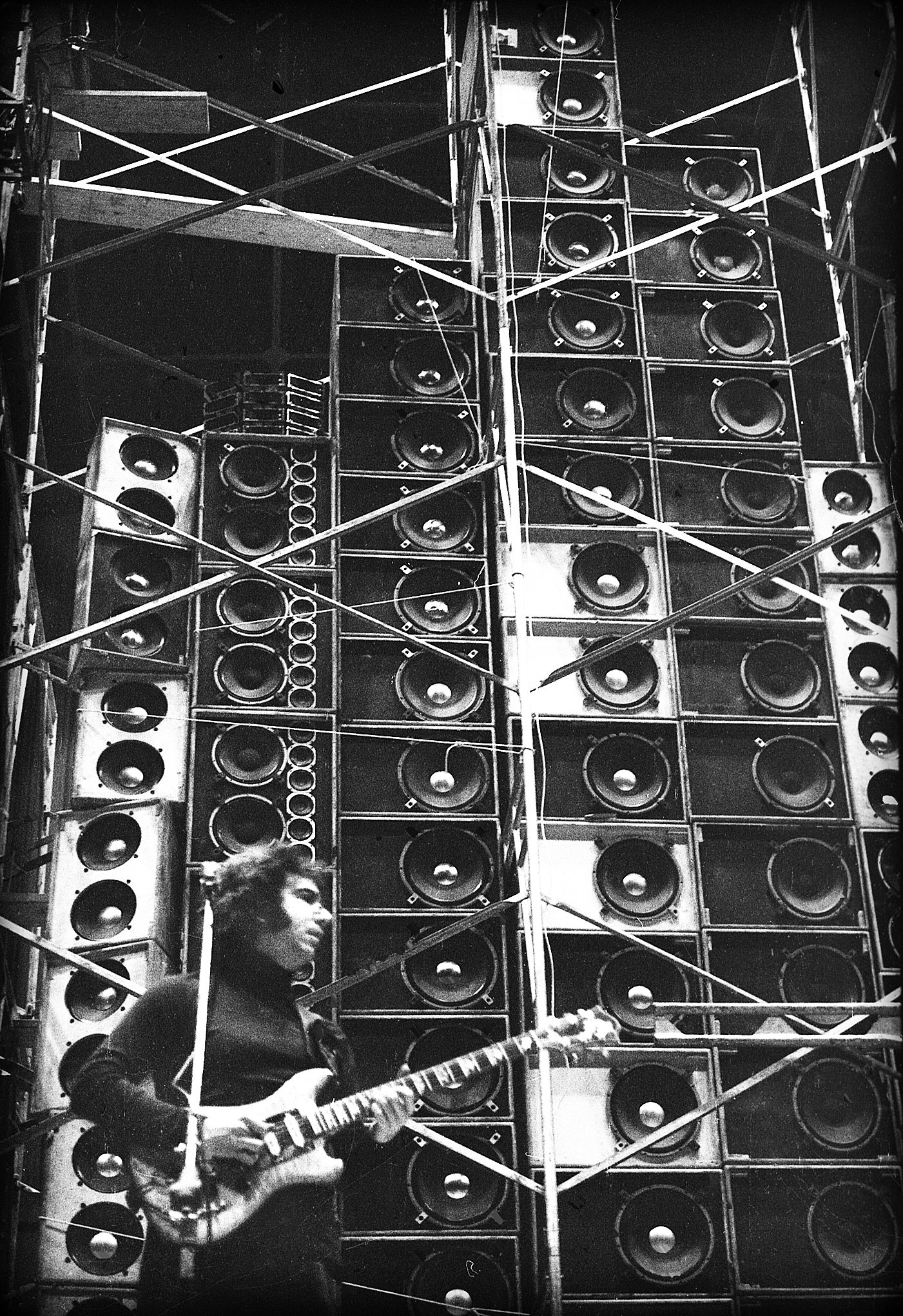 6. The Dead’s towering “Wall of Sound” PA system was designed by an LSD pioneer.
Owsley “Bear” Stanley, a fabled sound engineer and chemist whose special brand of acid fueled the Dead as well as Ken Kesey and his Merry Pranksters, became the group’s official soundman (and unofficial financier) starting in 1965. Asked in 1974 to produce a sound system powerful enough for the increasingly large spaces the Dead were playing, Stanley and his associates designed a towering rig that featured more than 500 speakers, plus noise-canceling parallel microphones, delivering clear sound for a quarter mile. “The Wall of Sound … I loved that thing,” Lesh says, laughing. “It was the best PA, ever. It was the best sound I can possibly imagine. And it was also the biggest – it was absolutely apocalyptic.” He should know; his bass stack alone was 32 feet tall. “It was like the voice of God,” he adds.

7. Two Dead factions, divided according to their respective drug of choice, clashed during the band’s fabled 1974 Winterland run.
Viewed at the time as a farewell engagement before a planned hiatus, the Dead’s October 1974 shows at San Francisco’s Winterland Arena were filmed for posterity as The Grateful Dead Movie. But behind the scenes, not everything was harmonious among the band members: Acid heads were feuding with cocaine enthusiasts. Rex Jackson, a stalwart roadie, took matters into his own hands, dosing everyone who took the stage. “‘Everybody who comes up these stairs, they’re gonna get acid,'” Steve Parish, another long-serving roadie, reports Jackson having declared. “‘They’ll just get LSD up the ass, and then they better fuckin’ behave.'”

8. Deadheads split themselves into a number of different tribes.
The diehard fans that followed the Dead from town to town were no uniform population. “The physical layout of a Grateful Dead show was like a mandala with different regions,” recalls Steve Silberman, a science journalist and longtime Deadhead. Denizens of the “Phil Zone,” he relates, positioned themselves to savor Lesh’s bass emanations, while in the “Deaf Zone,” hearing-impaired fans absorbed musical vibrations through inflated balloons while translators signed lyrics. “There was a whole crew of Wharf Rats, who were people following the 12-step path who would have meetings during the set breaks,” Silberman says. “Spinners would be out in the hall, having literally religious experiences, because they though Garcia was a prophet and they’d be bowing down.”

9. The Dead were hobbled by the enormity of their own success.
“Has success spoiled the Grateful Dead?” an unseen reporter asks Garcia in a clip from the band’s commercial peak, when the album In the Dark and hit single “Touch of Grey” had hit the charts. Garcia doesn’t hesitate: “Yeah.” Unanticipated popularity had prompted a move from arenas to stadiums, where newcomers elbowed in among diehard Deadheads. “Playing in the stadiums [was] akin to playing in the studio,” Kreutzman recalls. “There were 60,000 people there, but basically you didn’t have any touch with those people – they were hundreds of feet away from you.” And even then, the band couldn’t satisfy demand, a situation that led to members recording public-service announcements imploring fans without tickets not to loiter outside the concerts. “Jerry just couldn’t bring himself to do one of those,” Dead publicist and historian Dennis McNally notes ruefully.

10. Garcia considered stepping away from the Dead permanently in the Nineties.
Briefly reunited in 1993 with Barbara Meier, the former girlfriend who decades earlier had given him his first guitar, Garcia swept her away to Hawaii, took her scuba diving and proposed marriage. “I think he had been suffering for a long time under the weight and responsibility of this behemoth,” Meier says, relating a conversation in which Garcia mulled stepping out of the limelight. “I said, ‘Why don’t you?'” Meier recalls. She recounts his reply: “‘Do you know how many people are depending on this show going down the road?’ I understood in that moment that it was a machine by then. It wasn’t just a bunch of guys getting together and making music. This enormous community was demanding that he be the Grateful Dead’s Jerry Garcia.” Not long afterward, gripped anew by addiction, Garcia again dismissed Meier from his life. She never saw him again.