Nearly 100 years ago, on November 25th, 1920, the biggest, most important professional football game that no one knows about took place in Chicago. The American Professional Football Association may have been officially founded at a car dealership in Canton, Ohio in September 1920, but by all rights, the Windy City was its hub.

After all, this was a league made up of teams from Midwestern cities, and there was none bigger than Chicago, which had two franchises: the Chicago Tigers from the North Side and the Racine Cardinals – so named because they played in Normal Park, off Racine Avenue – from the South. They were competing in the same league, for the same fans and most importantly, the same dollars. But while Chicago was big, it wasn’t that big, they felt. So despite a 0-0 tie in their first matchup in front of 10,000 fans, the Tigers and Cardinals decided that one of them had to go. Their second meeting would carry with it greater stakes that moving up or down in the standings: The loser would have to fold their franchise.

Not even finish the season. Just pack up and go home. On Thanksgiving Day, no less. Great story, right? You bet – if it were true.

“It’s an urban legend,” says Ken Crippen, a football historian and former executive director of the Professional Football Researchers Association. “The Tigers were not a good team and they faced a lot of financial struggles – there was no way they could compete with the Cardinals. The Tigers folded because they couldn’t stay afloat financially, not because of the outcome of a game.”

The Tigers and Cardinals did play for a second time that season, but not on Thanksgiving Day – it was actually on November 7 – and certainly not for the loser-goes-home stakes that have been attached to the game. It was another showdown at Cubs Park (now known as Wrigley Field), where the Cardinals won, 6-3. Quarterback Paddy Driscoll scored the game’s only touchdown, on a 40-yard run, this time in front of a crowd of 7,000.

So why write a story about a game that wasn’t? Because sometimes finding out how an urban legend began is better than the urban legend itself. No one – even the historians – seems to know for sure where this tall tale got its start. Crippen has a theory that perhaps the story emerged from a promoter trying to drum up interest for a game involving a 2-1-1 team and a 1-2-1 team.

There was very little media coverage of the APFA at the time, with college football being the dominant fall sport. Box scores in the newspapers were generally the only record of a game. In fact, the write up of the second meeting in the November 8 edition of The Chicago Daily Tribune was a small, un-bylined story on page 15, totaling 217 words. So if the legend of Cardinals owner Chris O’Brien challenging Tigers owner Guil Falcon to a winner-take-all duel wasn’t true, there wasn’t anyone around to dispute it. Or care.

There is also another line of thought – and a more plausible one: Like Crippen says, the Tigers were going bankrupt and needed an excuse when they didn’t return for the 1921 season.

“The directions that both teams were going in were pretty clear, even in 1920,” says Joe Horrigan, executive vice president of the Pro Football Hall of Fame and the sport’s foremost historian. “So when they played that game, I’m sure there was talk that, ‘Only one team is going to make it in this town,’ and all of that, but I think it was just one of those things where one team wins and the other loses; it’s easy to think one won’t survive. And the Tigers were going broke anyway.”

The lie though has continued to live on even as the decades have passed.

Go to the Wikipedia page about the history of the NFL on Thanksgiving and you’ll find it listed as the first notable game. Go to the Tigers’ Wikipedia page and it’s there, too. (Though both pages denote its urban legend status.) There are articles written about it, regurgitating the lie to future generations. Even crazier? On the team history page of the Arizona Cardinals – descendants of the Racine/Chicago/St. Louis/Phoenix Cardinals – on the Pro Football Hall of Fame’s own website, the loser-leaves-town challenge is woven in with the real history of the club.

“I think it has to do more with people looking back,” Horrigan says of the myth’s continued growth. “That these were two teams that played each other, one team won and the following year, the other team was gone. I think that’s where it came from. Sort of a ‘Two-plus-two-equals-three’ equation.”

Oh, but this sordid little tale also has a third possibility for its origin: the Decatur Staleys.

That franchise had started when A.E. Staley, a food starch company 180 miles south in Decatur, organized a semiprofessional team to compete against the area’s pro squads. In the spring of 1920, Augustus Staley hired a young George Halas to be the team’s new player-coach and join the budding league. The Staleys finished in second that inaugural season and were a big hit throughout the league. 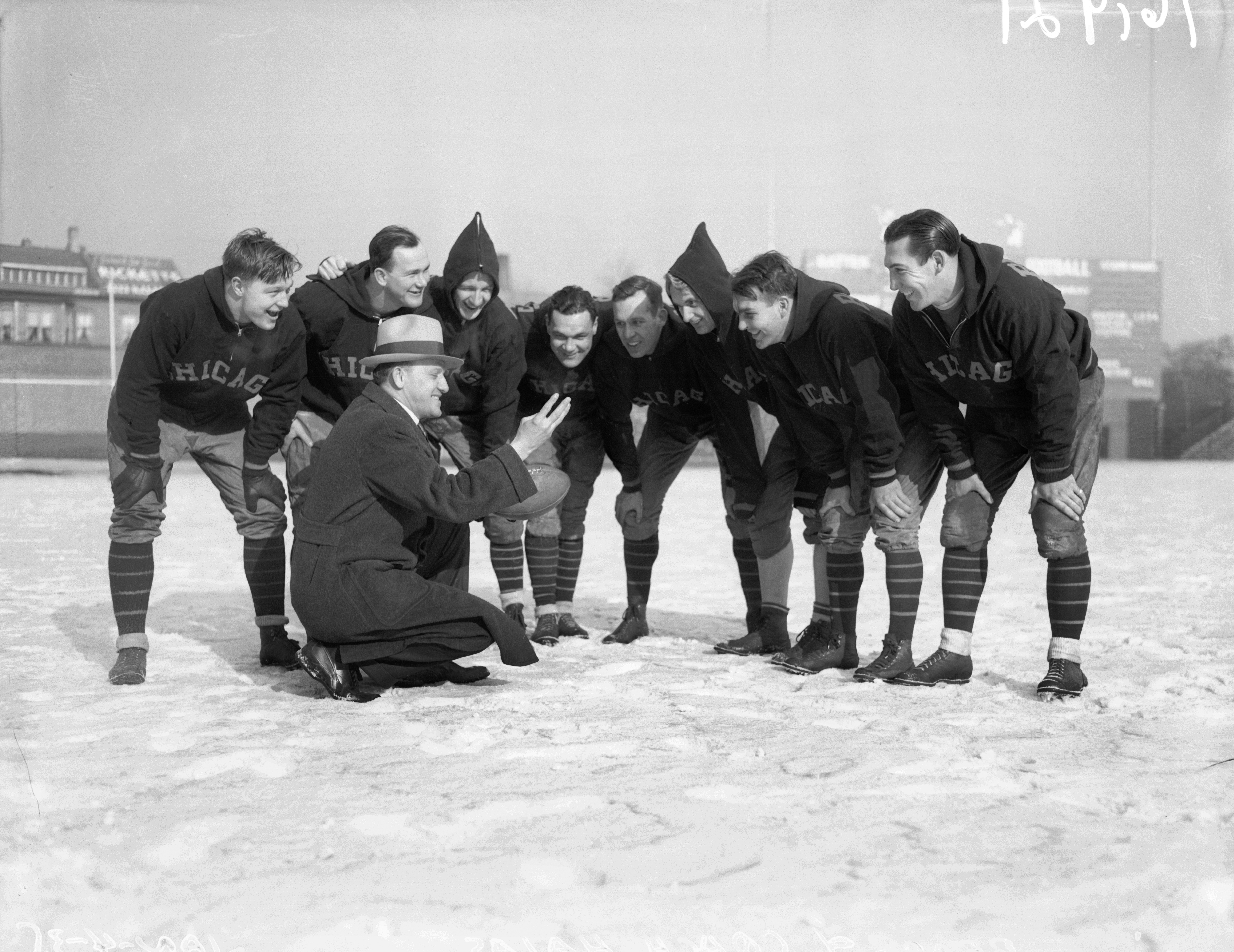 Halas knew that Chicago was ripe for the taking, so he convinced Staley that moving to Chicago was the smart play. (For his troubles, Staley not only gave Halas the franchise, but paid him $5,000 to get started, with the only caveat being he keep the “Staleys” name for one season.) The Cardinals had their own home field and would eventually move into Comiskey Park. The Tigers, on the other hand, played at Cubs Park – and couldn’t afford to stay there.

“They didn’t have any competition to use Cubs Park once the Tigers quit in the winter,” said Mark Sorensen, official historian for Macon County, Illinois and an expert in the history of the Decatur Staleys. “If I were Bill Veeck Sr., and I were looking for renters in the fall when the baseball team wasn’t playing – I guess you could say the stars aligned for Halas and the Staleys to use the park.”

Maybe Halas knew the Tigers were bad enough to lose to the Cardinals. (They finished near the bottom of the standings in 1920, with a 2-5-1 record.) His Staleys beat the Tigers twice that season, shutting them out both times. Maybe he knew that if the Cardinals lost a loser-go-home game, he’d be left with the weaker of the two teams to elbow out. Maybe he knew Chicago was big enough for just one team.

“Starting in 1921, the new president – he’d now be called commissioner – Joe Carr was putting teams where he felt it was essential,” Horrigan says. “He knew that in order to survive as a league, they needed to be in major cities. He was a former minor league baseball guy, so he was following that formula of putting teams in towns and cities that already had ballparks.”

And so, after the do-or-die game that didn’t take place on Thanksgiving, the Chicago Tigers finished the 1920 season losing two of their final three games. The franchise folded, disappearing the year before the American Professional Football Association changed its name to what we know it as today ­– the National Football League.

Racine stayed in, became the Chicago Cardinals and remained in Chicago until 1960. Halas was successful in moving the Decatur Staleys franchise north into the city after that inaugural season. In 1921, they played as the Chicago Staleys, winning the APFA Championship.

The next season, they changed their name to the Chicago Bears.