The analog vs digital music debate will continue until the end of time, but if you want to get the best sound from your vinyl, you’ll need to get an excellent turntable.

You’ll find the word “audiophile” thrown around a lot as a catch-all term for high-end audio gear, but it’s not about how much money you spend (although this gear can get pricey). The audiophile turntables we’re recommending in this guide are the result of meticulous engineering. You won’t find extras like Bluetooth support or USB ports, because those components aren’t in the service of playing vinyl.

Turntables are incredibly sophisticated devices. There are a lot of moving parts (literally), and each one needs to be calibrated properly to ensure you get the best possible performance. If the record moves just a little too fast or slow, you’ll end up hearing your music in the wrong pitch. If the tracking weight (the force of the needle pushing down on the record) is off, you risk damaging the grooves of your album, or having it skip if the needle is subjected to too much vibration.

These aren’t factors you need to consider when getting consumer level turntables, which to be clear can sound very, very good, because more basic equipment can’t produce sound so good that you’ll notice every little flaw. If you’ve invested in high-end speakers and amplifiers, these details will become apparent very quickly, and you won’t be able to un-hear them. If you want to make an investment in a turntable you’ll use for years (if not the rest of your life), you should consider any of the turntables below.

Amanda Gorman's Books Are Selling Fast Online, But You Won't Be Able to Read Them Just Yet

Are Bandanas Effective as Face Masks? It All Depends on How You're Wearing Them

What Are the Best Audiophile Turntables?

There are many factors to consider when choosing the right audiophile turntable for you; below are the most important ones, which we considered while we were researching this list.

Upgradability: All of the turntables we’re recommending in this guide allow you to choose your preferred needle and cartridge. Every needle will make your turntable sound different, and swapping them out can help you wring even more performance. Some cartridges are even preferable for certain types of records, this one from Ortofon designed to optimize the playback of mono records.

Preamp: A preamp amplifies the audio produced by a record player to an acceptable volume for music listening. Some turntables have one built inside, others require you to hook them up to an external preamp before connecting them to a stereo receiver or active (powered) speakers. Having a built-in preamp is convenient and takes up less space, but an external one is purpose built to do one job, and can be replaced or upgraded over time. Our guide feature a mix of turntables with and without a built-in preamps.

Speed Modes: All of our turntable recommendations can spin at 33/3 RPM (rotations per minute) and 45 RPM, so you can play full sized albums and singles.

Extras: As mentioned earlier, audiophile turntables are designed with one goal in mind: Playing records as well as possible. Instead of extras, these tables have been made using custom technologies that allow them to achieve this goal. You’re ultimate trading welcome bells and whistles for raw technical performance. 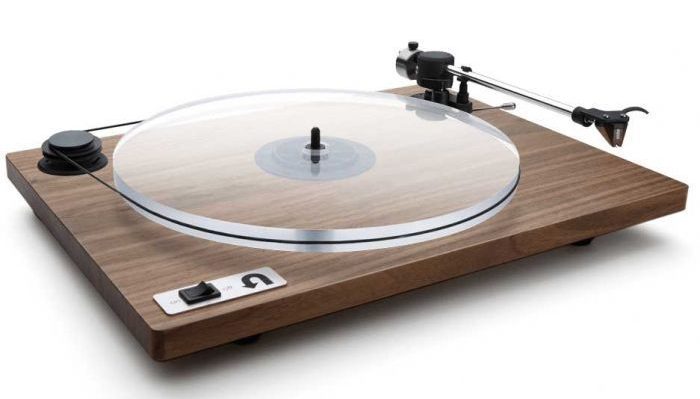 U-Turn Audio’s Orbit Special is the perfect audiophile turntable if you want your first taste of high-end gear. The Boston-based company sweat a lot of finite details, from what’s under the hood to its aesthetics, and actually makes the table in the United States.

The table’s plinth (the base that the platter sits on) is made out of a slab of actual hardwood, which makes the table feel solid. The choice of a dense material, along with the fact that the Orbit Special sits on three feet rather than directly on a surface, reduces the amount of vibrations that can reach the needle. Its platter (the piece your vinyl actually sits on) is made out of a thick piece of acrylic, which U-Turn says improves the turntable’s speed consistency for more accurate playback. The Orbit Special’s materials are not only functional, but they also make the turntable an attractive object to display.

One of the newest pieces of technology available on the Orbit Special is U-Turn’s second-generation tonearm. It uses a gimbal to allow the arm to move with less friction, which in turn allows the needle to move more freely. U-Turn also designed a heavier counterweight, so the Orbit Special is compatible with more phono cartridges. You can use any needle or cartridge you like, but U-Turn bundles this table with the Ortofon 2M Red, which is known for its solid all-around performance. Finally, the company designed a custom anti-skate mechanism that allows the needle to stay in the center of your record’s groove.

All of these technical details can be boiled down to this: U-Turn designed the Orbit Special from the ground up to make your records sound as good as possible. You can get this turntable with or without a built-in preamp that you can turn on or off by pushing a button. The version with a built-in preamp is a better choice if you’re building a home audio system from scratch, since you’ll have fewer components to worry about. You always have the option to use your own if you want to upgrade your gear down the line.

Entry-level and “audiophile” aren’t typically used in the same sentence, but U-Turn’s Orbit Special is a great exception to that rule. Whether you’re new to vinyl, or you want to upgrade from a beginner record player, this is the way to go. 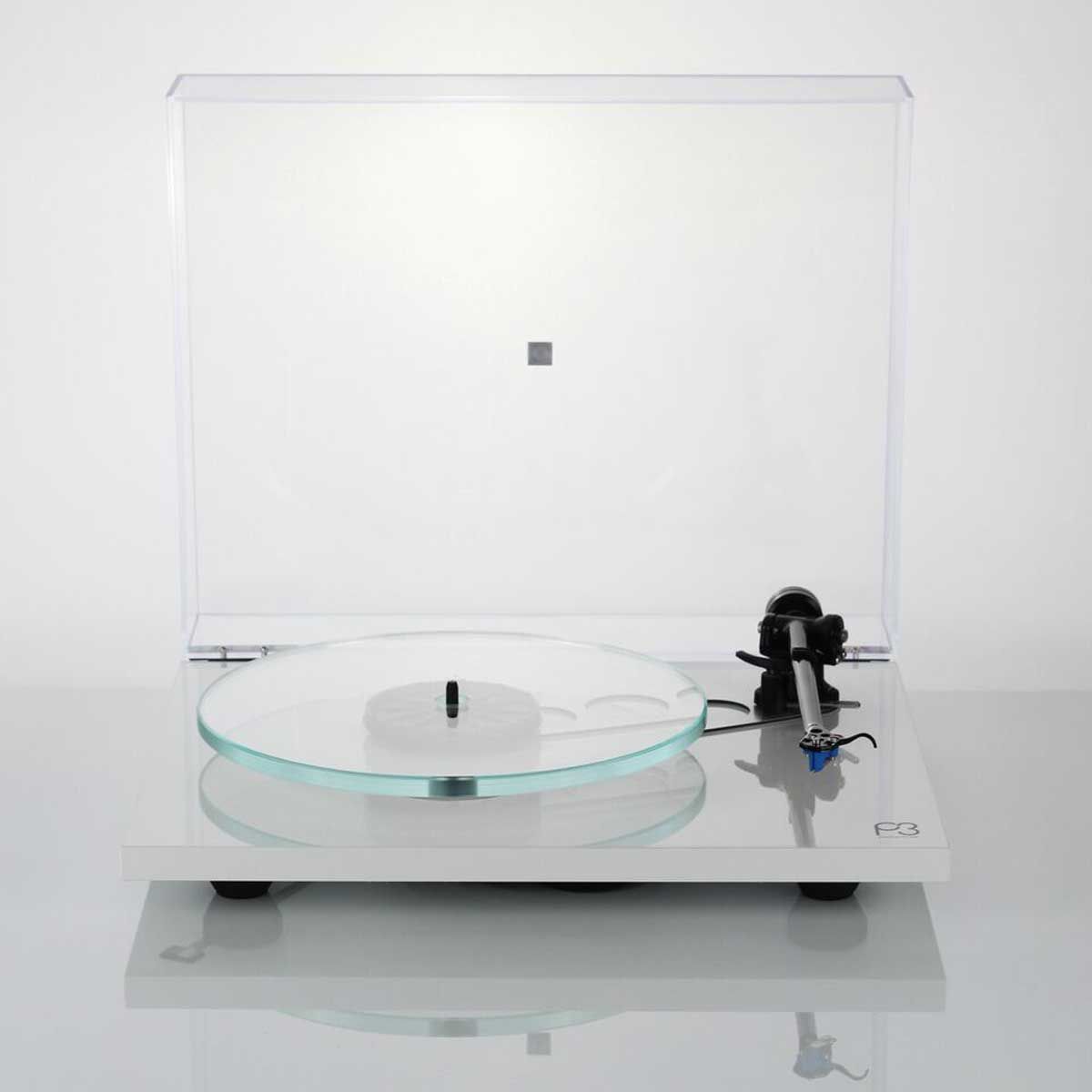 The Planar 3 is one of Rega’s mid-range turntables, but it’s the upgraded version of the record player I used for nearly four years. I’ve tested many turntables since then, and Rega’s has bested them all.

Rega’s big technical breakthrough was using a lightweight plinth and reinforcing it with a pair of braces (one above, one below), which keeps it rigid between the tonearm and center of the table. According to the company, this reduces distortion caused by vibrations that reverberate back through the table and those created by the table from the motor and platter, which need to spin to play your albums.

This updated version of the Planar 3 features a new tube-shaped tonearm that Rega developed to redistribute its weight as it moves along your record. This reduction in friction allows the needle to stay inside the groove of your vinyl for increased fidelity. Rega also redesigned the Planar 3’s feet to further reduce distortion caused by vibration, and they improved its motor’s circuit board for better speed accuracy.

This turntable’s platter is half-an-inch thick and made out of glass, and its sub-platter (the piece the platter sits on, which rotates so the record spins) was made stiffer, which Rega says improves its accuracy. Rega doesn’t include a phono cartridge with the Planar 3, but the company recommends pairing it with the Elys2. Audio Advice allows you to get that cartridge and turntable combo as a bundle.

The second-generation Planar 3 builds upon a solid foundation Rega established with the first version, which was released in 1977. The turntable has been refined over and over, and the end result is audiophile gear with a rich history and excellent performance. 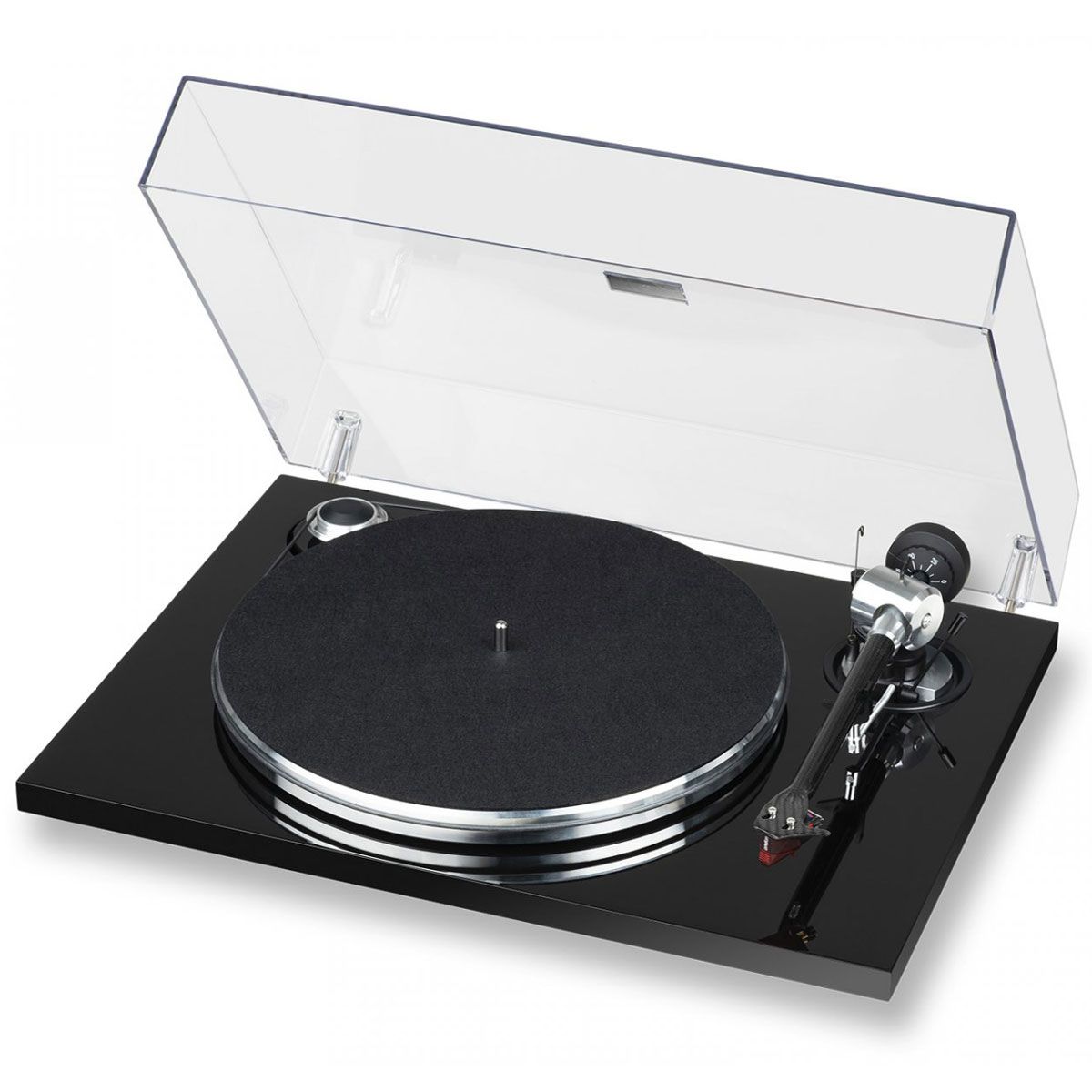 EAT (European Audio Team) strived for “neutral sound” and a “timeless design” when assembling its Prelude turntable, and they went to great lengths to achieve them.

The company took what it learned from making its highest-end decks and applied the same principles to this table. The company uses a heavy-weight aluminum platter and stainless steel bearing, which it says results in smoother and more precise movement. The result should be records that spin at exactly 33/3 or 45 RPM. Its plinth is made out of MDF (Medium Density Fiberboard) covered in eight layers of lacquer, which EAT points out is far more high-end than the particleboard and veneer many other turntables use.

Like U-Turn, EAT opted to create a motor system that’s detached from the board (you can see it in the upper left-hand corner of the plinth), to eliminate any unwanted vibrations from reaching the needle. The company created its tonearm tube out of a single piece of resonance-free carbon, which is lightweight and can move easily when playing vinyl. Its counterweight was designed with a “anti-resonator damper,” which means it keeps the weight of the cartridge and tonearm from pressing down on the vinyl too hard, since that can cause it to create unwanted frequencies that can reduce the overall quality of your music. EAT has bundled the Prelude with an Ortofon 2M Red cartridge, but you can pair it with any cartridge.

Like Rega’s Planar 3, EAT’s Prelude is a turntable that owes a lot of its performance and design to the company’s other record players. Its standout features come down to material choices and technical engineering that look complicated on paper, but ultimately result in more accurate sound. 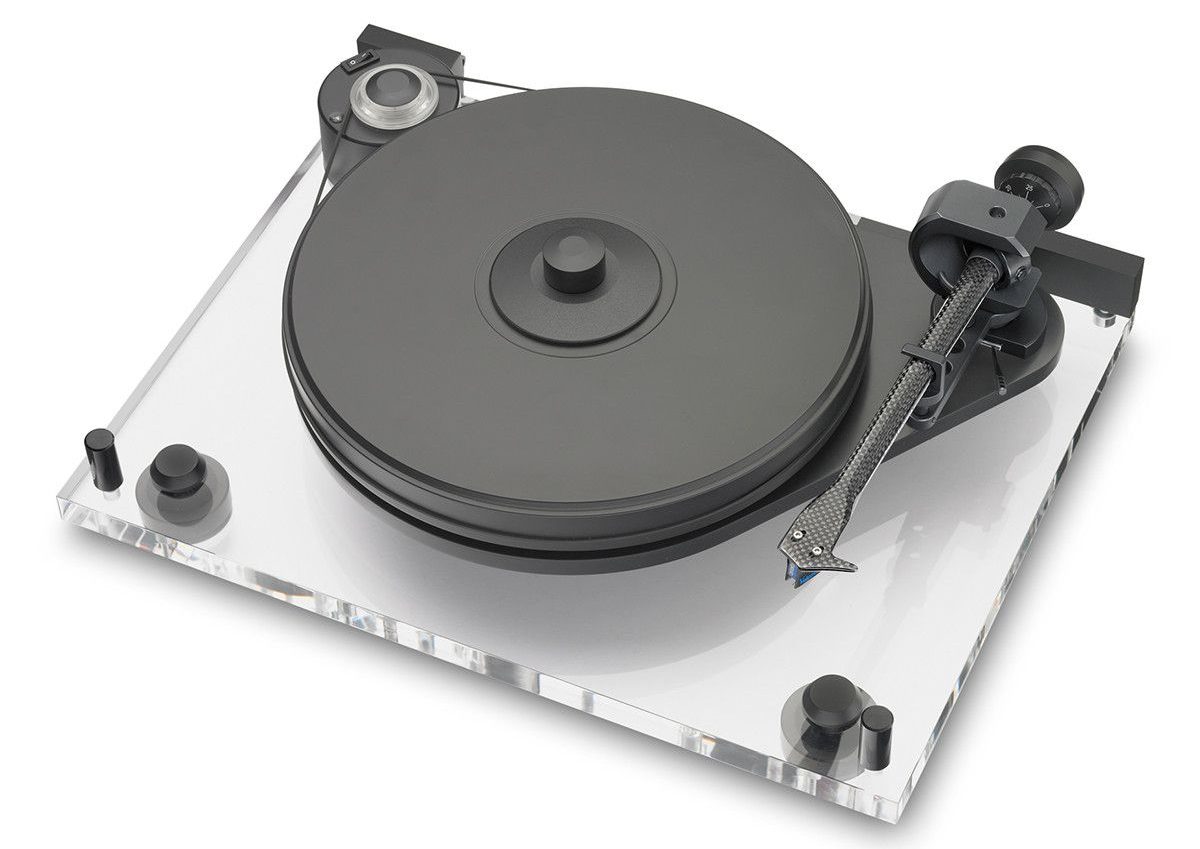 Pro-Ject’s 6Perspex SB is an audiophile turntable that’s use of science helps maximize its performance.

Its plinth is made out of transparent acrylic, and is balanced on three height-adjustable legs that can compensate for a slanted surface. The legs are made out of thermoplastic elastomer and aluminum to reduce vibrations. Pro-Ject doubled down on this by suspending its sub-chassis on three magnetic fields, which it says reduces the amount of noise that gets transmitted from the motor through the rest of the turntable. The motor itself is driven by AC power, but uses a DC-driven controller that keeps its speed consistent.

The 6Perspex SB’s platter is made out of a mix of vinyl and MDF (medium-density fibreboard), and includes a metal record clamp. The purpose of a clamp is the keep your vinyl perfectly flat while you’re playing it. Any movement — left and right, up or down — can cause the needle to slip, bend, or bounce. This may not cause a pronounced skip, but it will create some audible distortion through high-end amps and speakers.

Pro-Ject doesn’t bundle every 6Perspex SB with a needle, but they recommend pairing it with a Quintet Blue cartridge. It also suggests picking a cartridge that weighs between five and 14 grams if you use your own. Regardless, the needle you choose will be attached to the 6Perspex SB’s “9cc Evolution” carbon fibre tonearm that Pro-Ject says avoids standing wave reflections (the result of two sound waves crashing into one another). Again, the audible degradation will be pretty minor, but it’ll be amplified by the calibre of your equipment.

By applying principles of physics — like magnetism — and accounting for technical issues such as standing wave reflection, Pro-Ject’s 6Perspex SB can allow you to hear even the finest details of your record collection.