The tabloids’ banner headlines about Abbie Hoffman’s death seemed somehow appropriate; he wasn’t the type to do anything quietly. If you have never heard of Abbie Hoffman, the best way to describe him is as Morton Downey Jr.’s polar twin. Hoffman, too, was a lot of mouth and provocation and media manipulation – but he was always on the side of justice, compassion and nonconformity.

Abbie Hoffman was a professional thorn, and there was none sharper. Like many of his compatriots, he saw that the world was an unfair place run by repressive hypocrites, but he was almost alone in using humor to point this out – a recent photo showed Hoffman in a T-shirt that said, My Country Invaded Nicaragua… & all I Got was This Lousy T Shirt – and in maintaining his ideals throughout the counterrevolutionary Reagan era. A few weeks before his death, Hoffman was still protesting – in a downpour – in behalf of Satanic Verses author Salman Rushdie.

'The Trial of the Chicago 7': The Sixties Told in Sorkinese

How to Watch Mike Tyson vs. Roy Jones Jr. Online

It was a revelation to learn that Hoffman was 52 when he died; that means that when he was wearing an American-flag shirt, nominating a pig for president and warning the world not to trust anyone over thirty, he was already over thirty himself. He claimed to have been “born” in 1960, at his first demonstration — against the death penalty. He would also help register poor blacks in the South and sprinkle dollar bills over the New York Stock Exchange before becoming a national figure as one of the founders of the Youth International Party (Yippies), which helped organize the protests that rocked the 1968 Democratic National Convention.

Some argued that Hoffman and his fellow agitators scared America into electing Nixon. But the infamously clownish conspiracy trial of the Chicago Seven — Hoffman, Tom Hayden, Jerry Rubin, Rennie Davis, David Dellinger, John Froines and Lee Weiner — before the archconservative Judge Julius Hoffman (whom Abbie accused of being his illegitimate father) did help catalyze the mistrust of authority that helped end the Vietnam War and Nixon’s presidency. Attorney Weinglass: Would you state your name? Witness: My name is Abbie. I’m an orphan of America.

Attorney: Where do you reside?
Witness: Woodstock Nation.
Judge: What state is that in?
Witness: The state of mind. It’s a nation of alienated young people which we carry around with us in our minds, just as the Sioux Indians carried around the Sioux nation in their minds.

In Eighties parlance, Hoffman was a great adman for the revolution, a wellspring of catchy slogans and graphic images: His threats to levitate the Pentagon and dump LSD in the Chicago water supply were much more wacky and memorable than the usual lefty rhetoric, and thus more effective. Only Hoffman could have written books called Revolution for the Hell of It, Fuck the System, and Steal This Book (although the writing in the last, it turned out, was appropriated somewhat from other authors). 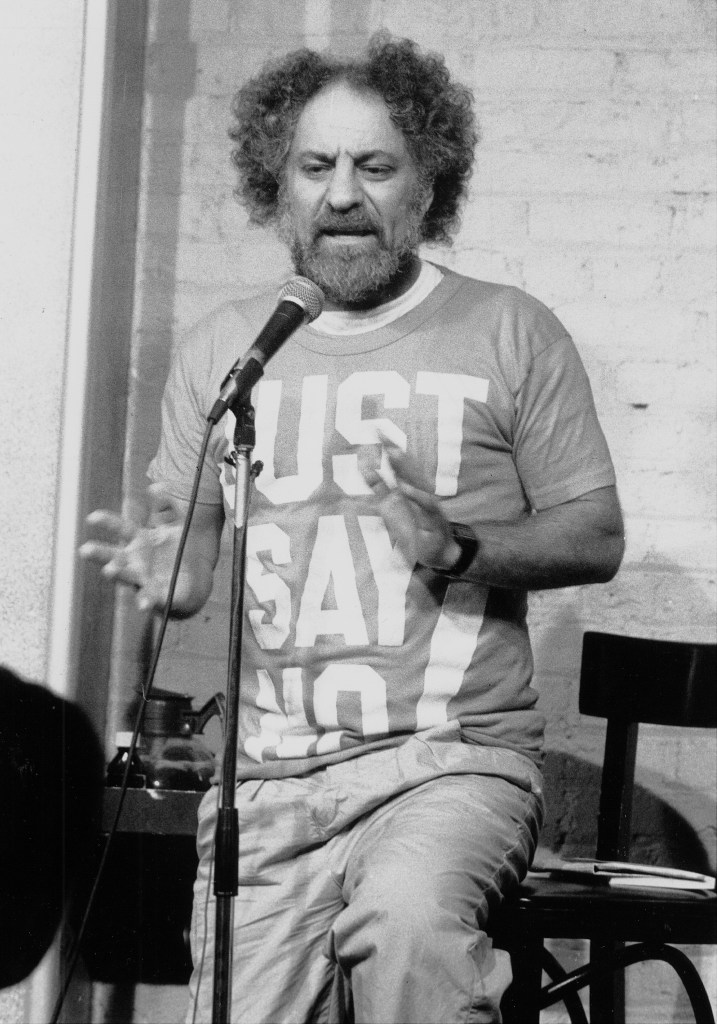 And only Abbie Hoffman could have turned his fleeing a 1973 arrest for dealing cocaine into a mythologizing fugitive existence, in which he supported himself by writing — and, as Barry Freed, galvanized communities into ecological activism and became a hero all over again. The only problem was, after Vietnam ended and Watergate proved him correct, the world moved on and the product Hoffman had been hawking was suddenly no longer in demand. But Hoffman never gave up, continuing to point out evils in employee-urine testing and nuclear proliferation.

“His protests newer meant that he didn’t love his country,” wrote a cousin, New York Newsday columnist Sydney Schanberg, “for he did, passionately. He worshiped its freedoms that made possible his public struggles against government’s stupidities and venalities.”

Some say Hoffman, a manic-depressive, was despondent about his finances, recent car-accident injuries and lack of recent successes. Yet his cheery commitment contributed to the mobilization of a generation, and his cogent arguments and scathing satire live on. Two years ago, at the last of his dozens of protest trials (this one for trying with Amy Carter to block CIA recruiting on campuses), Hoffman asserted: “Democracy is not something you believe in or a place you hang your hat, but it’s something you do. You participate. If you stop doing it, democracy crumbles.”

At Christmas time, Hoffman visited his former book editor Christopher Cerf, who was recording a demo for a song he wrote for Sesame Street’s Oscar the Grouch called “Get Mad.” Hoffman cheerfully sang along on the choruses. On April 12th, he was found in his bed, having taken 150 phenobarbitals — enough to kill 15 men. Some of his devotees contend that it couldn’t have been suicide, because Hoffman would have left a book’s worth of explanation; others, of course, would say he was the victim of some CIA plot. His longtime lawyer Gerald Lefcourt says it was a consequence of Hoffman’s being a manic-depressive, because he had stopped taking his medication, feeling “it dulled him, destroyed his creativity.” The name of the Pennsylvania town in which he died was New Hope.

This story was originally published in the June 1, 1989 issue of Rolling Stone.