History will not long remember that Andre Drummond and Will Barton – two players capable of truly impressive dunks – even competed in the 2016 Verizon Slam Dunk Contest. When the books are written, they will be mere footnotes to the glorious double-overtime, Double-Live-Gonzo showdown between Zach LaVine and Aaron Gordon.

Last year, the Timberwolves’ LaVine put on a show that was going to be hard to top – a set of dunks so far ahead of the rest of the 2015 field that his only real competition heading into this year seemed to be himself. Luckily for all of us, the Magic’s Gordon (and his friend Stuff) weren’t about to let him coast to another title.

Here’s a look at their back-and-forth battle, and a dunk contest for the ages.

Zach LaVine, First Dunk
A relative, certainly, of his dunks from last year, but still the kind of thing that has Shaquille O’Neal and Tracy McGrady picking their jaws up off the floor. At 6-foot-5 and 190 pounds, LaVine manipulates his lithe frame in midair in ways that seem not so much impossible as simply unattainable by mere mortals. There’s a balance and poise to LaVine in midair that’s Michelangelo-esque: a human expression of the divine. The ball passes around his back so quickly it’s liquid, and then he moves it horizontally toward the hoop with such speed and precision as he’s descending that it’s nearly moonwalking.

With his second dunk, LaVine took off from the foul line and caught an alley-oop from teammate Andre Miller, needing two tries to finish it and earning him a 49 from the judges ­– the only blemish on his way to scoring 299 out of a possible 300 for the night.

For his part, Gordon produced two dunks clearly good enough to get him into the second round: a between-the-legs reverse and another between-the-legs dunk, this time snatched off of Magic mascot Stuff’s head in a variation on John Wall’s winning dunk from two years ago. Neither fully prepared us for what came next.

Aaron Gordon, Third Dunk
This dunk is ultimately going to get less attention than the one that followed it because it’s less impressive from a technical standpoint…but boy, was it beautiful. The idea of having Stuff spinning on the hoverboard was a precisely perfect prop touch that managed to up the ante without seeming gimmicky. Gordon’s ability to seamlessly incorporate the Karl Malone touch of holding his hand behind his head while also whirling the ball in a full circle was likewise flawless and then the dunk itself was delivered with power, which is perhaps the one thing LaVine’s dunks lacked.

I mean, just look at this kid’s face: 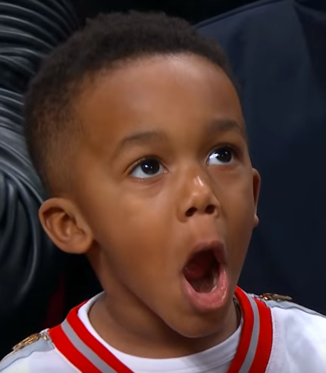 LaVine’s response dunk was similar, although with a little more grace and a little less raw power. And then Gordon upped the ante with what was the most purely impressive dunk of the night.

Aaron Gordon, Fourth Dunk
How does one even begin to explain this? This dunk enters the realm of the absurd. It is the “Le Sacre du printemps“ of dunks. People should have been rioting in the streets. At first, having Stuff step off the hoverboard seems to be a dumb move – but then, something happens that can’t be explained. Later on, discussing it with other writers at the postgame it seemed almost impossible to make sense of. Under BOTH legs? What? How? Ultimately, this felt not so much like a new standard being set, the way that J.R. Rider going through the legs has led to EVERYONE going through the legs, as every standard being thrown out the window. This was the monolith from 2001: A Space Odyssey.

LaVine’s response was fitting, a pure distilled essence of what makes his particular vision of dunking so intoxicating.

Zach LaVine, Fourth Dunk
Again, no contortions, no impossible geometry, just flight. Yes, it makes an immediate impact in real time, but it reveals itself fully only in slow motion, in the way his legs drift to the right, whirling in a kind of counterpoint to his right arm’s action as it makes its circuit. LaVine’s dunks are great not precisely for their degree of difficulty (although who else could do this?) but because of some faintly graspable perfection in them. Listen, the best steak you’ve ever had probably wasn’t the best because of the sauce or the spices, but because of the barely definable balance of flavors within the cut itself. LaVine’s dunks have, in short, umami.

And that should have been it. Two rounds, four dunks each, but they were tied and, furthermore, no one wanted it to end. And so we went to the dunk-off.

Gordon opened the extra session with another perfect 50 of a dunk, scissoring his legs and throwing down an off-the-backboard, two-hand windmill reverse that made Shaq look like this: 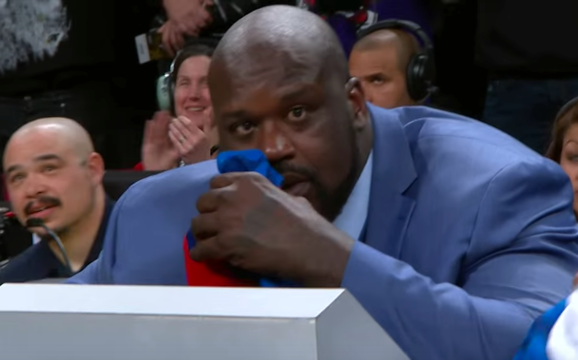 LaVine responded with his own two-handed reverse, this one from behind the backboard and through the legs. Another 50 from the judges, making the sixth straight 50 in a row from these two, a first for the dunk contest. The official scorers page from the NBA itself ran out of boxes at this point: 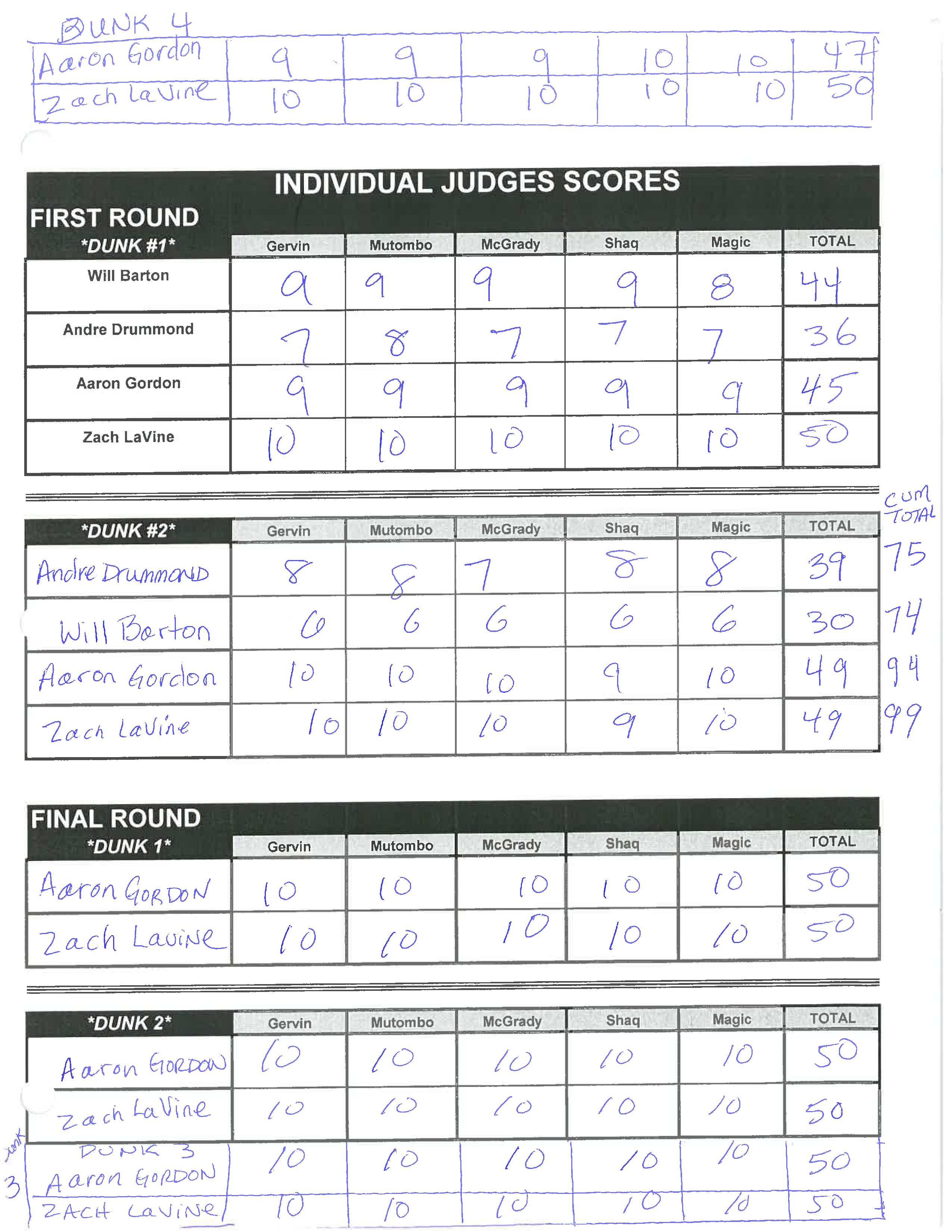 This was Grendel and Beowulf, Hector and Achilles, evenly matched but opposing forces fighting a war of attrition. Someone eventually had to succumb just so they could play the actual All-Star Game the next day, and unfortunately it was Gordon.

Aaron Gordon, Sixth Dunk
Frankly, this was an incredible dunk that Gordon rightly assessed in his press conference as being “kind of hard to see without a replay. It’s kind of very quick; it happens quick.” What he pulls off is fully cocking the ball behind his head and then fully cocking it down at his feet before slamming it. Ironically, the dunk has more in common with some of LaVine’s slams – more predicated on a straight-line push of the possible rather than the powerful and physical. Rightly, this should have been yet another 50, but that difficulty of apprehension combined with fatigue got him a 47.

LaVine finished with one he didn’t even know he could do.

In the end, neither of these guys should have won or lost, something LaVine copped to as he accepted the trophy. There have been unbelievable individual performances in the dunk contest (LaVine last year, Vince Carter in 2000) and there have been great battles ­­– between Michael Jordan and Dominique Wilkins, even between Jason Richardson and Desmond Mason – but there’s never been anything like this. In the moment, at the arena, everyone there would have been fine with watching LaVine and Gordon do this until the sun collapsed in on itself and ended life everywhere in the universe. We all would have died happy.