It feels silly to describe a player who’s about to be a first-ballot inductee to the Basketball Hall of Fame as “under-appreciated,” but if anyone fits that description, it’s Yao Ming. Ask your average basketball fan about the Houston Rockets center, who is to be inducted into the Hall of Fame this weekend, and you’ll probably hear about two things: his height (a towering 7’6″, which places him fifth on the list of the all-time tallest NBA players) and his nationality. You’ll hear significantly less about his game.

There are plenty of those who’ll argue that he doesn’t deserve his place in the Hall, let alone to be inducted at the first opportunity. (Google “Yao Ming Hall of Fame” if you don’t believe that). The arguments against him are that his career was relatively short (he spent only eight seasons in the NBA) and that he was often injured. If Yao was American, people argue, he’d have a hard time qualifying with that record. This may or may not be true, but Yao’s induction comes at the behest of the Hall’s International Committee, who choose one inductee a year, and if you can find another player who’s eligible this year and also happens to be the best ever from a nation of over a billion people, let me know. In any case, those arguing his NBA career doesn’t merit this recognition are doing Yao a disservice, because while his career was short, it was also great, because he represented the last flourishing of a certain type of basketball. So perhaps the best way to remember what make him special is this: he’s the last truly great back-to-the-basket center we’ve seen in the NBA.

Why It's Time to Stop Asking Allen Iverson About 'Practice'

The game has been evolving steadily away from the days when, unless you happened to have a certain Michael Jeffrey Jordan on your roster, a dominant center was the ticket to success – as recently as the ’90s, the league’s best teams were built from the middle out, with the likes of Patrick Ewing, Hakeem Olajuwon, Shaquille O’Neal, David Robinson, Alonzo Mourning and Dikembe Mutumbo doing battle under the basket. These players were defensive forces, clearly, their intimidating presence discouraging opposing wing players from daring to venture into the paint. But the very best of them – Ewing, Olajuwon, O’Neal and Robinson – were also offensive lynchpins.

The apogee of the inside-out offense was probably the two finals series played while Jordan was off playing baseball in 1994, Olajuwon’s Houston Rockets beat Ewing’s New York Knicks in seven games, and a year later, they swept O’Neal’s Orlando Magic to claim back-to-back titles. Jordan came to his senses the following season, stopped playing baseball, the Bulls won 72 games and the league’s dominant centers were again relegated to his long, long shadow.

As the Bulls were tearing up the NBA to claim their second three-peat, on the other side of the world a lanky teenager was taking the first shaky steps in his career. The 17-year-old Yao Ming had been playing for the Shanghai Sharks’ junior team for four years before he finally broke into team’s senior roster in 1997. His rookie season was promising, if not spectacular, but it was cut short by a broken foot, an injury that didn’t bode well for the rest of his career. On his return, though, he developed into a dominant force, so much so that by his fourth and final season in the Chinese League, when his Sharks finally won the Championship, he averaged a jaw-dropping 38.9 points and 20.2 rebounds during their playoff run. 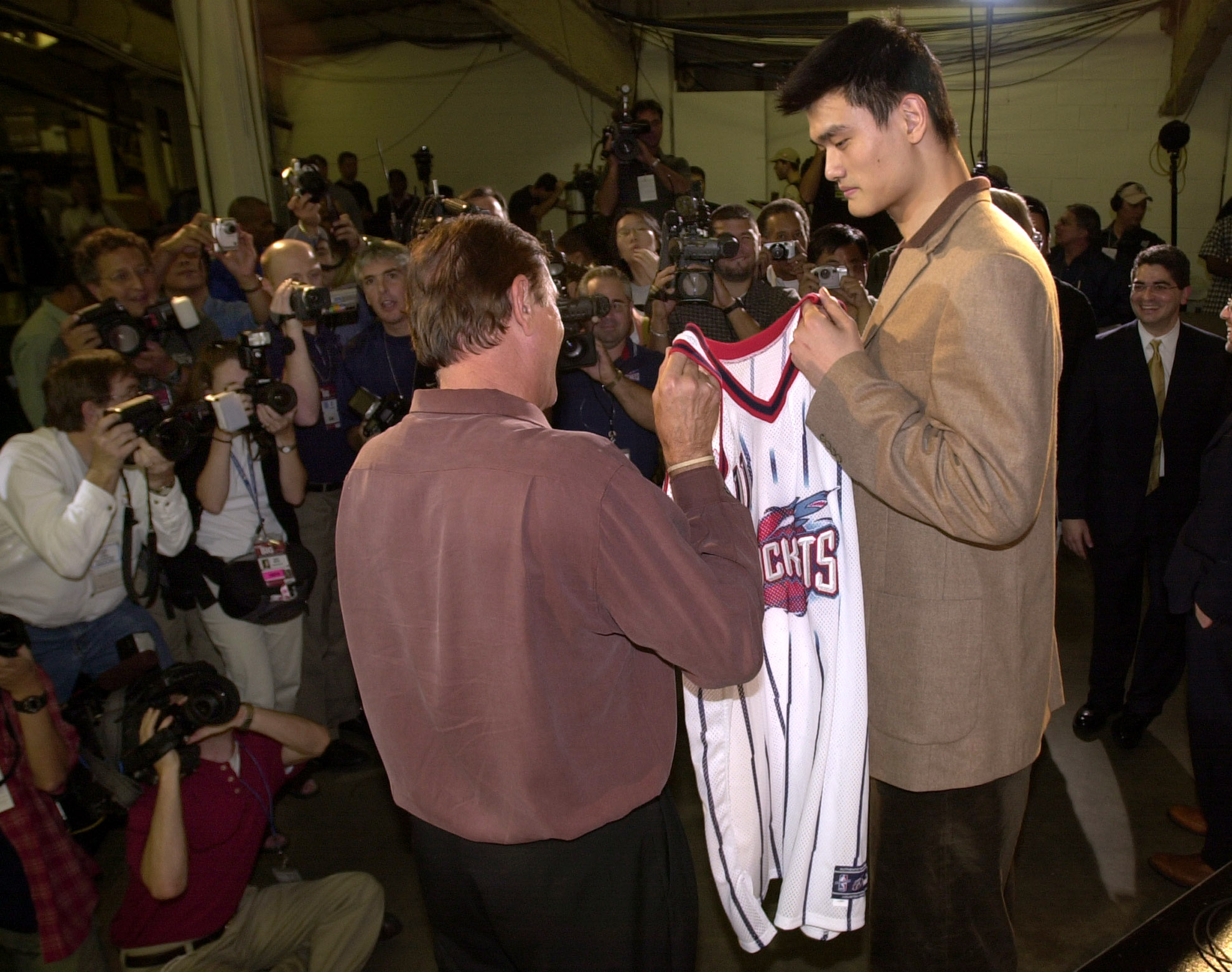 He came to the NBA in 2002, a time of transition. The game’s dominant player of the era was Spurs power forward/center Tim Duncan, who won the second of his back-to-back MVP awards that year, but it was the athletic and versatile Tracy McGrady, who led the league in scoring (and would later be one of Yao’s teammates), that looked like the prototype NBA player of the future. Ming took a while to find his feet, but in 2003, the arrival of coach Jeff Van Gundy marked a change in his fortunes – Van Gundy installed an offense that looked remarkably like the one that the Olajuwon-centric Rockets had used so effectively a decade earlier, parking Yao in the post and letting the offense run through him. It worked.

It’s here we arrive at what made Yao so special. In the NBA, players over about 7’3″ have often been – with the occasional exception, of course – at best one-dimensional and at worst something close to novelties. Their sheer size has made them defensive presences – it’s hard to drive to the basket when you’re confronted with a guy who’s so tall his head is shrouded in fog – but none of them had anything resembling Yao’s all-round game. Sure, he blocked a lot of shots and grabbed a lot of rebounds, but it was his offense that made the Rockets so effective. He had a formidable array of post moves. He was a clever passer, from both the high post and the low, and he was inventive.

It wasn’t to last, of course – Yao’s size put an awful lot of pressure on his feet, and after 2005, he was plagued by the stress fractures that’d eventually end his career. Like any game, of course, basketball moves in cycles, and last year analyst Zach Lowe suggested that we may yet see a return to the era of dominant big men. But for now, Yao remains the last of his kind, a towering reminder of the way the game used to be.