SummerSlam is advertised as the biggest party of the summer, but the 2016 edition was more like a family reunion: most of the faces were familiar, there were some new additions you hadn’t met yet, and a few surprises that made it memorable. Instead of a drunk uncle urinating on the carpet, however, what we got were a couple of high-profile victories at the hands of the company’s most successful imports from Japan, as well as a reminder that the more things change, the less Brock Lesnar cares. There were no real duds on the card (aside from that short Miz and Apollo Crews match that I had already forgotten about), which is more than you can say for this year’s other huge show, WrestleMania 32, but it also didn’t capture the imagination.

A handful of the matches played it safe, choosing consistency over the chance to do something we would talk about for years to come; especially disappointing was the fact that we didn’t even get Roman Reigns vs. Rusev in the hossiest hoss fight this side of Sheamus and Cesaro (which was great, if unfortunately overshadowed by virtue of being a pre-show match). At the end of the night, we had had a few surprises, sure, but the lasting image will be Randy Orton’s busted open head, a symbol for the show as a whole: a chaotic mess that looked better on paper than it was in reality.

5. SummerSlam Debuts Were Hit-or-Miss
A handful of superstars made their official SummerSlam debuts last night, and let’s just say they didn’t all go as well as a certain demon’s did (more on that in a bit). Aside from the new Universal champion, the future stars of the WWE could have, as a whole, had a better first impression. Enzo and Cass riled up the crowd to open the show before going down to the Troll Squad that is Chris Jericho and Kevin Owens. Apollo Crews took a pretty boring L to The Miz, continuing Apollo’s run of being pretty boring in general. AJ Styles…well, we’ll get to him, but he definitely lived up to his side of the bargain.

The Club, on the other hand, got distracted by Jon Stewart and “won” by disqualification against The New Day, continuing that penis-related feud for at least another month. Hooray. And finally, Carmella fell victim to the returning Nikki Bella’s dope new finisher, which means her counterpart Alexa Bliss did pick up a win (and hopefully, some new fans, because her facial expressions were at a high level in Brooklyn). If this year’s SummerSlam was supposed to highlight the new era of the WWE, it failed everywhere except at the top.

4. Charlotte and Sasha Recover From Near-Disaster
This could have been so, so bad. Early on in the most-anticipated Women’s Championship match since WrestleMania, Charlotte went to do…something to Sasha Banks in the corner, but she dropped her on her back and neck instead. The Boss was visibly hurt in the aftermath, but props to both women for not only recovering from the botch, but also using it to accentuate the story of the match. Charlotte tweaked her normal approach in favor of trying to break Sasha’s back for real, while Sasha took a lesson from Rusev in selling on offense, even letting go of the Banks Statement once because of her back.

While we can’t be sure of what the original match looked like, the urgency after the botch made every move look twice as dangerous and, therefore, twice as riveting. There’s a reason that WWE trusts these two to go out there and put on a 15-minute match at the second biggest show of the year; they just “get it.” For evidence, rewatch Sasha countering what was going to be a murderous top rope Razor’s Edge into a beautiful Frankensteiner. Then rewatch it again and again. Even though the result might have been disappointing (why put the belt on Sasha only to have her lose it pretty clean a couple of weeks later), the match went from a near-tragedy to a master class into rolling with the punches. 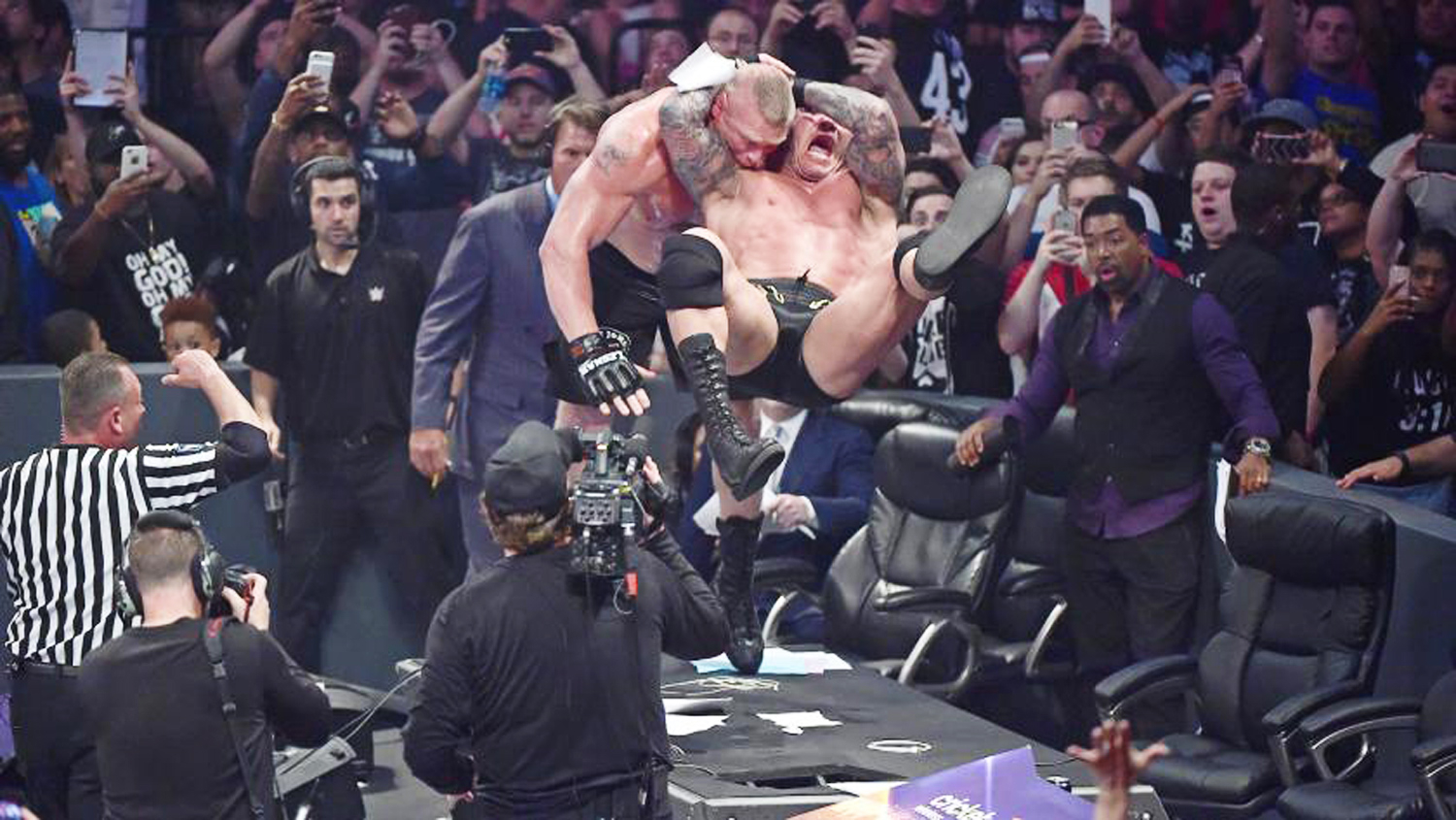 3. All Hail AJ Styles
Quick: when was the last time John Cena lost two singles matches in a row, clean or not, to a single man? Before last night, you’d have to go back to 2011 and the Summer of Punk for your answer, but there’s a new savior in town, and his name is AJ gosh-darn Styles. The Phenomenal One and The Face That Runs the Place stole the show with a 20-minute classic full of everything that makes Cena great (false finishes, melodrama) and everything that made Styles the best wrestler in the world (fluidity, a wonderful sense of timing, and the Styles Clash). Cena’s face said it all when AJ Styles kicked out of the Super AA from the top rope, aka John’s Fatality. That’s the moment when fans started to believe that this wouldn’t just be another great match that #CenaWinsLOL; no, this one deserved a different hashtag, one that the leader of The Club would appreciate: #BeatUpJohnCena.

That’s just what he did; countering an AA into a Styles Clash before, wisely, foregoing the pin in favor of the Phenomenal Forearm for the 1, 2, 3. After the match, we were also treated to the more human side of John Cena, who reminded us that a) he’s not a cyborg and b) he’s getting old. The ritualistic way he left behind his Never Give Up armband might mean nothing (and almost certainly it does not mean retirement), but if anything, it seemed to be Cena the Character catching up to the truth that Cena the Person already knows: his time is up, their time is now.

2. A Tale of Two Titles
Ever since the brand split occured and we found out there would be two heavyweight titles, one for Raw and one for SmackDown Live, I had been wondering which title match would steal the show at SummerSlam. As your humble blue brand recapper, I was hoping it would be Dean Ambrose and Dolph Ziggler, who had the better build to the biggest party of the summer. Unfortunately, I bet on the wrong horse here; Finn Balor and Seth Rollins blew them out of the water. Partly, that’s because Ambrose and Ziggler played it extremely safe, with the biggest moments being a series of awkward counters and not-believable false finishes. The problem is that neither of the two can make their offense look like it hurts all that much, so when a movable object met a stoppable force, we all lost.

Don’t get me wrong, it was a fine match, but the drama and intensity did not match what happened in the first-ever Universal Championship match. A quick note before diving into that: the new Universal title might be the worst belt WWE has created since the Divas Championship. It looks like strawberry jelly, or a reject from Iron Man’s closet. That’s a shame, too, because the match was the exact opposite of that, starting from the Demon King’s first entrance at a marquee event in WWE. The two traded kicks and flips and slingblades and all sorts of power moves, trying to put away the other and claim the new belt. Rollins continues to get better and better, pacing his counters pefectly and even busting out his old indie finisher, God’s Last Gift. But this was Balor’s night, as he not only won the title a month after his debut, but he did it in style; one of the complaints I’ve always had about the Demon is that he wrestles the same, just more overpowered. Last night, though, he took a beating and altered the rhythm of his signature moves, looking more aggressive than ever. Whether it was the right call to put the strap on him so soon will have to be seen (how long before the so-called “internet fans” turn on him for this push?), but for one night, the Demon King ruled supreme.

1. Randy Orton Died For Brock’s Sins
Brock Lesnar needs a new gimmick, because Suplex City reached its nadir at SummerSlam. It’s not just the suplexes, either, but the fact that he has been built up to be so brutal and invincible that all of his matches are either squashes or end in dumb shenanigans. Forget the fact that Lesnar busted Randy Orton open with what looked like a misplaced elbow; that’s just par for the course for Lesnar. It’s the fact that he so clearly doesn’t give a shit about planning a match that tells a story. It’s just “suplex, repeat, brief comeback from opponent, suplex, F5, collect paycheck,” and frankly, we’ve all had enough.

For his part, Orton did the best he could, busting out a beautifully painful RKO on the table in between beatdowns from Lesnar. The best moment of the match was the RKO nearfall in the ring, which I bought as the finish because I am a dumb man. In the end, however, there was no Viperville to be found for Orton; there was just elbows to the face, a pool full of blood, and a lost by technical knockout. If this was planned, Orton is a crazy man, but if it wasn’t, maybe this will be the moment that gets Lesnar back to the wrestler we all like, instead of the walking UFC tie-in.