What is in the water at the SmackDown Live catering table?! Following a relatively subpar (and completely exhausting) SummerSlam that especially did not live up to its potential on the blue brand side of things, we’re back to the stellar Tuesday evening offering that we’d become accustomed to since the brand split. The opening 10 minutes set the table perfectly for the brisk two hours that would follow; four key storylines were organically advanced (AJ Styles and Dolph Ziggler, the tag division, the women’s division, and Heath Slater’s everlasting free agency), and we even got the introduction of the two titles we’d been hoping for for over a month. That’s right, SmackDown Live has its own tag and women’s titles, and they are both beautiful (and much better than the new Universal Title over on Raw).

So now, just one episode after the last pay-per-view, we are on our way to Backlash, the inaugural SmackDown Live special coming in three weeks. A variety of different programs are already in place, with some intriguing ones in the mix (Randy Orton vs. Bray Wyatt could be the feud that kickstarts both of those dudes’ floundering momentum, although The Viper gets some props for allowing himself to be turned into a bloody mess on Sunday). If we keep building at this pace, Backlash could be the do-over SmackDown Live needs after SummerSlam’s disappointment.

5. Mean Girl ‘Mella
Not only did the women of SmackDown Live get a new, awesome title, they also got their first bit of real character development (if you don’t count Eva Marie’s ring announcer/narrator as character development). One of the best moments from SummerSlam was the return of Nikki Bella, whose very real and very scary neck injury was threatening her career. She picked up the win with a dope new finisher that actually makes her boyfriend Cena’s AA look like trash, all over poor Carmella, who had been having a hard time finding her way since moving up without Enzo and Cass. Well, last night, the Princess of Staten Island went full warrior mode, attacking Nikki from behind not just before their scheduled match, but also on Talking Smack (the post-show on the WWE Network) afterwards. It’s an interesting double turn, because while Nikki Bella is infinitely better as a heel, she can work as a face, while Carmella needed SOMETHING to get her going. She can be a star; she’s got the looks, the lineage, and the charisma, but trying to make her into Lady Enzo was never going to work. This, though…this we can work with.

4. Tyler Breeze Should Be a Star
Wrestling tournaments are almost always a lot of fun, and through half of round one, the new tag titles tournament for SmackDown Live has delivered. Well, mostly. In the first match, the Usos faced off against the Ascension. I’m not going to waste words on an Usos/Ascension match, so here: The Usos won by jumping a lot. But the second match, between superheroes American Alpha and the most underrated team in the land, Breezango, carried a shocking amount of intensity and drama. Part of it is that American Alpha looks so dominant that any dent in their armor amps up the excitement by 300 percent, so when Breezango took control with a few false finishes thrown in, you could feel Jason Jordan and Chad Gable amping up their game on the fly.

The other, more important part, however, is that Tyler Breeze is an incredible professional wrestler. He was matching Gable and Jordan move for move, and even had a believable fakeout with a supermodel into a 2.9999 count. We all figured out that Breeze could go during his late-period NXT run, when he was having great matches with everyone thrown his way; towards the end of his developmental stay, there was no one more worthy of the NXT title than Breeze. As one of WWE’s homegrown guys, he gets the style and substance of the beats the company wants its wrestlers to hit, and no amount of bad booking on the main roster has taken that away from him. With the brand split, Breeze is exactly the type of guy that should get a shot with a meaty program; let’s hope they realize what they have with him.

3. Heath Slater’s Incredible Journey
Not to sound like a broken record on these recaps, but Heath Slater is everybody’s jam right now. After interrupting the opening segment to *ahem* “request” a spot in the tag team tournament, Heath set about to find a partner to enter with him; while my heart said Samoa Joe, my brain immediately went to Rhyno, which ended up being the correct choice, after trolls from the Miz and, pleasantly, Arn Anderson of Four Horseman and wicked spinebuster fame. Since the stipulation for Slater to be added to SmackDown Live permanently is that he needs to win the whole tournament, we can either expect this free agency story to continue OR WWE might actually pull the trigger on one of its most dependably hilarious workers. Either way, we all win. Especially Heath’s seventy-something kids. 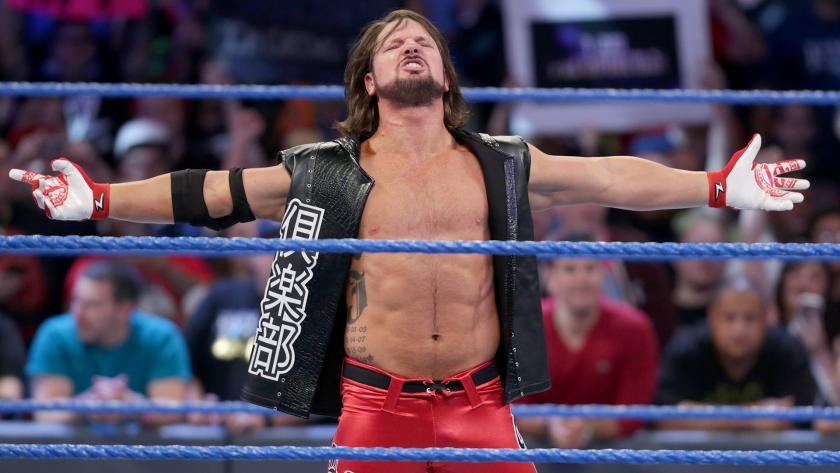 2. The New Face That Runs This Place

AJ Styles has been on fire since joining the WWE; after his extremely well-done debut at the Royal Rumble, he has moved smoothly from a feud with Chris Jericho to a title program with Roman Reigns, before transitioning into a heel role against John Cena, in a feud that he actually won, no questions asked. So it makes sense that Styles, whose in-story character is nothing if not practical, wants a title shot at Backlash. Of course, because he’s a southern bro who loves to put himself above everyone else, Styles can’t help but mock a defeated Dolph Ziggler, leading to a series of sneak attacks by the Show Off in retaliation and a main event match to determine the title match at Backlash.

Quick note: the booking here is excellent; Daniel Bryan comes out and agrees with Styles that he’s the number one contender, but he also gives beloved babyface Dolph a chance to fight his way into that match as well. It gives Styles motivation to win (one-on-one is easier than triple threat) without making his claim to the top invalid. The match itself is great, even if you couldn’t expect Ziggler to win and be in two title matches in a row. Styles didn’t lose a step since leaving the indies for the big show (not The Big Show), and if he manages to get fun, great matches out of both Dolph Ziggler and Dean Ambrose in the same month, they should induct him into the Hall of Fame immediately. As much as we love Ambrose here, Styles as champion is exactly the right move for SmackDown Live until some massive babyface (*cough Shinsuke Nakamura cough*) comes along to take it back.

1. BONUS: The Miz Cuts the Best Promo of 2016
It’s like that you do not watch Talking Smack, the post-show for SmackDown Live on the WWE Network, but you need to watch The Miz’s promo from last night’s episode. Mike flipping Mizanin went supernova on poor Daniel Bryan, who made the mistake of calling out Miz’s wrestling style and Intercontinental reign to date. Really, it was the “you wrestle like a coward” line that sent The Miz off on a promo that blurred the line between scripted drama and all-too-real poison barbs. Not only did Miz call Bryan a coward for not wrestling after promising the fans to return from his neck injuries, he also went for the Yes! Man’s so-called love of wrestling. You can see the moment Daniel Bryan’s heart breaks right when Miz mentions the bingo halls of his past.

This type of moment (and it is A Moment, not just a throwaway promo) is exactly what makes wrestling compelling; a blur between outrageous fiction and the very real physical dangers that these performers put themselves through. Whether it was scripted to the letter or whether The Miz went too far and legitimately made Daniel Bryan walk off the set while both Renee Young and Miz’s own wife Maryse tried their hardest to keep up with the spectacle of it all. You can argue that this type of promo crosses the line (although Miz is a heel and Daniel Bryan might be the most popular personality in WWE) or that it should have aired on the blue show proper, but what can’t be denied is that this is not just a vital promo at the hands of the second biggest title holder on SmackDown Live; it was a career-defining moment for one of WWE’s most loyal and hard-working performers.