Hello, wrestling fans and foes and welcome once again to a recap of the show at which no one should turn up its nose. And no, I’m not talking about The Night Of. The dramatic extravaganza I speak of happens every Monday like clockwork for three-plus hours on the USA Network, as it has with little interruption for nearly 25 years. So where was I? Ah, yes. We have a new Universal Champion – the second in as many weeks, cause that’s the weird way life in WWE has shaken out post-draft. And Triple H is back and snarling more than usual. But for those of you unraveled by all this volatility, there was always more beef between Titus O’Neil and Darren Young and the latest in Cesaro and Sheamus’ playoff. And Bayley’s a unicorn now and Dana Brooke’s sort of in the Bullet Club. Kind of. Anyhoo, and without further backstage interviewing by Tom “Don’t Call Me Tom” Phillips, here are the five key insights (in addition to the usual accompaniment of Twitter-friendly sidebar fodder) I took away from the August 29, 2016 edition of Raw.

5. Run a Red Blight
It’s not too late to re-think that Universal belt. Just work it into Kevin Owens’s storyline that he refuses to represent the WWE as its champion until they customize a strap specifically in his image. How could it possibly be more blinding than that blood-red miscarriage of creative design currently weighing down Owen’s mystique like an anchor? When he, Kevin Owens, Roman Reigns, Seth Rollins, and Big Cass (or is it just Cass? Mr. Cass?) gathered around their prospective prize in that opening segment, I kept waiting for someone to plead not have to wear it. The belt is bold, sure, and it suits the classic Raw color scheme. And I appreciate any effort to move away from traditional, macho monotones, not to mention the intention to make men’s titles more undistinguishable from the women’s. But the end result of this experiment looks more apt for the winner of a first-annual Gangrel invitational.

4. Neville Grounded
For now. They’ll figure his future out, and that might start with a bit of piss and vinegar after going down clean to Chris Jericho. Neville deserves better than the goody-two-shoes, “man that gravity forgot” shtick. High-flyers without an edge become circus acts sooner than later, and this guy’s too freakishly talented to find himself heading down WWE’s card and in danger of needing work under some lesser promoter’s big tent. With so many divisions and titles to go around, and given the way some gold has carelessly changed hands, it’s awfully difficult to make a case that Neville can’t believably brandish a championship around his waist. But the first, crucial step might be letting him portray a version of himself with subtler shades of gray.

3. Mild Samoan
I don’t mind the squashes, and can’t argue with her presence, but Nia Jax’s overall presentation needs some work. She’s been put in what’s possibly a no-win pickle with the tough-but-beautiful persona. The former plus-size model is, quite clearly, all of that outside the ring. But between the ropes – and from the curtain to the ring – her duality has been a bit muddied. That unfortunate, empowerment-lite entrance theme sets a tone that’s pretty hard to battle back from, and when it’s time to get unpretty (if I may invoke late-period TLC), Nia’s far from polished, as evidenced by the would-be-punishing finisher. She’ll get there, but one wonders if folks are right. Perhaps it’s time to take off the training wheels and let Nia shift to a different gear and real storyline. If not, then why the rush in calling her up? That question bedevils several NXT alumni, though given Jax’s unique spotlight, there’s no turning back, as curiosity has piqued about whether she’s truly one of a kind.

2. One Steph At a Time
Remember several months back, shortly after Shane McMahon’s return, when he and his sister would co-exist, but when he’d walk away her smile would tighten into its natural position: a scowl? Don’t be fooled by this righteously indignant younger-sister pose. Stephanie’s up to something, and my money’s on her advocacy of the advocate, Paul Heyman, and his client, Brock Lesnar. How much you wanna bet that when the smoke clears, it’s revealed that Mrs. Helmsley pre-approved that F5 on big bro as a measure of well-planned revenge on Shane for showing back up and insinuating himself in family business? Besides, since Stephanie’s very much been the voice of the women’s revolution, wouldn’t it only behoove her to personify the movement by blurring gender lines and blood ties and going mano-a-womano with her brother to find out who’s the ultimate corporate heir? It’d be like Cain and Abel, but much more Biblical. And, frankly, more believable. 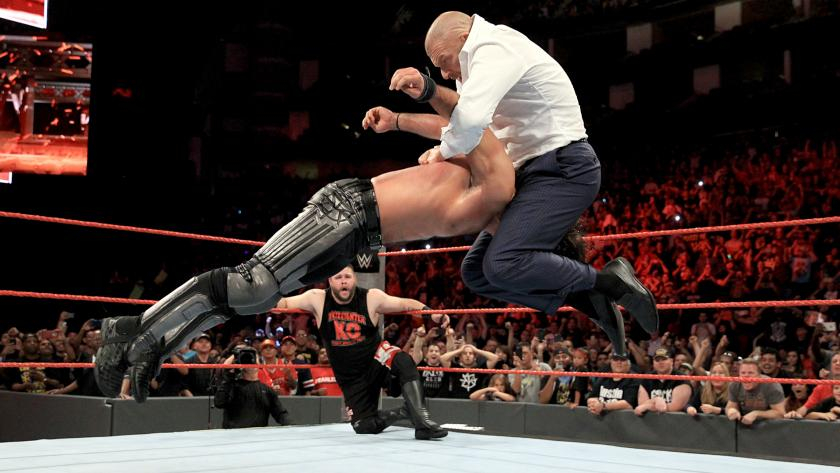 1. The Song Remains the Game
You could look at this a couple of ways. Cynics might say, “Geesh, that Triple H guy has to be front and center more or less biannually, doesn’t he?” Others might point to an observation from earlier in this column about the chaotic mix of recent NXT call-ups and familiar faces and say, “Well, looks like we got a war on our hands.” And if anyone knows about wrestling wars, it’s Triple H. This seems fairly plain: Both Roman Reigns and Seth Rollins blew their opps as his golden boys, both during and after the Shield. There’s all sorts of chatter about Rollins ruining (there’s that pesky accented “a” again) the Game’s latest anointed Full Sail graduate, Finn Bálor, by precipitating his shoulder injury at SummerSlam. And this is most certainly a time of narratives blurring fiction and IWC fodder, so why not have Triple H return and ostensibly plant the NXT flag on Raw soil, gift the Universal Championship to Kevin Owens and put any superstars who’ve had a few years or more in primetime on notice that their brands aren’t gonna keep his pet subsidiary from leaving its mark? Not to mention the potential intrigue of disconnect between everyone’s favorite segment-chewing power couple. But first things first, your champ is Kevin Owens, and at least the color of that belt matches the lettering on his shirt.