In January of 2007, the state of wrestling was in flux. The Monday Night Wars were a million miles in the rearview, leaving WWE the clear king of the mountain that was struggling to move forward in the post-Attitude Era. TNA had just started to pick up steam on Spike and Ring of Honor hadn’t hit television yet. With WCW and ECW now part of Vince McMahon’s company, there was no big name giving the WWE any trouble.

The network, also searching for new ideas amid a changing media landscape, promised to deliver exciting wrestling with gritty characters, and yes, plenty of explosions. In many ways, it looked to give the WWE the same kind of competition Ted Turner had with WCW a decade earlier, but instead ended up resembling something more like McMahon’s failed attempt at his own football league, the XFL.

“There seemed to be this big crossover of punk rock fans and bands that were wrestling fans,” Wrestling Society X producer Kevin Kleinrock tells Rolling Stone. “I always wondered if there was a way to combine those two worlds.”

MTV seemed like natural step. Kleinrock knew someone who was already going in to pitch a show to network executives (about, of all things, poker). He asked if he could also get a pitch in for his idea, which at the time was called Rancid Wrestling Federation because of the band’s love of wrestling. He went in and talked up the show, and, to his surprise, MTV actually called back right away to request a pilot. Getting MTV behind it was a huge step in the right direction for Wrestling Society X. Wrestling companies generally start up on a small budget, and almost never get the sort of distribution that MTV could produce. 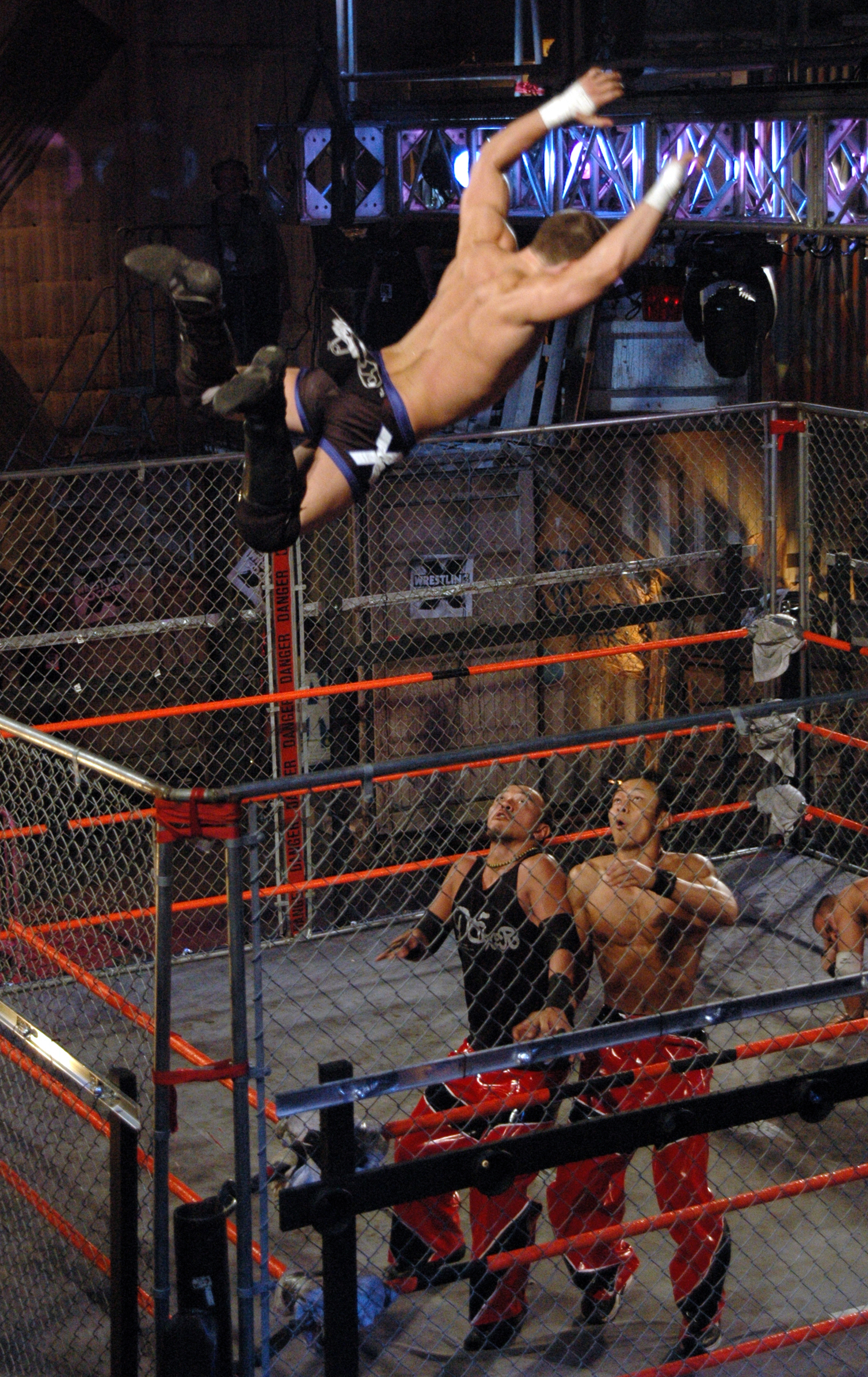 “This was the first wrestling-related show that was fully-funded by a television network…This isn’t us creating a wrestling organization and taking it to the network, like most others. This is us working with the network to create a wrestling series for the network…My original vision is not when it became. But when someone is putting a budget of 3.5 million dollars in front of you and saying here’s the money, now you have to make it look like what we want, you listen.”

Unfortunately, while its association with the network gave them a huge advantage, it also had its drawbacks. MTV and wrestling has a history going back to the start of the Rock N’ Wrestling era in the 1980s. WWE later would return to MTV when Sunday Night Heat found a home on the channel. Yet despite that, most of the higher-ups had no idea what it took to run a wrestling show. MTV’s influence would quickly be seen in the product. Kleinrock’s initial plan was to showcase some of the young, high-flying talent that he had collected. However, as he found out, sometimes a wayward thought could have massive ramifications on the product.

“I never had the thought of even doing one explosion,” Kleinrock says “But when we were just sitting around in one of the early development meetings with the executives, we were talking about crazy matches that have happened in wrestling. It wasn’t even meant for the show, just a list of things people had done in wrestling. But once I mentioned exploding cages and piranha death matches, they decided that’s what we needed. I learned very quickly that you should never even mention anything in front of a TV executive that you wouldn’t be ready to make happen for them.”

Kleinrock would go on to explain that MTV execs wanted to start the series off, right away, with a Piranha Death Match, a match where the purpose is to submerge your opponent in a tank full of piranhas. He was able to at least talk them into building towards it, but those sorts of matches certainly became what the show was known for. If you look on the back on the Wrestling Society X DVD, you’ll see in big letters “Includes the Piranha Death Match and Exploding Steel Cage Timebomb Deathmatch.” Whatever the plans were for Wrestling Society X, insane stunts and explosions would be what they were known for. In the very first episode the show opened with a match that featured Kleinrock’s vision with two future stars in Matt Sydal and Jack Evans. However, the premiere episode is more remembered for the WSX rumble, a hybrid of the Royal Rumble and a ladder match – with explosives on one side of the ring that two unlucky wrestlers would at some point in the match detonate by being thrown on top of them.

One person who was heavily involved in these stunts was M-Dogg 20, Matt Cross, who today also wrestles under the name Son of Havoc on Lucha Underground. He was part of a tag team with Teddy Hart on Wrestling Society X, called the Filth and the Fury. Cross wasn’t even supposed to be on the show initially. Pac (today you you may know him as Neville) was supposed to be flown in to Los Angeles to be Hart’s partner, until visa problems kept him out of the U.S. So Cross was called, and despite having college classes to attend the next day, he found his way out to L.A. instantly. He actually was told immediately about the idea for the exploding cage match, but shook it off as a joke over the phone. When he got there, he found out they were serious, but was actually intrigued by the idea. 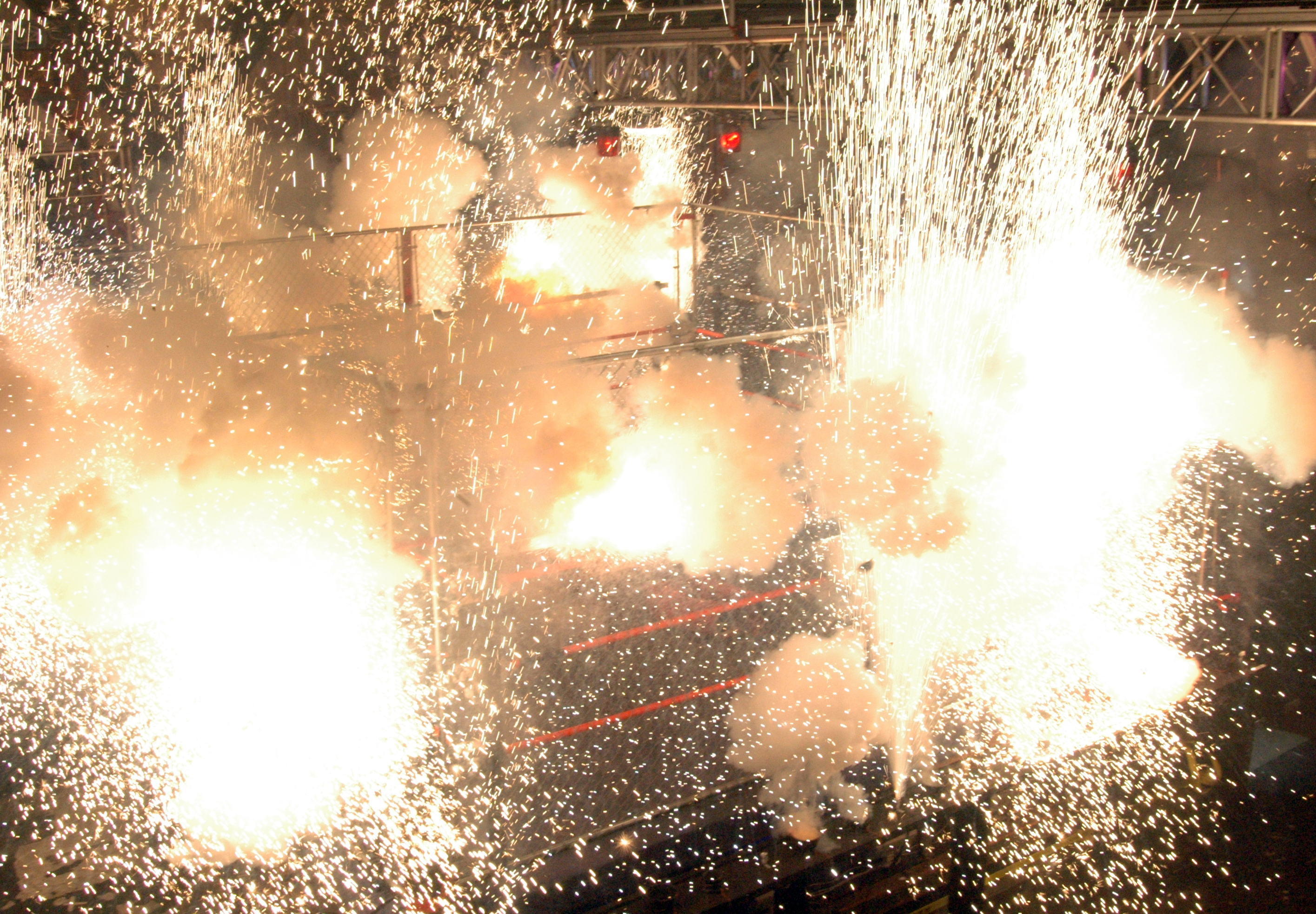 “Where they didn’t do themselves favors was that a lot of the explosions were genuinely dangerous,” Cross explains. “What’s kind of upsetting is that a lot of that is lost on the fact that it almost came off as cheesy or campy because they did stuff like shaking the cameras… I ran and jumped into an explosion. That’s what you saw. If they had shown exactly that, it might have gotten more of the respect it deserved.”

This would become the strange dichotomy of Wrestling Society X. On the one hand, they had wrestlers who would go on to have WWE success like Tyler Black (Seth Rollins) and Matt Sydal (Evan Borne), plus others like Jimmy Jacobs, Joey Ryan, Cross, Colt Cabana, and the first televised American exposure to Dragon Gate, a Japanese promotion that would go on to have a major presence in the independent wrestling scene, and attracted talent like Kevin Owens, Sami Zayn, Daniel Bryan, Finn Balor, Rich Swann, and more. The first ever match featured Sydal facing Jack Evans. It showed exactly what Kleinrock wanted to feature in some fast-paced, high-flying action between two athletic up-and-comers in the wrestling world.

“We were all feeding off each other’s energy,” Sydal recalls about the tapings. “It was a chance for guys from all over the world to come together and be a part of something. Everyone clicked.”

On the other hand, the matches had to be edited to about three minutes due to the 30-minute runtime, and the featured matches included wacky stunts and things exploding, even if it didn’t quite makes sense (who knew a casket would blow up if you tombstoned someone into it?). And the matches themselves looked unlike any that you could see on television at that time.

“After Jackass, MTV had an issue where kids would try to replicate what they saw on the show and get hurt, and there was backlash on the network,” Kleinrock explains when asked about the unique presentation. “They were very gun-shy about doing things that kids could easily replicate at home. And so it lead to this weird post-production experience, after we shot all the matches like a normal wrestling match… but they wanted us to edit out kicks and punches.”

Despite the oddities of the show, the wrestlers involved felt that the tapings went well. They may have had some slight concerns about it, but, as Cross explained, he thought that at the very least, there was enough to build on and with how much MTV put into it, it may reach season two.

“This is going to make me sound silly, but I didn’t have any doubts,” Cross says with a laugh. “We filmed the entire season, I watched it all happen. I thought it was awesome coming out of it. We knew it would be edited, but then it would be on MTV! And because it was on MTV, it could give wrestling this insane platform, and we could become stars.”

As we now know, he was wrong. The show opened to reasonable success, drawing a 1.0 rating at 10:30 at night, going directly against WWE’s ECW on SyFy. However, by the third week that number had fallen in half, drawing only a .5 rating. They had to skip a week due to an episode MTV felt too violent, and then less than five weeks after Wrestling Society X made its debut, the announcement was made to pull the plug, show the remaining tapings on a one-night marathon, and then part ways. 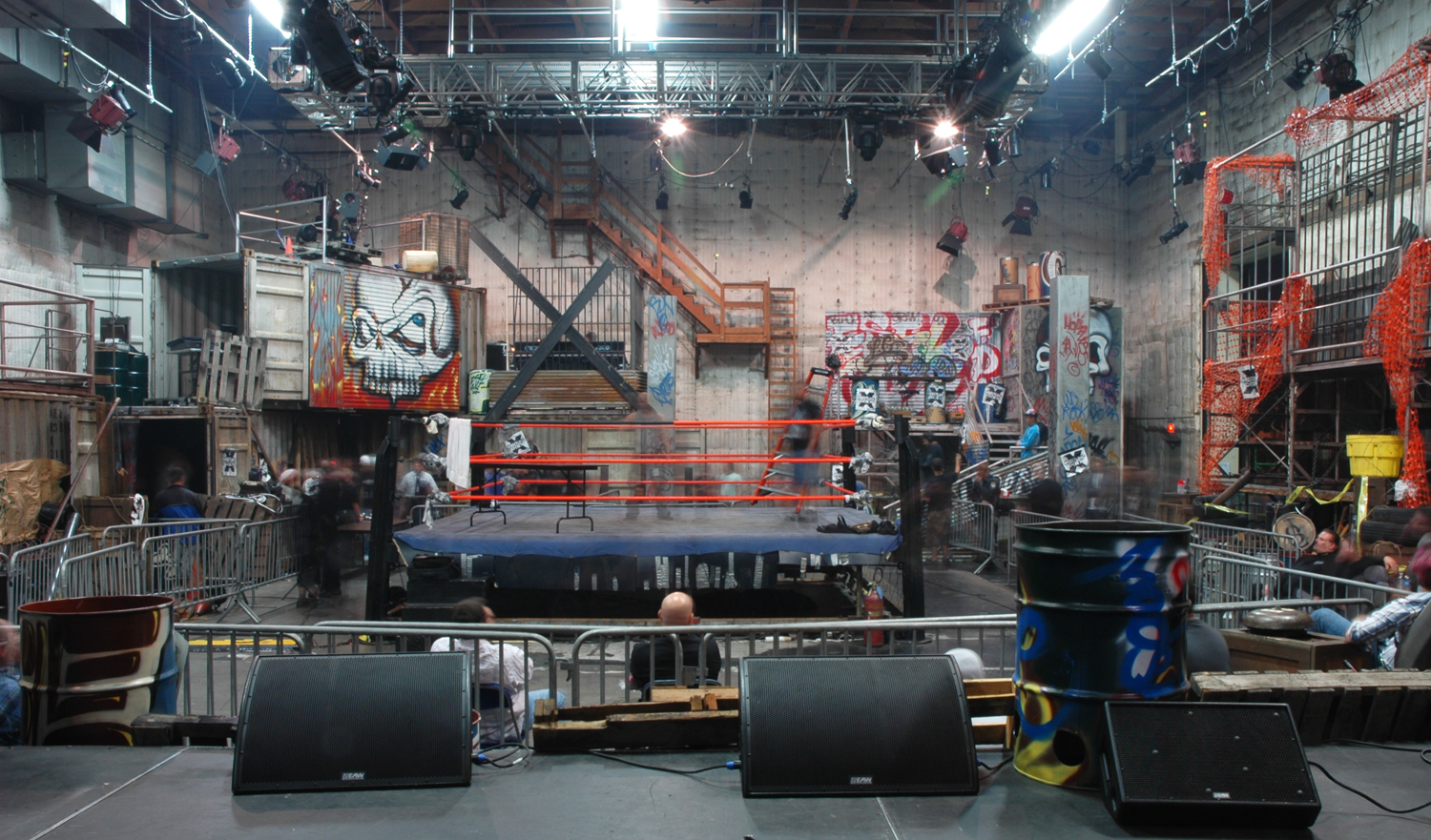 “I think that even though MTV flirted with the idea of wanting wrestling, I think that before the show’s first episode even aired, nobody above the level of the people we were working with really were willing to back it,” Kleinrock recalls. “[Being canceled] wasn’t unexpected, but it definitely took wind out of my sails to have it come crashing down so fast. I still feel that the show, done the right way, could have had some longevity.”

Despite the lack of success for Wrestling Society X, you can see some of its influences still today. Of course its roster has continued to thrive, with wrestlers currently in WWE, ROH, and more. You could also say that Lucha Underground is something of a descendent of Wrestling Society X, more of a television drama that happened to contain wrestling, instead of a wrestling show on TV. Throw in the grungy, underground, motif of Lucha Underground, and you could certainly see it if they drew some of their inspiration to the MTV show.

“Wrestling Society X had that bunker feel, it didn’t have that arena look, and of course Lucha Underground has that same sort of dark and dingy thing going on,” Cross says. “When I think back to it, it’s so crazy that so many people were involved in both projects [Wrestling Society X and Lucha Underground]. Me, Jack Evans, Vampiro, Ricky Banderas. For them to be a decade apart and for so many of us to still be in wrestling, it’s kind of crazy…”

As for Wrestling Society X itself, it clearly occupies an odd space in wrestling history. Much like the maligned XFL, it came in with a bang, had a big network behind it, featured some outrageous aspects, and fizzled quickly. And for a while it was a joke. However, years later, you could almost say there’s still a cult-like aspect around it. You can see where other companies have taken aspects of the failures and built upon it. And their fans still exist. As the anniversary approached, the @WresSocietyX twitter account started, and quickly gained over 1000 followers. Talk of a reunion of some sort cropping up from fans. Kleinrock said he wasn’t sure if that would happen, but if it he did, he said that he would probably do it in conjunction with companies that have followed the music/wrestling fusion that he envisioned, like FEST Wrestling in Gainesville, which started as part of The Fest punk festival. For Matt Cross, he just hopes that Wrestling Society X is remembered fondly by fans.

“It’s always good to have different alternatives and new things and new ideas, and that’s what Wrestling Society X tried to do. It tried to take a chance and do something different. I personally think it was pretty awesome. I think stuff like that should be rewarded.”