Everywhere you look, everywhere you listen, every newscast you’ve watched has told you the same thing: That 2017 is nothing but a shit sandwich so far.

One month after an unpopular president took office, North Korea celebrated Donald Trump’s admission into the World Leaders Club not with fireworks but with missiles fired into the Sea of Japan. War raged in the Middle East; cholera broke out there too. Bombings in Manchester and London rocked Europe along with automobile and knife attacks in Germany and France. Ethnic cleansing, an evil 1990s throwback, cropped up again in Burma. Mass displacement continued in Syria, Iraq, South Sudan, and the Congo. And as cyberattacks crippled computer systems worldwide, social media raged on as the U.S. President insulted world leaders, allies, and adversaries, daily on Twitter.

Dodgers' Cody Bellinger on His Perfect Swing, Thirst for Frappucinos

Near the American home front hurricanes hit Houston, Puerto Rico and Florida. Then October started with a mass shooting in Las Vegas that ended with the deaths of 58 innocent people and 500 more injured. Meanwhile, wildfires started burning up California.

Sports was one minor method of escape. And luckily for Major League Baseball fans, the national pastime dished up the action and suspense of a Gal Gadot flick, but with storybook endings, and humor of the 1989 film Major League.

Home runs came back in style, as 2017 surpassed all other years in home run production. Just to chip in and make it all the more exciting, two rookies named Aaron Judge and Cody Bellinger broke records. Bellinger erased the longstanding National League mark, first set at 38 in 1930, while Judge crushed Mark McGwire’s all-time MLB rookie year record and also led the American League in 2017 with 52.

Infields looked sharp and tight as the Houston Astros and Los Angeles Dodgers dazzled at every base and turned double-plays into highlight magic. Outfielders like Judge and little-known Chicago Cubs platoon player Leonys Martin, picked off fly balls at the wall, robbing rivals of wins and home runs.

But baseball also became fun again. Players let down their hair and hit the field wearing nicknames for Players Weekend. Others like Colorado Rockies’ Gerrardo Parra rocked out colorful hair. Outside the diamond, the Cubs bullpen showed off dance moves after every home run, and other teams challenged them during rain delays. Even umpires had fun and didn’t hold back from giving players their share of sass.

Last year’s World Series was all about ending jinxes and Midwestern pride. The Chicago Cubs closed out a 108-year drought – not to mention both the Curse of the Billy Goat and the apparent hex of “The Bartman Game” – while the Cleveland Indians won their division for the first time in a decade and took the Cubs to the limit in an epic seven-game World Series that ended in extra innings. But after dominating 2016 all season, pretty much everyone expected the Cubs (finally) to get the job done. In contrast, 2017 was anything but a sure thing.

For starters, the highly touted Dodgers, picked by baseball experts to run away with the season, spent the first two months in deadlock. Continuously battle with two good division rivals, the Rockies and the Arizona Diamondbacks, meant the Dodgers sat most in third place, unable to break out until almost June.

But as the weeks rolled by, the Dodgers just kept winning. They won games different ways – some by excellent pitching, others by massive hitting. The Dodgers won close ones, sometimes by just a run. Other times by blowouts, like a crucial 7-0 win versus the Nationals in September and also three-game sweeps of the Cubs, D-Backs, Pirates, and Reds (twice), plus a four-game sweep of the Mets before the All-Star Break.

And even when they were “bad” the Dodgers were still damn good. After an eleven-game losing streak and losing 16 of 17 games between August 26 and September 11, the Dodgers still owned the best record in baseball, at 92-52 — a huge 40 games over .500.

Rockies outfielder Charlie Blackmon, who was 2017’s National League batting champion, saw plenty of action against the Dodgers in the Rockies’ tussle for a Wildcard Playoff spot. He identifies the Dodgers as somewhat of a two-headed monster of excellent bats and un-hittable pitching, a freak of nature grown out of the tempest that is the National League West.

“I think our division was the most competitive, and it starts with Dodgers at the top with statistically the best starting pitching,” Blackmon told Rolling Stone, on Friday. “Also the Arizona Diamondbacks were very tough, and having us, the Rockies too — with all three teams good enough for playoff spots— it makes it so competitive [that] everyone steps up their game.”

From an organizational standpoint though, Blackmon says the Dodgers made smart moves and deliberate efforts to build something special from top to bottom.

“I think the Dodgers in recent years sensed they had a need or a desire for good left-handed pitching.” Currently, the three fourths of the Dodgers starting rotation is left-handed. “Kershaw is perhaps the best-known pitcher for good reason. And Rich Hill and Alex Wood have only helped make the Dodgers dominant all season.”

But its not just starters that makes the Dodgers so electric, so fun to watch, and so difficult to beat. Blackmon says that the Dodgers have also “best bullpen in all of baseball” with relievers Kenta Maeda, Brandon Morrow, and Ross Stripling adding dimension, and all pitching with 0.00 postseason ERAs. Then, there’s the L.A.’s mighty closer Kenley Jansen.

“If you’re facing Jansen, that’s usually not a good sign and obviously it’s late in the game. You want to try to avoid seeing him altogether.” Blackmon mentions that the 6 foot 5, 275-pound Jansen does a couple things almost better than anyone on the mound.

“First it feels like he’s 8 feet tall with those long arms, and so its hard to find his release point. It makes it look like he’s throwing at you from little league distances. But Jansen also varies his pitch delivery, so this throws hitters off.”

Plus, Blackmon says Jansen’s two favorite pitches are what reeks the most havoc on rivals’ 9th innings.

“His best pitch is still his cutter, and [Yankees legend] Mariano Rivera threw almost exclusively cutters, so it seems Jansen’s taking a page out of his book. But you’re also seeing him throw more curveballs than ever before too. Tough stuff.”

Pitching aside, the Dodgers have equally as been as good, maybe better, at the plate. As a nice surprise, their somewhat dormant-hitting right fielder Yasiel Puig came alive big time in October with 12 critical postseason hits and a ridiculous .414 batting average and .514 on-base percentage. More reliable has been third baseman Justin Turner with game-winning hits and runs batted in (RBIs). Add Turner, Chris Taylor, and Corey Seager to the contributions of Bellinger, who led the Dodgers in home runs, bases, RBIs, and all Dodgers position players in slugging.

“Cody’s one of the many reasons the Dodgers are in the Series this year,” Blackmon said about Bellinger. “He’s got unbelievable tools, that swing, and the ability to hit almost 40 homers when you’ve never played a full [Major League] season is pretty amazing.”

So, yeah, the Dodgers are great. Perhaps legendary. But their competition 113th Fall Classic, the Houston Astros, are no bunch of slouches either.

From the outset the Astros set 2017 on fire jumping out in front of the American League West with a 17-9 record by May 1. The same month it became commonplace to see double-digit run totals from Houston, with wins like the 16-8 and 17-6 wins during the three-game wrap of the Minnesota Twins May 29-31. Or a 19-1 stomping of the Toronto Blue Jays, July 9th. All season it seemed little could stop them.

George Springer, Jose Altuve, and Carlos Correa all hit for extra bases galore while swatting 250 RBIs between them. Dallas Keuchel got back to form, despite the taunts of media naysayers who thought his 2015 Cy Young Award was a fluke. Reliever Chris Devenski became a favorite of the math nerds at FiveThirtyEight. And, as a surprise gift to the Astros’ doting fans, the front office made a last-minute deal to grab Justin Verlander from the Detroit Tigers.

But getting to the World Series was no easy feat for Houston either. The Astros had to fend off a worthy challenge first from the Boston Red Sox in the American League Divisional Series, before fighting off New York Yankees, who took back an Astros’ two-game ALCS lead, forcing them to seven games. Perhaps one of the biggest motivating factors for the Houston Astros has been its drive to do good for City of Houston after Hurricane Harvey.

As Astros manager A.J. Hinch told Rolling Stone last month, “Athletes rarely need extra reasons to try to be great. But I think we’ve owned the responsibility of representing Houston the right way.” Hinch also says that his players understand what bringing a home championship would mean, especially given the fact that players and the club’s staff have been very involved with local community efforts since the big storm. 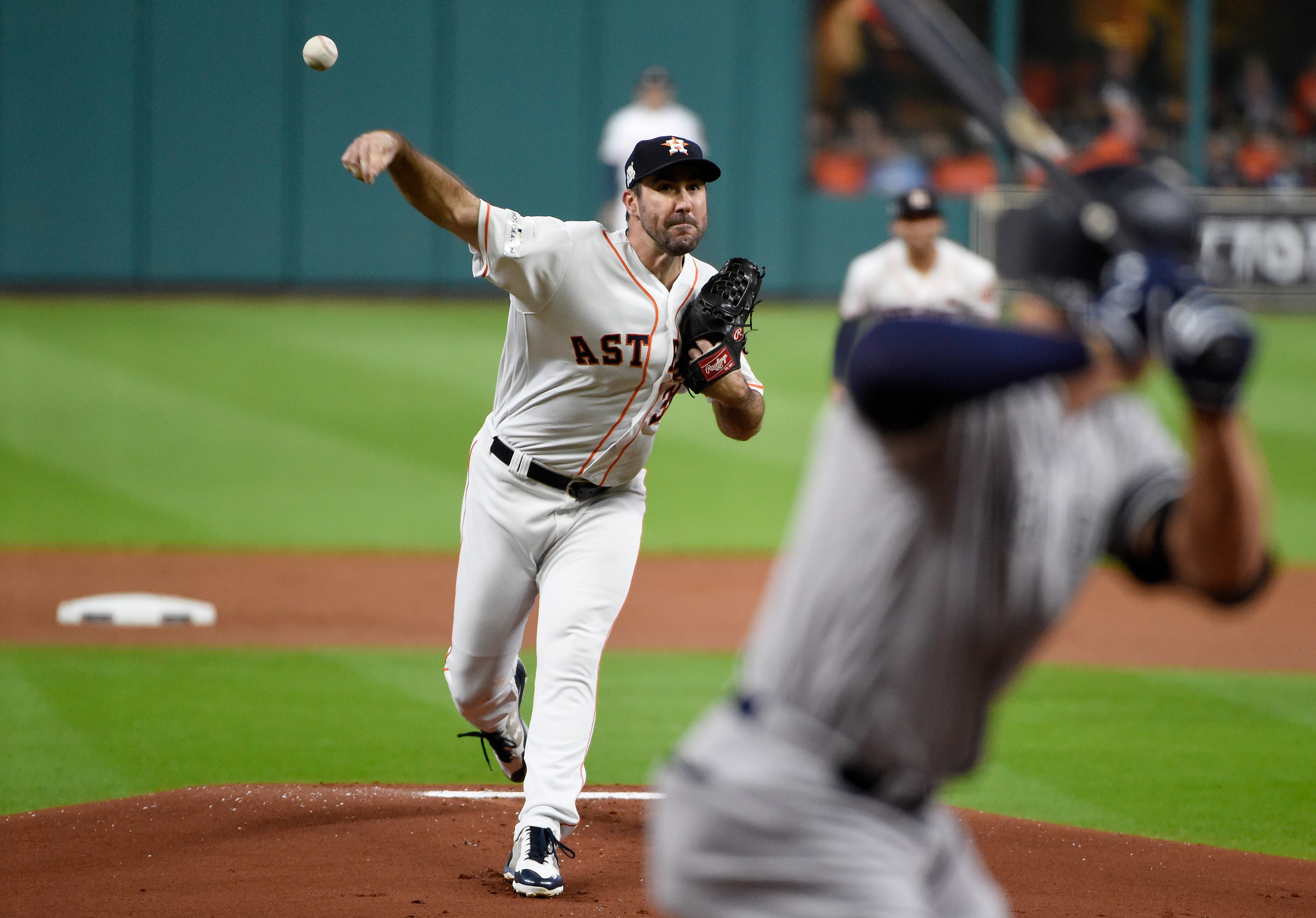 Same Series, New World
As the Dodgers aim for their first World Series win in 29 years, and Houston takes its second crack at winning their first Series ever, viewers can watch Game 1 and the entire World Series, starting Tuesday, October 24, on FOX. More good news for baseball is that the 2017 All-Star Game saw a 7% jump in viewership, according to USA Today and Forbes magazine points out that even extras like the World Baseball Classic, which is essentially the World Cup of baseball, has reeled in larger TV audiences.

But as the world changes and sports viewing habits with it, baseball has tried to forge a more meaningful relationship with fans, engaging them on a deeper level. For the 2017 World Series fans of all stripes can also dig in deeper with the MLB Players Association (MLBPA) mobile social app called Infield Chatter. Blackmon said Infield Chatter “is basically a place where players can hang out with fans.” It also lets baseball fans can comment during the World Series live games, and even message players. Blackmon tells a story about getting good vibes this season.

“I got a message from a girl who said she was in the process reconnecting with her dad. They came to Rockies home game, and said “thanks and great job on the field, before mentioning what great moment it was for them both.”

In addition to rooting for teams digitally, messaging players, and following the game live, the MLBPA says that the first million fans to download before 3 P.M. Tuesday have a chance to walk of with $1 million cash.

Blackmon added that the World Series always stokes the biggest baseball fans. But he also hopes that interest in the big game continues to build baseball’s community.

“This year the players decided as a group collectively, we wanted to make a difference, not just domestically, but in communities all over the world that bring us players and fans.” Blackmon points not only to the work that the Astros have done in their community, but also mentions the many players who have donated time and resources to help Puerto Rico after Hurricane Maria.

“It’s good for the baseball players to feel more connected with other people who love the game as much as we do. That’s a big deal, even during the Series, and especially during such a tough year.”