Because of the primacy that basketball places on the individual star, the NBA is the major American sport most governed by broad organizational philosophies. The identity of a team is tied strongly to its best player and almost as strongly to its top three players, meaning that teams are built around players and their strengths and weaknesses to a much greater degree than in baseball or football.

The San Antonio Spurs have historically sought out high character, quiet leaders (Tim Duncan, Kawhi Leonard) and surrounded them with talented but often limited or unorthodox players who have been coaxed out of their shells (Danny Green, Boris Diaw, Marco Belinelli, Cory Joseph). The Los Angeles Lakers have gone after and usually gotten the biggest and brightest names available (Shaquille O’Neal, Dwight Howard) and then relied on the gravitational pull of Hollywood and (for many years) Kobe Bryant’s otherworldly skill to draw in role players. The Sacramento Kings are … well, the Kings over the last decade or so have basically been trying to see how many people they can fit inside a clown car.

Whatever the approach, though, the teams who have created sustainable success have generally done so by making one or two major good decisions and then compounding the interest on them. The Golden State Warriors traded Monta Ellis for Andrew Bogut and got Steph Curry to re-sign at what turned out to be a massive discount, then started building from there. Although it hasn’t always gone smoothly – cough, David Blatt, cough – LeBron’s second run with the Cleveland Cavaliers has been successful because of decisions that cater to LeBron as a player. And while the end result of #TheProcess is still up in the air, Joel Embiid’s success so far in the league shows that it’s possible the Philadelphia 76ers’ decision to tank and tank hard is bearing fruit. The best teams take an advantage when it’s presented, then build a plan to leverage it.

And then there are the New York Knicks.

Over the last decade-plus, the Knicks’ plan appears to have been a Trumpian “be so good, be so smart” without any clear indication that they know how to be either of those things. The Knicks’ “don’t rebuild, reload” ethos has led them to run counter to the fundamental grain of the NBA, which usually means building through the draft. Over the past three decades, the Knicks have traded nearly half their first round picks before the draft. Since 1994 – when they drafted Charlie Ward – they’ve signed exactly one first round draft pick to a second contract. That was David Lee, who was traded one year into his second contract. Kristaps Porzingis was a shining light last year, but to establish context, he played the most rookie minutes for the Knicks since Mark Jackson, who was drafted by New York in 1987. More on him later. 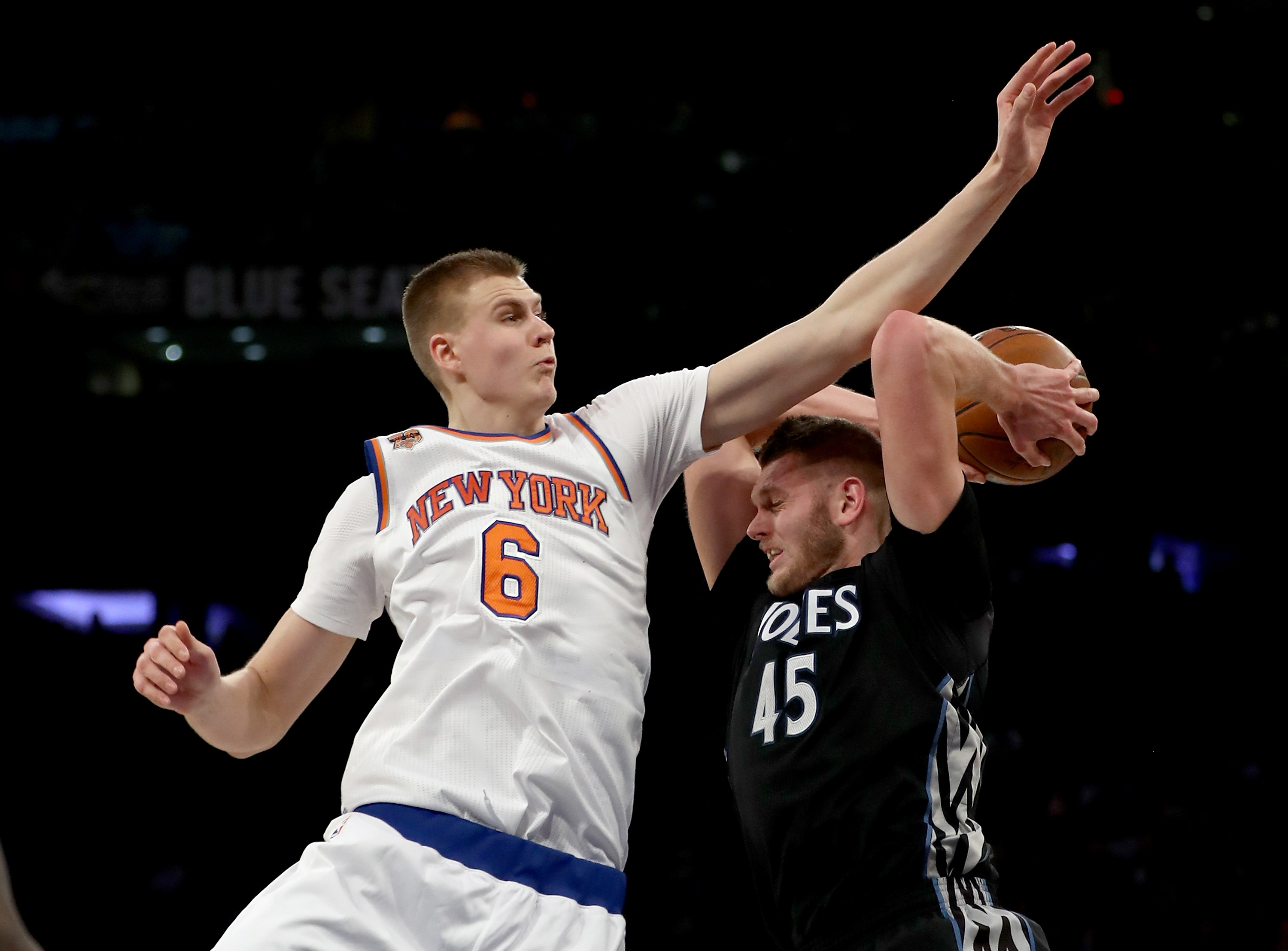 To paraphrase The Wire‘s Sergeant Landsman, the Knicks don’t cast off young talent lightly. They heave it away with great force.

Instead of cultivating players themselves, they have consistently sought home run trades and signings. They got Carmelo Anthony from the Nuggets in 2011, but they also managed to send away a passel of young players who actually improved the Nuggets. (Denver’s overall record since the trade has been better than New York’s, and in the tougher Western Conference.) Anthony got sandwiched into a frontcourt with Amar’e Stoudemire and Tyson Chandler, with none of them able to effectively stretch the floor and all of them crowding each other’s space. There was also the problem of Stoudemire’s nagging injuries, but in spite of the roster construction issues, the team made the playoffs in Anthony’s first three years with the team, including a 54-win season in 2012-13.

This would traditionally be the point where a team would start trying to compound the interest on their generally good decision to get Anthony and begin to build on that success with smart moves. Instead, the Knicks went out and got Andrea Bargnani.

Bargnani was supposed to be that big man who could stretch the floor, but as a member of the Toronto Raptors his main abilities had been allowing opposing players unchecked access to the rim, not making shots (41.5% from the field, 30.1% from the three-point line) and being injured. None of that changed for Bargnani in New York, and the only major thing the Knicks had to give up for him was – you guessed it – a first-round pick.

This predilection for former or supposed greatness over future or even current greatness continued this past offseason, when the Knicks parted ways with perfectly serviceable 28-year-old center Robin Lopez to gamble on the equally 28-year-old but more or less kneeless (although also former MVP and All-Star) Derrick Rose, then replaced Lopez by offering the 31-year-old and broken down (but also former Defensive Player of the Year and All-Star) Joakim Noah a four-year, $72 million contract.

Noah is currently averaging 4.4 points and 7.9 rebounds per game while shooting 46.9% from the field and 30.6% from the line. These are all either career lows or close to them, save for his last injury-riddled season in Chicago, the season that led the Knicks to offer him that generous contract. Rose has been fine, relatively speaking, but with his contract ending this season, Knicks fans surely have to worry about what the team might offer him, based on history.

Through all this, though, Porzingis remains a 7-foot-3 unicorn. Anthony remains an elite player on the offensive side of the ball. And the Knicks remain in the Eastern Conference, where they are in sixth place, but just a game-and-a-half away from 12th. No Knicks fan I know is particularly enthused about the rest of season.

But imagine for a moment an alternate universe. One in which the Knicks got the best seasons of Stoudemire, Rose and Noah. One in which they got the all-passing, defensively decent glue guy that Anthony is when he plays internationally – the guy he’s never gotten to be in New York because he’s always had to be the alpha scorer. One in which Bargnani got his shit together; in which they didn’t completely botch re-signing Jeremy Lin; in which Phil Jackson’s magical touch as a coach translated more directly to success as an executive; in which James Dolan found himself transported to the middle of a desert in Tunisia after turning the ice wheel on the island from Lost. 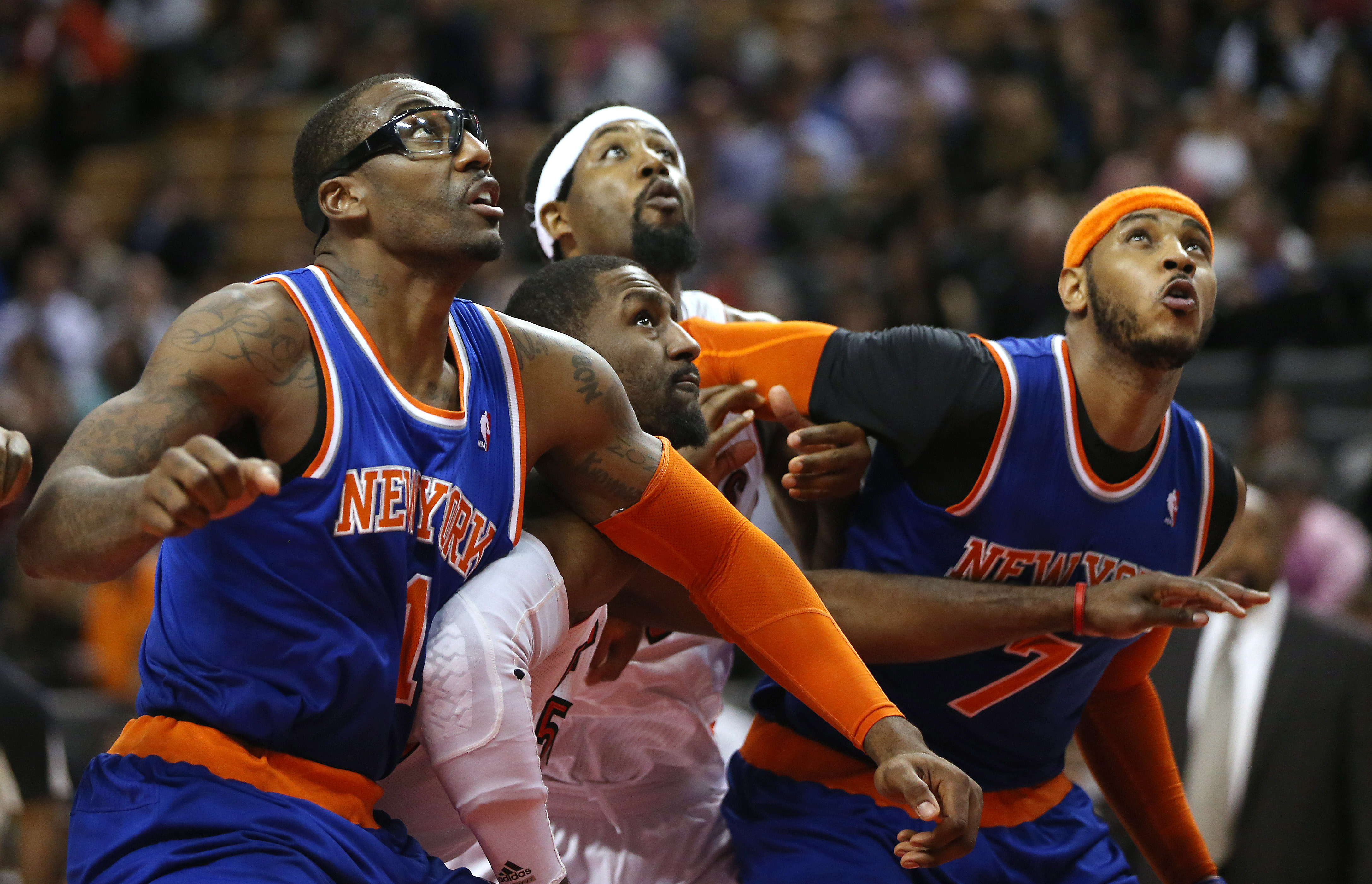 The Knicks don’t gamble on diamonds in the rough. They’re not going to unearth a Kawhi Leonard or discover a Steve Nash or cultivate a Giannis Antetokounmpo. They operate like the Los Angeles Lakers in the Upside Down, a place where the bright lights of Broadway lure the best players like Hollywood does, then brings the best out of them. They pay lavishly for them because it seems so very New York to put out the big money for the big players. In this imaginary world, the Knicks get the best players and make them better.

But in the real world, this hasn’t worked out for them. This is why the Knicks seem less representative of the grit, heart and industry of the New York City you see at street level, and more like Michael Scott’s New York: a postcard crammed with ideas about what New York means and none of what actually makes the city great. Jeremy Lin wouldn’t necessarily have been a difference maker for them, but the way his meteoric rise was cherished by New York fans then quickly squandered by the team itself embodies the organization’s cartoonish approach.

This is why we have to protect Kristaps Porzingis. In the day of this franchise’s last couple decades, Porzingis is the first time the broken clock has been absolutely right. Prior to this season, there was a lot of talk – much of it at least somewhat sardonic – about the Knicks assembling a superteam. And if 2016 were 2011, they would have. Carmelo! Rose! Noah! How great does that look? But to one extent or another, all their best days as players are now behind them and the future of the team has to rest with Porzingis. The Knicks made the best decision they’d made in years by drafting him. The problem now is that they’re still going to be the Knicks when they have to make the next good decisions to maximize his potential. Fans can really only hope the broken clock can be right again.