Even after the Rio Olympics are a distant memory, the gold medal wins by gymnast Simone Biles that solidified her place as the best in the world, as well as the one captured by swimmer Simone Manuel that made her the first black woman to win an individual medal in swimming (to go along with the other gold she won in the 400 relay), will still resonate, and the performances will still be talked about for years to come. But look through almost any comment thread and you’ll find people trying to take race out of the equation, emphasizing that these wins are for Americans. Seeing this dynamic lays bare a truth all black people realize: that there are two Americas: one for white people and another for everyone else.

To paraphrase writer Luvvie Ajayi, when black people do exceptional things (and our excellence proves undeniable) white people love to emphasize the “American” in African-American. The medals Biles and Manuel have won don’t broadly represent American idealism and perseverance. They are a stark reminder of the tradition of black athletic excellence they’re continuing. To sideline the fact that they are young black women is to ignore the entrenched, racist history of their sports that there presence dismantles. It’s also easy to forget that ignoring race is a luxury not afforded to black women like Biles and Manuel. If anything, their accomplishments are a win for every black girl told she wasn’t good enough, that she didn’t have the “right look” for gymnastics, or was reminded as she stepped foot into her first swimming class that there was no one else that looked like her inside.

Why the Women's Gymnastics Team's Greatness Is Revolutionary

Biles notably isn’t interested in letting the racial options of her career dominate the narrative. At one point she said, “I just do my gymnastics because I like to have fun. I don’t bring race into it.” But she doesn’t have to openly comment on race to provide a powerful statement. Her mere presence as a top athlete in a sport with a deeply coded racial history where she is the first African-American to receive such wins says enough. Biles was the front runner going into the Olympics for the gold medals she’s eventually win in team all-around and individual all-around. But she still had to go out there and pull it off. Which she did with the mix of strength, power, and technical skill that has led her to be considered by many as the best gymnast of all time. Watching her in action is the living embodiment of black girl magic. After her win this summer Biles said something that feels like a striking repudiation of how women’s achievements can be short changed in favor of men – which is reflected throughout the coverage of the Olympics this year. “It’s amazing to be recognized for all this success [but] I’m not the next Usain Bolt or Michael Phelps. I’m the first Simone Biles,” she said. Of course, as a black woman the weight of these issues are different for her.

The black female body has been a flashpoint in American history. When you hear Gabby Douglas’ hair choices being scrutinized, what Beyoncé wears being criticized or Serena Williams’ body being deemed “masculine” these things don’t exist in a vacuum. They reflect a long tradition in American culture to denigrate and dismantle the humanity (and accomplishments) of black women. Biles doesn’t need to discuss race directly for it to be brought into the discussion.

Simone Manuel – the 20-year old athlete who tied for gold in the 100-meter freestyle with Canada’s Penny Oleksiak – takes a very different approach than Biles. She openly discusses what it means for her to be the first African-American woman to not only win an individual medal at all, but a gold medal at that. The last time a black woman earned an Olympic medal in swimming was Enith Brianna from the Netherlands in 1976. “It means a lot, especially with what is going on in the world today, some of the issues of police brutality. This win hopefully brings some hope and change to some of the issues that are going on. My color just comes with the territory,” Manuel said. 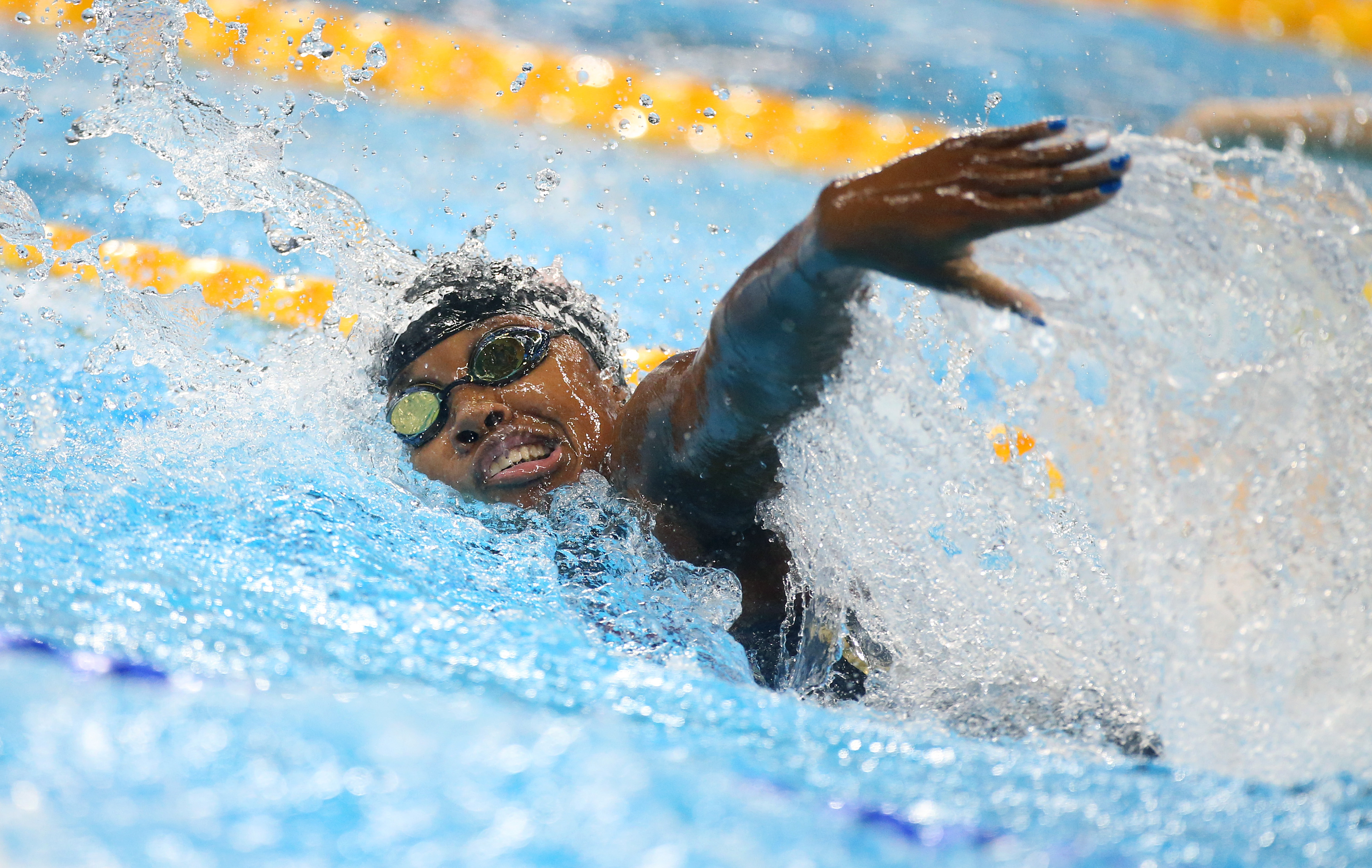 The issues that exist at the nexus of swimming pools and American racism go back decades. As Vox reports, the fraught dynamics of segregation were fought within swimming pools as well. Often whites would shut down or avoid pools rather than have to intermingle with black people. There were legal battles fought throughout the 1950s over the access black people had to swimming pools and beaches that continued even after Brown v. the Board of Education and the idea that “separate but equal” facilities were deemed unconstitutional. The most striking incident came in the summer of 1964. Black and white protestors staged a sit-in at a whites only pool in Augustine, Florida. The owner, trying to force the protestors out, poured acid in the pool. The photographs taken at that sit-in demonstrate a sharp divide between the white owner’s cruelty and indifference toward the well-being of fellow human beings and a young black female protestor whose face is marked by panic. This is the history Manuel’s win sits next to. Sure, she might never have to deal with such flagrant abuse. But there are echoes of this event in the casual racism of her being unnamed in the original Mercury News tweet about her win and in how at the Olympic press conference for her there was allegedly only one black journalist there.

That last point may seem minor to some but how we view historical events like Manuel and Biles’ wins are shaped by those who write it.

The overwhelming narrative coming out of the Olympics this year is the black women representing the United States who have been dominating their sports. But the counterpoint to the praise and success of Biles, Manuel, and Michelle Carter, who became the first American woman to win gold in shot put, is the particular blend of sexism and racism other black female athletes at the Olympics have had to face.

Fencer Ibtihaj Muhammad, the first Muslim to represent the U.S. in a hijab at this year’s Olympics, recognizes the weight of representation saying, “The honor of representing Muslim and black women is one I don’t take lightly.” The weight of this representation translates into higher scrutiny and often a confluence of racist and sexist attitudes which was evident wading through comment sections and Twitter. Gabby Douglas has dealt with undue pressure and criticism on everything from whether she deserved to attend the Olympics in the first place despite being one of the best gymnasts in the world to not seeming grateful enough or patriotic for not placing her hand over heart on the medal podium. What Douglas has dealt with makes the road for teammate Biles easier. Furthermore, the intense, misguided criticism of Douglas underscores how often it seems like only one black person in a given field can be praised and upheld. There’s more than enough room for both women at the top.

After a press conference, ESPN noted that Douglas walked down the hall, faced a wall, and cried deeply. This demonstrates the cost of being in the public eye as a black woman and being at the forefront of a changing sport – often people refuse to acknowledge your humanity.

It may seem a bit limiting to view the downright legendary feats of these women through the lens of America’s racial history. But in not doing so would be emotionally and intellectual dishonest. “Coming into the race I tried to take the weight of the black community off my shoulders. It’s something I carry with me. I want to be an inspiration, but I would like there to be a day when it’s not ‘Simone the black swimmer,'” Manuel said. For that to happen depends on the black women that come after Biles and Manuel. The way history is written it’s often only the women who come first that are remembered. It’s the black girls inspired by watching the prowess of Biles and Manuel following their footsteps that are incredibly important. They will normalize the image of black women in these sports. It’s these girls coming afterwards who will continue to chip away at the racist underpinnings of these sports. They will make the burden of racism and expectations that Manuel speaks off weigh a bit less.