Many wrestlers have come and gone in WWE throughout the years. Some of them fade away when they leave, others burn bright, becoming even bigger stars on the indie circuit. Trent Baretta falls into the latter category. He broke in to Vince McMahon’s company as one half of the Dudebusters, a short-lived tag team that got lost in the shuffle. Eventually, he ended up in NXT, which definitely wasn’t the powerhouse promotion it’s become today.

After being released in 2013, he quickly made noise on the indie scene, competing in Pro Wrestling Guerrilla, Dragon Gate USA and even New Japan Pro-Wrestling. He’s now joined Rocky Romero as part of the Roppongi Vice, and they’ve quickly became a major part of the tag scene, both in the U.S. and Japan. They won the IWGP Junior Heavyweight Tag Team titles less than two months after they debuted, beating the Young Bucks in the process. While they’ve since dropped the titles back to the Bucks, they continue to face them, as well as the rest of the Bullet Club, on a regular basis, in addition to teams like the Briscoe Brothers, ReDRagon and the Addiction in what’s become an incredibly strong tag division between New Japan and Ring of Honor.

The Young Bucks on Kevin Owens, Keeping It Indie and Vince McMahon's Money

Recently, Rolling Stone managed to catch up with the very busy Baretta to talk about his time in WWE, the rise of tag team wrestling and his opportunities in New Japan and elsewhere.

How exactly did Roppongi Vice come about? Rocky was teaming with Alex Koslov for a long time, so how did you become the person to replace him?
He’s my real-life friend. We did Super Juniors together, and the Juniors tag tournament. I think New Japan had an eye on me for a bit. When Koslov decided to go, they were the ones who picked me. Rocky and I had never worked together before. We had one singles match against each other, and maybe a ten man or something where we were on the same team. I knew we were going to pull things together though. We literally got to the Ring of Honor show where we were going to team for the first time not knowing exactly what we were going to do. We sat there in the ring and kind of just figured out some moves, and made it up as we went. We’ve just been making it up as we go the entire time.

As a result, you’re now facing the Briscoes one night, the Young Bucks the next. Most wrestlers dream of doing that in a year, let alone a single weekend –
I know! It’s been absolutely nuts. I was sitting at home with a knee injury not long ago. Next thing I know, I’m told, “You’re going to team with Rocky and you’re going to New Japan. Not just that, but New Japan wants you to go work with Ring of Honor.” I was shocked. It’s amazing that this happened. It’s wild. Sometimes it feels like we’ve been together forever. It just works, I don’t know exactly what it is. It’s crazy though. Our first tour in Japan, we’re told that we’re facing the Bucks on pay-per-view for the titles. It’s been nuts.

Some people consider the IWGP Junior tag titles to be the most important in the business right now. What did it mean for you to win those belts?
I still get made fun of by the guys. The camera shows my face, and I’m holding in tears. It was really cool for me, because my career has been so weird. Nobody believed in me, and now all this is happening. Honestly, more than winning the titles, that match meant a lot to me. It was our first PPV match in New Japan with – I don’t know how many people, but it was a lot – watching us, and they were all so into it. We weren’t sure if everything would connect the way we wanted it to. That, to me, was more important than the titles. It was such a cool moment.

You’ve definitely taken an odd path to get to this point. When you first debuted in WWE as part of the Dudebusters, it seemed like you guys had a lot of momentum. Why didn’t it work out?
I was too young to even be there in the first place. If you’re going to get over in WWE, you need a push to help you get over, especially if you’re not a guy who spent a long time on the indies and knows how to get over on your own. To be signed at 20 years old, I just wasn’t ready. As far as the Dudebusters, we debuted on ECW, and then ECW was done within a couple of months. We move to SmackDown, and nobody there really knew what to do with us. We were just given to them when they already had their guys. So it was just weird timing, and a weird situation. I was too young to stand out. If I did it now, it would’ve been a totally different story, but I was just a kid.

So you feel like it was solely because of your inexperience?
I think a big thing is just my personality. I’m really bad at making friends with my bosses. I feel like it’s a fake friendship. I’m not good at politics or whatever you want to call it. Maybe that hurt a bit, but I’m not really sure. I thought I was having some good matches, but that’s just the way things work out.

When you were released, you seemed almost relieved that you were gone from the company, and I know you weren’t happy that you had been sent to NXT. With the way NXT has changed, do you think you would’ve been happier staying there?
I would have, but you know what? I don’t think I was ready for that. I don’t think I would’ve even been ready for something on NXT. I was bitter that I was sent back down. I had a really shitty attitude to be honest. So, in a way, being released was the perfect thing for me. I’m definitely not bitter anymore. I think that in the ring, things are coming together more. It’s a slow process to get everything down. 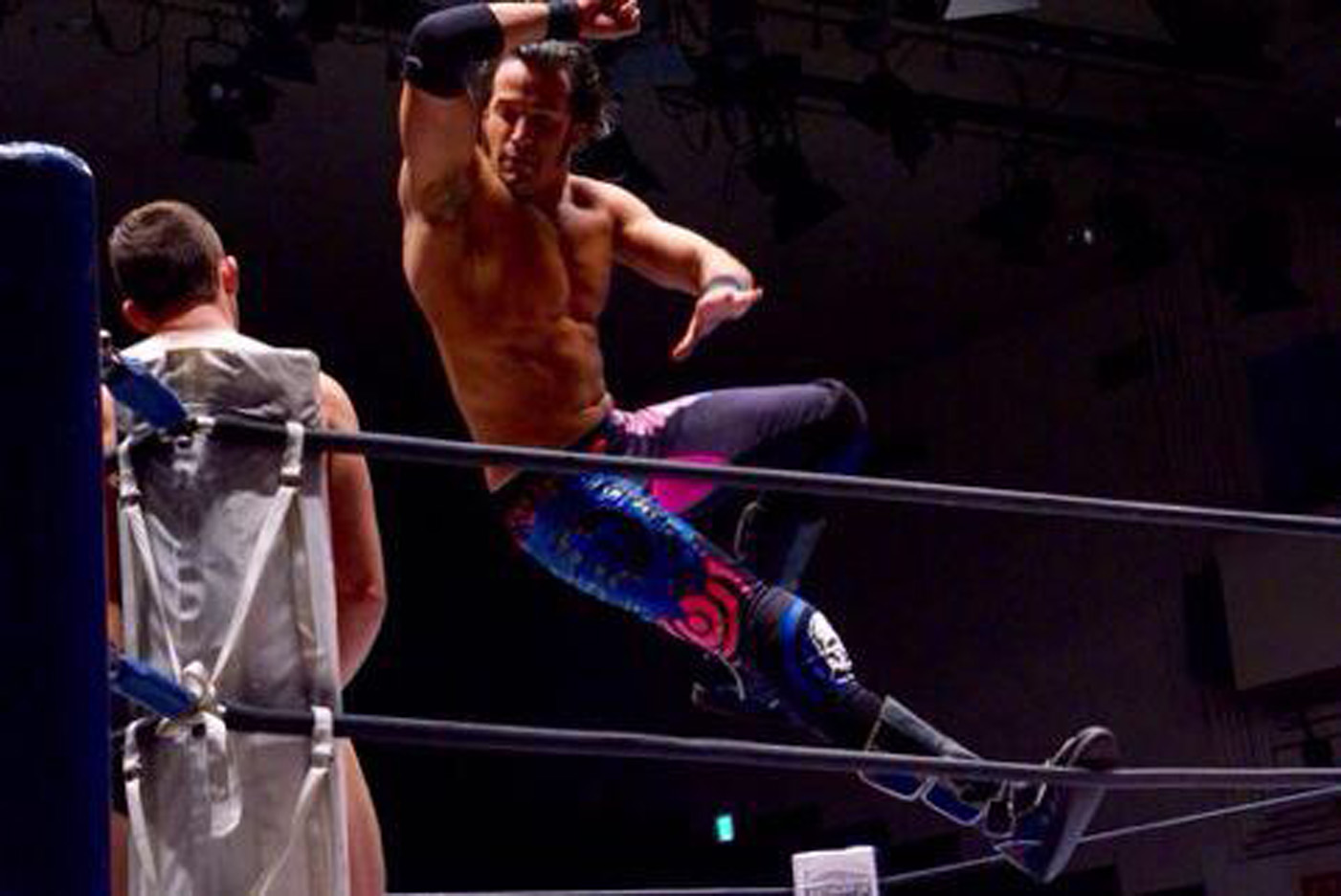 Some people thought that when you left, you’d be snapped up by a single company. Instead, you’ve worked with many different organizations. Was that your plan when you left?
I had absolutely no plan at all. I just wanted to see what would happen. It just worked out that I’m pretty much everywhere right now, and I’m really enjoying it. It’s great. I really enjoy the schedule. It’s tiring, that’s for sure, but everyone that’s working in wrestling is doing a schedule like this. I wouldn’t do anything different.

What’s it like wrestling for so many different companies, each with their own style?
It’s definitely different. In PWG you have to go nuts, and do comedy spots and the crowd eats that up. There’s no way I could do that in Japan. I learned a slower style and pacing in WWE that I can use here. So many times guys are going so quickly, probably faster than they should be. So I can slow it down. I can’t do the things that some of these guys can do. I have to make things more of a story, and I really learned that in WWE. I really don’t know where I would be if I didn’t start in WWE. This is who I am.

You’re still young, would you be open to a return to WWE?
Yeah, absolutely, if they don’t hate me there. I’m a different guy than I was when I was there before. They’re a different company than when I was there as well. Of course I would go back. They’re the top wrestling company in the world, and I’m a wrestler. At the same time though, I’d be just as happy not going back, and doing what I’m doing now.

You started with New Japan during the rise of the Bullet Club. You seem like a perfect fit for the group. Why have you never become a member?
It’s actually pretty awesome, because now I get to work against them. We get to wrestle the Young Bucks all the time, and in my mind, they’re the best tag team in the world, and maybe even one of the best tag teams of all time. I can’t complain about that. And maybe I would fit in the Bullet Club, but wouldn’t I just be the third Young Buck? I basically am Matt Jackson, we’re the same guy!

While you’ve had some good singles runs in your career, your biggest moments have always seemed to come when you’re part of a tag team – the Dudebusters, Roppongi Vice, or part of the Best Friends with Chuck Taylor. Do you consider yourself more of a tag wrestler?
It just seems to work out that way. Honestly, I think that I’m a better singles wrestler than a tag wrestler. Tag wrestling is so fast-paced, and I know that I can’t do the things that the Young Bucks can do. In a singles match though, I can go slower and tell a story. I can barely keep up in some of these tag matches. I don’t know why it works out that I’m always a tag wrestler, but I’ll take it. I feel like I’m better in singles matches though.

Even though you don’t consider yourself a tag wrestler, I feel like you’re part of a revitalization of the tag division that ranges from the indies all the way up to WWE. What do you think has sparked this rise in tag wrestling?
Honestly? I think you can point to the Young Bucks as a big part of it. They’ve made tag wrestling popular again, almost on their own. For real. They kind of made a new style of tag wrestling. Things are going at such a fast pace, and you don’t know what’s going to happen next. It’s almost like a wild stunt show. They have a lot to do with tag wrestling being as popular as it is right now.

I can think of a few wrestlers who, like you, were in WWE at a young age, became bitter when they were released and that bitterness stayed with them. How have you avoided that?
I never hated wrestling. That was the key. Even if I’m not in WWE, I can still wrestle an indie show in front of 100 people and enjoy it. I just go out there, and try to steal the show and go as hard as I can every time. That’s what I do. I’m a wrestler, and not just a WWE wrestler. This is what I do, and what I love doing. That might be the difference. This has been my best year in wrestling so far, so hopefully the next year is even better.