MLB Players Weekend: Everything You Need to Know - Rolling Stone
×
×

If you’re a baseball lover, you might already feel the buzz. This coming weekend, August 25th-27th, MLB and the Major League Baseball Players’ Association are holding the inaugural “Players Weekend” with all 30 teams participating.

But it’s more than just a celebration of the national pastime. The first Players Weekend also marks a chance for baseball fans to get to know their hometown players a little better, as well as a chance for players to showcase some of their personal style, and speak to fans about their love for the game.

“We’re really in the heart of a transition to a next generation of players,” says Chris Marinak, Major League Baseball’s executive vice president of league economics and strategy. “Right now there’s a lot of young guys just starting the game that are making an impact, and others that are going to be future Hall of Famers.”

Marinak says that even after last year’s retirement of Boston Red Sox giant David Ortiz, and fairly recent retirements of other legends like New York Yankees superstar Derek Jeter, the game is growing. It’s all thanks to a bumper crop of new and exciting players, as well as the game’s diversity and mixed styles of play. Marinak points to young players like Bryce Harper of the Washington Nationals, who at age 24 is already a five-time All-Star and one-time National League MVP. Then there’s Aaron Judge of the Yankees, and Los Angeles Dodgers wunderkind Cody Bellinger, two rookies who are reshaping the game – and sports headlines – each day.

But Players Weekend isn’t only about highlighting perennial all-stars and tomorrow’s marquee names. Equally celebrated are the hometown fan favorites, from starting pitchers and lesser known relievers, to MVP-caliber sluggers on down to the multi-positional utility man and the trusty platoon player. Marinak says that each one has a story.

“We wanted a way to accelerate the process of fans getting to know them,” he explains. “We have 800 players in the Major Leagues and each one of them has a unique story that fans, at every local level, can make a connection with.”

What you’ll see when you tune in to watch baseball this Friday, Saturday and Sunday are regularly scheduled games, while teams continue to be locked into the late August rally onto winning divisions and playoff spots. But each team will be a wearing a special edition Majestic Athletic brand Players Weekend jersey, an alternate pullover shirt cast in a brighter version of team colors, with a little bit of personal touch. 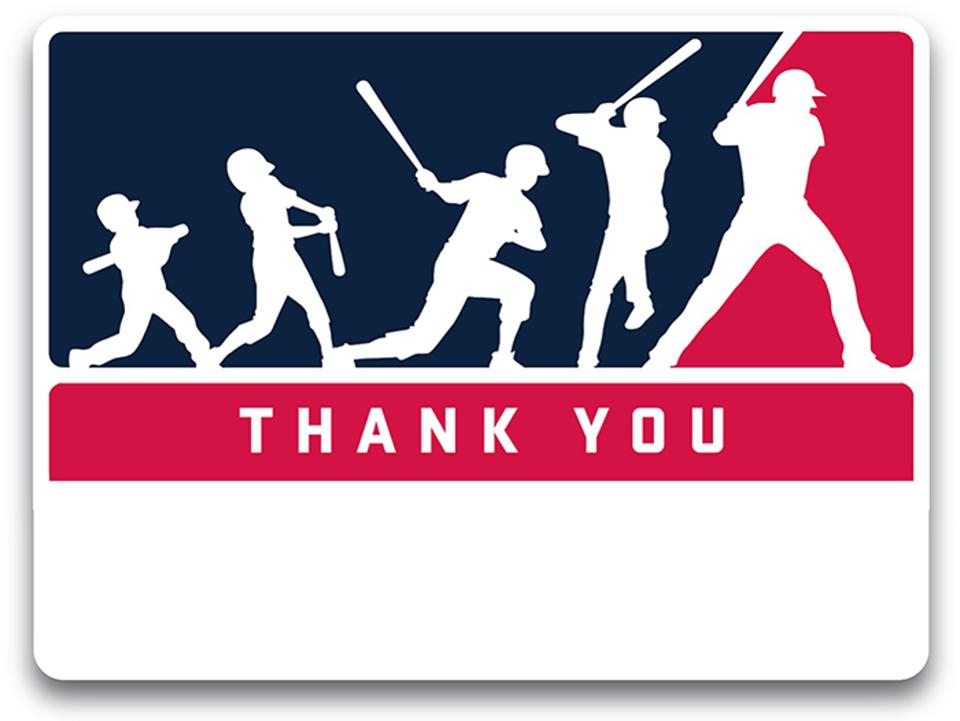 On each player’s right sleeve will be a special Players Weekend patch with the words “Thank You” and a space in which players will write in the name of a person critical to their personal development.

Christian Yelich, Miami Marlins 25-year-old outfielder, says that without a doubt “Mom” will be written on his jersey’s Thank You patch. Yelich tells Rolling Stone that his family has been the greatest influence on his path in baseball – and throughout life.

“Family’s been big for me ever since I started playing,” Yelich says. “And I think that’s going to be something a lot of players will have on their shirt, a name of a parent or family member.” Yelich also shared an anecdote about his very early days at the plate.

“I almost quit playing baseball when I was six or seven because I was scared of the ball,” he admits. Yelich, who grew up and played little league baseball in Thousand Oaks, California, said that as a young tot he wouldn’t step close to the plate or take swings. But eventually his parents’ encouragement, and certain incentives, took over.

“My parents kept pushing, and one time they offered me five bucks if I would hit the ball,” Yelich says. By the next game, thanks to his parents’ persistence, he swung and got his first little league hit. “It traveled only a few inches off the bat. But after that one [plate appearance], I wasn’t afraid of the ball anymore.”

Just like Yelich, Cleveland Indians starting pitcher Carlos Carrasco says he had the same kind of encouragement from his family at a very young age, starting the game at age 4 in his native Venezuela.

“It was my mother – an amazing, incredible woman – who took me my first time to the baseball field, because she wanted me to play baseball and learn to enjoy and love the game.” Along with seeing him off to practice and watching his every game, Carrasco said his mother would “catch me in the bullpen” Carrasco, who started pitching at age 11, would warm up and prepare to pitch with his mom as his catcher.

Carrasco also mentions too that it was a coach that got him pitching in the first place. He said that a friend of his father, named Luis Montero (no relation to Venezuelan Toronto Blue Jays catcher Miguel Montero), was the one who spotted Carrasco’s strength and poise as a third baseman.

“[Montero] saw me throw to first base and said during a game, ‘OK, we’re gonna do this now,’ pointing to the pitching mound.” According to Carrasco, during that scratch debut he threw a 75 mph pitch. By the age of 16 – with lots of “coaching, running and lifting,” fostered by Montero – Carrasco said he could throw controlled pitches in the 90 mph range.

Not surprising, the Thank You patch of the Indians starter will read “Mi Familia,” or “My Family,” in Spanish.

“Little league was a great experience for me,” Carrasco adds. “I was fortunate to have good people and family look after me in baseball.” 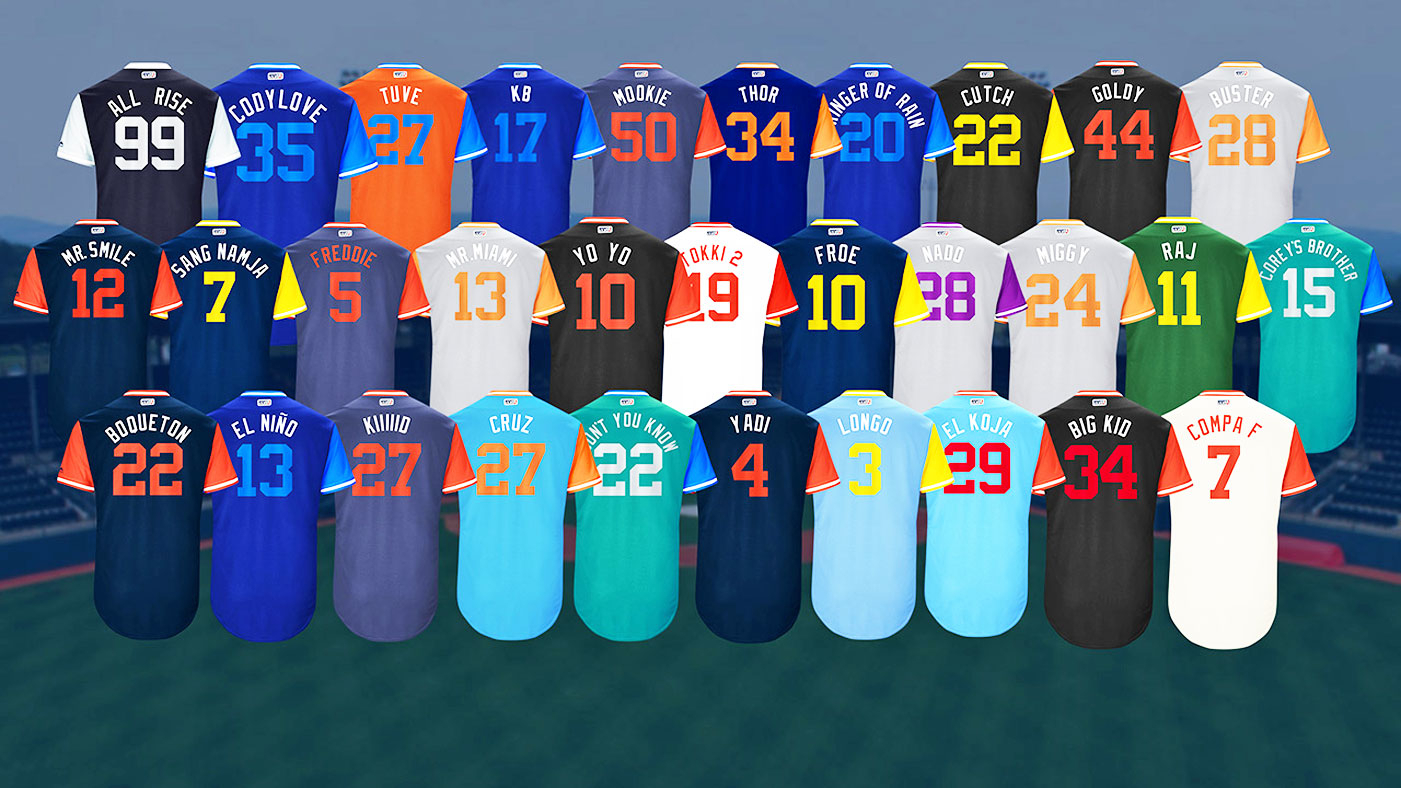 What’s in a Nickname?
One of the other things that has been buzzing about Players Weekend is the nicknames. Each player was asked by Major League Baseball to select a nickname to be worn during Players Weekend games on the back of their shirt.

Some players have, of course, opted for what may pass as fairly standard stuff. There’s Cubs’ star Kris “KB” Bryant, Andrew “Cutch” McCutchen, and Milwaukee Brewers star Ryan Braun, who will wear the nickname “Ocho” because he also wears Number 8. Yelich, who has spent his entire Major League career with the Marlins, goes by “Yeli,” which he will wear this weekend.

But some nicknames are more creative than others. A few of the best are the product of wordplay such as “Knapp Time,” to be worn by Phillies catcher Andrew Knapp, or those of Marlins pitcher Wei-Yin “Weigh-In” Chen, and Dodgers closer Kenley “Kenleyfornia” Jansen.

Wearing nicknames instead of surnames on jerseys isn’t entirely new in sports. Nor it just a legacy of the long-defunct XFL football league, or today’s roller derby. Paul Lukas, a well-known writer on all sartorial matters in sports, has catalogued on ESPN’s Uni Watch blog that nicknamed jerseys were somewhat prevalent in 1970s pro basketball and baseball. Additionally, the NBA toyed with nicknames a few years ago, letting LeBron James be “King James” while Kevin Garnett went as “The Big Ticket.”

Many of the nicknames you will see this weekend are derived from players’ actual names, or even a little bit of good old-fashioned sports bravado. But some come from the great stories that just happen during a 162-game baseball season. Carrasco, when asked about his nickname, mentions a 2011 away game as his inspiration.

“I won a close 1-0 game against the Yankees, and we were coming onto the plane back to Cleveland,” he explains. “One of the flight attendants put on my seat about 10 cookies and said, ‘That’s for you, since you won the game!'”

Thereafter, Carrasco said that Indians closer Chris Pérez kept calling him “Cookie” the entire flight home – and it stuck. “Everyone suddenly forgot my name, and it was Cookie, Cookie, Cookie!” Carrasco said. “So now if someone says Cookie, they know it’s me, Carlos Carrasco.”