The Topps Archives Collection: Cashing in on the Past - Rolling Stone
×
×

Over the course of 75 years, Topps has been in the business of pretty much everything: Bubble gum, Garbage Pail Kids, cowboy collectibles, comic books, Menudo (we’ve still got our Ricky Martin rookie card) and, ever since salesman-turned-executive Sy Berger designed the first annual set of cards in 1952, baseball.

But rarely have they been in the business of themselves.

That all began to change in April, when, after a few tentative dips in the nostalgia pool, Topps dove in with the launch of the Archives Collection, a retro-leaning series of cards, clothing and collectibles centered around iconic baseball teams of the past three decades – and the company’s essentially untapped archives. It’s an ambitious step for a brand that now draws a large percentage of its revenues from so-called “entertainment products” (WWE and Star Wars trading cards, the resurgent GPK franchise, etc.), and it’s being helmed by a 24-year-old designer who admits he hasn’t collected baseball cards in years.

“I grew up a Mets fan, so I used to be into cards. I remember the hobby shops, and I’ve got binders at home. But after that, I didn’t really pay much attention to baseball cards, or collect them,” Michael Linkens, the Archives Collection’s art director, said. “Our digital team, none of us collect, and we know that most sports fans don’t. But we have this iconic, American company, it’s rooted in nostalgia; so we knew there was something there.”

So beginning last year, Linkens and a team of designers began a deep dive into the Topps vault – not to mention eBay’s vast expanses of ephemera – in an attempt to create a collection that spoke to diehard collectors and lapsed fans alike. They studied merchandise (“There were a lot of caricature shirts,” he laughed), photography and typography from previous decades, gathered “intense, baseball-nerd information” about various eras, and eventually decided to focus on seven teams, each of which defines a specific time and place in baseball lore.

“It’s not just winning teams, because there’s a winning team every year, but it’s the teams that transcended baseball and hold a spot in American culture. They represent a city and an era,” he explained. “The ’84 Cubs, they didn’t make it to the World Series, but they’re an important team in Chicago’s history. The ’74 A’s all had those moustaches. The ’77 Yankees were a circus. The ’86 Mets were called ‘the Bad Guys.’ These are teams that people had an emotional connection with.” 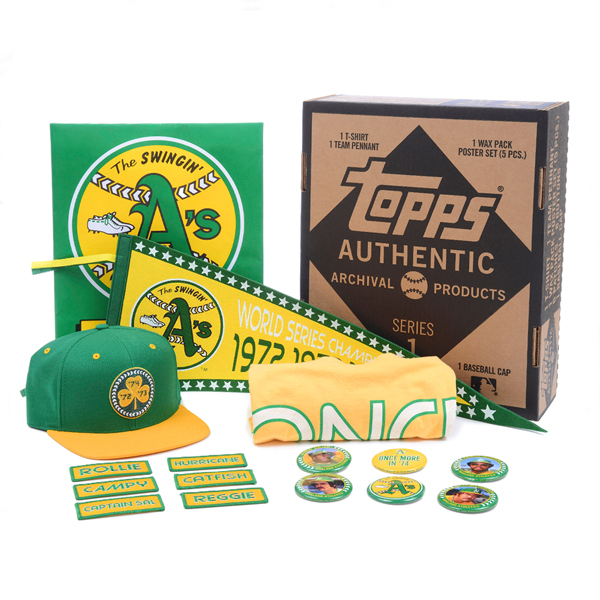 The hope, of course, is that they’ll also connect on a commercial level, too. Since the great collector’s boom of the ’80s and ’90s (who among us didn’t covet the Ken Griffey Jr. rookie card?!?), the trading-card business has largely gone bust, and relying on baseball alone just doesn’t cut it anymore.

“I’d estimate [that during the boom], people spent billions on card products and related items. Everyone and their grandma produced cards and collected cards, mostly in hopes of striking it rich,” Tom Bartsch, editor of Sports Collectors Digest said. “Living on baseball, basketball and football cards alone is no longer a viable business practice. There has to be other avenues. Topps [has] a large entertainment-card division, moved in UFC cards and they’ve branched heavily into wall décor items, online applications and other forms of media.”

So far, Topps’ plan appears to be working. Linkens is currently working on a second Archives series that will feature four new teams – the ’75 Red Sox, ’80 Phillies, ’82 Cardinals and ’87 Twins – and there are plans to expand even further in 2015. And while the Collection may not single-handedly determine Topps’ future, it will go a long way towards reclaiming its heritage, and establishing the company as leaders in an equally important area: Authenticity.

“I want the Collection to be looked at as the vinyl record of sports. I want it to be for fans who just don’t buy a hat because it’s the right color or something, but because they’re a diehard fan who appreciates history and American culture, retro design,” Linkens said. “All kinds of brands talk about ‘authenticity,’ even ones that don’t have it. But Topps does. We were established in Brooklyn, we’ve been around for 75 years. It’s real.”