The Super Bowl's Secret Army: How the Big Game Gets Built - Rolling Stone
×
×

Bill Thompson is sitting inside Levi’s Stadium ten days before Super Bowl 50. He’s not a coach, a player, or even an employee of the NFL, but he has played a hand in shaping every Super Bowl for the past 19 years. Now, sitting freely in a seat that will cost someone else $4,835.55 in ten days, he calmly acknowledges the fact that the past ten months of his life will essentially come down to four hours on Sunday, February 7.

“This football game is the only thing that matters to every single one of the 100 million viewers on game day,” he says. “It culminates all year round. And this year, it’s been culminating for 50. This is the event of the half-century.”

A project manager for Noel Lesley Event Services, Thompson and crew are in charge of Super Bowl game day facilities. It’s a job that requires ensuring the success of all things Super Bowl – from halftime entertainment (which means wrangling the orbiting planets that are Coldplay, Beyoncé and Bruno Mars onto a starship of a stage) to on-location hospitality to media access outside the stadium. “Our responsibility is answering the question, ‘How do you bring the Super Bowl to the world?'” he says.

The Accidental Evolution of the Super Bowl Pregame Show

The Noel Lesley team has been answering that question since 1985, when the NFL contracted them to construct Super Bowl XIX. Now, they have 30 Big Games under their belt. Thirty media days. Thirty national anthems. Thirty halftime shows. Thirty presentations of the Lombardi Trophy. And every year has to be bigger, better and more impressive than the last. They have 100 million people to impress…probably more than that, considering every Super Bowl since 2010 has culled well above 100 million viewers and this is the game’s golden anniversary.

Back in 1997, the year Thompson built his first Super Bowl with Noel Lesley, the crew was 20 members strong. There were five trailers of building materials. “It’s been an evolution,” he says. “Now we have 125 people on-site every day. There are two guys who do nothing but weld everyday for 12 hours. We have 12 carpenters. Four electricians. Just today I received 30 truckloads of materials.”

You get into the stats and they boggle the mind. The build at Levi’s Stadium has required 2.5 million pounds of ballast for the tents outside the stadium and scaffolding, two miles of concrete barriers around the perimeter of the stadium for security, 600-plus hours of labor per worker over two months’ time, six miles of fencing and 70 temporary office trailers on-site. The team spends 10 months drawing up designs, creating checklists and finalizing plans before moving into the host city for the months of December and January in order carry out those plans. These guys aren’t your conventional party planners. 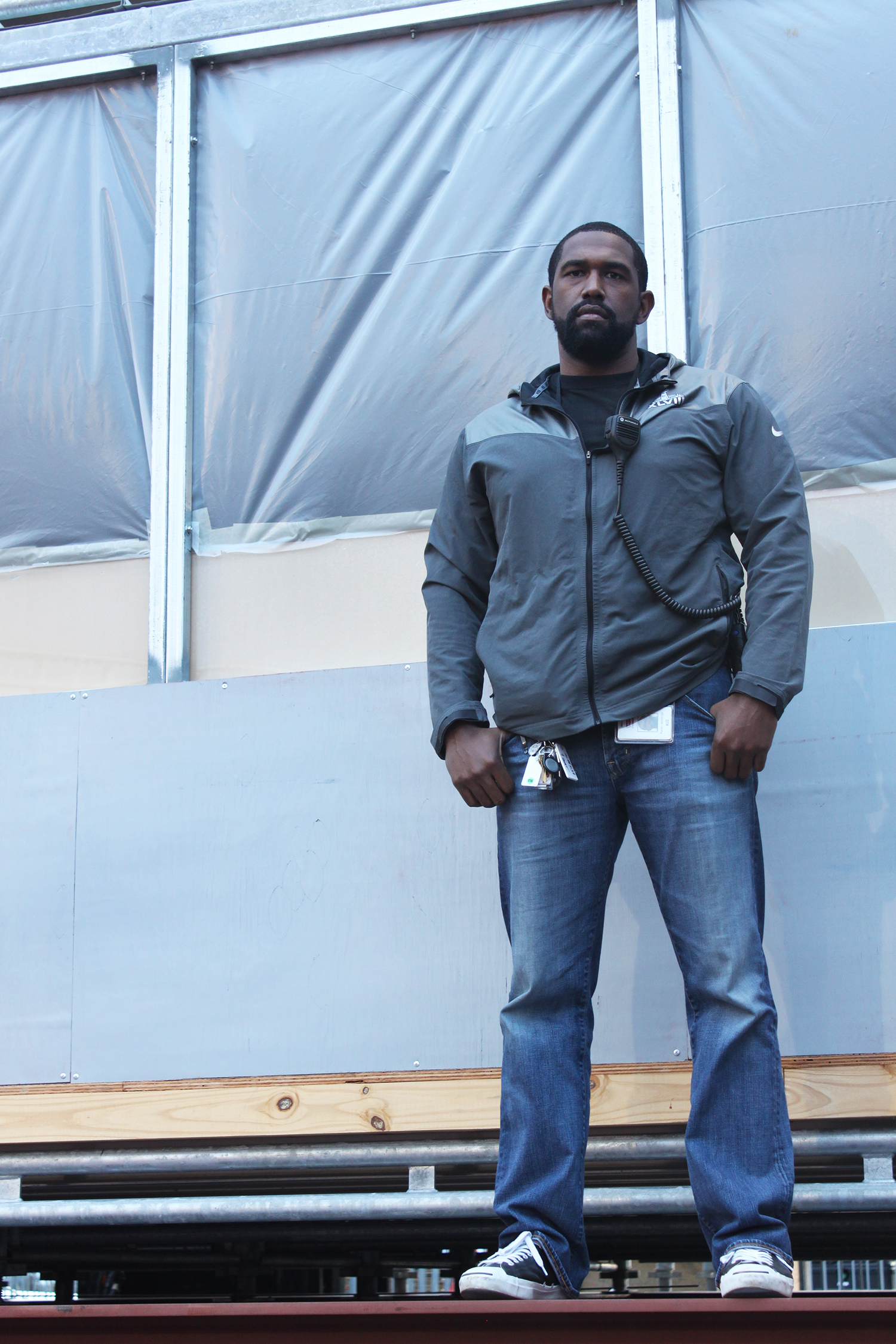 “We have to make it work because no matter what, that game is going to come on,” says Kevin Jennings, the project manager of exterior game day facilities. “It’s our job to make sure that no matter what changes, if kickoff is at 3:25 on February 7, at 3:24 on February 7 nothing stops that ball from being kicked.”

That means spending 12-14 hours a day on-site, working seven days a week to make sure there is plenty of beer to sate 75,000 thirsty fans in the stands, enough Internet access and desks to maintain livestream coverage for reporters and that every special requirement of the two teams has been appeased (a company favorite is figuring out where to put Thunder, Denver’s live horse mascot.)

“We have to think through everything,” Jennings says. “What if the weather is 10 degrees? How will we keep the cameras functioning? How can we make sure every seat has Internet connection? What if it rains? Is there enough beer? Are the goalposts perfect? Are there enough box seats? If I don’t do my job right then no one else can do their job right – reporters, players, stadium employees. It can come down to making sure that when you eat a hot dog in the third quarter and want to throw away the wrapper without missing a play, that I have thought to put a trash can at the end of that row.

“You just want a hot dog,” he continues, “and you don’t have to think twice about it – because I already have.”

Between accommodating the teams, the fans, the media and the NFL, carrying the load of building the Super Bowl requires a certain set of shoulders. While 600-plus hours of labor does add up in the bank account, these people aren’t here for the money.

“It’s a tough job,” Thompson says. “Not many people in life can handle more than a 40- or 50-hour week, and these guys do that every week for two months. Most people work to pay their bills, but everyone who is here is here because they believe in the game. If you don’t believe in it then you won’t last.”

“Yeah you make money, but you don’t have a minute to spend it,” Jennings adds. “It doesn’t matter what you’re getting paid if you don’t have the spirit to serve. If you can’t put something ahead of yourself then you cant do this.” 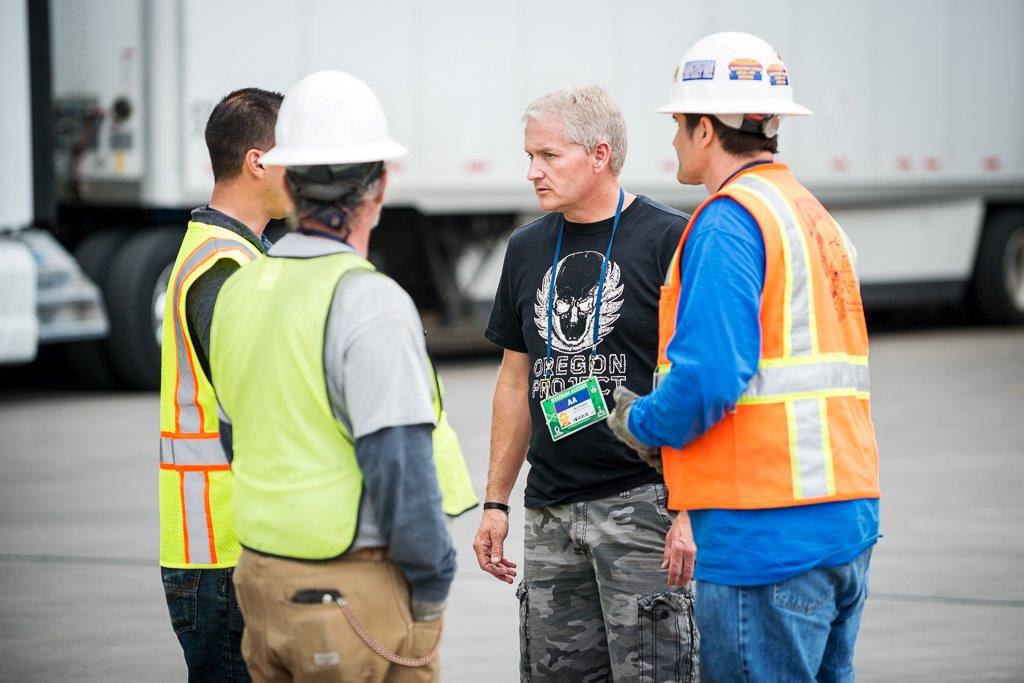 Both Jennings and Thompson have made the requisite sacrifices over the years. Jennings’ daughter was born right before his first Super Bowl as a Noel Lesley staffer in 2011. He came home the week before she was born, had to leave the week after and was gone for the next two months. “The biggest personal challenge of this job is not being there to do stuff for her,” he admits. “We live on the East Coast and the time difference has been hard since I’m here in California.” He now wakes up every morning at 4 a.m., goes to the gym, showers and makes a ten-minute FaceTime call home to Miami to say good morning in between his workout and his drive to the stadium. By the time he’s done for the day, it’s too late to say goodnight.

“I keep the clock on my laptop set to East Coast time, so I can always know where she is at in her day,” he says. “You can’t lose sight of what’s important.”

For Thompson, his Super Bowl-stamped schedule became imprinted on his son – who was three when his father started his yearly winter migration to the Big Game – in a way that he couldn’t have anticipated when he was laying concrete at the Superdome in 1997. His son, Kenneth, is now working alongside him at Levi’s Stadium.

“To see what he goes through every day and the amazement that he has is incredible,” Thompson says. “I laugh because I recognize the exuberance he has when looks at something on the field that he built. It makes me realize that no matter how long you do this, you don’t lose the energy. Over the years that amazement simply turns into accomplishment.”

And a sense of accomplishment is often the greatest reward. After all, the crew isn’t inside the stadium for the game itself. They usually end up watching the spectacle as many do – gathered in front of TVs in their work trailers or in their temporary apartments.

“Game day is a bittersweet moment for us. We’ve been working two months straight, we’re done and thinking, ‘Man, I just wanna sleep,” Jennings says. “But the best moment of it all is going out on the field before the gates open. It’s empty, and all you hear are people just screaming outside. That energy is amazing. You know that everyone ­who comes to this game knows this is a one-time opportunity.”

“The point of this is building hopes and dreams. It satisfies a basic need to be part of something larger than yourself,” Thompson says. “The [Super Bowl] stories are rampant. Those are the moments that make us feel like we won – we just don’t get a ring.”