Last night in Denver, a leading MVP candidate was driving his team down the field late in the fourth quarter, looking for a touchdown to swing the momentum his way. He called the play, barked out the snap count, but it was utterly pointless: This was a concert where only sign language had an authority. He threw towards the end zone, for what could have been a defining moment in his phenomenal season.

But instead, Philip Rivers, the QB in question, was intercepted by Rahim Moore and the Chargers not only left Denver with a 35-21 loss, but the knowledge that they remain a step behind the Broncos. Probably more like six steps. Don’t fret, Philip. That’s better than most teams right now.

Don’t let the prevailing wisdom about Thursday night games (i.e. they are always garbage) fool you: Denver’s win had nothing to do with what day it was, and everything to do with the fact that there isn’t another team in the NFL that can match the Broncos’ talent this season.

Nobody will forget how last season ended for Denver – a 43-8 loss to the Seattle Seahawks in the Super Bowl XLVIII – and while the cliché would be to follow that statement with “least of all, Peyton Manning,” that’s not really the truth. Manning remembers. But so does John Fox. And John Elway. And the Broncos fans; they definitely remember too.

And they have all used the memory of that domination to change themselves from the best team in the AFC (a moot point against the top three or four teams in the NFC a year ago) to the clear-cut best team in the NFL.

If this season’s Super Bowl were played today, Denver would be favored by at least a touchdown over any other team in the league. The gap between them and second-best is just that big (as was evident on Thursday night), and the person largely responsible for the product on the field also happens to be the guy that helped lead them to back-to-back Super Bowl wins in the late ’90s.

When Elway saw the Broncos score one touchdown and lose by 35 points to Seattle, he didn’t try and find a way to make Manning and the offense better; there wasn’t really much room for improvement, anyway. Instead, he set out to create a defense capable of being just as effective as the Seahawks’ unit was against Manning.

Amazingly, he may have pulled it off quicker than Seattle did.

By signing DeMarcus Ware, Aqib Talib and T.J. Ward in free agency, and seeing the return of Von Miller, the Broncos came into Thursday’s matchup having held opposing QBs to a passer rating of 80.6, even though they had faced the likes of Andrew Luck, Russell Wilson and Colin Kaepernick. Rivers threw three touchdowns on Thursday, but had just 6.1 yards per attempt and two interceptions. 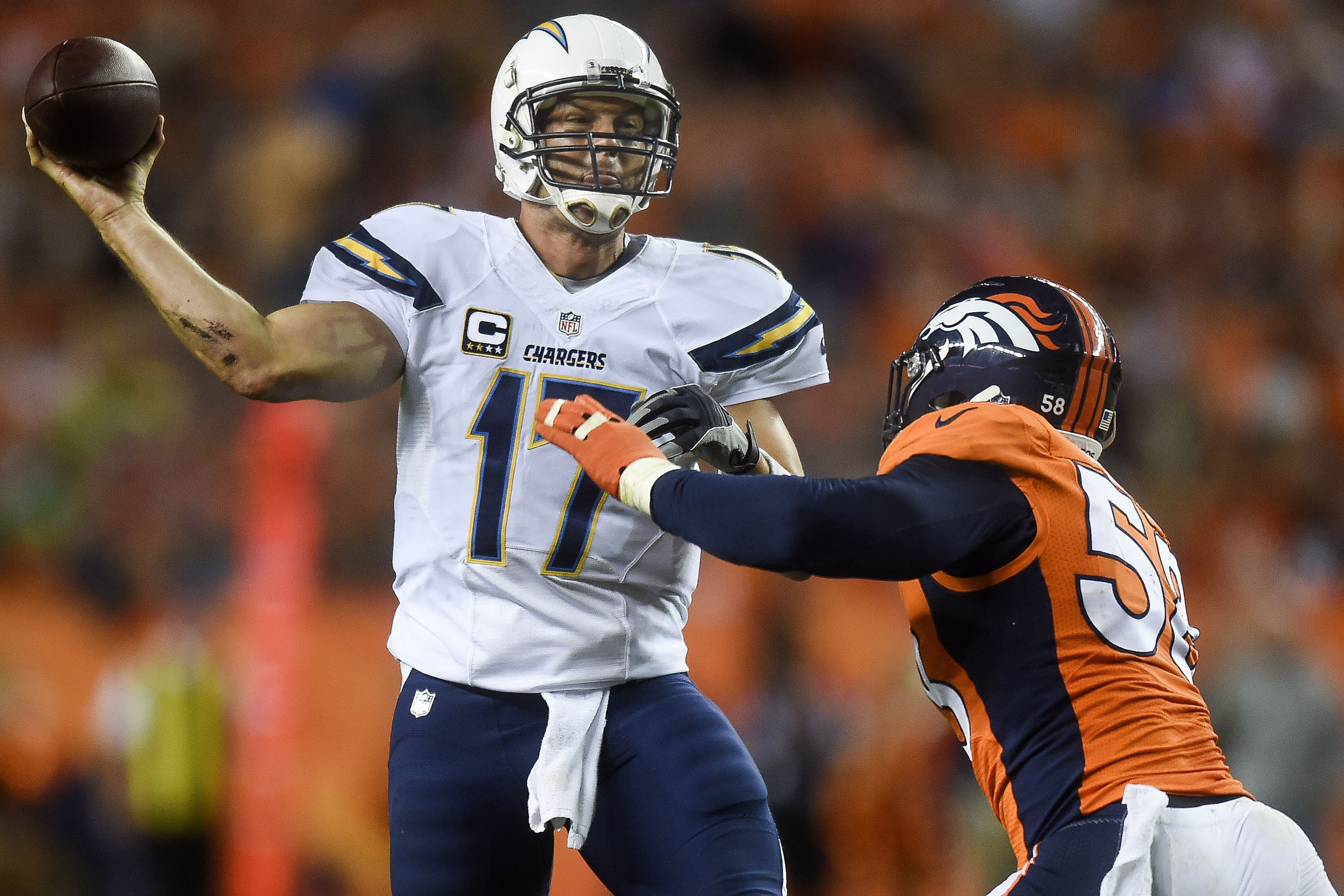 After the game, cornerback Chris Harris described Denver’s defensive identity thusly: “We’re gonna stop the run and then force you to throw at Talib and me.” Like clockwork, San Diego rushed for just 61 yards, and Rivers was forced to throw; his 41 attempts were a season high, and so were his two picks (heading into the game, he’d thrown just three all year). Moore’s interception snuffed out a late Chargers rally, setting up a clocking-sapping drive by Manning and the offense.

Schematically, it’s not hard to see why the Broncos finally have a defense to pair with their top-flight offense. Elway’s efforts to improve the roster can’t go unnoticed, but there’s more to it than that. This isn’t just a story about players or statistics or botched Super Bowl snaps. This is a story about the will of a fanbase.

This past Sunday, Chicago Bears offensive lineman Kyle Long ripped fans not just for booing the home team, but for their lack of audible expression when the Miami Dolphins had the football on third down. You won’t hear any such complaint from the Broncos. There’s a rumble in them hills.

Over the last 30 days, I have attended NFL games in six different stadiums – including last week’s Chicago debacle – and none shook like Denver’s Mile High (or Sports Authority Field, whatever). It’s fair to say that part of the reason for that had to do with odd luck; four of the five home teams I had previously watched lost, but it’s not just about fans celebrating when things go right. It’s about becoming a part of the game to help them go right in the first place.

“It’s all about that 12th man,” Ware said after the game. “When you have that electric heartbeat of the Denver Broncos fans, we can’t hear. But we don’t need to worry about hearing. Can the offense get all their checks? Sometimes they might have a wrong read. So just having that crowd loud, it’s really big.”

That noise played a part in Moore’s final pick – “As long as the offense is flustered, we’re good,” he said after the game – and San Diego’s offense was clearly off their game throughout. Rivers was averaging 8.5 yards per attempt heading into Thursday, and he threw multiple interceptions for the first time since November 3 of last year.

In fact, in three games against the Broncos last year, Rivers had five touchdowns and no interceptions. The new faces are clearly making a difference, but having a defense that makes 75,000 people want to shake it off like T-Swift doesn’t hurt either. The Denver team that lost to the Seahawks in the Super Bowl finished 22nd in points allowed and 19th in yards allowed.

This team came into Week 8 ranked sixth in both categories and they did a much better job on Rivers than Seattle’s once-feared secondary did in Week 2. The Broncos are already 5-0 at home, but they’ll be tested over the season’s final two months, as they play six of their next eight games on the road. The fans will be missed.

Perhaps overhauling their defense in the offseason isn’t the only reason the Broncos are starting to resemble the team that crushed them back in February. Maybe that “Mile High 12th Man” has got something to say about it too.