The End of the NHL's Enforcer Era - Rolling Stone
×
×

Last Wednesday, the National Hockey League began its 97th season of play with a fight.

In the Flyers/Bruins game, Boston’s Bobby Robins – a lifelong minor-leaguer making his NHL debut at the age of 32 – charged in and threw what was deemed to be an illegal hit on Philadelphia’s resident tough guy Zac Rinaldo, a man with 31 NHL fights to his credit. Though Rinaldo would usually be the one to charge back himself, it was teammate Luke Schenn, good for maybe a scrap or two per season, who stepped up and took the beating from Robins in Rinaldo’s stead.

Robins (and Rinaldo to a certain extent) are what’s known throughout hockey as classic enforcers. They can skate a little bit, will maybe pop in a goal or two, but are there primarily to “protect” his teammates from the other team’s goon. Of course, when one fighter takes a cheap shot at another, that forces another player to answer the bell, a sort of Hammurabi’s Code of Hockey that also reveals the obvious flaws in the whole “enforcer” concept.

Fighting will always be a part of the game; speed and skill are the NHL’s selling points, but brawls are what set it apart from the rest of the American sports landscape: In many ways, hockey seems to be the last vestige of a bygone era, a tough, taciturn exercise in attrition, a war fought by “men with clubs in their hands and knives laced to their feet,” as sportswriter Paul Gallico once put it. Yet, it appears that those men who exist solely to fight – and the culture that celebrates them – are fast fading from today’s league.

According to hockeyfights.com, there were 0.65 fights per game and 803 fights total in 2001-02. Last season? Just 469 fights, down to 0.38 per game. Before the beginning of the season, countless players mostly known for dropping the gloves – Toronto’s Colton Orr and Frazer McLaren, New Jersey’s Cam Janssen, Philadelphia’s Jay Rosehill – were all cut. The Los Angeles Kings, winners of two of the last three Stanley Cups, have no such designated player on the team. And Boston demoted Robins to the AHL yesterday.

There are several reasons for this, including NHL rules forbidding the removal of helmets during fights and a growing awareness of the far-reaching impact of traumatic brain injuries. The latter of which was apparent in the public outcry that followed the death of former New York Ranger Derek Boogaard, who passed away from an accidental drug and alcohol overdose after suffering multiple concussions during a career that featured 66 fights in the NHL and nearly 100 more in the minors. 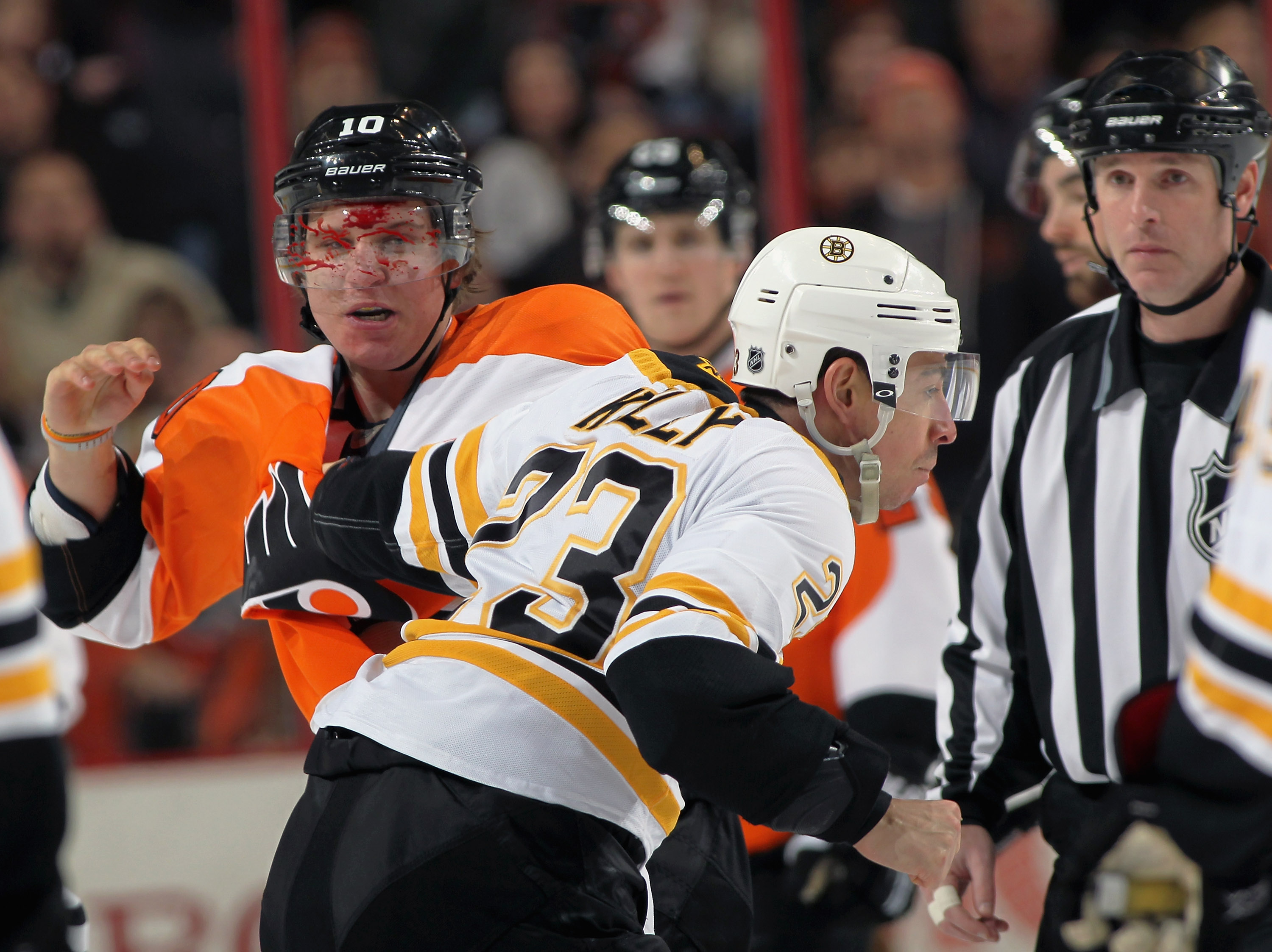 Boogaard is the subject of a recent book, John Branch’s Boy on Ice: The Life and Death of Derek Boogaard, which posits that the concussion troubles that led Boogaard to drink and drugs could’ve left him “fighting off the effects of dementia, maybe as early as in his 30s.” The situation mirrors the ones that we’ve seen involving retired NFL players. On August, 14 different lawsuits filed by former players against the NHL were consolidated in the United States District Court in St. Paul, Minnesota.

Of course, this end might actually be more of an evolution. Pure punchers are on the way out, replaced by the likes of Boston’s Milan Lucic, Vancouver’s Alex Burrows and Toronto’s David Clarkson: guys who don’t necessarily fight, but are Grade-A pests, and, more importantly, are capable of changing a game with their play.

“You need to have a fourth line that is contributing – not just energy, passion and presence – but offensively, so that you can have moving parts in your lineup.” NHL analyst Billy Jaffe says. “When someone goes down, your 12th forward can’t be somebody that cannot play. Hockey in general is trending away from fighting, so you need someone who has at least that dual purpose.”

Take, for example, Jordin Tootoo, a winger who made the New Jersey Devils after a year spent mostly in the minors. He’s someone with dozens of fights to his credit, but he knows that if he wants to stay in the NHL, he’s got to do more.

“The game’s definitely evolved over the last couple years, and you’ve gotta adjust,” he told me after his season debut against the Flyers on Thursday. “I know I can play, I can make plays out there and contribute defensively. But, at the same time, my foundation is being a physical presence out there.

It’s a subject that remains of hot debate in NHL circles, but the tide appears to be turning. Even NBC’s Mike Milbury – a man who once went into the Madison Square Garden stands and beat a fan with a shoe – has started to question fighting’s place in the game.

“As much as I liked a good scrap in my day, too many issues here involving concussions,” Milbury said on NBC’s first hockey broadcast of the season. “Too many problems. The teams are going away from it. Let’s grow up and get rid of it.”

Though many found the idea of Milbury talking down fighting rich, there is something to be said for his demographic coming around on this stuff. This could be the definitive end of the type of player solely around to fight.

Whether the public wants that to happen is another matter entirely. Perhaps due to pop culture’s portrayal of hockey, fights are celebrated by fans. Slap Shot is more or less the Kleenex of hockey movies, but even a film like Miracle depicted fighting between two of the members of the 1980 U.S. hockey team in practice. Then again, a more recent hockey flick – the aptly titled Goon – paints a far different portrait of the enforcer: It’s about a young, up-and-coming tough guy (Seann William Scott) who, in a climactic scene, faces off with a veteran (Liev Schreiber) who has to contemplate that he was beloved, but only known for the one thing he did well.

Given the way the NHL is moving, those fans may not have a choice in the matter – and the fighters they love might be faced with a choice: Evolution or extinction.