Like Paul Revere famously said all those years ago, “The Cruiserweights are coming! The Cruiserweights are coming!” Yes, a brisk two months after the brand split draft and the announcement of the division, the under-205 pounders are making their debut on Raw tonight, and they’re bringing a lot of deserved hype with them. Not only are the ten wrestlers that WWE is bringing in for this occasion all fantastic, but they’re riding in on a wave of goodwill after the massively successful Cruiserweight Classic tournament that just wrapped up last week. 32 competitors from around the world competed in a single-elimination tournament, culminating in a two-hour show that will be hard to top as the WWE event of the year.

After the dust settled, it was 18-year veteran T.J. Perkins that climbed the mount victorious, not only winning the inaugural Cruiserweight Classic, but also claiming the first-ever Cruiserweight Championship. TJP, as he’s colloquially known, will headline a division that also features indie workhorses turned NXT darlings Johnny Gargano and Tommaso Ciampa, Cruiserweight Classic instant favorite Cedric Alexander, and grizzled vet and Burning Hammer-thrower The Brian Kendrick. These were just the highlights of a roster that featured so many talented wrestlers that it was hard to keep track. Perkins himself said it best when we caught up with him the day after his victory: “31 other guys came in as my peers, and they legitimately are all peers of mine now. I’m huge fans of everybody I got to share the ring with.”

So, how did we get to a place where WWE is not just embracing cruiserweights and wrestlers from the independent circuit, but actively cashing in on their hype with a prestigious tournament and a titular division? It begins with two major promotions embracing the undersized competitor: WCW and their cruiserweights, and New Japan Pro Wrestling’s Super-J Cup.

In the early-to-mid 1990s, mainstream professional wrestling in the United States was about size and star power; the Undertaker, Kevin Nash and muscle-bound freaks like Lex Luger. These were all big guys with big personalities, which was fine and all, but it didn’t satisfy everyone’s cravings for wrestling. Some fans, maybe less of a percentage than in today’s internet era, wanted performers who honed their craft and could put on a 5-star classic at a moment’s notice. That’s the philosophy behind both the Super-J Cup, which made its debut as the creation of arguably the greatest Cruiserweight of all time (Jushin “Thunder” Liger), and the WCW Cruiserweights, which featured future megastars like Eddie Guerrero, Rey Mysterio Jr. and Chris Jericho.

These two endeavors brought lucha libre-influenced wrestling to the forefront, whilst not foregoing technical skill for flashy high flying; one of the stars of the WCW incarnation was Dean Malenko, aka The Man of 1,000 Holds. The influence these smaller performers had on the younger generation is clear; TJP himself claims that both the Super-J Cup and guys like Eddie Guerrero influenced his eventual ring-style and charisma (he also credits Shawn Michaels as the original “cruiserweight turned heavyweight,” and you can see HBK’s swagger in how Perkins carries himself in the ring). “The Super-J Cup was my jam, man, when I was younger,” said Perkins. “That was my everything. Many of those guys went on to form what was the early, more primitive time for the cruiserweights in WCW and really introduced the world to it. Guys like Eddie Guerrero, and the original Tiger Mask.” It’s hard to say that the Cruiserweight Classic would have even occurred if not for these men; hell, the entire independent wrestling landscape might be different if the original generation didn’t take flight 20-something years ago.

One thing that set the Cruiserweight Classic apart from WWE programming was the decision to forego any real heel/face alignments and complex storylines (aside from awesome yet ultimate generic pre-match hype videos that all boiled down to “I want this more than anyone” proclamations). All of its drama and intensity came from the in-ring action. It’s a completely unique way for WWE to handle one of its programs, as the larger-than-life characters were reduced to competitors fighting for a prize and for respect. And boy did it deliver. We could list all of the great matches that occurred over the last two and a half months, but how many times would you want to read “these two went out and tore the house down”? Because there were a lot of those. Instead, there were 3 matches that truly captured the essence of what the tournament, and the men competing in it, was hoping to achieve: Kota Ibushi vs. Cedric Alexander, Kota Ibushi vs. The Brian Kendrick, and Kota Ibushi vs. TJP in the second semifinal. Notice a trend? Yes, Kota Ibushi, the common sense consensus for CWC MVP, is that good.

Three matches in one tournament, all with different styles and storylines. Ibushi vs. Alexander told the easily-digestible story of the established favorite going up against the charismatic newcomer-turned-crowd favorite, and it played out like a ballet of violence. If you’re familiar with the match that blew up the internet earlier this year, it was the closest we got to Ricochet vs. Will Ospreay. Alexander immediately won over the Full Sail crowd and almost pulled the upset (that brainbuster two-count into an immediate KO kick was standing ovation-worthy) in what was the first true classic of the tournament. It set the stage for the later rounds, which would be filled with human drama at every turn. 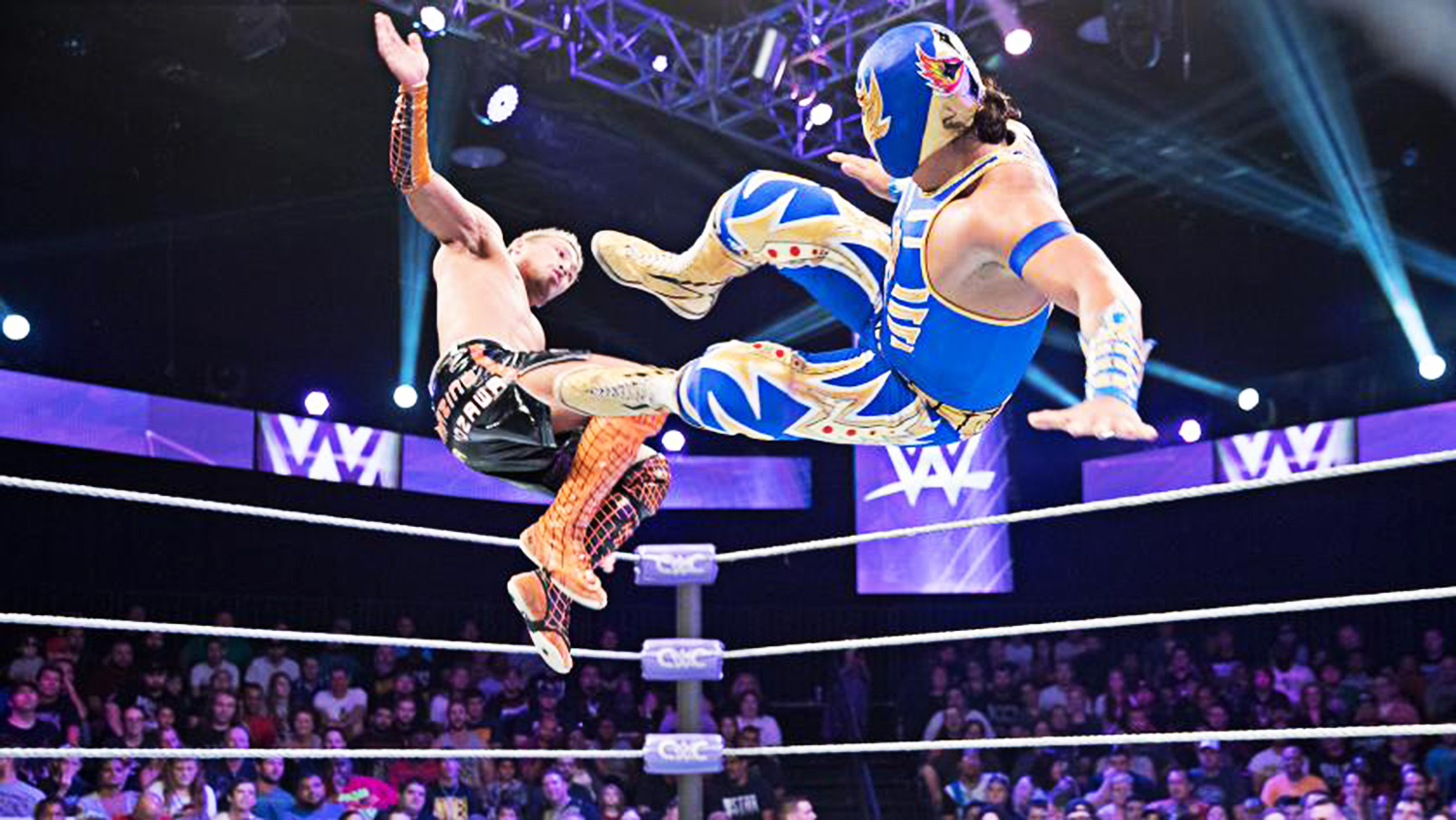 The peak of that was Ibushi vs. Kendrick, which saw Kendrick fighting against time and the Golden Star for what he called his last chance to revive his career. Most older wrestlers in a tournament like this could pull off a promo telling that story as well as Kendrick, but I’m not sure how many could pull off what he did in the ring. He wrestled like a man possessed, and it was the idea that his career could end that night that possessed him. When you’re entranced by the lure of something like that, you’ll do anything…like say, throw the most dangerous move in wrestling to try to win. Yes, in 2016, on the WWE Network, The Brian Kendrick connected with Kenta Kobashi’s Burning Hammer, and it was appropriately insane. Even though Ibushi was at least penciled in for the final night, every single person in the world bought that as the near-fall for two reasons: 1) it was a Burning Hammer 2) Kendrick had shown his desperation so well that you wanted him to win. And all of that was told inside the squared circle. Beautiful.

But maybe the best match of the whole tournament was Ibushi’s semi-final clash with the eventual champion, TJP. Perkins’s journey through the tournament was filled with victories over the crowd favorites: Gargano, NXT’s Rich Swann, and then Ibushi. Theirs was a match of smart scouting, brutal counters (I could watch TJP counter the Last Ride into a DDT all day), and so many kicks. Even with complex sequences and maneuvers that made you stop to catch your breath, their tale was (like before) a simple one: TJP knows he’s an underdog, but he has an ace in the hole that no one has beaten, and that’s his kneebar submission. So the fight becomes about TJP wearing down Ibushi’s knee in search of his victory, while Ibushi tries to hit every bomb he has to put away the scrappy Angelino before that can happen. Alas, it would be Perkins that would lock in a third kneebar and modify it into a gory facelock-kneebar combo for the win. Simply astounding. That TJP would ride that victory to a win in the final shouldn’t have been in doubt; his single night performance on the last day is going to set the standard for the Cruiserweights going forward. When speaking the next morning, recovering from some gnarly chest bruises, Perkins was still in awe: “It’s surreal, I kind of didn’t want to go to sleep last night because I was afraid I would wake up, and it was all a dream. When I got up to go to the bathroom or something, I would check to see if the title was still sitting on the edge of the bed.”

So what can expect from these talented-if-undersized competitors come Monday? Well, it’s a mixed bag. “As far as Monday goes, I try not to have any expectations,” said Perkins. “It’s how I looked at all of this. I was prepared to be going home after round one, if that’s how it was gonna go. I’m just gonna enjoy it and see where the wind takes me and see what bridge I’m crossing.” TJP’s approach might be the safe one: expectations should be muted, because they will have to navigate within the confines of both live TV (every CWC show was taped aside from the final, and can be watched on-demand on the WWE Network) and the machinations of Raw and WWE main roster television. Let’s just say that it’s doubtful that the Cruiserweights will get two 20-minute classic matches a week.

However, the talent is there, and with enough time and preparation, it’s possible that the division begins to look something like the NXT women’s division of 2014 and 2015: a highlight of the lower card that consistently steals the show from the more heralded main eventers. These guys can all go in the ring, and if given enough time and respect, there’s no reason that Perkins, Alexander, Gargano, and even Neville (who really should have been the first champion, if we’re picking nits; the belt is even in his color scheme!) can’t steal the show week in and week out. Even (or especially) if WWE takes the WCW approach of “go out there and do whatever you want for 15 minutes.” Given the roads they all traveled to make it to the peak of the sport, they not going to go away without a fight. “I’ve done stuff in the past and followed in the footsteps of my heroes, and each time it felt a little bit surreal,” said Perkins. “This is so big in magnitude in comparison that it is really hard to almost accept, but I’m overjoyed for it. It’s beyond words, what it means to me.” Despite what Hulk Hogan once said, these Cruiserweights aren’t going to cruiser wait, brother.