The San Francisco 49ers have now been declared dead in the water, but for three quarters in Seattle on Sunday, they were very much alive. Their defense had kept the game close – they trailed 10-7 going into the fourth – but the Seahawks had the ball and were driving. The only person standing between the Niners and playoff elimination was quarterback Russell Wilson.

And that would prove to be a problem. Because Wilson was prepared for this.

Ninety seconds into the fourth quarter, Wilson beat the Niners’ blitz and hit rookie Paul Richardson on a slant for a 10-yard touchdown pass, putting his team up 17-7 and effectively ending the 49ers’ season. If it looked premeditated, it was: Using the team’s Surface tablet on the sideline, Wilson had examined an earlier foray in San Francisco’s red zone and he didn’t just think Richardson would be open, he knew it.

The Battle of Seattle: Is the Seahawks/49ers Rivalry Over?

“I was looking like, ‘I gotta see what they’re doing in the red zone,’ and just kind of studying that,” Wilson says. “I was able to see what the safety and linebacker were doing and sure enough, I kind of looked one way, came back to the other side and hit Richardson for his first NFL touchdown.

Which is a simpler way of saying that Wilson has been preparing for moments like that one his entire life, willing to out-work and out-study the competition, mostly out of necessity. Standing 5’11”, it’s been said that he was too short to start in the NFL (he is), and if he did, he couldn’t play all that well (he made the Pro Bowl in each of his first two seasons), and definitely couldn’t win a Super Bowl (the Seahawks beat Denver 43-8 in Super Bowl XLVIII, making Wilson the shortest starting QB to ever raise the Lombardi Trophy).

In essence, he’s proven his detractors wrong at every step, and he’s not about to slow down long enough for them to catch up. Though, these days, he doesn’t allow himself much time to slow down for anything.

“Relax? I don’t know if there’s any relaxation time,” he laughs. “That’s really what the office is for me. I’m very official in my day. I don’t waste my time.”

When Wilson refers to “the office,” he’s talking about the Virginia Mason Athletic Center, Seattle’s training facility in Renton, Washington. Most days, Wilson is there before 6 a.m., watching game film and working out, and he won’t leave until late at night. Hours after beating the 49ers, Wilson was already back at the VMAC, preparing himself for Sunday’s game against the Arizona Cardinals, which will determine the leader in the NFC West.

“I was there that same night,” Wilson says. “You just are able to look back at that game, study the game we just played, take notes on it.”

And Wilson takes a lot of notes. 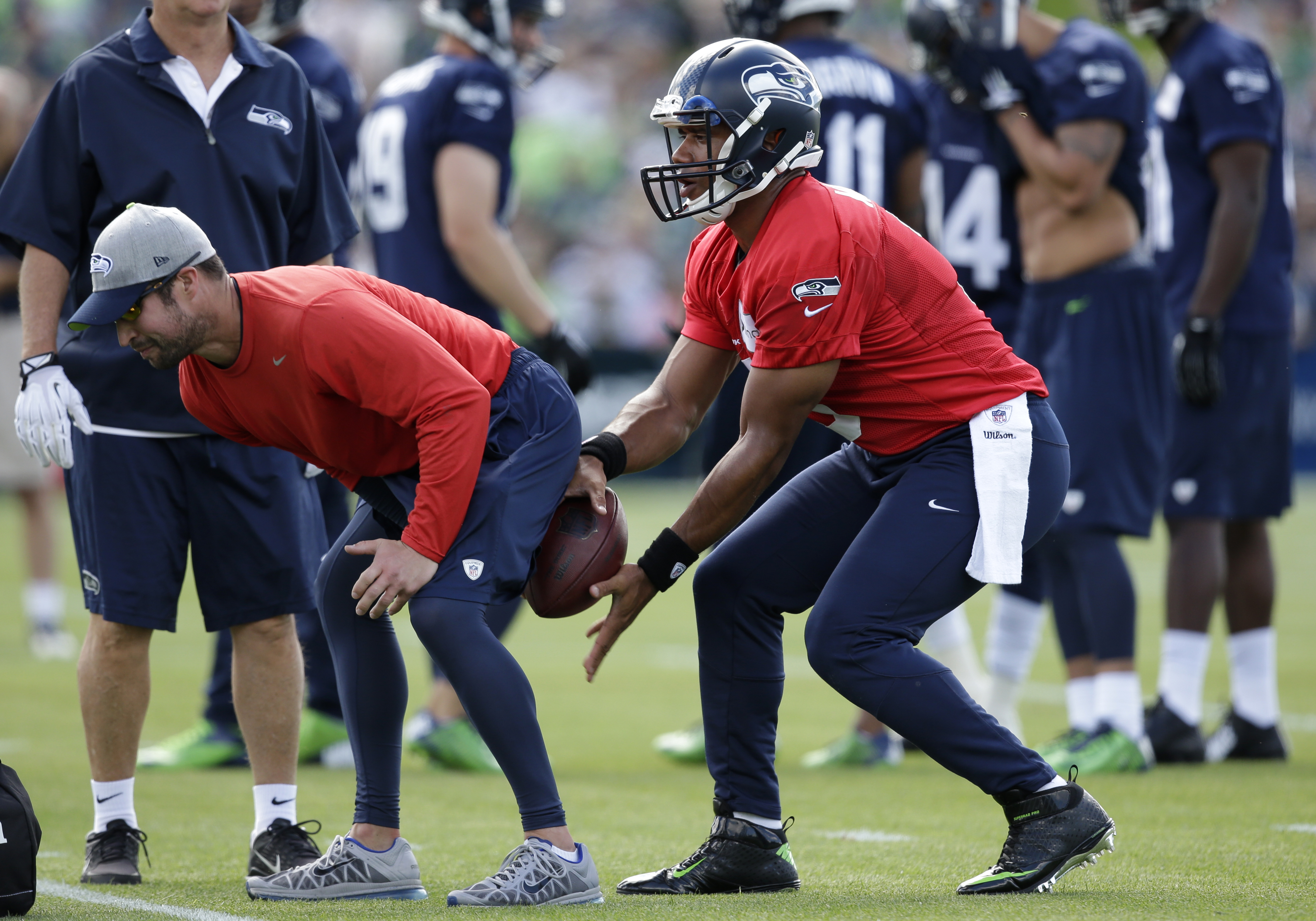 “I type up a bunch of notes for all of our receivers, tight ends and running backs, and I send it all to them through email or print them out,” he says. “That’s a huge thing for us coming up on the next week. Like, this week we play the Cardinals; I’ll give them a whole scouting report essentially. What they’ve done as of late, who’s playing, all that kind of stuff.”

Mondays are spent watching game film as a team and working out. Tuesday mornings Wilson crams as much prep as possible into a few short hours, because Tuesday afternoons are when he allows himself a single luxury: Visiting Seattle Children’s Hospital. It’s something he began doing at area hospitals when he played college ball at NC State, and kept the tradition alive when he transferred to Wisconsin.

“I used to go to put a smile on a kid’s face, but the real reason that I go now is that I’m praying for a miracle. Praying that something happens. That’s what I’m rooting for when I walk into that room,” he says. “It makes my week and puts a lot of things into perspective; I have a great opportunity to influence and to play the game of football.

“To be honest, I’m probably kind of annoying to them now,” he continues, a smile spreading across his face. “The first day I got here, I called Seattle Children’s and I don’t think they believed I’d go every Tuesday.”

And yet, he does. Even though, since winning the Super Bowl in February, Wilson’s become a legitimate celebrity, appearing on Late Show with David Letterman, sitting courtside with Jay Z and Beyoncé, making a cameo in the upcoming Entourage movie and meeting Barack Obama (“That’s confidential,” he laughs when I ask him what advice the president gave him). The visits are the one distraction he permits during the season – and once they’re finished, he turns his attention back to the task at hand.

This week, it’s beating the Cardinals. Wednesday through Friday he practices with the team, fits in more workouts and watches more film. There’s little time for rest – Wilson gets by on five-or-six hours per night.

“I train my body not to get much sleep; that way I can still be kind of aware during the week. I’m not suggesting people do it,” he says. “And come game day, I’m just amped up. My body is more awake and aware and my instincts are really alive, so I think it helps me.”

At this point, why mess with the formula for success? On Sunday, the Seahawks face another challenge in their quest to repeat as champs. Arizona is 11-3, atop the NFC West and currently blocking Seattle’s path to home-field advantage in the playoffs. Not surprisingly, Wilson is unfazed by any of this – days of film sessions, workouts and practices will have him ready. The lack of sleep will have him dialed in. The volunteering will put his mind at ease. It’s all part of a chaotic (yet carefully constructed) routine…and the reason he doesn’t just think he’ll be prepared, he knows it.