After an excruciatingly dull Game 1 blowout that seemed to almost willfully puncture the wide expectations of a taut and exciting World Series, there appears to be some life left in this Fall Classic yet.

On Tuesday night, Madison Bumgarner and the San Francisco Giants prevented the Kansas City Royals from extending their record-setting winning streak for a single postseason, and did so in the most emphatic way possible, scoring three times in the top of the first off Royals starter James Shields – whose “Big Game James” nickname has taken on an increasingly sarcastic ring this postseason – and let their ace lefty do the rest. The Giants crossed the plate two more times in the fourth inning and twice more in the seventh, apparently to show the Royals and their stunned fans that they could score practically at will; the way “MadBum” was pitching, the extra tallies certainly weren’t required.

It took a Salvador Perez solo homer in the bottom of the seventh to bring the capacity crowd at Kauffman Stadium back to life, and to halt Bumgarner’s World Series scoreless streak at 21 innings (the seventh longest in WS history); but by then, the outcome of Game One had already long been decided.

“Act like you’ve been there before” is an admonition popular these days with the “play the game right” brigade and other assorted killjoys, but there’s no denying that the Giants looked like they had indeed been there before. They exuded the same confidence and aggression they’d exhibited while sweeping the Detroit Tigers in the 2012 World Series, while the Royals – who hadn’t lost a game since September – now looked utterly helpless and out of their depth, their “blue magic” apparently dissipated by a five-day layoff.

Royals manager Ned Yost made a lot of boneheaded moves during the regular season, but perhaps his worst came in August, when he criticized the long-suffering Kansas City fans for their lack of support. Yost’s foot-in-mouth moment seemed especially ironic during Game 1, when some forty thousand blue-clad Royals supporters showed up at Kauffman Stadium pumped for the first World Series game in Kansas City since A-ha’s “Take On Me” was climbing the pop charts, only to find their beloved team M.I.A. Surely they deserved a better show than this, especially at whatever ridiculous sums the tickets were changing hands for.

Of course, Bumgarner – the MVP of the 2014 NLCS – has blown away tougher lineups than the Royals’ this postseason; unfortunately for the Giants, they can’t start him in every game of the Series. Jake Peavy, the Giants’ Game 2 starter, came into the contest with a lifetime 5-7 record and 4.97 ERA against Kansas City, which tagged him for six runs and ten hits (including two home runs) when they last crossed paths in August 2013. If the Royals were to get back on track and reclaim their mojo, this was the clearly the guy to do it off of.

And do it they did on Wednesday, though Giants Gregor Blanco briefly sent a shiver of despair through “The K” when he sent a 98 MPH Yordano Ventura fastball over the right field fence for a leadoff home run in the top of the first. The Royals tied it up in the bottom of the frame with a two-out RBI single from Billy Butler, though “Country Breakfast” might have had more on his plate if leadoff man Alcides Escobar hadn’t been caught trying to steal second. Escobar made up for his gaffe in the bottom of the second, giving Kansas City a 2-1 lead (and igniting the hometown crowd) with a two-out double that scored Omar Infante.

The much-hyped Kansas City defense looked relatively mortal in the top of the fourth, when Lorenzo Cain failed to execute a Willie Mays on Pablo Sandoval’s long drive to deep center, and first baseman Eric Hosmer just missed laying his glove on a Brandon Belt double to right that sent the “Kung-Fu Panda” waddling home to tie the score 2-2 with one out. Michael Morse, the next batter, flied out to right fielder Nori Aoki; Belt tried to take third when Aoki made a wild throw to the infield, then frantically tried to scramble back when he saw the ball miraculously bounce off the glove of Escobar at short and into the hands of Ventura, who then threw to Infante at second to nail Belt and end the inning. Perhaps the “blue magic” hadn’t entirely dissipated?

Peavy seemed to settle into a solid groove after giving up the Royals’ first two runs of the game, needing just 26 pitches (and some over-eager Royals swings) to get through the third, fourth and fifth innings. His efficiency apparently convinced Giants manager Bruce Bochy to send him out again for the bottom of sixth, the first of several pitching decisions that blew up in Bochy’s face during what turned out to be a five-run inning for the Royals. 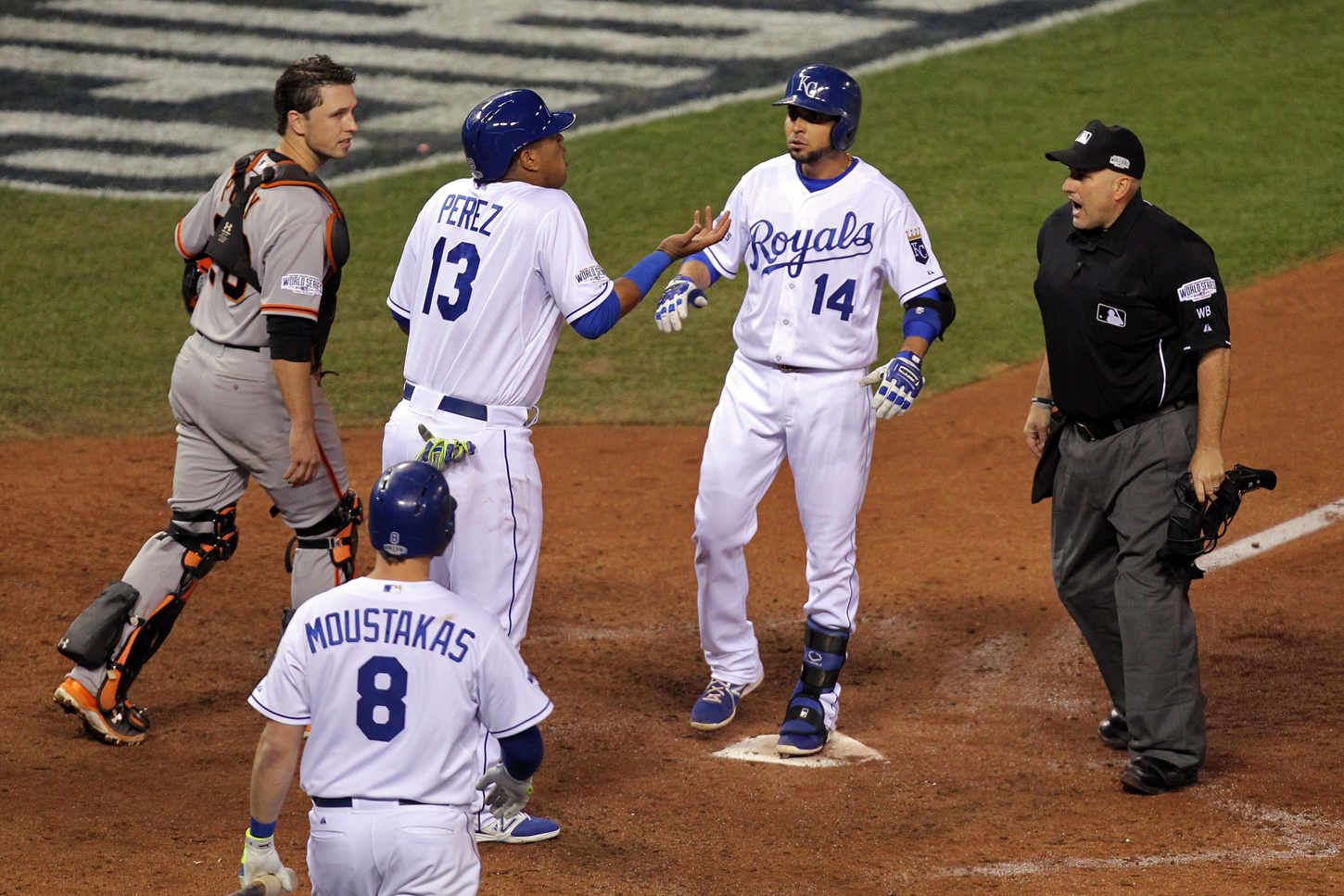 The inning featured five Giants hurlers in all, three of whom failed to record even a single out. The Royals capped their scoring with Infante’s two-run homer off Hunter Strickland; the blow so incensed the reliever that he angrily ordered a visibly confused Salvador Perez to “Get in the dugout, Boy!” before the KC catcher, who’d crossed the plate ahead of Infante, even had a chance to congratulate his teammate. Thankfully, the home plate umpire stepped in before the exchange could escalate further, though both Giants and Royals fans alike would have probably enjoyed seeing Perez beat the crap out of Strickland at that moment.

The Giants had a chance to get back into the game in the top of the seventh, when Kelvin Herrera – who’d come in with one out in the top of the sixth to pitch the Royals out of a jam, but seemed to have tightened up while watching his teammates circle the bases during the bottom of the frame – issued back-to-back walks with one out in the seventh. A Joe Panik single and a Buster Posey big fly would have put San Francisco within a run of Kansas City; but Jarrod Dyson (who’d replaced Aoki in the sixth) made a deft grab of Panik’s liner, and Herrera induced Posey to ground out to second to end the inning. Wade Davis and Greg Holland nailed the door shut in the eighth and ninth, fanning five of the seven Giants they faced, and the Series that looked like a washout just the day earlier was suddenly tied.

Though it had no impact on the game’s outcome, the best Giants pitching performance of the night came from Tim Lincecum, who made his first appearance of the postseason in the bottom of the seventh. “The Freak” – who’d missed the pregame introductions on Tuesday night because he was puking his guts out – looked the very picture of composure, setting down the first five Royals he faced before having to leave the game with two outs in the eighth, after slipping on the mound while pitching to Perez.

The Giants are calling Lincecum’s injury a “lower back strain,” though it remains to be seen if it’s something more serious. If it isn’t, Bochy might want to consider making greater use of his former Cy Young winner, who looked sharper out there than anyone else who took the mound for him on Wednesday. For while the Giants have the home-field advantage, what with the Series heading to San Francisco for three games, their Game 3 and 4 starters Tim Hudson and Ryan Vogelsong both looked pretty shaky against the Cardinals in the NLCS, and the Royals, who went 47-34 on the road in 2014 with a plus-69 run differential, are much more difficult to contain than Bumgarner made it seem on Wednesday night.

In any case, this World Series is far from over – it just might live up to its initial billing after all.