Eric Hosmer was a highly touted prospect from the moment he picked up a bat, and when the Kansas City Royals drafted him straight out of high school in 2008, expectations were off the charts.

In short, he was part of a core group of young talent that was tasked with resurrecting a franchise that had fallen on hard times (to put it mildly): The Royals hadn’t made the MLB postseason since winning the World Series in 1985 and had managed just one winning season in the decade before he was drafted. By 2011, much of that core had made their way to the majors, including Hosmer, who batted .293 and hit 19 home runs in his debut season – good enough for a third-place finish in A.L. Rookie of the Year voting. It seemed those expectations were well-founded. But the Royals, flush with fresh-faced players, still finished 20 games under .500, then followed that up with a 72-90 record in 2012.

Still, something was stirring in Kansas City. In 2013, the Royals won 86 games (their most since 1989), then broke out big time in 2014, embarking on an improbable run that brought them all the way back to the World Series, where they lost in excruciating fashion – in Game 7, with the tying run standing on third base – to the San Francisco Giants. Baseball doesn’t often afford teams second chances, but Hosmer and the Royals were ready to buck the trend, determined to not only make it back to the Fall Classic, but bring Kansas City its first World Championship in 30 years.

By now, you’re probably aware that they pulled it off – taking control of the A.L. Central in early June and never relinquishing the lead, mounting a furious comeback against the Houston Astros in the Division Series, taming the Toronto Blue Jays’ high-powered offense in the Championship Series and then willing their way past the New York Mets to win the World Series in five games.

For Hosmer, the championship was more than just the culmination of a seven-year trip to the top of the baseball world – it was validation of a team-wide belief that these Royals were building something special, and confirmation that the critics had it wrong all along. Don’t believe us? Just ask him:

It’s almost been two weeks since the Royals won the World Series. Has any of it sunk in yet?
It’s all still surreal; we’d watch Kimmel and see [Mike] Moustakas and all those guys on there. We got flown up to New York on a private jet that Jimmy Fallon sent – they were saying it was the first time he’d ever sent it for an athlete. It’s crazy, because you win, you see your family on the field, you’re doing all these interviews with these people you’ve grown up watching on TV, you see the trophy and before you know it, you’re looking at Jimmy Fallon, having a conversation with him. It’s unbelievable. And then actors like Paul Rudd and Rob Riggle, those were guys who would make it out once a summer for the big charity event, and now we’re texting and sending Twitter messages back and forth. It’s crazy, because it’s all happened so fast. 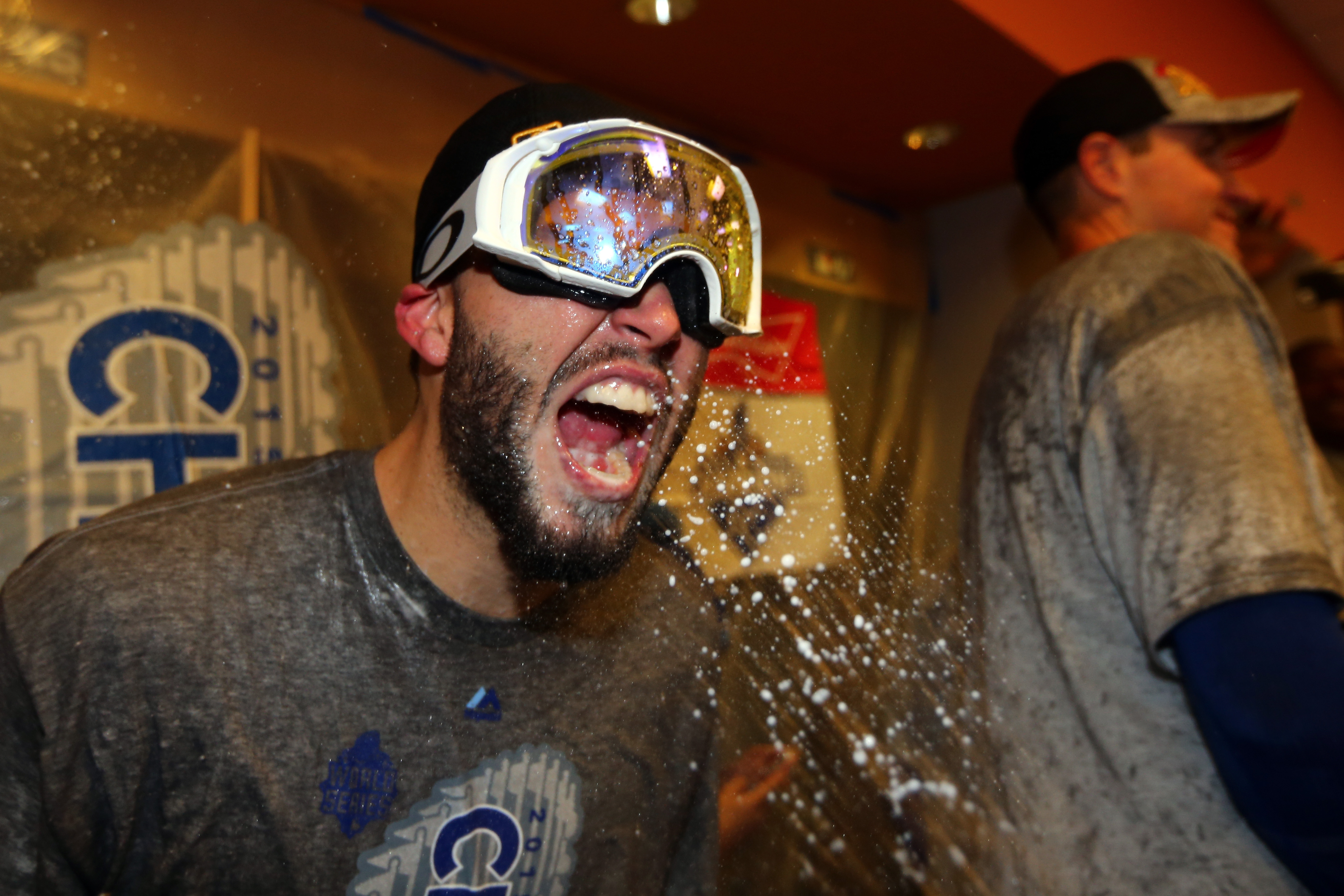 It was pretty cool to see Paul Rudd celebrating with you guys in the clubhouse.
Yeah. I mean, if you see Paul Rudd out somewhere, you’re not going to take four beers and pour them over his head. I definitely felt comfortable enough to do that; we’ve reached that level of friendship [laughs]. It was such a fun time, and the fact that he’s been so nice to us, and so cool to us, it felt like he belonged there. That’s the funny thing; we do a team celebration at the end of every game, and Riggle and Eric Stonestreet have each snuck into the clubhouse to be a part of it.

We had all the lights off, had the strobe light and smoke machine going and AC/DC’s “Thunderstruck” blasting. It’s the same celebration all year – we all clap at the same time, then one of the vets on the team, Jeremy Guthrie, would announce all the different players who had a big impact on the game, and when he’d finally announce the player of the game, he’d always go, ‘”Listen up, I got something to say…” But this time, it was like, “Listen up, Paul Rudd’s got something to say…” and Rudd would pop out, or Rob Riggle. It was awesome.

If you look at this team, many of the core guys came up through the Royals’ system together, debuted in the majors together and helped turn this franchise around together. So it must have been incredibly special to win the World Series together –
Definitely. The first couple of years in the bigs, people doubted us, but we’ve known the whole time that this group of guys is talented enough to get to the postseason and win the World Series. So we took it upon ourselves to learn and get better, and it’s so cool now that we’ve proven it to everybody.

And then you add the way we felt after losing the World Series to the Giants last year. No disrespect to them, but we felt like we were a better team, we just got beat by a guy who put up a superior performance – Madison Bumgarner. And when you get to the top of the mountain and you fall, and then next year people are saying you’re going to finish third in your division and win 72 games, well, it makes you determined to prove everybody wrong. And that desire helped carry this team through the grind of the season. You’d be going bad for 3-4 games, and you’d be getting frustrated, but you knew you had to flush that away and get back to work. 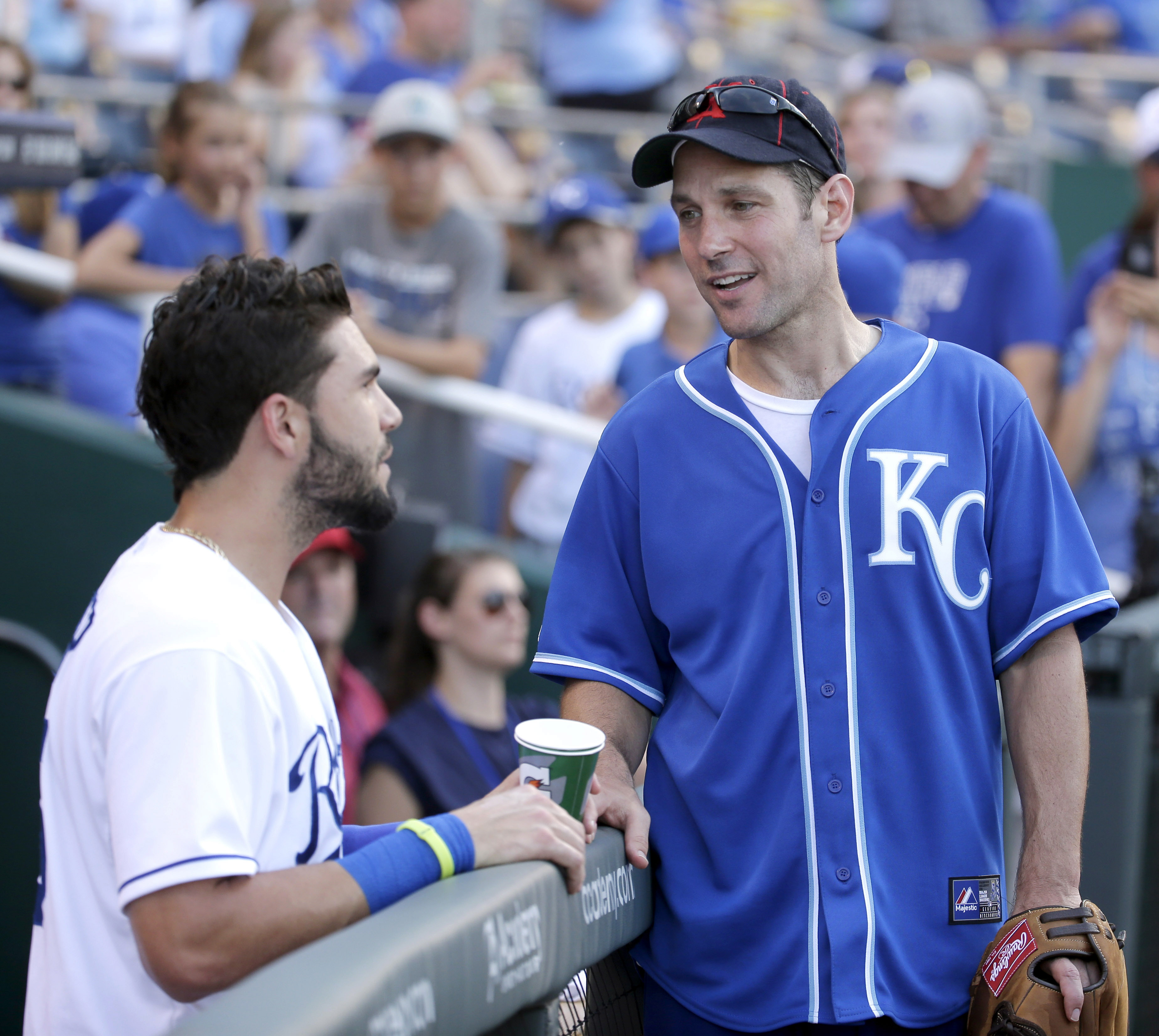 In Game 5 of this year’s Series, Matt Harvey had held you guys in check for the first eight innings, but it seemed like the Mets were going to hand the game over to Jeurys Familia in the ninth. Were you surprised when Harvey came back out to pitch?
No, because I know Matt. I was roommates with him in high school summer baseball, and I knew if he wasn’t going to be in that inning, the conversation with his manager wasn’t going to be pretty. As a team, we have no fear, we knew going into the ninth he had been beating us with his power stuff, and he wasn’t going to change that. We knew that we probably weren’t going to be able to string 4 or 5 hits together, so we had to make the most of our opportunities. We had to get guys on, get guys in motion, get things going. And that’s what happened.

And then you got to celebrate with a victory parade in Kansas City. What was it like to be in the middle of all that?
Honestly, it all kind of played out like a movie; when we got closer to the big leagues, all you heard in the Midwest was, “Kansas City is such a baseball town, if you guys can win there, you’ll see. It’ll be just like St. Louis.” And we start having some success, playing in back-to-back Series and you saw it happening. So during that parade, I was thinking back to every person who ever told me how great the fans were in Kansas City and realizing how true it really was. We’re talking 800,000 people at the parade, people leaving their cars on the side of the road. Madness. The people in Kansas City, they go crazy. Every street corner you turned, you’d see a flood of people, then you’d look past a building and see even more. It was, like, wave after wave of people. And then, up on the stage, you could probably go back, like, five football fields, and it was all people in Royal blue.

And of course, there was Jonny Gomes’ speech –
First of all, what made that speech so epic is that none of us knew we were going to speak, so they randomly called Gomes out and it was off the top of his head. It was hilarious and the presentation was unreal. But, you know, he made us realize how special the moment was; he’s taught us to enjoy all of it, because you’re talking about a guy who’s been through some close calls in life, so when he tells us we can’t take anything for granted, we listen. That’s just one of the things I learned from Gomes. He didn’t get one at-bat in the postseason, but the little stuff he did in the dugout meant so much. And, man, when he grabbed that flag, it was awesome. [Laughs] He’s all about America.

And I have to ask you about your haircut – how does it feel to be a style icon now?
[Laughs] I have to give credit to DeJuan Bonds, the Royals’ team barber. If it were up to me, he’d get a World Series ring for sure. That’s what’s so unique about what we do; from Spring Training to the World Series, it’s like 8 or 9 months that you’re spending with these guys from Japan and Venezuela and Miami and Nebraska, and stuff like getting haircuts helps unite us all. When we were all rookies in 2011, they made all of us get Mohawks, and I kept on with it, and through out the years I’d ask DeJuan, “Hey, maybe do something different on the sides?” And he’d come back with a couple ideas, something new, and it slowly became this Mohawk-fade thing, and then people started calling it “The Hos.” Honestly, the coolest thing to me is seeing little kids walking around with “The Hos.” I never thought that would happen.