No WWE superstar’s been thrown to the wolves quite like Eva Marie.

The California-bred fitness model and wrestling neophyte was signed in 2013, and by that summer was thrust onto audiences as both a centerpiece of Total Divas and in-ring competitor on Raw. Fans summarily rejected the imposition and, in turn, Eva’s predetermined anointment as the future face of her division. Unfortunately, her innate sex appeal and presentation as flame-haired queen biatch couldn’t cover for her lack of polish. By early 2015 – and after combating injury – she willingly stepped out of the spotlight to train with former WWE tag champ Brian Kendrick, and has since resurrected herself as a legit lady heel in NXT, warring with Women’s Champion Bayley and seemingly priming herself for a return to the main roster.

One day following her near-win in a No. 1 Contender’s Battle Royal at Full Sail Arena (and with a new season of Total Divas premiering Tuesday on E!), we asked the divisive Diva about whether we’ll be seeing her at Fastlane, tuning out those “Eva can’t wrestle” chants and why Asuka is what’s best for business.

Where does Eva Marie fit into the Divas landscape, which is markedly different than during your last main-roster run?
So much has changed. I’m a pretty big bad guy, so that would definitely transpire on the main roster. I’d be coming in as a major heel. I think they need some heel blood for sure, so hopefully that can happen.

In terms of timing, has it been about waiting until your character generated enough heat in NXT before being called up?
Yeah, the fact that I’m able to be on the road and be performing in front of crowds and building my heel character, as well as on NXT TV, is huge, because you take what we’re doing there and put it up on the main roster. So far, so good.

Was part of the plan to have this Total Divas season introduce the work you’ve been doing in NXT to a wider audience before returning to the main roster?
Yes, exactly. I was not the most liked cast member last season, so this season you’re gonna see how and why I chose to go to NXT and the reasoning behind going to hone my craft and build my character as well. I think that’s great for not only the E! network, but our WWE universe to see, because you get to see the difference between myself and people like Natalya or Paige, who were born into wrestling. I think it’s good for people to see the difference between the two and how much work it does take to become a WWE Diva. 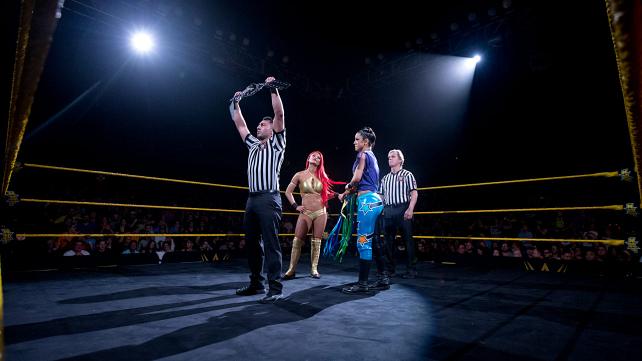 How do you win over fans that are still skeptical about your commitment to wrestling as opposed to the overall Eva Marie brand?
People are always going to have something to say, where it’s good, bad or indifferent. And for me, I know exactly why I became a WWE Diva. I think people forget I tried out to be a Diva before I got Total Divas. So I was given this amazing opportunity that, if presented to anybody, they would take. As far as my commitment to being a wrestler, the proof is in the pudding. I asked to go back to NXT when I really didn’t have to. I was already on the main roster, so I could have continued doing what I was doing up there. I never want to do anything mediocre, so I needed to make that personal assessment and ask Vince McMahon and Triple H, “Can I go to NXT?” Because we have the resources, so why wouldn’t I want to capitalize on that? I’ve put in blood, sweat and tears to progress, which is awesome, ’cause look at me now: I’m working a live event tonight. It was definitely one of the scariest – but best – decisions I’ve ever made.

Was there ever talk of completely overhauling your character rather than just changing her attitude?
A little bit, but then it was one of those things where I already had a little of this character created, and I just needed to bring it from a two and put it on a 20. You can see my progression from my first match back to my title match with Bayley and really embracing my heel character and coming into my own and enjoying the bad-guy persona.

Was the biggest obstacle not appearing rattled when fans antagonize you or chant, “Eva can’t wrestle“?
A hundred-and-ten percent. The Eva Marie two years ago? Sure, mentally, it would get to me, but that was before I had the skillset I do now. For me, it’s all about being the character, so those boos and the craziness are super-inviting – I want it and I want them to continue bringing it. If they were quiet, I’m not doing too much. It’s awesome for storytelling, and at the end of the day, that’s what WWE’s all about: telling a great story within the match.

And with the influx of talent brought in – or rumored to be coming – from other promotions around the world, does that put the NXT locker room on edge, or are you guys enthusiastic about it?
I think each individual feels differently about what talent’s getting brought in. For me personally, the more the merrier. Each person is an individual, and as long as you’re comfortable with your character and what you bring to the table, that’s all that matters, because there is enough room for all of us. For instance, them bringing in Asuka – it’s such a great thing for not only NXT but the WWE brand, because you’re able to pull in different audiences from all around the world. At the end of the day, that helps you with your performance and your character, because you’ll be able to step in the ring with someone like her or someone from a different organization. All around, it’s a win-win and beneficial.