In 2015, Lucha Underground became the best-kept secret in pro wrestling.

Part upstart promotion, part pulpy TV drama, the show – which airs on the El Rey Network – paired some of the best luchadors from Mexico with top indie talent from the U.S., spun stories that involved a mysterious millionaire owner, powerful Aztec medallions and undead warriors and presented it all in a stylized, big-screen format. The result was a wrestling program unlike any other: brash, bold and very often brutal.

There was no shortage of breakout stars during Lucha Underground‘s first season, though perhaps none resonated quite like Pentagón Jr., a luchador who had wrestled almost exclusively for the AAA organization in Mexico. His stark, striking look and aggressive style – best summed up by his mantra, “Cero Miedo,” which translates to “zero fear” – quickly caught on with American audiences, even as he was going after some of the biggest babyfaces in the company. As a result, he was given a plum storyline, in which he sacrificed other wrestlers (by breaking their arms) for a mysterious master. When he went too far, Pentagón drew the ire of semi-retired icon Vampiro, and the two eventually faced off in a vicious deathmatch-style bout that featured buckets of blood, broken glass and a burning table.

If you haven’t caught up on the first season, we won’t spoil what happened at the conclusion of their brutal match, though it’s safe to say it turned the entire LU world upside down. And thankfully, we’ll get to find out what happens next, because after months of doubt, El Rey announced it was renewing Lucha Underground for a second season, which premieres Wednesday at 8 p.m. ET on the network.

And before it begins, Rolling Stone spoke to Pentagón Jr. – with the assistance of a translator – about his rise through the Lucha Underground ranks, his long history of violence and how “Cero Miedo” is more than just a slogan, it’s a lifestyle.

What did you think when you first heard about Lucha Underground?
I had no idea what to expect. Going off the name, I expected something gritty, but I had no idea what it was about or what it would become. I was very surprised when I first arrived and started working with them. I was surprised about the level of the lucha that was presented every time someone steps in the ring. I didn’t realize exactly how good the work would be each and every time.

Your ‘Cero Miedo’ match with Vampiro was one that everyone talked about for months. Have you had a match with that level of violence before?
It wasn’t the first time that I had a match that violent, but I consider it the most important lucha of my career to date. I have fought luchas back in Mexico that have been equally violent, but not with people of the caliber and acclaim as Vampiro. I was extremely excited to work with someone who is a legend in the wrestling community – not just in Mexico, but on a global scale. For me, it was a great honor to step into the same ring as him, and just to work side-by-side with him. Given that it also was part of Ultima Lucha, it made everything so much bigger.

What makes Lucha Underground different from other wrestling promotions?
Every part of it makes it special. Every aspect of the show comes together to form this fantastic world. Everything from the staging to the luchadors to the staff both in front and behind the camera. Even the medics and the office workers, it all feels like a big family there. Add in the amazing fans that come to watch the matches, it makes for a perfect combination. You can feel the cohesion between all these elements.

You said that everything forms a “fantastic world.” Obviously the world of Lucha Underground is very unusual, and incorporates fantasy and mythological elements. How different is it to work in a world like that?
It’s been very, very different. But I love it. There’s more than just the wrestling to every character. Every luchador in Lucha Underground has a strong motive, and there’s a story behind them. That fuels them when they step into the ring. They fight with an intensity and with a purpose. The fact that the public can follow all the storylines, they enjoy it more. They know there’s a purpose behind it. They’re not just fighting for the sake of fighting. There’s something actually fueling the conflict. It’s something that’s very specific to Lucha Underground – you don’t get the same caliber of stories in other companies. However, the matches are important as well.

OK, so here’s a SPOILER: In season one, your story arc revolved around making sacrifices to your mysterious master. Now that the master has been revealed as Vampiro, what can we expect in season two?
Looking back at season one, even I was surprised that Vampiro was the master. Every time we were working on the story, I knew there was a master, but I had no idea who it was. I found out very late in season one. That really fueled me, and made me want to get better, because of who I was going to be working with. For season two, you can expect us to come back with even more force. It will be better and greater. I don’t know much yet about what’s going to happen, but I know the fans are going to very excited, and very pleased. 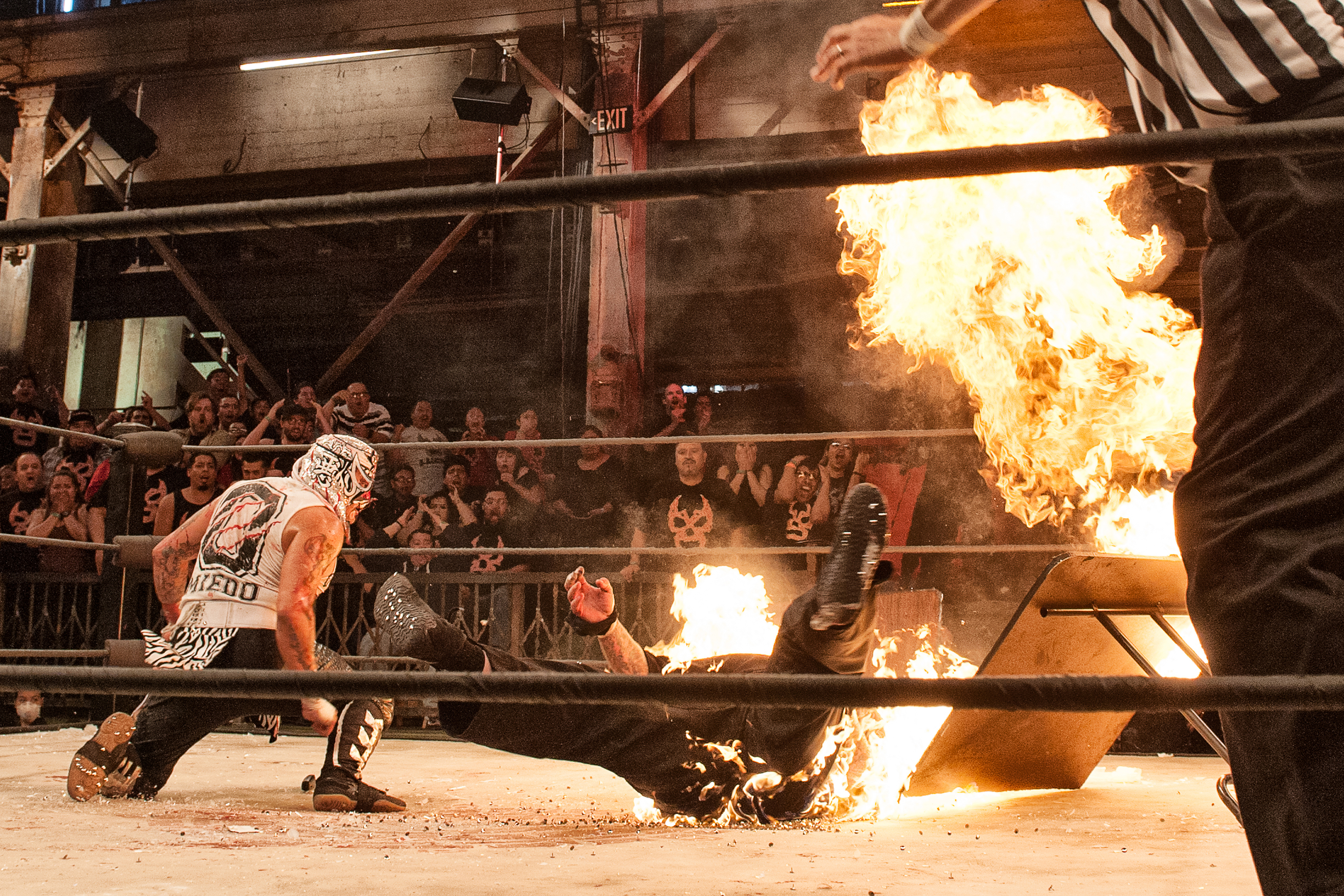 How did the Pentagón Jr. persona come about?
Years ago, Pentagón was a wrestler in the AAA organization. Then when he left, Pentagon stopped existing. When I started with AAA, they offered me the name Pentagón, to pick it up. I accepted, but with the caveat that I could make changes, and make it my own. I started with painting my face, and making tweaks that made it more myself. I wanted to design my own mask, and make the contact [lenses]. Then I created my slogan, Cero Miedo [Zero Fear], which is totally mine. That’s become more than a slogan, it’s a way of life that people adhere to and love, and associate solely to me.

The Cero Miedo catchphrase has become popular with crowds both here in the U.S. and in Mexico. Why did you choose that phrase, and did you expect it to catch on the way that it did?
I was looking for something that would stick with people and would drive the mentality behind why I want to fight. I wanted something simple, and would demonstrate that I was just aggressive and willing to face anyone in the ring. The first time that it came up, I didn’t know if anyone was going to take to it or not. I was pleasantly surprised that people liked it. Now it’s become something that people completely associate with me, and love about me. It’s grown far beyond anything I could have expected.

Have you noticed your popularity rising since Lucha Underground debuted? I know you recently had a match with Chris Hero in Chicago, which was your first in the U.S. outside of California…
I had a great experience. Chris Hero is a legend of the independent circuit. I had a really positive experience. The reaction from the crowd was fantastic. They even chanted, “Pentagon come back.” I love what I do, so anywhere I can showcase that, I will go and do what I know how to do best. I feel like my recognition has grown. That’s because people like my work, especially what I’m doing in the ring. I’ve worked extremely hard for years for that, but Lucha Underground certainly helped raise my profile.

Could you ever see yourself working a company like WWE?
My first instinct is to say that’s not my decision. I just step into the ring to do my job, and the job that I love so much. However, I do really like the American style of wrestling. I like the reactions from the crowd. I wouldn’t say no to anything in the future. I want to leave all the doors open, but that would be very much down the road. I definitely know that WWE is a world-dominating promotion, and if they came knocking at my door, it would be another decision. But I feel very confident in Lucha Underground and where I am right now.

2015 was such a great year for you. What can we expect from you in 2016?
2015 was a big, big year for me. It was fantastic. I won everything that I could in both AAA and with Lucha Underground. For 2016, I just want to up myself even more. I want to solidify myself as a global star by working very hard and to keep pleasing the fans. I want to solidify the fanbase that has been so good to me.