The journey to CM Punk’s UFC debut has been long and well documented since the organization announced it had signed the former WWE superstar in December 2014. He’ll finally compete Saturday at UFC 203 in Cleveland (10 p.m. ET, pay-per-view), but as is the case in any fight, Punk won’t be going into the Octagon alone.

No, there will be another man looking to prove a point standing across from him. And Mickey Gall, who is 2-0 in his young career and has been training for six years for his moment, is salivating at the thought of building his career off one of the most notable names to ever transition into MMA.

“I think I can do pretty much whatever I want to that guy,” Gall tells Rolling Stone. “I’m bigger and stronger and I’m a better version of everything he can do. I can’t wait to fight him. I can’t wait to put on a display and represent real MMA fighters.”

CM Punk Starts Over: Inside His UFC Reinvention

Gall, 24, has been handed a lottery ticket. All that’s left is to cash it in. From the moment it was revealed Punk had signed a UFC contract for his first professional fight of any kind a target was on his back. Callouts poured in from every angle. Experienced veterans, unknown, and everyone in-between wanted a piece of Punk. Even Jason David Frank, who played the green Power Ranger, campaigned for the contest.

However, it was Gall’s ability to be in the right place at the right time that got him the Welterweight fight. UFC President Dana White brought his “Lookin’ For A Fight” web series, which searches for emerging talent on smaller shows around the globe, to Philadelphia in November for a card that featured Gall’s pro MMA debut.

Gall beat his opponent with a submission in less than three minutes, and with the cameras running and the UFC boss cageside, he made a poignant callout that set everything in motion.

“I got a call about a month before the fight and said Dana White would be at the fight,” Gall says. “Immediately when I got off the phone I’m like, ‘How can I make the most of this? I’ll call out CM Punk. He’s an 0-0 fighter and I’ll be 1-0. That’s a like record, that could happen.’ So I got in there, I choked my guy out in the first round and I got on the microphone and said CM Punk’s name.”

Uncertain what would come of his callout, Gall’s plan came to fruition within weeks. The New Jersey native, who started in the sport at 16 and has trained alongside many current and former UFC fighters, received word he was on his way to the big show less than less than three months after his debut fight. That doesn’t happen to 1-0 fighters, but the UFC needed a realistic opponent for Punk, and Gall was viewed as the guy.

He didn’t get a free pass, though. Gall needed to win a fight to get his desired matchup with Punk, so he was pitted against Mike Jackson at UFC Fight Night 82 in February. The fight took place in Las Vegas, and with Punk sitting by the cage, Gall destroyed Jackson in a mere 45 seconds knocking his opponent down with his first punch and finishing the fight by submission. 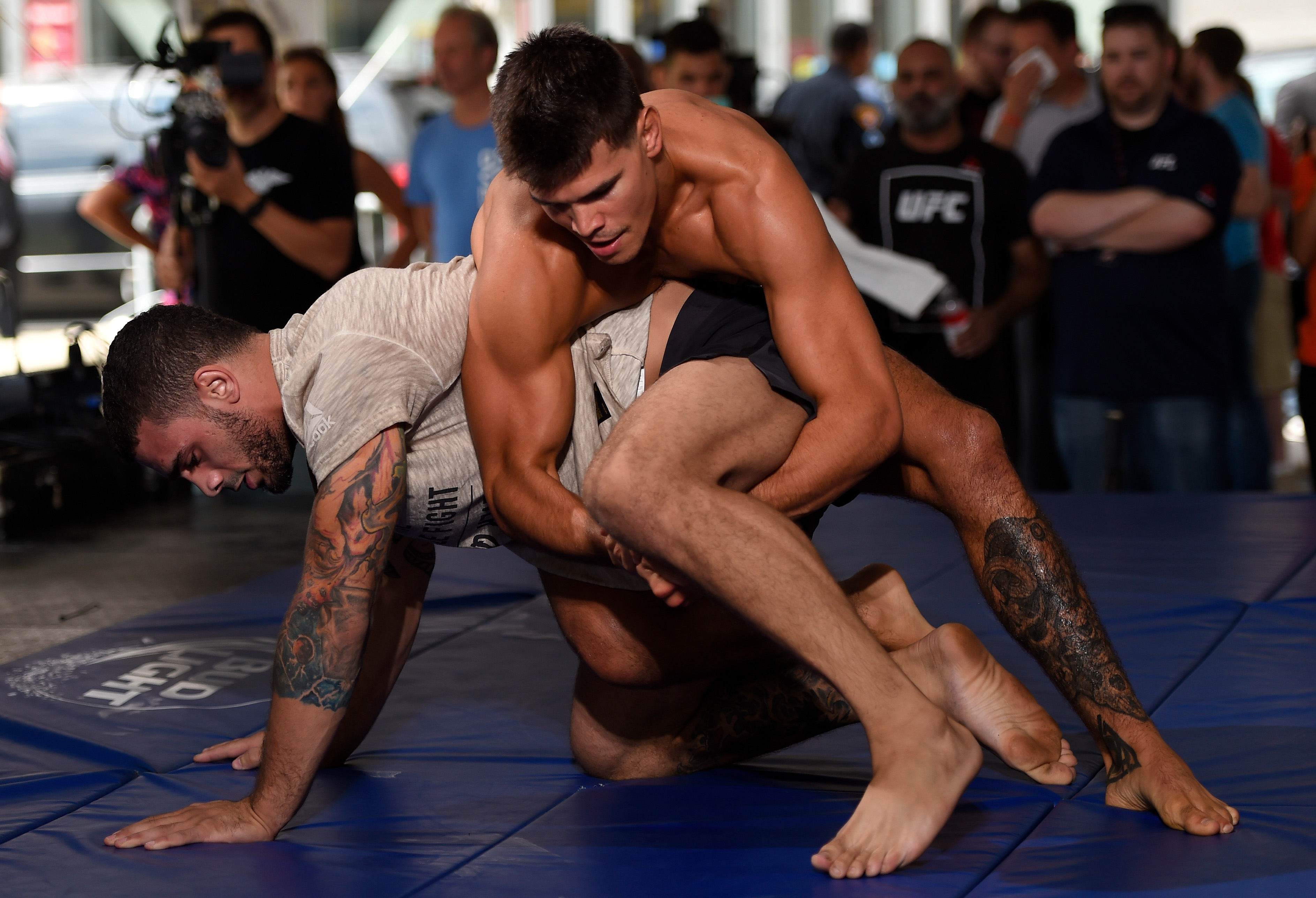 After his victory the UFC brought Punk into the cage for a face-to-face stare down with the man that will welcome him to MMA. Everything was going according to the plan, but the same couldn’t be said on Punk’s side.

For the longtime professional wrestler the transition to MMA wasn’t exactly smooth. Punk joined Roufusport MMA Academy in Milwaukee to build the skills for his first fight, but just minutes before Gall held up his end of the bargain and beat Jackson, Punk was notified an existing back injury would finally require surgery.

Coming back from a herniated disc is difficult for anyone, let alone a 37-year-old with plenty of wear-and-tear on his body. Nevertheless, Gall remained hopeful it would all come together.

“There was a fear it wouldn’t happen and that there would be another setback and injury,” Gall says. “It was a fear in the back of my mind, but I always tried to stay pretty positive about it. I felt like it had to happen. I’m just glad he stayed healthy and trained hard and we’re going to do this fight.”

For Punk, the unknown is his greatest advantage at UFC 203. MMA isn’t a sport to be learnt overnight, and even two years may not be enough to prepare adequately.

Gall might lack experience compared to the average member of the UFC roster, but his two amateur and two pro fights tip the scales in his favor. His brown belt in Brazilian jiu-jitsu towers over Punk’s credentials. Gall is also 13 years younger and doesn’t have years of wrestling matches and injuries attached to his body.

Punk is competing in the UFC because his celebrity allowed an aspiration to turn into a real opportunity. Gall was brought along for the ride, but in reality, he has the raw talent and potential that likely would have landed him in the organization regardless. Gall is aware of that fact, and he intends on showing Punk the difference between a born fighter and someone attempting to fulfill the dream of being one.

“I should have been in the regionals right now,” Gall says. “I should have had to beat five or six more guys locally and then I would go to the UFC. But then the UFC came and that forced me to adapt, and it forced me to train harder, train smarter and get bigger, get stronger and just get better. I think if I fought myself from February I would body that kid. I would beat that dude up. I’m a much better version of myself than I was then. 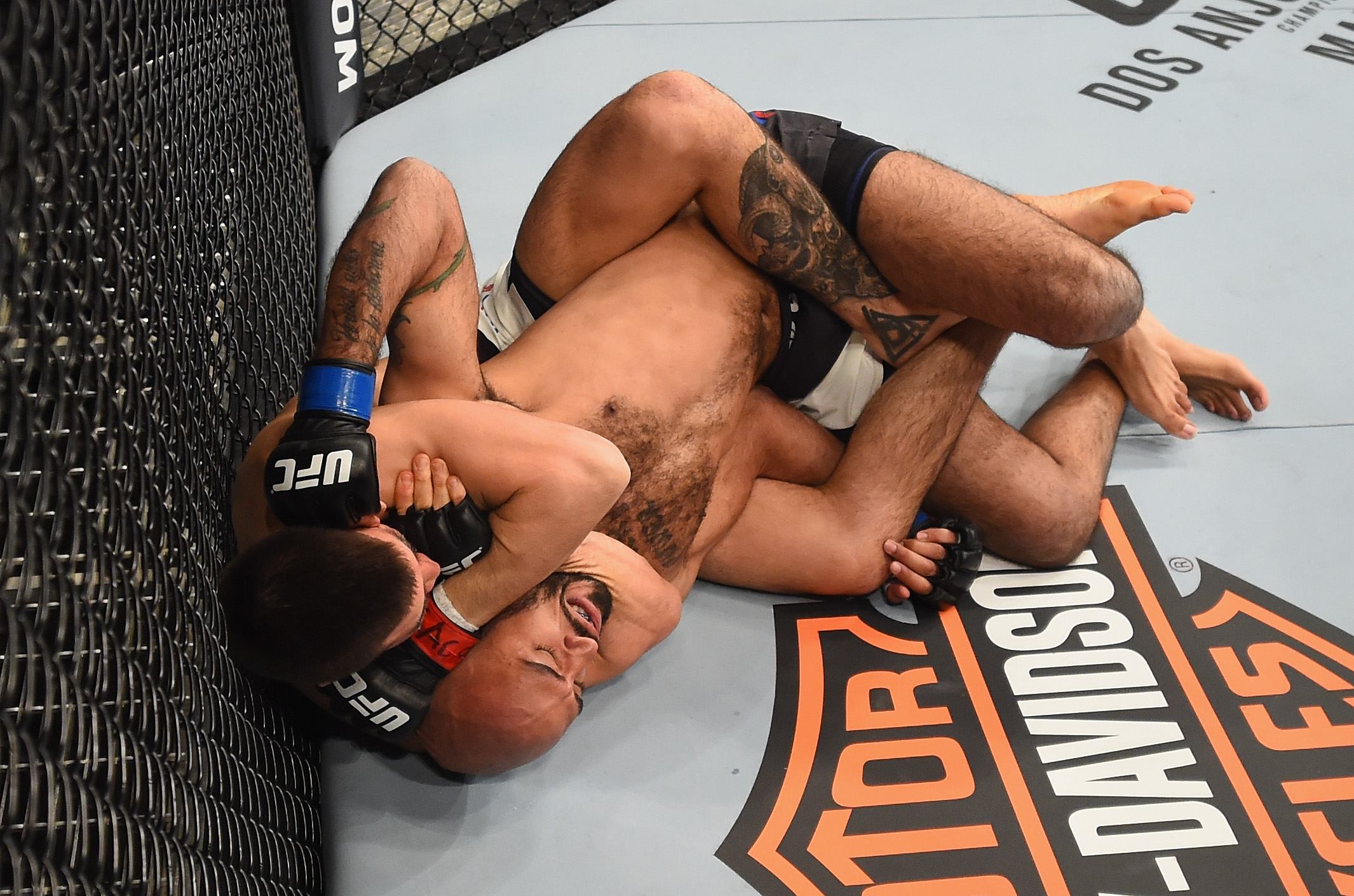 “I’m a true mixed martial artist,” he continued. “I like to get in there and exchange on the feet, I like to thump people in the head pretty hard. If they drop, I’ll jump on them and pound them out or find a submission, or I try to put them out on the feet. But if it goes to the ground that’s probably where I’m strongest.”

The expiration date on Punk’s career is a total mystery. He wants to complete his multi-fight UFC contract, which means win or lose, he’s likely to be back in the Octagon in the future. But for Gall, he already knows what he wants out of the sport. It’s not about a personal journey or proving anything to himself; it’s about maximizing his skills and becoming the best fighter in the world.

UFC 203 isn’t the be all and end all of Gall’s career. In fact, he’s made it quite clear he views this fight as just the beginning. And no matter the outcome, he promised he won’t be defined by a single fight.

“My goal is not to be the CM Punk guy,” Gall says. “My goal is to be UFC champion. After I win this fight I plan to get another fight, a high calibre fight and I’m going to go through that guy too and just keep going through the next guy until I get the belt,” he says of his future plans.

Although Gall seems to have all the tangible advantages going into fight night, he must avoid getting a swelled head. If there’s one thing the sport of MMA has proven time and time again, it’s that the unthinkable routinely occurs. For that reason, Gall knows he must be careful, because while Punk doesn’t have nearly the same amount of combat sports experience, it’s also true that every athlete deserves a certain level of respect.

“There’s no tape so there’s nothing to go on – I think he’s going to be tough,” Gall says. “Those professional wrestlers – although there’s a predetermined outcome – they’re tough dudes. They’re slamming each other around, they’re picking each other up and throwing each other. I assume he’ll be strong and I’ve worked on that. I expect him to be tough and I expect him to be strong. I know he’s not going to be as athletic or as strong or as experienced as me. Or as smart.”

From Gall’s perspective there’s no ill will toward his foe. He simply saw a rare opportunity to build his name, career and bank account. Gall is favored to win by oddsmakers and most fight experts, but no result is ever guaranteed.

Nevertheless, Gall is supremely confident of an emphatic victory that shows his future is filled with high-profile fights and championship belts. Gall wants a performance that meets his standards, and if he does that, he thinks it could be the first and last time the world sees Punk in a UFC fight.

“I definitely think I’ll sour the experience for him,” Gall says. “I plan to make it one-sided, dominant and violent. Maybe after this he can fight the green Power Ranger or whoever else and give him a chance at retribution, but I’m going to do what I do best and I’m going to make him play my game and I’m going to try to devastate him.”