Trash talk – the art of the finely placed “Fuck you” – is part of the fabric of sports, but some words cut deeper than others. Where do players draw the line between snaps that are OK and chirps that go too far?

By now, you know about the war that erupted Sunday between the Giants’ human highlight reel, Odell Beckham Jr., and Carolina’s shutdown cornerback Josh Norman. Beckham was suspended by the NFL for one game after launching himself into the side of Norman’s helmet as their volcanic matchup bubbled over.

The fight started with run-of-the-mill trash talk. But then there have been reports of Norman and some of his Panthers teammates brandishing baseball bats during pregame warmups as a way of getting in Beckham’s head. The gamesmanship – part of every sport, from football to foosball – escalated from there; there was pushing and shoving and jawing after the whistle, all of which culminated in Beckham’s meltdown, the headshot and his eventual suspension.

The seeds for that eruption were laid with trash talk, which seems to have gotten personal. According to reports, Beckham was the target of gay slurs during the game, and has been dealing with those kinds of barbs all season long – “Everybody goes after him,” friend and mentor Michael Irvin said. “He’s a different kind of dude. He has the hairdo out…[t]he ladies love him. He’s a star. I wonder why people are going in that direction”

After 15 weeks of it, Beckham presumably had enough.

“What do you think those two were saying to each other?” former NHL motormouth Sean Avery says. “I’m pretty sure the conversation they were having was a little more interesting than, ‘Fuck you, cocksucker. You’re a dickhead.’ I think there was a little more gamesmanship in the dialogue they were using.”

Avery would know. For 11 years, he reigned supreme as the NHL’s most notorious agitator, which means that when he played, there was nobody better at pissing off opponents with an endless stream of putdowns and stinging insults designed to enrage, madden and make foes freak out.

Revis was also involved in a heated exchange last weekend, when he and Dallas wide receiver Dez Bryant got into it. While their skirmish was far less violent than Beckham and Norman’s, Revis says the most frustrating thing he can do is completely shut down an opposing receiver. That really pisses them off. And though Revis tends to let his play do the talking, he said trash talk is a tool many players use to rattle hypersensitive opponents like the combustible Bryant.

“Whatever I’ve said is probably just [in response] to a guy taking a stab at me,” Revis says. “I really don’t get into all the trash talk. It’s too much energy that you waste, sitting there jawing with a guy left and right. But, like I said, it is a competitive sport.”

So where is the line? What separates good-natured trash talk from flat-out offensive rhetoric?

That can be subjective. There are no written rules to govern trash talk, and determining what can and can’t be said is guided by a player’s moral barometer. But sometimes players go too far.

The topic was raised recently in the aftermath former NHL player Patrick O’Sullivan’s deeply personal account of the horrors he suffered growing up with an abusive father. He said only one player, Vancouver agitator Alex Burrows, had used that information as verbal ammo on the ice. Twice. Once in the minors and again in the NHL.

“When you look at guys who are trash-talkers, people criticize Alex Burrows because I guess he’s good at it,” Avery says. “People certainly criticized me because I was really, really good at it.”

Burrows, who has been accused by other players of crossing that imaginary line just this season, retroactively apologized for making the comments to O’Sullivan. He says he’s grown up since then. Still, he has been taken to task by players and media alike, with some even calling for him to be suspended for words he uttered several years ago.

“The kid tried to be honest and say, ‘Yeah, I did this and I apologize for it. I’m a better person now.’ If the guy said he was a drug addict and now he’s clean, everybody would have stood up and clapped their hands and told him he’s a great guy,” Avery says. “But he admitted he trash-talked another player and he’s saying he’s a bigger person now and nobody is standing up to clap. They just want to kick him and say what a terrible person he is still.”

Wayne Simmonds of the Philadelphia Flyers, a former teammate of O’Sullivan’s, told reporters last week Burrows’ comments were “off-side.” Those comments pushed Avery to go berserk on Twitter. He says Simmonds is full of it. 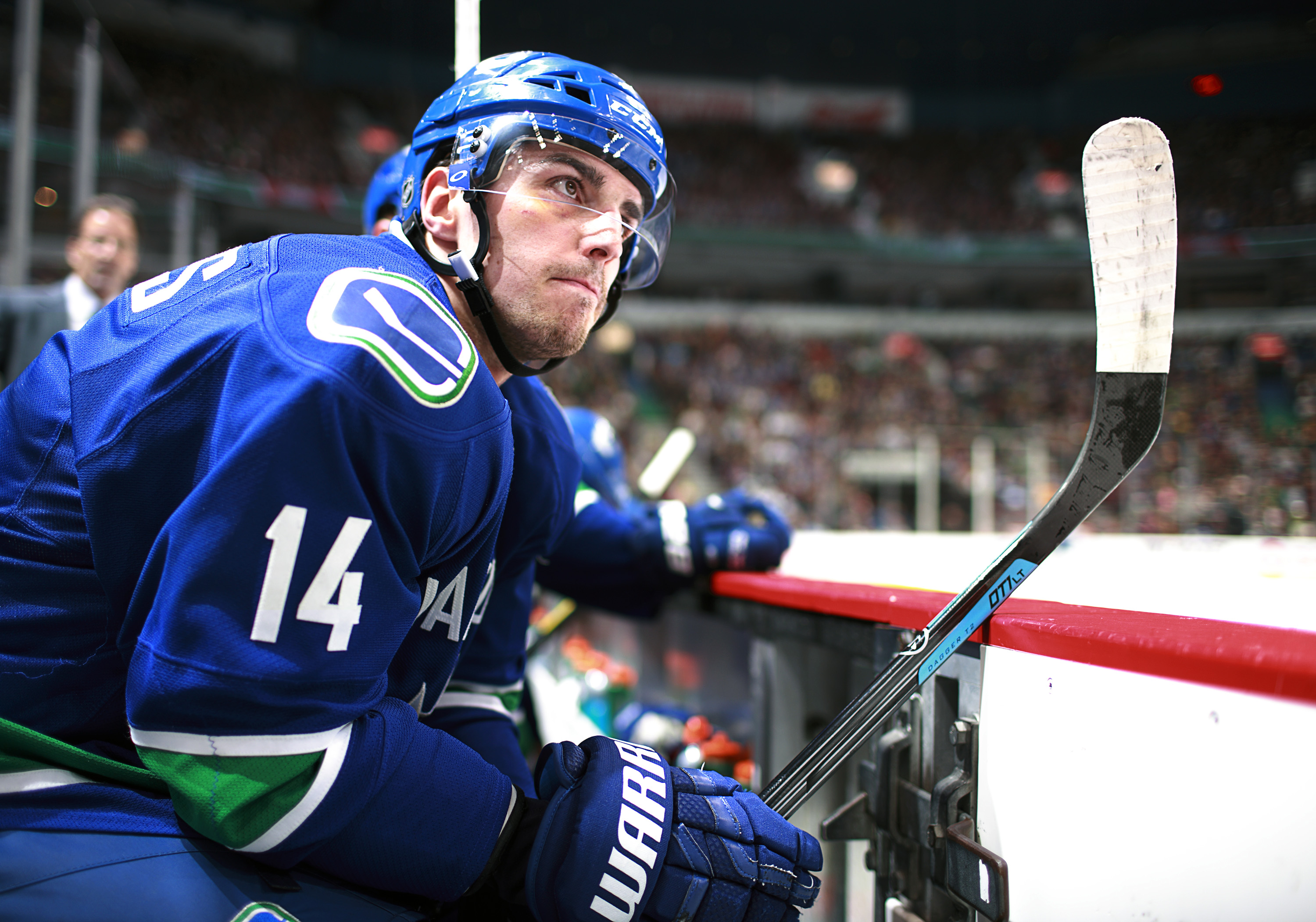 Simmonds, who is black, has also been the victim of racial slurs during his career, which any sensible player or fan will tell you is over the line. Fans have thrown bananas on the ice during his games. But it can be argued that Simmonds, too, crossed the line in 2011 when he called Avery, an advocate for gay rights, a homophobic slur.

“The audacity of Wayne Simmonds is comical to me,” Avery says. “This guy screamed across the ice, from one bench to another, and tells me I’m a faggot. So then this guy goes on the record and kicks dirt on Alex Burrows? I don’t understand it.”

That’s the kind of thing Avery says should be off-limits. During his playing days, he says there were other topics he shied away from.

So what’s OK to say out there?

“I made reference to how guys looked,” Avery says. “I made reference to guys’ extramarital affairs. Girlfriends. Maybe, possibly having sordid pasts. All of the things that, in my opinion, I didn’t think were below the belt. The perception of what’s below the belt is totally different amongst sportswriters and fans – and fans of certain teams. I would say probably 80 percent of New York Rangers fans, they don’t necessarily have a problem with me telling a guy his girlfriend’s ugly. Or that his sister slept with half his junior team. And by the way, if it’s true, it’s fucking true. What, am I not allowed to talk about things that aren’t true?”

The major professional leagues purport to have rules in place to punish players for saying things that are simply too offensive for the field of play. Rarely, though, are those rules enforced. Last year, the NFL proposed a rule that would slap a player with a 15-yard penalty for using racial slurs, but the league’s competition committee did not ratify it, instead saying officials already had the power to enforce the rule (who knew?) The NHL said it did not have definitive evidence of what Simmonds said to Avery that night.

The debate over what’s OK to say and what’s not transcends sports. Donald Trump seems to be resetting the social gauge for what is acceptable to say on the presidential campaign trail on a daily basis. On college campuses across the country, students are protesting against perceived racial insensitivity. The issue is now popping up in sports, and athletes must be more careful about what they say to each other in the heat of competition.

Avery was asked if, in hindsight, he ever said anything that he regrets.

“Not really. No. Because I don’t think I ever crossed the line and the line is you don’t talk about kids,” he says. “You don’t talk about family problems like with drugs and alcohol. Whether I ever said something about a guy who cheated on his wife – that was his decision. That wasn’t being born with a disease like alcoholism or addiction. You’re not born with a disease that says you should have an affair with your sister-in-law because you just didn’t have a choice. So if I said something, or I made references to things like that to send a guy off his rocker because it was going to give us the two points or it was going to keep me in the league longer – then yeah, I said it. Every single time.

“Without even an inch of fucking hesitation.”