Jamal Mayers has a rare spot in the record books. The retired hockey player, who spent 14 seasons in the NHL is one of seven black men out of over a thousand names in the history of the league who has had his name engraved on the Stanley Cup. But it almost didn’t happen.

“My brother allowed me to play when I was 11 years old. I feel indebted to him for that,” Mayers says. “But the reality is that there’s a huge cost to play the game. That stops a lot of kids from playing.”

It costs a lot of money to play hockey. Equipment alone – skates, two sticks, pads and a helmet – could run over a thousand dollars, not to mention all the gas money that goes into getting a kid to practice, games and out-of-town tournaments. With two kids in the family and financial restraints to deal with growing up in Toronto, Mayers says the family had to decide between him and his brother Allan to see which one would be able to play.

U.S. Men's Tennis has a Diversity Problem - But What's Being Done to Fix It?

You’ve probably noticed, but hockey also isn’t the most diverse sport. It also isn’t the most popular in North America. It has its huge following in Canada, but many believe the thing that is holding the sport back in the United States is its lack of inclusivity, and that a combination of economics and access to the sport are the main factors explaining why the sport continues to be overwhelmingly white. But community leaders and the NHL have a plan to try and reverse that.

“I think it’s about kids here seeing that it’s actually possible. They’ve never seen a hockey stick before,” Mayers says. “It’s the same principles as any of the ‘ball’ sports, like soccer and basketball. You’re creating two on one’s all over the place. It’s important that we did this the right way. We can’t just put kids on the ice and say ‘Let’s play hockey.’ They have to get comfortable holding a stick.”

Even though Mayers, now in his second year as the Blackhawks Community Liaison, grew up in a city with kids from diverse backgrounds, he recognizes how hard it can be for some of those kids to get to a rink. The NHL has footprints in many of America’s major cities through their teams, and with new programs, they’re trying to bring the game to a wider audience in hopes of growing new fans and also future prospects as well. The Philadelphia Flyers partner with the Ed Snider Foundation, the San Jose Sharks have the Sharks Ice Hockey League in Oakland, the New York Rangers team up with Hockey In Harlem, the Blackhawks with 1st Goal Foundation’s Hockey On Your Block in Chicago and the Capitals have a relationship with the Fort Dupont Ice Hockey Club in Washington, D.C., which is the nation’s oldest minority-oriented youth hockey program. Its focus is implementing new programs aimed at getting inner-city kids to play hockey.

“When we get the new sheet of ice, we’ll be able to eliminate all obstacles. We’re going to bus the kids to the facility, ice time and equipment will be taken care of,” Mayers explains. “Making the next NHL hockey players is possible but it’s more about letting kids know that it is possible. Learn something new. The first part is getting in the schools and piquing their interest in hockey.”

Annie Camins, the senior director of Fan Development for the Blackhawks, has a simple but effective plan on how to get more kids in the inner-city to play hockey. In many American cities, the hockey rinks are in suburban areas. In Chicago, there are only four indoor rinks within the city limits.

“We want to get sticks in the hands of kids by taking the cost out of by letting them play. They learn about hockey, they learn about teamwork and they learn about the sport,” Camins says. “We don’t have as many rinks as other states. I think we’re trying to get more rinks in the city. We’re building a rink nearby that’s going to be ready by December 2017.”

The Blackhawks have a youth hockey component called G.O.A.L. (Get Out And Learn). The plan is to introduce sport at the grassroots level to kids who may not otherwise have the opportunity to give hockey a try. The program brings hockey to schools, community centers and other places where kids can play in safe, structured environments. To make the game more accessible, the Blackhawks provide full sets of hockey equipment to each school. Over 90,000 kids at 160 Chicago area schools have participated in the program this year. 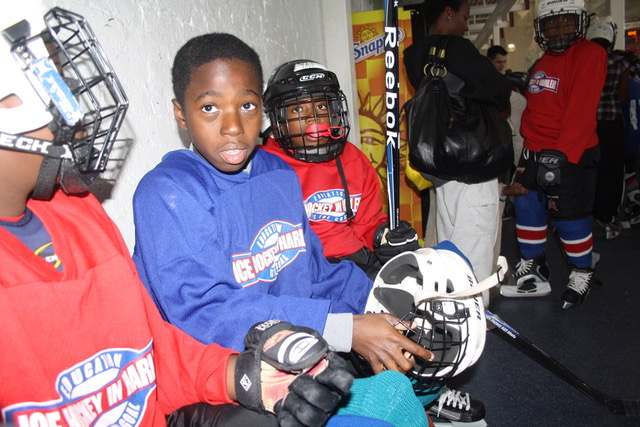 Camins says that the Blackhawks, while introducing inner-city kids to hockey, aren’t immune to society’s polarizing issues. The team has recently gotten the Chicago Police Department’s hockey team involved with the their efforts, a way of fostering some sense of trust between the community and the police force.

“About 20 officers are involved. They don’t come out in their police gear,” Camins says. “They come out in their CPD hockey gear. They try to break down that fear of law enforcement and show them the game of hockey. Our job in the get kids to play hockey while removing all costs barriers.” Youth hockey programs across Chicago have been the benefactors of the Blackhawks recent success.

Jason Newman, the head coach of Chicago’s Lane Tech College Prep’s hockey team says youth hockey in Chicago is growing despite being light years behind what goes in traditional hockey states like Michigan, Minnesota and Massachusetts.

“The way hockey works in Illinois, it’s all governed through the Amateur Hockey Association of Illinois. Technically, the teams are affiliated with the school, by not run by the school,” Newman says. “The schools here can’t support a team on their own. They grab players from feeder schools.”

Newman believes that the Blackhawks being a competitive team in recent seasons and the rise of local hockey are intertwined. The sport is more popular than ever in the Windy City and more people want to get involved.

“Hockey in Chicago has grown tremendously. The Blackhawks have made a tremendous impact. People want to play hockey,” Newman says. “Most of the rinks here are run by the park district. Chicago has a limited amount of ice. The youth teams, the figure skaters, and the adult players, all have to fight for ice time. The more ice we get in Chicago, the better.”

William Douglas, who runs The Color of Hockey, a blog that highlights people of color in the sport, thinks hockey’s diversity problem has less to do with economics and that more black people would play hockey if not for their peers shaming them for playing a “white man’s sport.”

“In our community, people still think it is a white sport. My black friends thought I was out of my mind,” Douglas says. “Your friends might rag on for playing but it is up to the person if they want to learn how to play the game.”

Douglas, who started playing hockey at 13 in his native Philadelphia, says that the NHL has taken heed to changing demographic shifts in North America.

“I think it is smart for the NHL to do this. North America is changing, and it’s getting browner. I think they get it,” Douglas says. “I think it is the right thing to do and they take it to heart. I don’t think it for show. This is something they are generally interested in.”

The time for the NHL to break out of being a niche sport seems to be now. Even though the NFL’s viewership is down, the NHL has been shrewdly found ways to grow their viewership.

“Hockey is an expensive sport. We try to introduce the sport to non-traditional communities,” says John Sanful, the executive director for Ice Hockey In Harlem, a program that has had an ongoing relationship with the Rangers going on 30 years. “Kids these days have seen PK Subban and Seth Jones and now want to give the sport a shot. Seeing Subban and Jones motivates and inspires them.”

Sanful, a black man who grew up in Harlem, who later moved to Brooklyn, first gave hockey a try as a kid. He said that none of his kids ended up in the NHL, but some of them ended up playing college hockey.

“Growing up, I saw Grant Fuhr and Tony McKegney. That showed me that if they can do it. So can I,” Sanful recalls. “Our program uses hockey as a gateway to a better education in order to expose kids to things they normally would have access to.”

Douglas echoes Camins’ sentiments on building a fanbase like the Blackhawks have can lead kids to give a hockey a shot.

“Chicago had lost a generation of hockey players and hockey fans due to the games not being on TV. They’ve done an amazing job of catch up,” Douglas says of previous Blackhawks owner Bill Wirtz’s decision not to televise games, believing that lost revenue. There’s that, and the practice facilities. “It’s tough hauling hockey gear to the ‘burbs. It’s nice to have rinks where the kids are. Where kids can play ice hockey in another issue. There are very few ice skating rinks right smack in the middle of most urban areas”

Mayers hopes that one of the kids who goes through Hockey On Your Block or the G.O.A.L. program ends up in the NHL. He has kept tabs on the impact that Toronto Maple Leafs center Auston Matthews, an Arizona native of Mexican descent, has had during his rookie season. The league also has a long history with Native players from Ted Nolan to T.J. Oshie. Between that, players from different backgrounds, from Punjabi to Chinese, making their way onto rosters and the programs aimed at getting more African-American kids on skates, hockey could see its diversity issues slowly evaporate over the next decade, and the sport and NHL could benefit in huge ways.

Of course, that all takes work.

“It’s about thinking it is possible. Seeing Auston Matthews and PK makes a difference,” Mayers says. Raising a new and larger generation of hockey fans is the goal, but Mayers, the former NHL player, has an even bigger dream for the programs. “It would be great if one of these kids who wouldn’t have access to hockey otherwise, ends up in the NHL.”