The unceasing rain drips thick from the elms that line the road. Your horse shakes the water off in great cascading sheets from his flanks, exhausted from a daylong ride to here, the middle of nowhere.

A hundred yards ahead the lights of an inn wink slowly out of the gloaming, a welcome respite, a waypoint. Beyond it in the darkness, the great maw of the beast: an unforgiving cavern split from the scarred side of desolate and lonely Mount Stern. 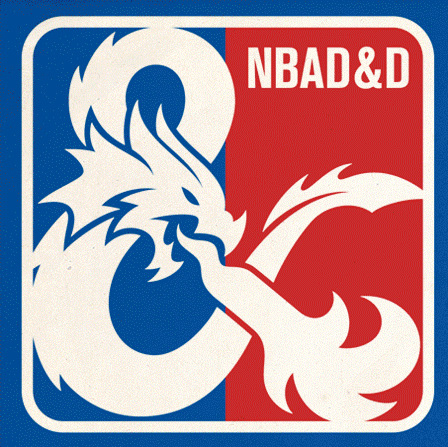 The door of the inn slams shut behind you and you slide the rain-soaked hood from your head, eyes adjusting to the muted glow of firelight from a hearth and candles strewn about the common room. There are other adventurers here, drawn to this outpost by tales of the Larry O’Brien Trophy.

At first light, they shall set out in search of it, scaling cragged ridges and exploring darkened caverns, traversing the endless expanses of the regular season before reaching the hellmouth of the NBA Playoffs. It is a voyage fraught with peril and trapping defenses, and most will not survive. Do you dare join them?

Assemble your party, but choose wisely. 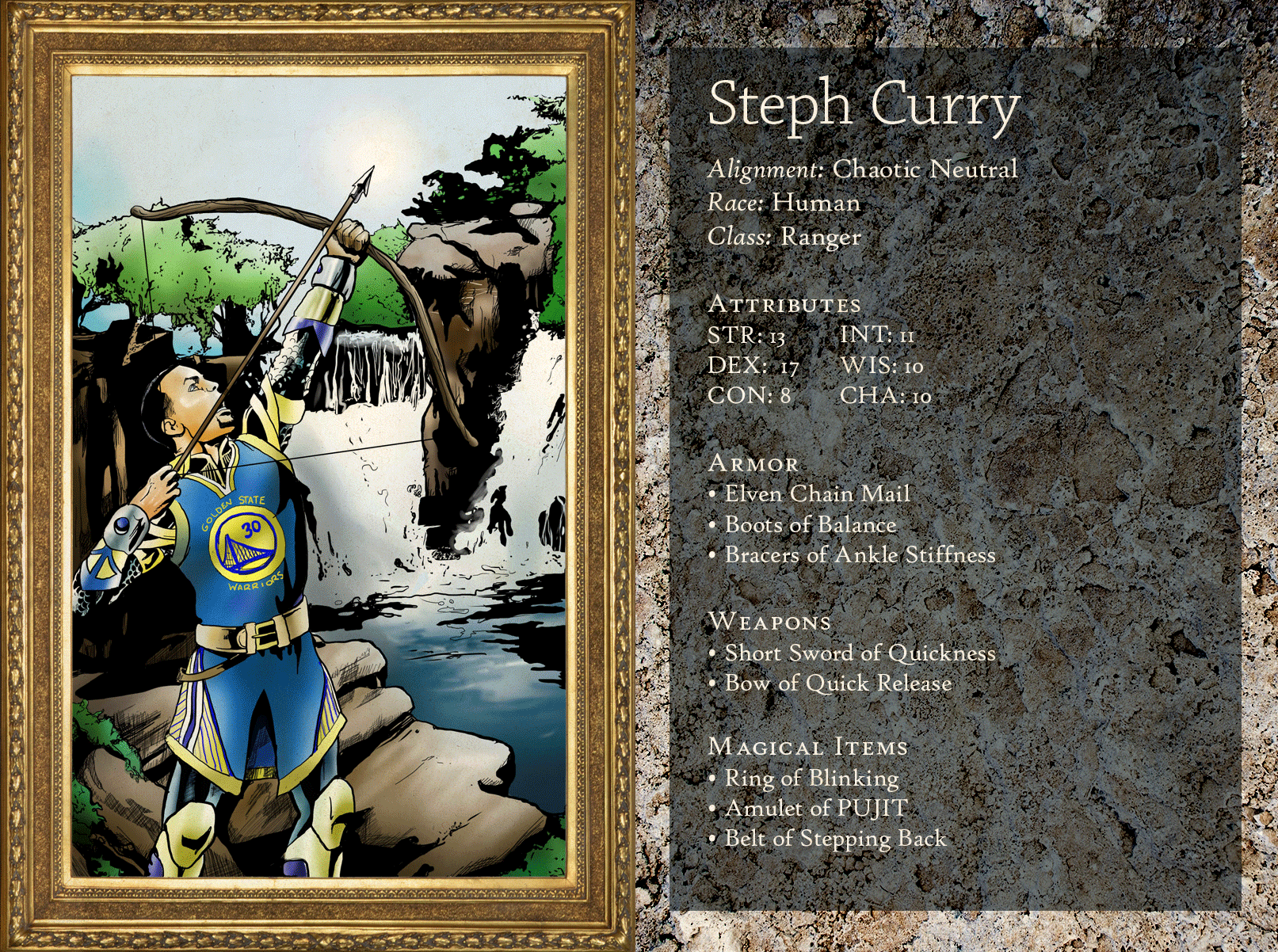 STEPH CURRY
Clad in Elven Chain Mail that glints in places beneath his tunic, Steph Curry stalks the edges of the battle, peppering foes with arrows from his Bow of Quick Release. As threats loom, he gives a clockwise turn to his Ring of Blinking, wrongfooting attackers and sending them stumbling as he disappears then reappears directly behind them. Curry is more than just a long-range threat, though. His high Dexterity lets him weave into the thick of the battle, slashing through traffic with his Short Sword of Quickness. Staying out of reach of attackers is essential because his low Constitution means even a glancing strike can fell him, although his Bracers of Ankle Stiffness provide a measure of extra protection. 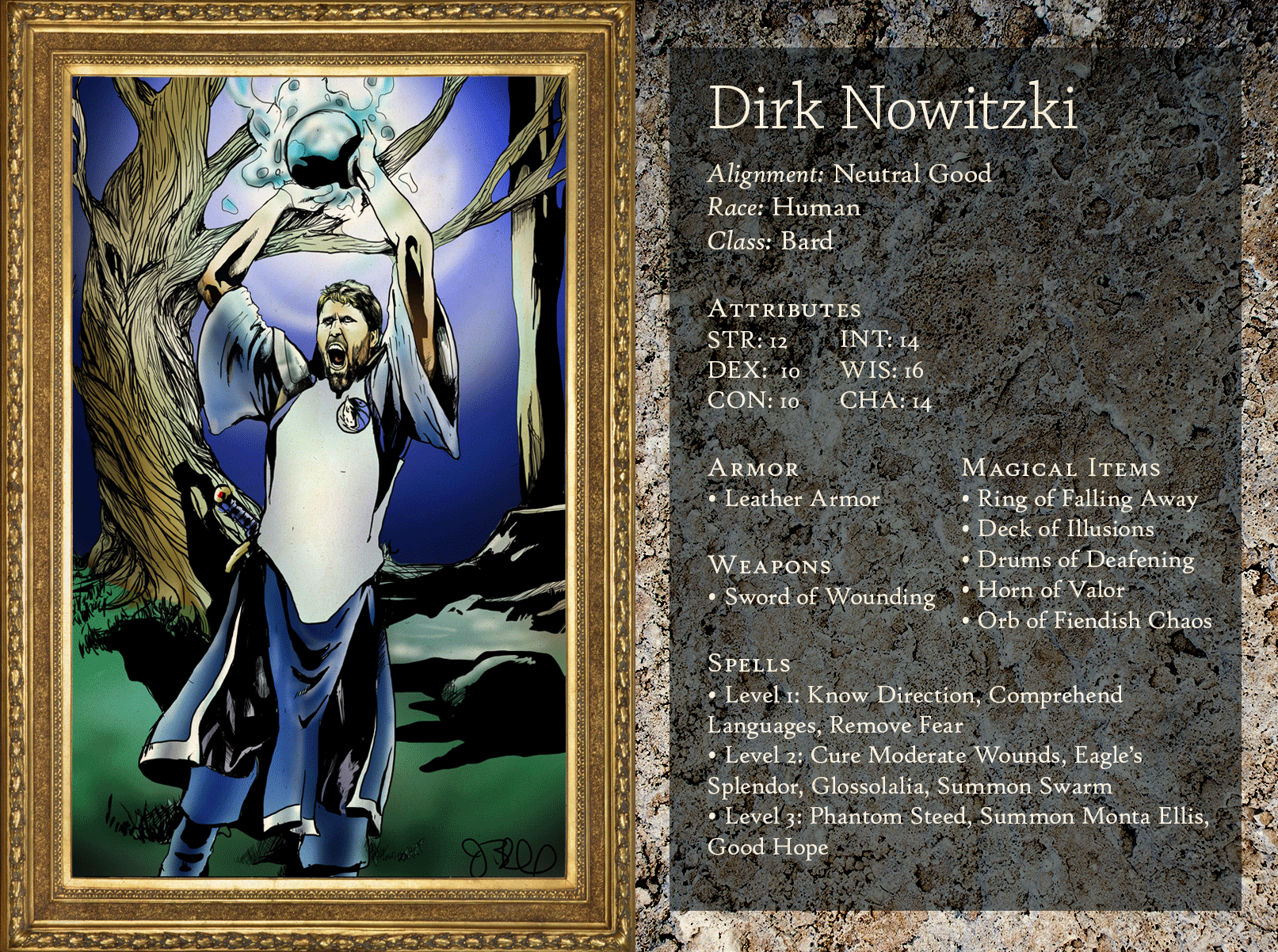 DIRK NOWITZKI
Beguilement is the stock and trade of the bard and Dirk Nowitzki is no exception. Now an old hand, Nowitzki’s goals are no longer wealth or glory as much as the journey itself. He loves the road above all else, and his fingers spin a magical, enthralling song on his Lute of Valor. His Ring of Falling Away lets him connect chords and melodies no one else could, but don’t mistake his benevolent air for helplessness. His Sword of Wounding is not the most powerful, but the damage it causes cannot be healed by regeneration. Rather than overwhelming you with force or quickness, Nowitzki inflicts nicks and cuts that bleed slowly. 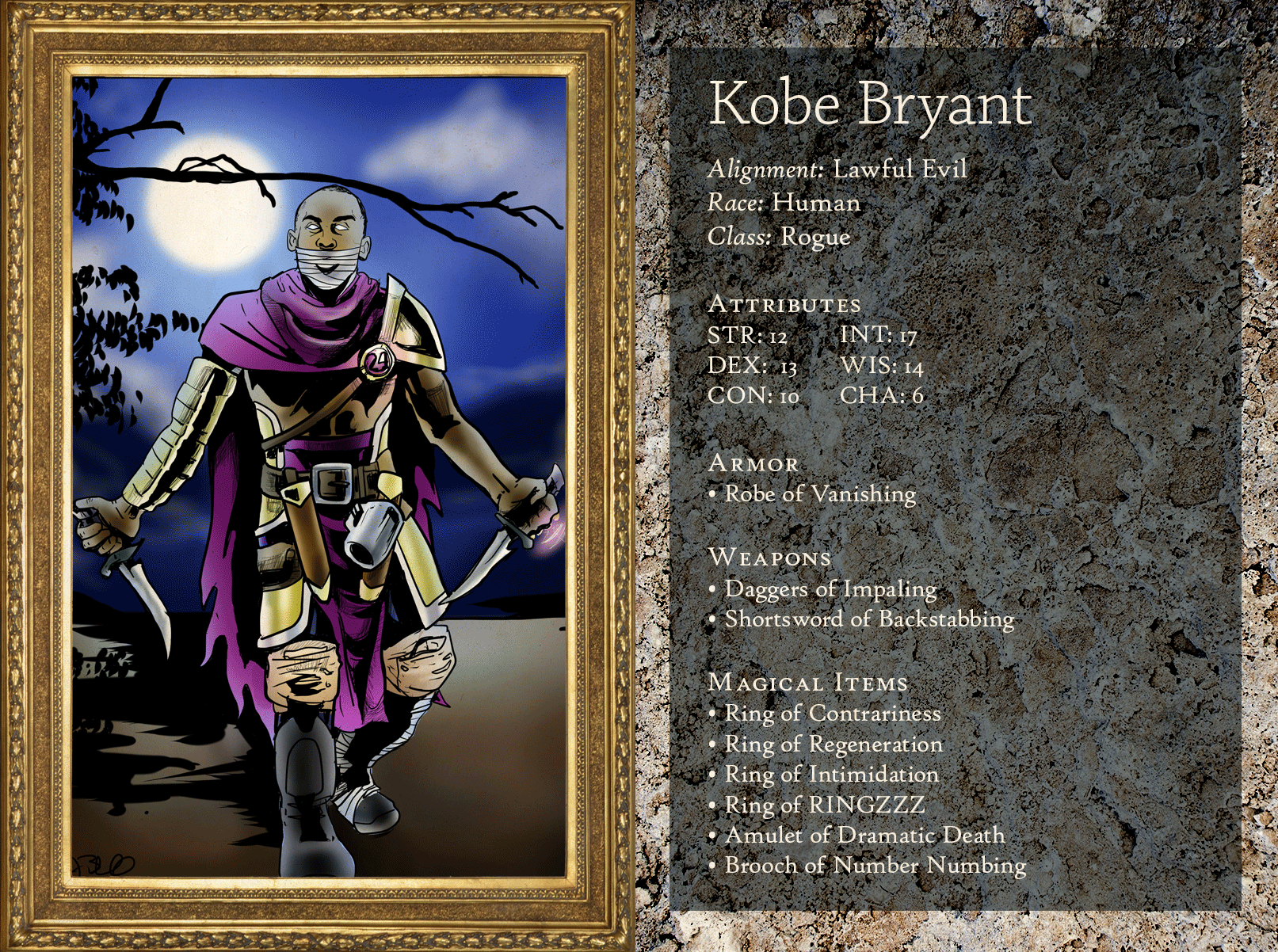 KOBE BRYANT
Sometimes old rogues are the most dangerous. Well past the age where his Dexterity and cunning could get him out of almost anything, Kobe relies now on tricks and years of hard-won treasure hunting to stay effective. His Brooch of Number Numbing causes all those who fail a save roll to forget the relative value of numbers, while his Ring of Regeneration – acquired from a master of the Dark Arts in Upper Bohemia – offsets his diminishing Constitution, and then there are the rings: a Ring of Contrariness, a Ring of Intimidation, a Ring of RINGSSSSS – begin to count them and you’ve fallen into his deadly trap. 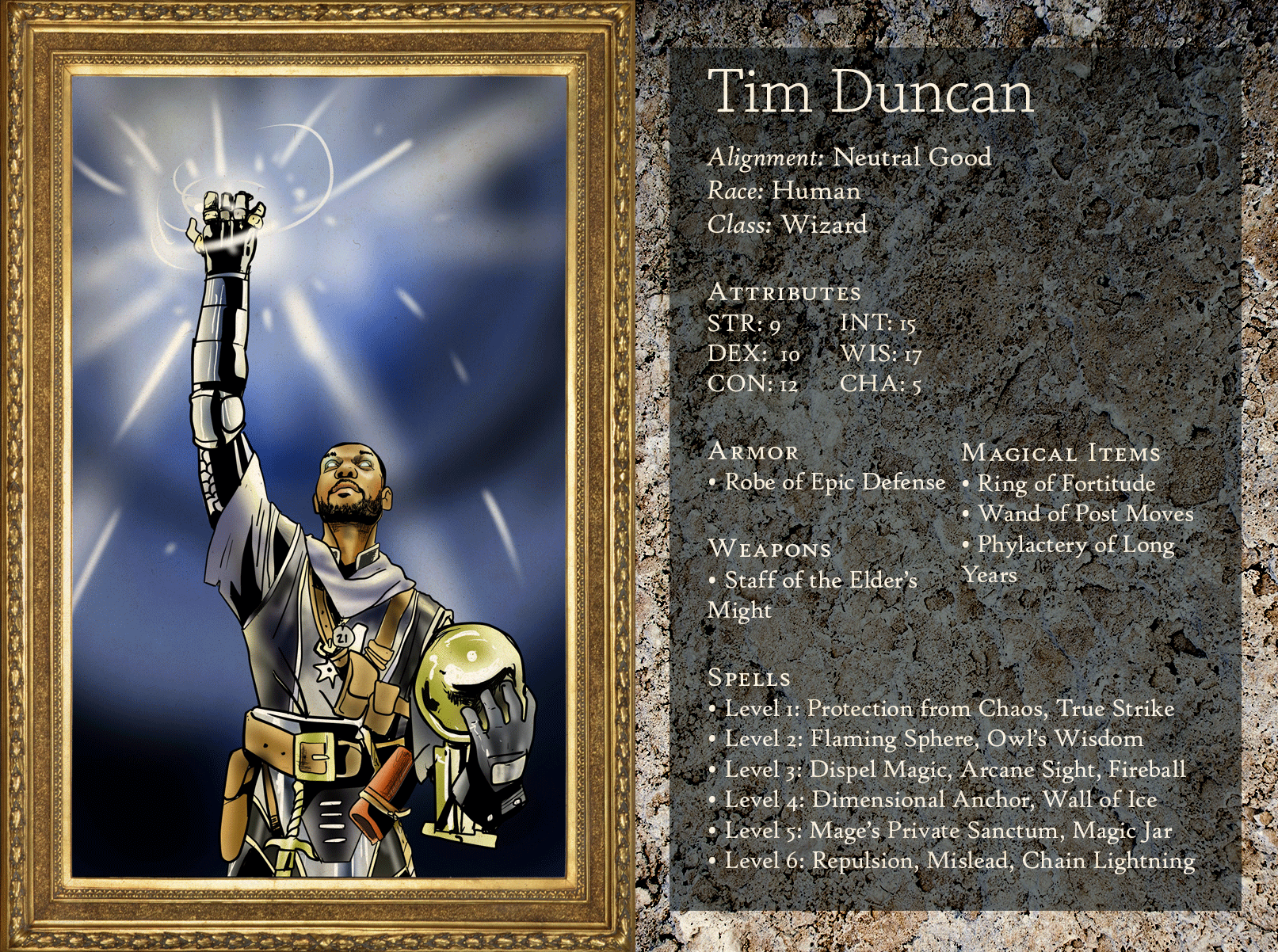 TIM DUNCAN
Don’t be fooled by the flecks of gray in his beard. Nor the way he hunches a little when he walks or hangs back a bit in lesser encounters, saving himself for the toughest, highest-level enemies. Every season, it seems like his Wand of Post Moves should be out of charges or that his Ring of Fortitude will run dry, but dismissing his still formidable abilities ignores the vital Phylactery of Long Years he wears at his wrist. His last trip into the yawning hellmouth of the Playoffs was a successful one, but even he knows he won’t be able to keep going back out there forever. Before long, he’ll settle down, maybe run a nice stable or even train young adventurers in the ways of battle and the road. 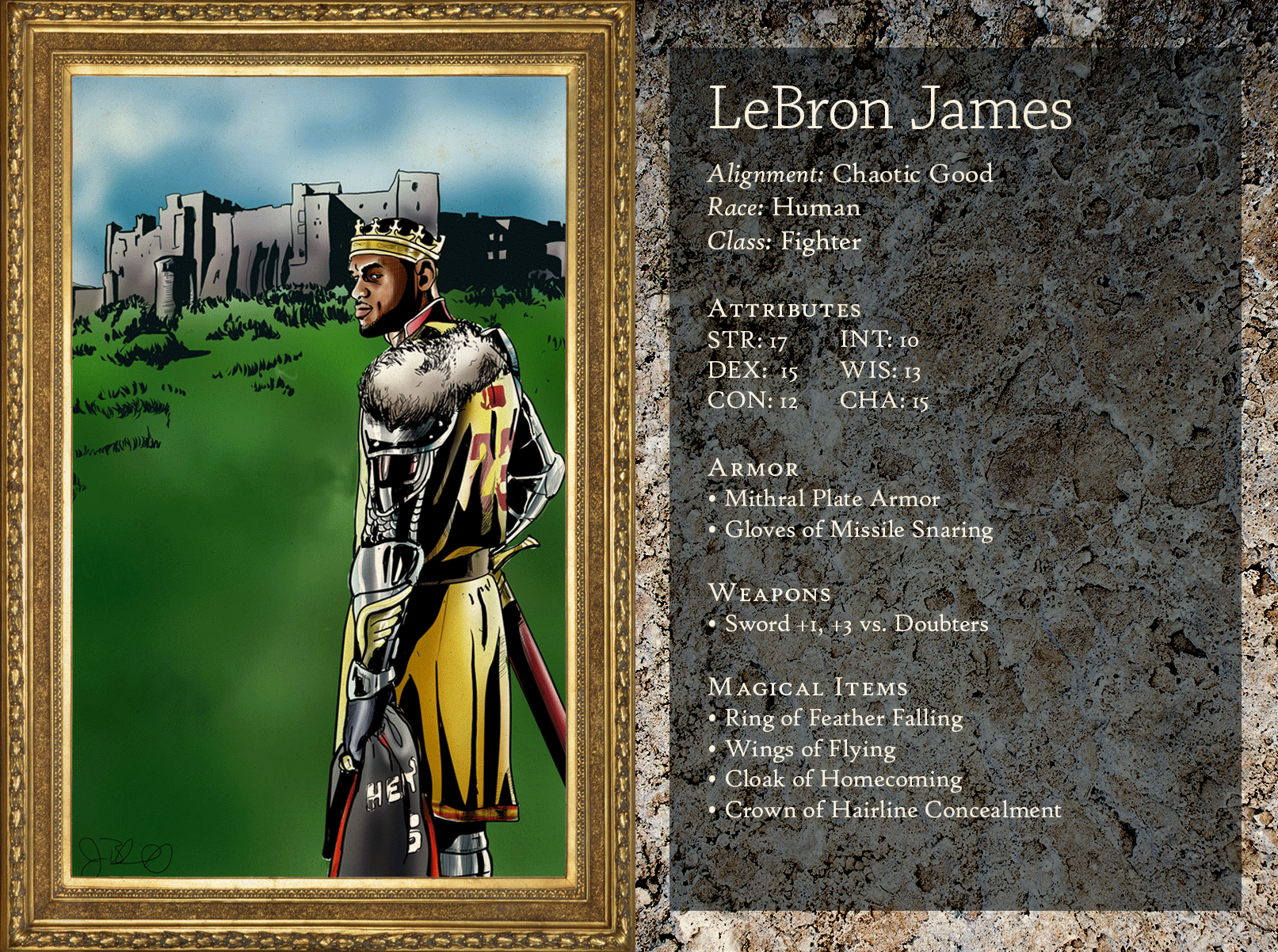 LEBRON JAMES
Can alignments shift? During the first years of his career, fighting close to home, LeBron felt Neutral Good: neither following the rules nor completely upending them, he was bent on bringing glory to his people. But when he left to ply his trade far from the shores of Cleveland, he seemed Chaotic Neutral: less concerned with what his actions meant or how they resonated and more concerned with bending and warping the world to fit his own personal vision.

But now, returning to the land of his youth, we can see him as a bit of both: dedicated to crowning his career in glory out of loyalty, but with little regard for the tried and true paths to that end. Along the way, he’s acquired a diverse set of tools to help him: a pair of Gloves of Missile Snaring he uses to track down wayward shots in transition; a Ring of Feather Falling that lets him absorb contact and gently flutter to the ground; and a Sword of +1, +3 vs. Doubters, with which he slashes through hordes of unbelievers. Resisting specialization as a ranger or paladin, LeBron is simply the ultimate all-rounder, a fighter through and through. 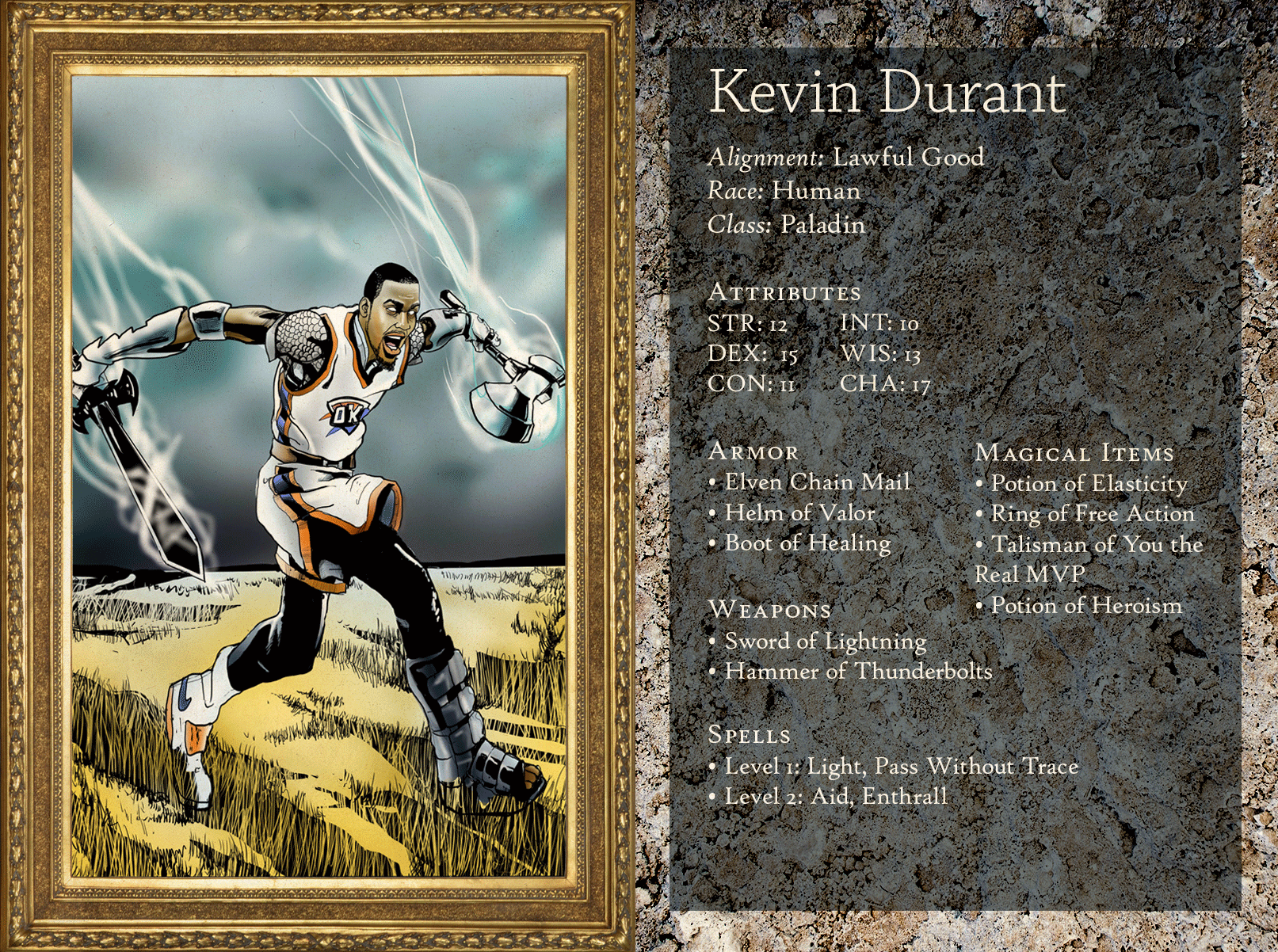 KEVIN DURANT
Paladins are the leaders of men, armed with blades of steel, girded in mail and wrapped up in a shroud of charisma. Durant’s charisma is of the quiet sort – eschewing warmth and wit for a quiet and righteous stoicism. In battle he is relentless, leading from the front and always placing himself in the center of the fray. Sacrificing defense for speed and versatility, Durant fights in lighter Elven Chain Mail and works without a shield. This allows him to wield his Sword of Lightning and Hammer of Thunderbolts simultaneously, making him capable of overwhelming any opponent with power and agility.

Most treasured among his possessions is the Ring of Free Action, allowing him freedom from impediments, natural or magical, attempting to slow him down or stymie his attacks. A critical wound to his right foot will keep out of the fight for the time being, but don’t underestimate his ability to turn the tide further along. 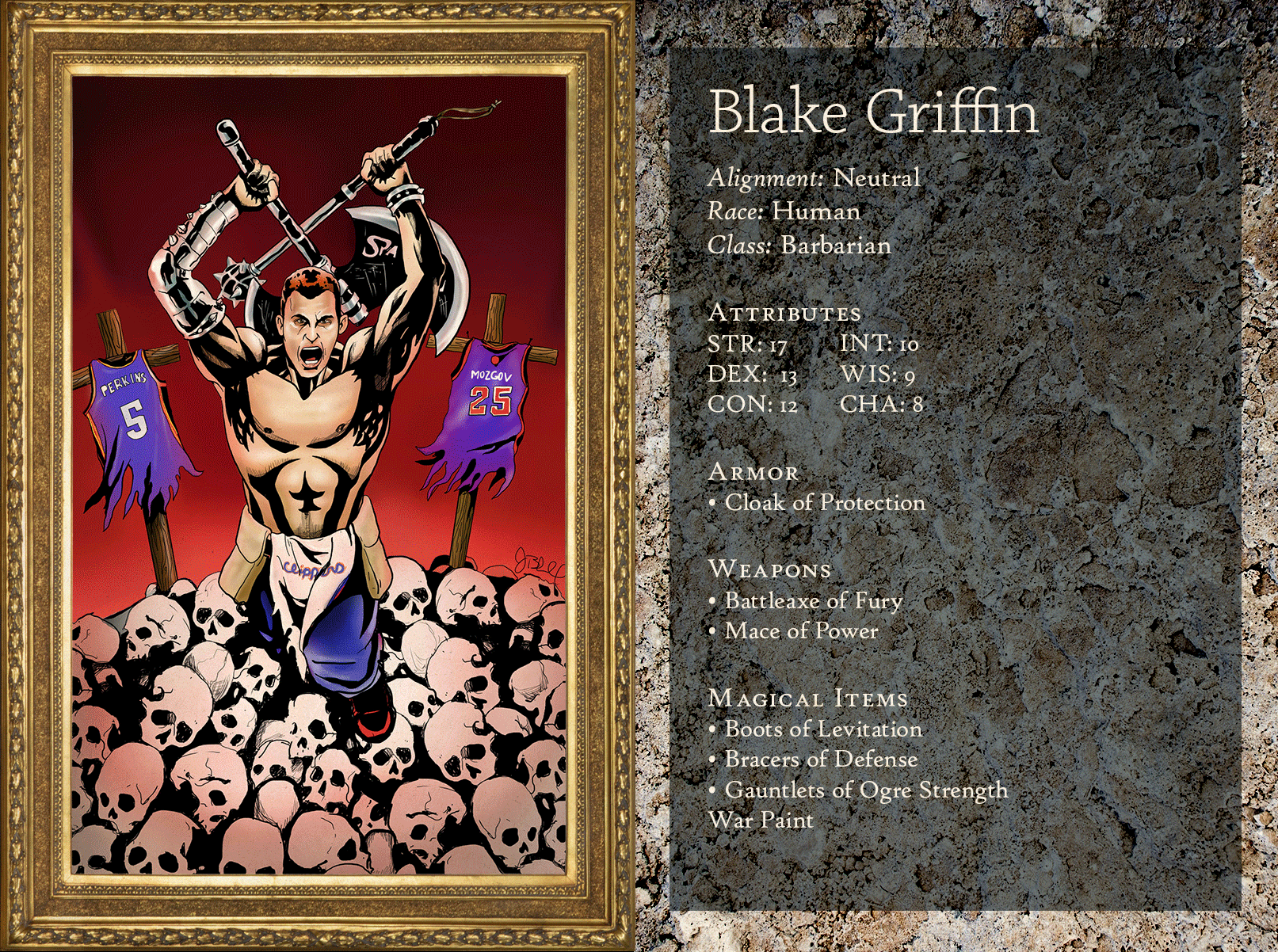 BLAKE GRIFFIN
Every good party of adventurers has a physical backbone, a warrior whose strength and ferocity can be relied upon to rip through the toughest pack of orcs and send even a forest troll running for the highlands. Griffin, the barbarian, is that warrior. He wears no armor, preferring to let his physical form shine the light of intimidation in even the darkest dungeon. Fighting with his enormous two-headed Battle Axe of Fury in one massive hand and the legendary Mace of Power in the other, Griffin simply overwhelms most opponents with force alone. But on those rare occasions where force alone will not do the job, his Boots of Levitation allow him to rise above his enemies and rain destruction down upon their heads. 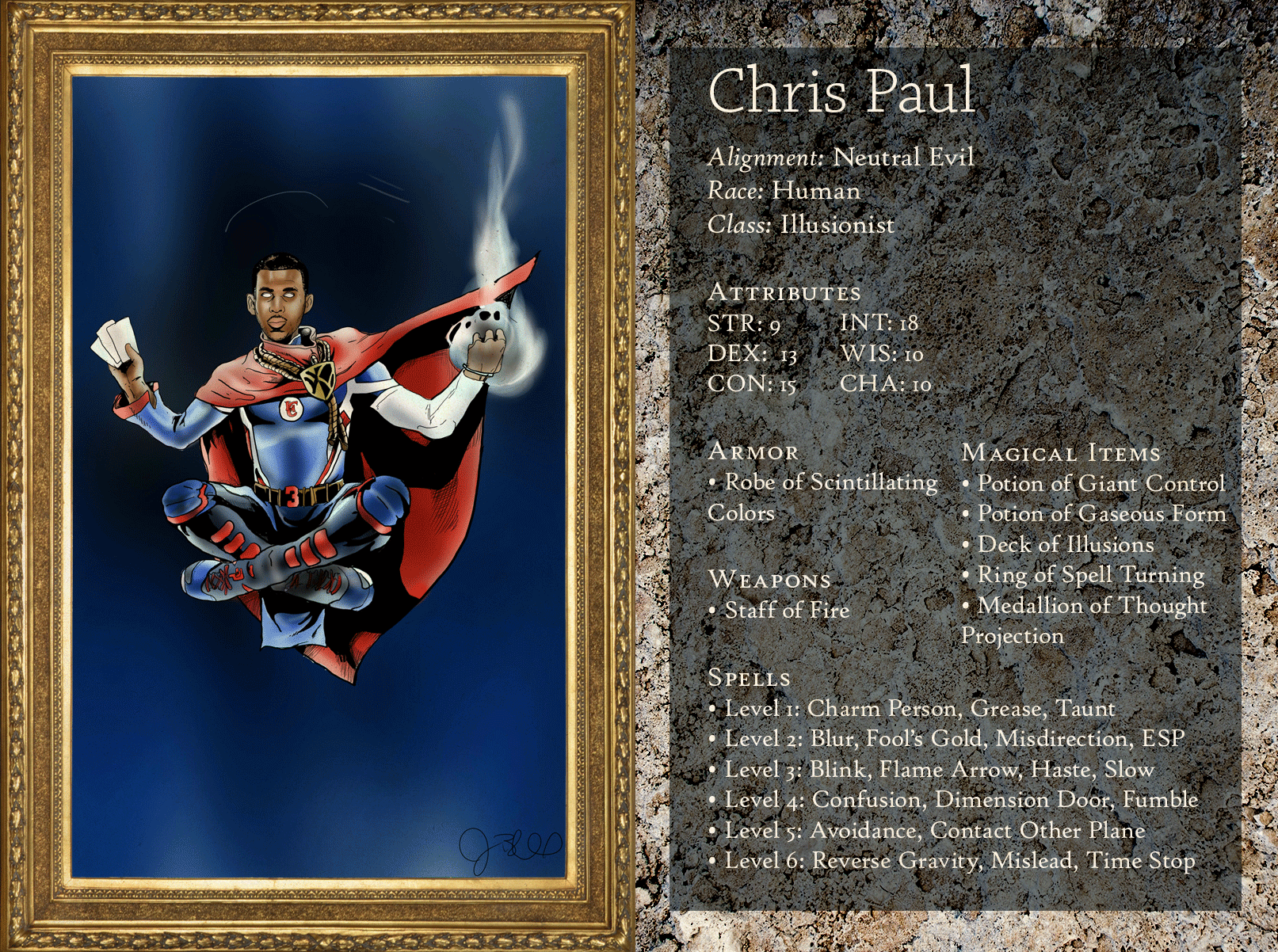 CHRIS PAUL
The Schools of Magic are diverse in their powers, but Paul has chosen to ply the mystical trade of illusion. His superior intelligence lends strength to his spells and his Neutral Evil alignment means he draws a surfeit of pleasure from the mental manipulation of his foes. His spellbook is overflowing with sorcerous incantations like Blink, Blur, Misdirection and Time Stop, sowing confusion and panic in battle, bending the very laws of perception back onto his enemies. Even when his spell components are exhausted, his power is not diminished as his carefully cultivated collection of magical treasures – Deck of Illusions, Bag of Vanishing, Robe of Scintillating Colors – allow him to continue sending his opponents chasing their phantasmal tails. 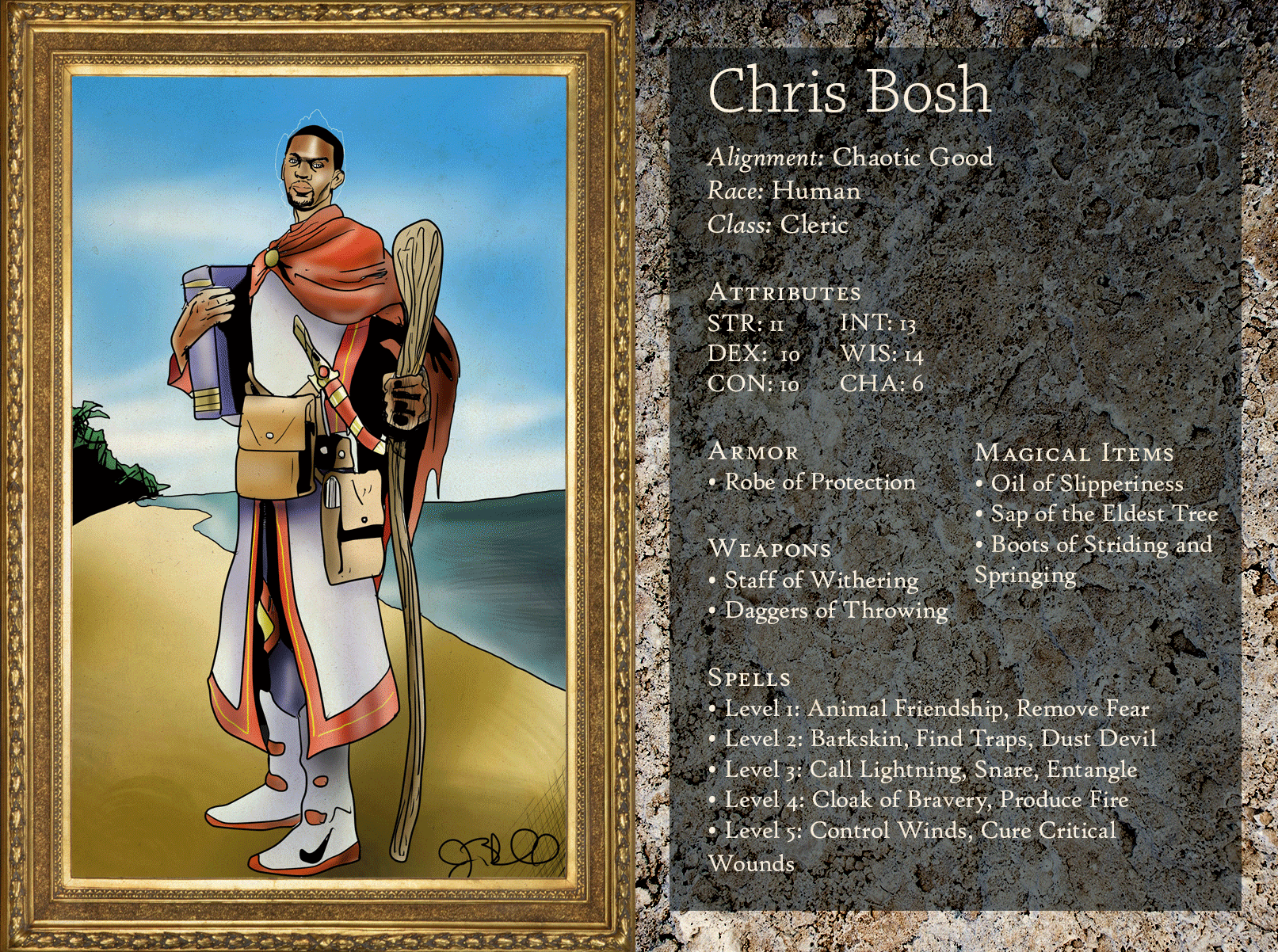 CHRIS BOSH
It is the job of the Cleric to bind the party together, healing wounds, buoying optimism, lending wisdom and holding their own in battle. The chants of his deep and ancient faith bring him the power to nick away the strength of his enemies with spells like Entangle, Snare, Call Lightning and Control Winds. He is not helpless with a weapon in his hands either, able to call down damage from a distance with his Daggers of Throwing and Staff of Withering. Although his attributes lean away from charisma and toward intelligence and wisdom, his ability to fill the many vessels of necessity makes his contributions both valuable to and valued by his brave companions.