If you step off the elevator on the wrong floor in a Las Vegas casino only to see a man holding a lucky rodent skull, three women in cleavage-baring horse-jockey outfits and hundreds of frothing men screaming themselves hoarse, end times might seem nigh. But if you handicap horse races – the art of figuring out which horse is likely to run the fastest in a given race – this is Shangri-La. Welcome to the National Handicapping Championship, billed as “the richest, most important and most prestigious tournament for horseplayers in the world.”

Every year since 2000, a motley band of character actors, backroom politicians, ballerinas, coastal-elite corporate execs (including the former president of Vince McMahon’s failed football league, the XFL), opera-house employees and run-of-the-mill railbird gamblers (at least that’s who I met) descend upon Las Vegas to compete in the annual event. In late January, I traveled to Sin City to experience the adrenaline rush of being in a ballroom with hundreds of horseplayers gunning for an $800,000 first-place prize, and to try and learn the tricks of the handicapping trade and make a little money while gorging myself on the complimentary cold cuts.

Gridiron Gangster: How a Vigilante Gambler Took Down an Alleged Crime Boss

The NHC goes down at Treasure Island, a pirate-themed resort in the shadow of the gold-encrusted Trump Hotel on the northern end of the Strip. The competitors gather in two ballrooms on the hotel’s second floor. Eighteen massive screens adorn the larger ballroom’s walls and broadcast live horse races from across the country. Players place fictional bets in real races in a row of machines that resemble voting machines in a polling place. The races that the players bet on take place at eight tracks, from Gulfstream Park in Florida’s Broward County to Golden Gate Fields near Berkeley. And there’s a cash bar to fuel the action.

When a race occurs, the competitors rise to their feet and scream at the screens, some of them smacking their thighs with rolled up copies of the Daily Racing Form in an effort to prod on their horses. It feels like being on the floor of a stock exchange during a market crash, or if everyone in a Price Is Right studio audience each drank a pot of coffee. It’s the horse racing Hunger Games, but instead of Katniss Everdeen everyone looks like your wayward uncle who enjoys playing the ponies.

While the casino one floor below teems with chain-smoking slot machine players, drunken bachelorette parties, sex workers and frat boys, the NHC players aren’t in Vegas to party; they’re on a mission to win big. Dan Kovalesky, a 33-year-old NHC competitor from Scottsdale, Arizona, says, “Last night, I just did my homework on today’s races in my hotel room while watching Titanic on TV. Nothing scandalous.” But not every competitor is as squeaky-clean as Kovalesky. Treasure Island gives every participant in the tournament a complimentary room. “It’s hundreds of degenerate gamblers,” a hotel employee (who asked not to be named) says. “Of course we want them in the casino.”

The straightforward rules of the NHC are deceptively simple. Competitors are given a fictional bankroll of $144. Over the course of the tournament’s first two days, players place $2 bets on horses to win and place (or, to finish first and second). The races are real, but the money wagered is phony. On the NHC’s final day, the field of 627 entries is whittled down to 66 and then trimmed down once more to a final table of 10. 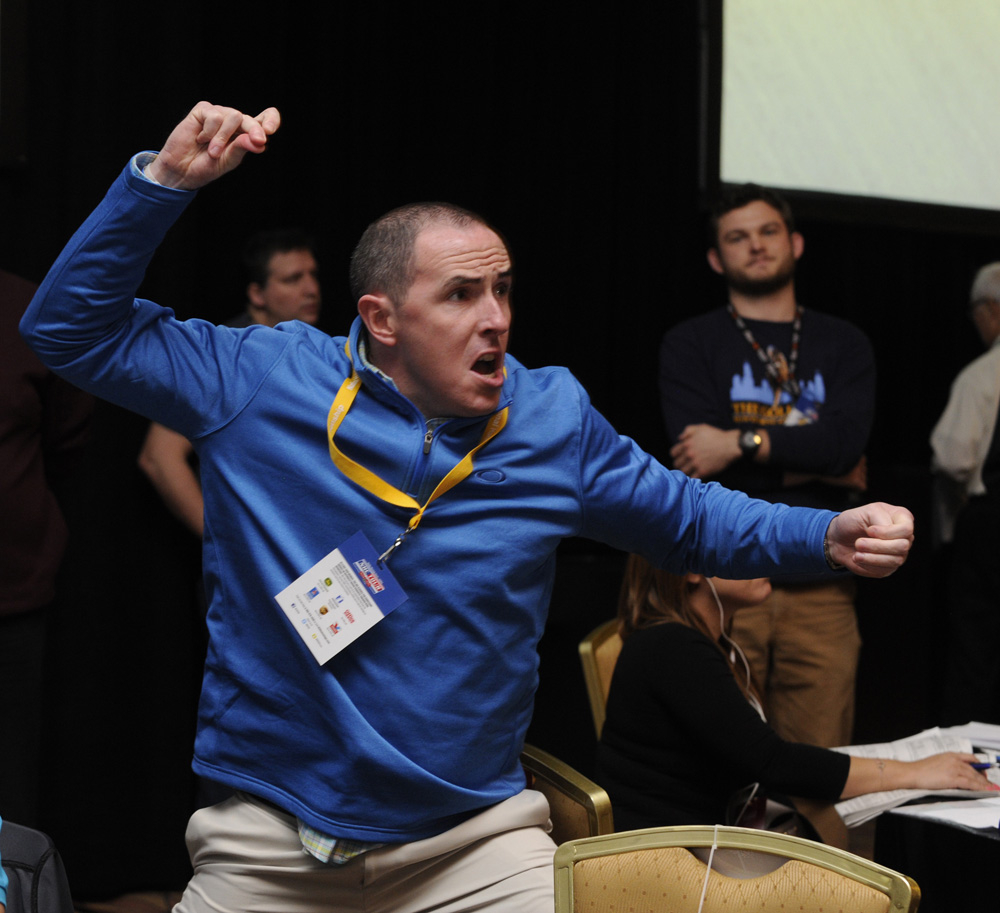 On the tournament’s second day, I traverse the ballroom floor and badger competitors for tips on how to become a master horseplayer. My plan was to take their advice, run down to the sportsbook on the casino’s main floor, and place real bets on the races they were playing. The players sit at circular tables in the ballroom, guzzling coffee and Diet Coke, with data-filled spreadsheets open on laptops and annotated Daily Racing Forms splayed out in front of them. In between races, with the horse players crunching numbers, it looks nothing like a Vegas bacchanalia. It’s more like a Silicon Valley hackathon or a deleted scene from Moneyball.

Linda Rodriguez, a three-time NHC competitor from San Diego, and former dancer with the California Ballet Company, offers a suggestion on how to choose a winning horse. “Horse racing is like ballet in that it’s performative,” she says. “The workouts are like rehearsals, the race is the performance. I handicap more on physicality than numbers. I try to tell by a horse’s musculature, how it moves, how it performs.”

Dennis Johnson, a 46-year-old handicapper from Plainsfield, Illinois, relies on a lucky talisman to help with his picks. “When I was 18 I was walking home from the track and I found this rodent skull,” he says, displaying a two-inch-long cranium with massive fangs. “Could be a squirrel, could be a raccoon, I’m not sure. But I took it to a friend’s house and I just started winning everyone’s money. Dice, poker, blackjack; I couldn’t lose. I haven’t used the skull for years but I brought it to Wrigley Field in October. The Cubs needed all the help they could get, and it worked. Now I’m at Treasure Island. They’ve got a giant skull outside the hotel. I wanna say this was meant to be, but I don’t count my skulls before they hatch.”

Horse racing’s popularity received a brief jolt with American Pharoah’s 2015 Triple Crown win, the sport’s first since 1978, but has been on the decline overall. Handicapping horse races might seem like a fading pastime, like baseball scorekeeping or ham radio, but if the NHC is any indicator, its popularity is surging. At the first NHC in 2000, 160 players competed for $192,000 in prize money. This year, 654 entries competed for $2.9 million on the line. Much like with poker, the handicapping action today is online, especially with the next generation of horseplayers. 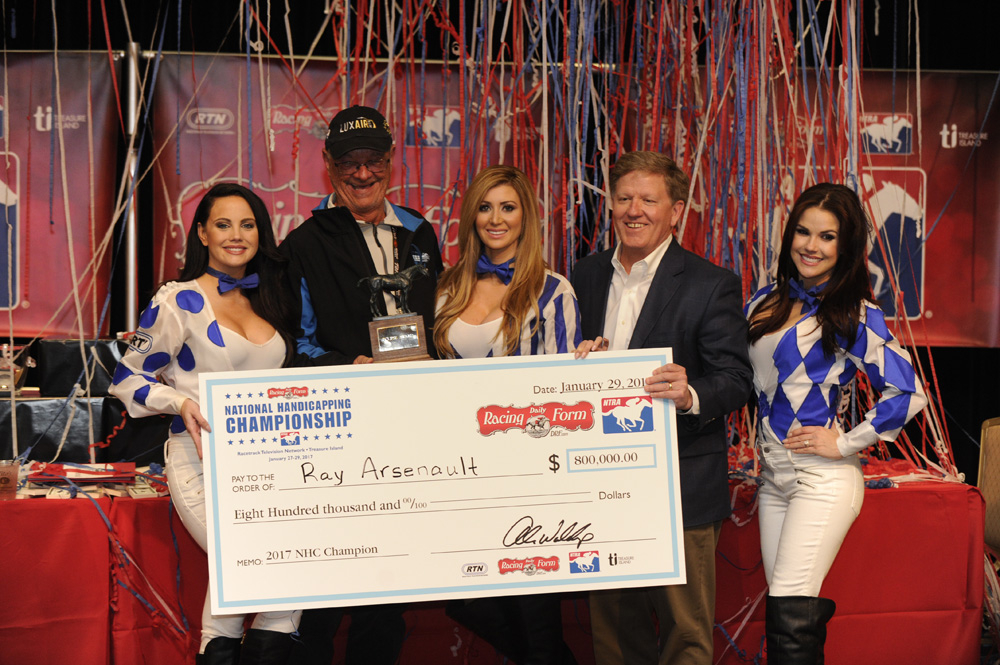 “I mostly compete in online handicapping tournaments,” says Alex DeVito, a 25-year-old competitor in a salmon-colored Vineyard Vines hoodie. DeVito is the youngest player in this year’s NHC. “I definitely don’t care about going to the track, but I like handicapping,” he says. “Online tournaments are great because they’re not played with real money. I don’t need to risk my bankroll.”

DeVito’s father, Basil DeVito, 62 and also competing, politely interrupts. “We’re going to have to make this quick,” he says to me. “Alex is currently in 60th place and the cutoff is 66. We’ve got two races to go to get Alex over the hump.” The senior DeVito, who is an executive at WWE (and the former president of the XFL), brushes off the idea that there are any similarities between horse racing and professional wrestling. “The only thing handicapping and pro wrestling have in common is intensity,” he says.

To qualify for a spot in the NHC, handicappers have to win tournaments at tracks across the country, or online. It’s no easy feat. Joe Scanio, a 53-year-old Brooklyn-based actor wearing a burgundy cable-knit sweater who once played a guest at the wedding of Johnny Sack’s daughter on The Sopranos compared the competition to landing a big role.

“You face so much rejection in the audition process as an actor,” Scanio says, “and you take a lot of losses as a horse handicapper. There are hundreds of qualified actors going for parts and there are hundreds of qualified handicappers trying to win this weekend. That said, out of the 600 handicappers here, 200 of them have zero chance. They’re first-timers, total amateurs. I could teach a lot of these guys how to get an edge, but I’m not about to hang a sign that says, ‘Come here to learn how to win.'”

As the NHC progresses, I continue to pump the horseplayers for winning tips. Tony Brice, a 60-year-old country music songwriter who wrote “I Don’t Drink About You Anymore” by 3 Ring Rodeo, says, “Creativity is key. The numbers are fuel for the imagination. It’s about looking at the numbers from past races and using them to imagine future races.” Stephen Diaz, 61, the master carpenter for New York City’s Metropolitan Opera, says, “The key to winning the NHC is knowing who to stay next to and who to stay away from. There are a lot of loud personalities here who can distract your focus.”

Bryan Wagner, 73, disagrees with Diaz’s sentiment. Wagner, who holds court like a John Grisham character, has competed in almost every NHC. His claim to fame is that, due to complicated line-of-succession politics, he was mayor of New Orleans for one day on three separate occasions between 1981 and 1987. “Go to poker tournaments,” Wagner says, “and you’ll find that people dislike each other. Here in the horse racing community, there’s an incredible camaraderie. There’s a lot of hollering, but I’m hollering for my friends to win as much as I am for myself.”

As the NHC’s second day winds down, Dan Kovalesky, the jovial Titanic-watching sales rep from Scottsdale, sits near the top of the leaderboard. He wears a red windbreaker and a giant grin as his opponents in the tournament stop by his table to shake his hand and deliver congratulatory backslaps. “Horse racing can seem intimidating as hell to get into,” he says. “Most people have parents or an aunt or uncle who introduce them to the sport. I got into it in college because my local track had a dollar beer night.” (The next day, the $800,000 first-place prize would go to Ray Arsenault, a 64-year-old Canadian. Kovalesky would win the $75,000 fifth-place prize.)

As I pester Kovalesky for handicapping tips (“Do your homework and listen to “At the Races,” Steve Byk’s daily Sirius show'” he offers) I watch the screens to see the last race of the day, at Santa Anita, a track east of Los Angeles. The room erupts with desperate screams (most of them men – only 24 women competed in this year’s NHC) as a horse named Bird Is the Word upsets Panama Papers. High-fives are exchanged between winners, and men rubbing their temples in agony are easily identified as the losers. I place myself in the latter category, having lost all eight races I bet on that day. Despite all the winning advice I received, there’s no such thing as easy money.