Muhammad Ali Was a Hero, But His Enemies Have a Legacy Too - Rolling Stone
×

When I was growing up, it was impossible to imagine anyone cooler than Muhammad Ali. He had the perfect looks of a rock star, was hilariously funny, and was beautiful to watch in the ring. My friends and I used to pop in tapes of his fights and double over laughing watching his opponents flail about in search of that infuriatingly pretty face of his.

As is the case with many people who are reflecting on Ali’s legacy right now, Ali for me later in life also defined what it meant to stand on a principle. The story of how he defied the government and risked jail because he refused to kill on command was easy even for a young person to understand.

So I was saddened to hear of his death earlier this weekend. It’s unlikely we’ll ever see anyone like Ali again, and not just because he was a billions-to-one marvel of physical and mental gifts.

It’s also because his enemies learned from the mistake they made, and spent a generation making sure that the next of his ilk, in the unlikely event that he or she ever comes along, won’t become so powerful a dissenting influence.

Ali was famously a person who could make a stage out of anything. Even his weigh-ins turned into acts worthy of Carnegie Hall. But on April 28, 1967, the U.S. government handed him the biggest stage of his life.

At an armed forces examining station in Houston, he refused to step forward to a white line when his name was called. That one step would have signified his willingness to be drafted.

The awesome drama of that moment made Ali hated at the time, but also turned him into a martyr to history. The symbolism of a man who made his living fighting refusing to fight was extraordinarily powerful.

Ali furthermore brilliantly used the moment to link America’s bloody quagmire overseas to the domestic warfare that had broken out in places like Watts, Rochester, Newark, Cleveland, Detroit, and Division Street, Chicago.

“My conscience won’t let me shoot my brother or some darker people,” Ali said. “And shoot them for what? They never called me nigger.”

Asking Ali to step forward that day in Houston was an epic strategic blunder. The last thing Lyndon Johnson or his successor Richard Nixon needed was to have Americans of any age, but particularly young people, making a connection between racism at home and wars of colonial domination abroad.

But by demanding that a man as prideful and magnetic as Ali submit to becoming a cheerleader for the bloodshed in Vietnam, that’s exactly what they did.

Even stripped of his title, Ali had enormous influence. He grew up in the dawn of the television age, for which his outsized personality was perfectly suited. He was one of the first people to understand the power of celebrity in the mass-media age, and became one of the first truly international media icons, more famous than JFK, Elvis, Khrushchev or the pope. 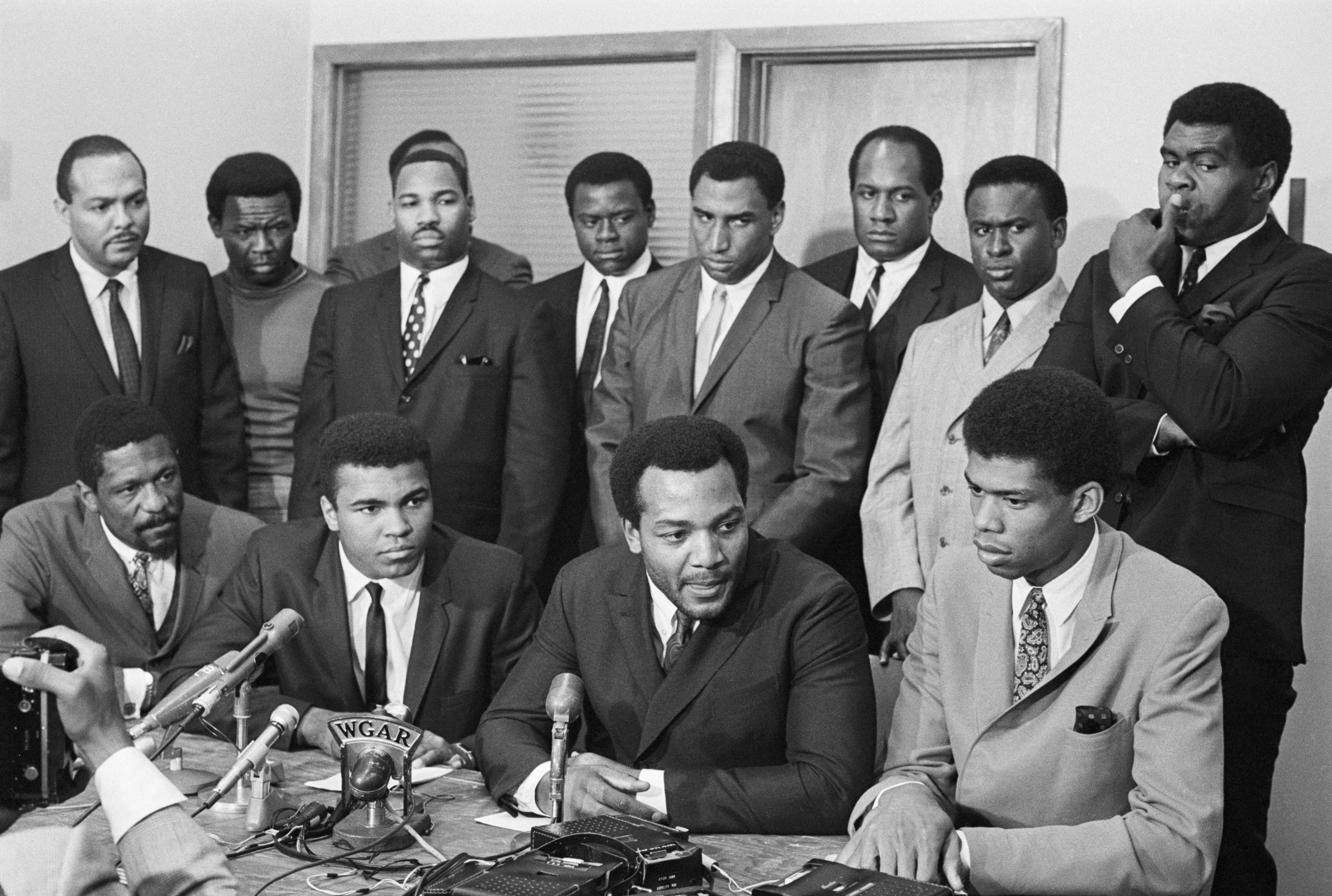 King, incidentally, had pivoted toward criticism of the war right around the same time that Ali was refusing induction. He gave a speech in 1967 called “Beyond Vietnam” that made a lot of the same points Ali did.

“We were taking the black young men who had been crippled by our society,” King said at Riverside Church in New York on April 4th of that year, “and sending them 8,000 miles away to guarantee liberties in Southeast Asia which they had not found in southwest Georgia and East Harlem.”

A year after that, unrest over the war essentially cost Lyndon Johnson his presidency. Abroad, the Tet Offensive sent American troops reeling toward a crushing defeat.

And later on, media efforts like the horrific “running girl” photo and the documentary Hearts and Minds helped confirm in the minds of large numbers of Americans a previously unthinkable idea: that the United States, savior of the world in the war against Nazism, was now the bad guy in the movie, a villain state that had murdered hundreds of thousands or even millions of poor civilian farmers for the sake of — what exactly?

The lesson the government should have learned from this disastrous episode was not to try to project power and influence by military occupation. Instead, the Pentagon saw Vietnam as a public relations failure. What military leaders thought they learned from the Indochinese fiasco is that wars are won on the airwaves as much as on the battlefield.

It’s not a terribly well-advertised fact, but the Pentagon has the single largest public relations budget in the world, annually spending billions to make sure that what happened in the Sixties does not happen again.

It’s being said a lot in the wake of Ali’s death that his counterparts today would never make the sacrifices he made. “Today’s transcendent athletes are too busy protecting their bank statements to make a political statement,” is how Christopher Gasper of the Boston Globe put it.

That might be true, but it’s also true that today’s athletes haven’t been asked to do what Ali was asked to do. Nobody is asking LeBron James to step forward to any white line. Nobody tried to draft Randy Moss or Albert Pujols to fight in Iraq. Who knows what might have happened if someone had?

The government eliminated that variable decades ago. In 1971, just as a comebacking Ali was preparing for the “fight of the century” against Joe Frazier, Richard Nixon signed a new selective service law that led to the end of the draft and the volunteer army. No more Ivy Leaguers or mouthy celebrities would be sent off to fight. It would be mostly poor kids from farms and inner cities on the front lines from now on. 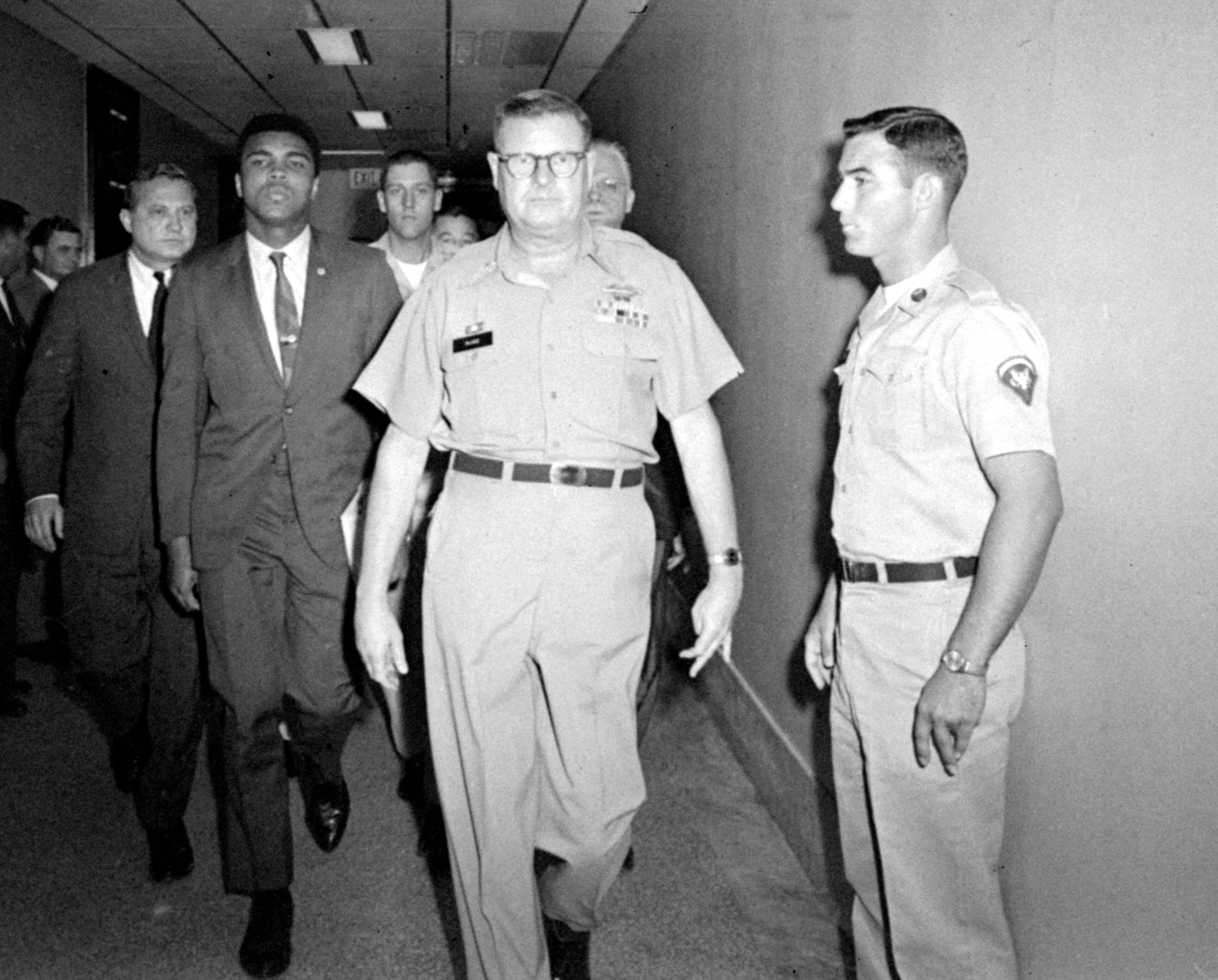 Later on, the military instituted a series of new rules governing the behavior of the press in war zones, of which the ban on photographing military coffins was only the most famous. The Pentagon tightly controlled the imagery that was sent home, making sure that our living rooms weren’t filled with footage of young Americans, to say nothing of foreign civilians, being shot and mutilated.

The all-volunteer army, coupled with the new media rules, allowed America to go to war in Iraq without the same level of virulent dissent it felt during Vietnam. One of the particular successes of the new PR strategy was the near-total lack of outrage or empathy over the deaths of Iraqi civilians.

Muhammad Ali in the Sixties easily penetrated Pentagon propaganda about the enemy in the jungle by pointing out that he personally had no quarrel with the Vietnamese. He forced Americans to think about the moral consequences of killing other human beings half a world away who really had nothing to do with us, until we started herding them into “strategic hamlets.”

But a generation later, we Americans mostly lack the instinct to even ponder those questions. We sit through movies like American Sniper that tell us that Iraqis are villains because they shoot at our soldiers. The question of why we were ever there in the first place to shoot or be shot at is not talked about as much.

In large part that’s because the government has successfully sanitized the use of force. The brutality and ugliness of war is mostly kept separate from pop culture. Wars look like video games to young people today. This isn’t an accident. It’s the result of billions of dollars of research and propaganda devoted to the problem of preventing the wholesale attacks of conscience that broke out during the Sixties.

Ali wasn’t a perfect person. His cruel treatment of Joe Frazier in the runup to their three epic fights is a particular stain on his legacy. That Ali himself came to understand this only slightly diminishes the fact.

But he was still a hero, flaws and all. He would have been larger than life anyway, but his defiant stand against his own government amplified his legend as a fighter of bottomless will and courage, and made him a towering figure in our history.

When he’s laid to rest later this week, most people will remember how much he was beloved for those qualities. But let’s not forget that not everyone loved him, or found him and his defiance so charming. His detractors have a legacy as well, one that sadly enough might outlast his.

We remember Muhammad Ali in his own words of wisdom and bravado. Watch here.