Mayweather Vs McGregor: Why We Couldn't Stop Watching - Rolling Stone
×
×

On Saturday, Conor McGregor and Floyd McGregor stepped into the ring the at T-Mobile Arena in Las Vegas, and in just under 30 minutes of fighting, the longest, most profitable dick-measuring contest of all time – presidential campaigns aside – came to pass.

The pay-per-view audience – which paid $99.95 to witness the spectacle – wasn’t comprised merely of fight fans, or even sports fans, but the whole lot of us: the modern-day cultural consumer, who without-fail has tuned in to each hoary exhibit that has exploded on their social media timelines in the past year. The promoters of Mayweather-McGregor apparently took notice, putting together the MayMac World Tour, a series of press conferences and appearances wrought with trash talk and racially inflammatory language. You could be forgiven for believing then, that in the era of Trump, we’re singularly attracted to the loudest, most abrasive, most violent displays.

Mayweather Stops McGregor in Round 10

Sure, the same people who followed the rally-turned-riot in Charlottesville, or haven’t been able to turn the dial away from Donald Trump in the past 18 months, tuned in for the fight. But they’re also the same ones who, last week, stared up into the sky to spot the blotted sun and on Sunday night, were glued to their couch for the Game of Thrones season finale.

The voyeuristic appeal of watching two men slug it out to the point of near-unconsciousness is not to be understated, but the UFC cashed out on that just as much as it did this generation’s pervasive fear of missing out.

In fact, the fight game in uniquely positioned as the perfect vessel to capitalize on this phenomenon. Not only is it easier to pick up on than other sports, but the UFC/boxing brass has mastered the art of marinating the maximum possible emotional resonance into its experience in the short period of a social media news cycle. They don’t have to sell a whole team, or a city, or a complicated vision. They merely have to sell one professional athlete. One celebrity.

And these days, it’s incredibly easy to tell people what kind of celebrity you are. There are various pre-packaged models, and everyone is a type, compartmentalized into different sections. At best, one can be a fusion of two or three types. As content consumers, we’re so familiar with these categories – the quirky comedic actress, the megalomaniac artist, the no-holds-barred purposefully offensive comedian, the Miles Teller in Whiplash professional athlete – that we can take note of its signals and immediately identify which side of a cultural feud we belong on. We can decide immediately who the hero is, who the villain is. It’s why headlines like “Tina Fey’s monologue on SNL was EVERYTHING” exist in duality with “Tina Fey’s monologue on SNL was the WORST”; why a sportswriter can say “LeBron has proven he’s more Muhammad Ali than Michael Jordan” and we immediately understand what that means. Is Beyoncé the feminist hero we need? How we answer that question says far less about Beyoncé than it does about ourselves, and our belief that the celebrities we decide to like define us in some inextricable way. It doesn’t take much to relate to these people on a visceral level.

The fighting world didn’t create this conditions, to be sure, but they’ve learned how best to use them.

Which might be why race, the most contentious issue in America, was reaped for all its commercial benefits. The “great white hope” narrative is as old as boxing, and in the current political environment, it was bound to come back with a vengeance in this match-up. McGregor played no small part in helping it along, imploring Mayweather to “dance for me” and calling him “boy” on more than one occasion, instances that went viral each time. Virality itself, as with all controversy, became part of the coverage. Every time the media denounced McGregor’s racist taunts, his audience picked up another disgruntled dude with a serious bone to pick with the “liberal media” and “political correctness.” 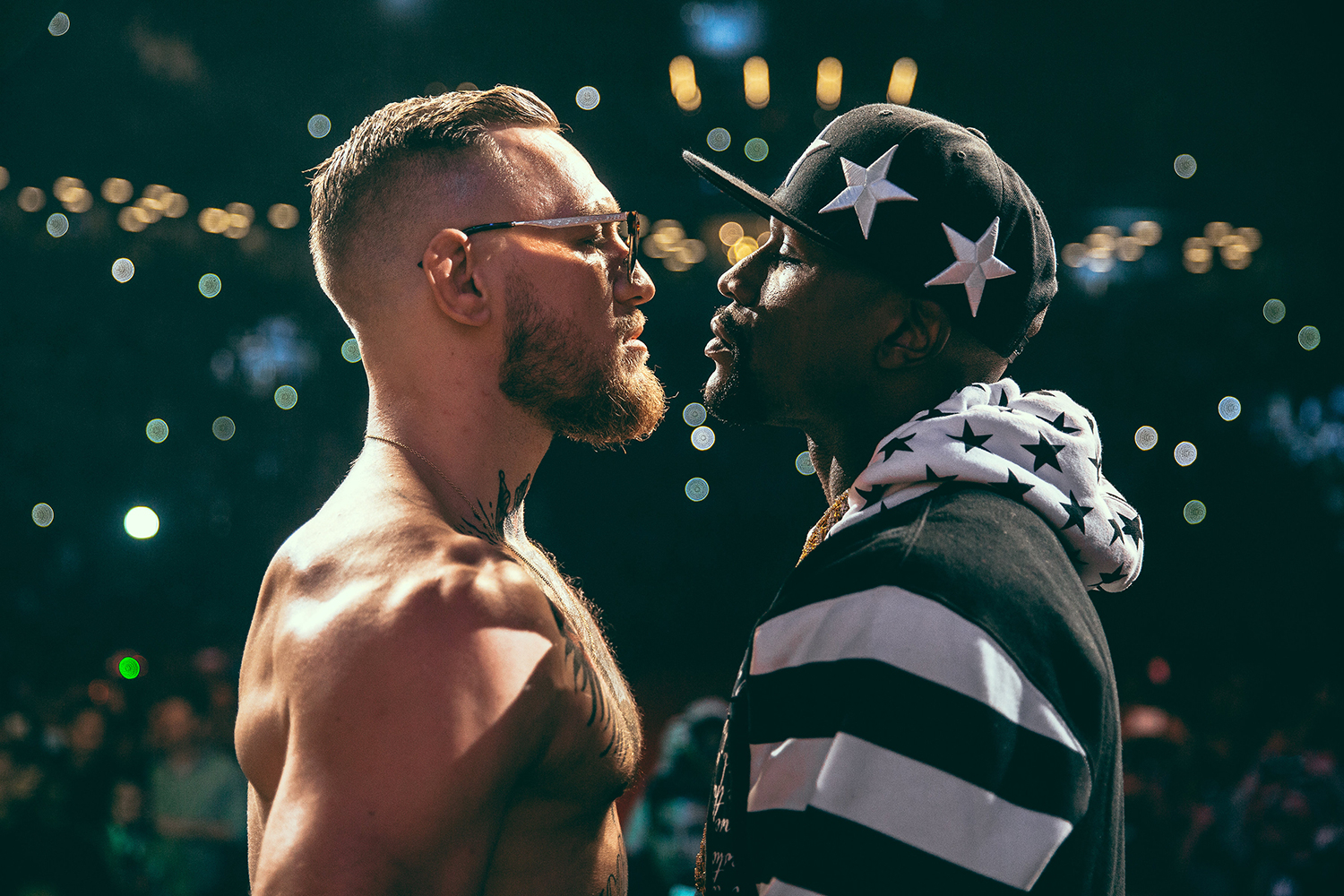 In 2017, to take part in the the lead-up to any major sporting event is to be embroiled in a culture war. The Super Bowl wasn’t about the Patriots vs. Falcons as much as it was white vs. black, Trump vs. the culture, etc. David vs. Goliath is not enough of a selling feature anymore. In fact, McGregor was such a big underdog that legitimizing the event meant playing away from, not into, the underdog factor.

The point is, virtually everyone with an Internet connection could find a vessel to connect the fight to something larger than itself, an issue they specifically were invested in.

So maybe you cheered for Mayweather because you’re anti-racist. Or you’re encapsulated by Floyd’s dominance, the idea of watching one the great’s put the perfect capper on his career. Maybe you picked McGregor because you’re Irish. Maybe he’s the working-class hero you want so badly to see in yourself. Maybe you like his bluster – the mouthpiece in the three-piece. Maybe you’re anti-political correctness. Hell, maybe you’re a racist. Maybe you dislike both, but you’ll take casual racism over violent misogyny. Maybe you just liked the connectedness of knowing you were, in an increasingly fragmented culture, doing the same thing as everyone else. Maybe you know it’s all a sham, but you still want to be able to tweet about it. Maybe all you want to do it tweet about how it’s a sham. You still watched.

And that’s the real kicker. As overexposed as we were this year to the Superbowl, the Oscars, the solar eclipse, the Charlottesville riots, the specter of Trump, they at least contained legible depth: an unpredictable outcome, a once-in-a-lifetime natural occurrence, honest-to-God life-or-death stakes. Saturday’s fight, however, was a match so devoid of actual suspense, with so inevitable an outcome, that it translated far less as a sporting event than it did a cultural event.

It was the most epic money grab of all time, and most of us knew it. We mentioned that every so often, in-between the pre-fight introduction videos we paid fervent attention to. Therein lies the inherent genius – and cynicism – of the Mayweather vs. McGregor. Its promoters understood that, in this particular moment, with big enough names and played-up stakes, they could strike gold on leveraging the fear of missing out, even in the face of a consumer base that acknowledged there wouldn’t be much to miss out on in the first place.