'Madden' and Me: How Football's Biggest Video Game Took Over My Life - Rolling Stone
×
×

A few years ago, in what is either one of the most significant or pathetic accomplishments of my adult life, I became one of the world’s best players of Madden NFL on the Xbox. I know this because Madden, a monstrously popular video game that has sold more than 100 million copies in its 27-year history, features a “leader board” on which the game’s nearly 2 million online players can see where they rank in comparison to the competition. A devilish feature, this. For a thirtysomething adult with a Type A personality and some unaddressed life issues — i.e., me — it transforms Madden from an escapist pastime into another stage on which to prove your self-worth. By the release of Madden ’10, in 2009, I was consistently ranked in the top 100 players online, and by Madden ’13, I was a regular presence in the top 10. Unlike an actual NFL player, I can look back on my triumphs with brain and joints intact; yet some part of me will forever be lost, recovering from the psychological toll sustained on a pixelated field.

Russell Wilson: The Chosen One

“Some guys get pretty crazy with the online play,” Kolbe Launchbaugh, one of Madden‘s creative directors, tells me when I ask him about the engrossing online gaming subculture that he is partially responsible for creating — one that has evolved over the years into an ancillary, yearlong “season” that its most hardcore participants take as seriously as that of the real NFL. Estimating that hundreds of millions of online matches are played yearly, Launchbaugh adds, “We have guys on here who play enough games to occupy two full-time jobs.”

He is, unknowingly, describing what happened to me when I decided to wade into the peculiar and turbulent waters of online gaming. At first, all I did was lose my Madden matches, which unfold a bit like games of chess, albeit ones requiring the mental acuity of Peyton Manning and the hand-eye wizardry of David Blaine. An adult with a healthier disposition would have stopped playing after a few attempts, but my deeply entrenched distaste for losing and my manic fixation on winning are among my most dominant personality traits — far more crucial to any success I’ve had as a writer, for instance, than that ephemeral thing referred to as “talent.” All of which is to say: I played and played (and played and played) until I could hold my own. I got decent, able to “read” and react to defensive schemes I’d long failed to understand while merely watching NFL games. Then I got good. Then something grim happened: Madden overtook my life.

During these years, if you saw me out in New York, you would have encountered a well-dressed, sophisticated-enough writer type, a regular at book parties, fluent in the language of art galleries and small-plates restaurants. I dated three wonderful women. I had an agent, a deal for a second book, some projects germinating in Hollywood. But if you installed a hidden camera in my apartment, you would have seen the feral-eyed maniac known to fellow Madden junkies by the gamer tag “brooklyn1979.” After trying to squeeze in a productive hour or two of writing in the mornings, I’d make the shame-inducing transition to my Danish modern couch, where I’d often remain for the rest of the day, inhaling a pack of cigarettes while playing ranked games of Madden and rising only to punch holes in the plaster walls of my well-appointed home. Though I never entered the high-octane universe of tournament play or the shadow world where games are played for money in quasi-legal betting forums, my dedication to climbing the leader board quickly verged on the diabolical. At my peak (or, looking back, my nadir), I was playing about 2,000 online games a year, which, at an average of 40 minutes per game, meant that I was spending about two full months a year playing Madden. Because I made the mistake of including my birth year in my gamer tag, many of my foes took to berating me as a “30 year old welfare virgin living in momma’s basement,” to quote one emblematic dig. Once, when I tried to explain that I was in fact “a writer of books who lives alone in Brooklyn,” my opponent, who described himself as “a 15 yr old who gets mad hoes,” was ready with a comeback: “Brooklyn and books are stupid.” That I was genuinely offended goes a long way toward explaining just how important validation in Madden‘s online community had become.

Me: You know hoes are garden tools?

Him: Damn you really ARE stupid!

Keeping the world of David Amsden, urbane writer, separate from that of brooklyn1979, merciless Madden star, became an exceedingly difficult tightrope walk. I struggled to focus on calls with editors, for instance, because while on the phone I’d be trying to stop the crossing pattern of one of my regular sparring partners on the virtual NFL gridiron. Hell, in a darkly surreal moment, I once conducted a long interview with Tom Brady while — wait for it — playing against the Patriots in Madden. My output as a writer, needless to say, suffered: The second book went unwritten, and the movie work dried up, which only infused my mission to climb Madden‘s leader board with a misguided sense of urgency. And much as I tried to keep my romantic relationships insulated from my Madden obsession, the game found ways to seep in. My girlfriend would take a shower, only to emerge to find me sneaking a match, screaming vulgarities into my headset (“Lil’ bitch, I’m-a cut you down if you keep tryin’ that bullshit!”), which is not a sight that a woman who believes herself to be dating a cultured writer in New York finds remotely seductive. I started thinking of people I knew only by their gamer tags with as much reality as I did the three-dimensional people in my life, who I was seeing less and less. A few years ago, in an attempt to rationalize my habit, I persuaded another publication to commission an essay not unlike this one. But it never got written. I chose, instead, to just play Madden. 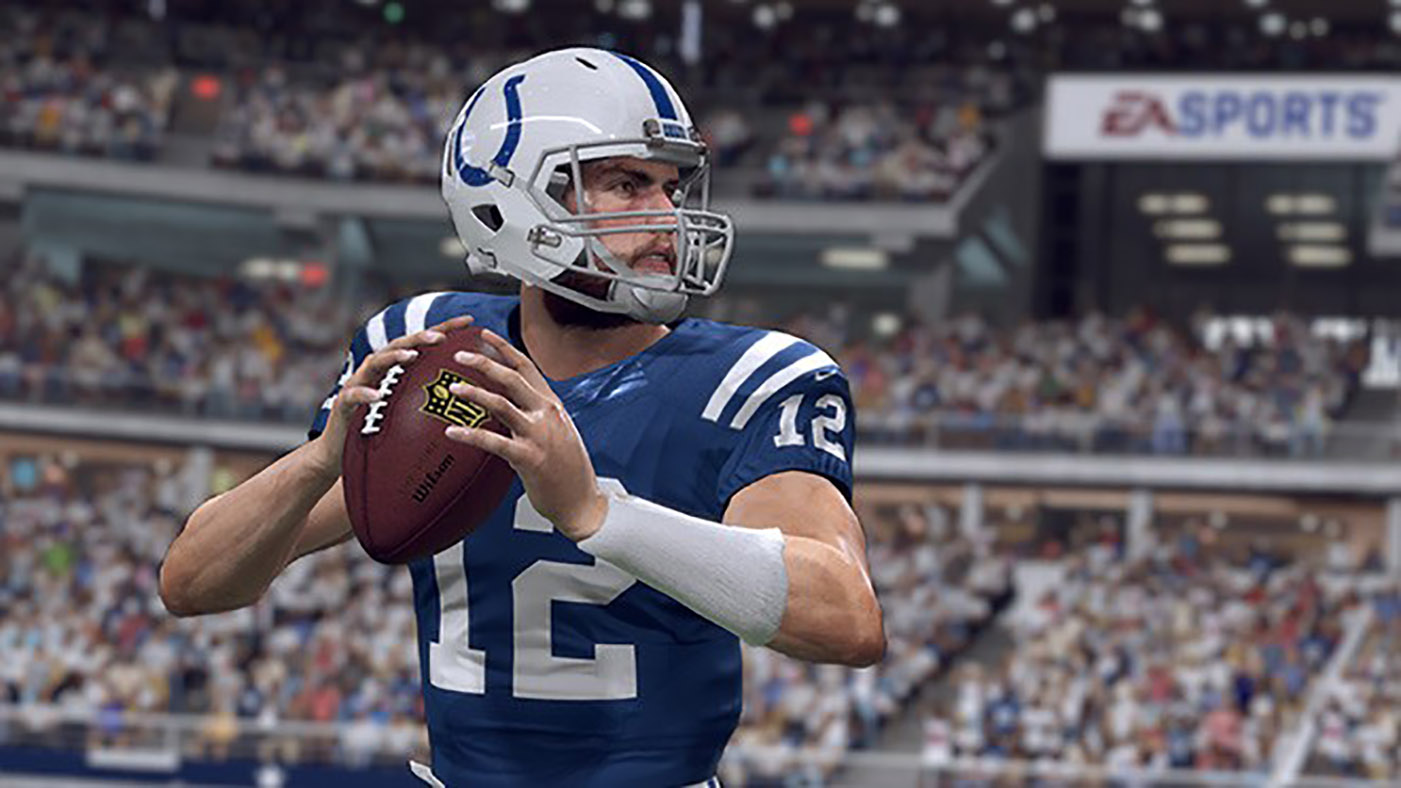 In a particularly embarrassing highlight from this low point in my life, I got into a heated postgame spat with a player I had just beaten. This was not uncommon. As brooklyn1979, I would sit with a computer next to me while I played, logged in to my Xbox account, the better to allow me to send antagonistic notes to players while our games were in progress. I had countless times gone so far as to falsely tell “glitchers” (those who relied on manipulating the game’s AI rather than playing “clean”) that I had traced their IP address to their actual home, and would be at their door shortly to “settle this in person.” Anyway, on this occasion my trash-talking exchange culminated with my opponent sending me the following threat: im gonna have kimbo slice shove his big black dick up ur ass and make it come out ur mouth u stupid fuck. Amused, I took a photo of the screen with my phone so I could e-mail it to a friend named Fred, one of the few people to whom I had confessed the depths of my Madden vertigo. The trouble is that, in my life as a journalist, I was also in the process of pursuing an interview with Tom Freston, one of the founders of MTV, about his life since being forced out as the CEO of Viacom, the multinational media giant encompassing CBS and Paramount. Typing “Fre” into my overly intelligent smartphone, however, triggered Freston’s e-mail over my friend Fred’s, and before I realized what was happening I sent one of the most powerful men in media a message informing him of “my” plan to enlist a mixed-martial-arts fighter to defile him in one of the most heinous and racially insensitive ways imaginable. (Mr. Freston, if you happen to be reading this, please accept my belated apology.)

During my call with Launchbaugh, I ask if he ever feels uneasy knowing that the game has this effect on people around the world. “There’s a little bit of guilt,” he says with a laugh. “But all in all, we love it! Our measure of success is how much we can keep people like you playing the game through the year.” Fair enough. One thing that becomes clear in our discussion is that someone with my habit is an extreme outlier in the Madden universe: one of a few dozen, not millions, which puts my “success” in less heroic perspective. Had I known this a few years earlier, who knows? Maybe I would have seen Madden for what it was: a way of regressing into childhood at the undeniable dawn of adulthood.

Stories of addiction tend to follow a certain arc: pleasure-seeking giving way to self-destruction, leading the protagonist to hit “rock bottom” before climbing out of the darkness. Mine does not fit so neatly into that narrative. As I talk to one of the game’s developers, hearing about the new features in this month’s release of Madden NFL ’16, I find myself itching to test-drive the game, reminded of one of the franchise’s singular attributes: the way it enhances an NFL fan’s understanding of the professional game, rendering the offensive and defensive schemes faced by actual NFL players comprehensible.

Thing is, I no longer have a gaming console. Two and a half years ago, the woman I loved left me. While the breakup had nothing to do with Madden, I’m sure my cause was not advanced by the fact that I had become more tuned in to completing sideline passes in Cover 2 than to her emotional needs. Thrown into a tailspin, I took a five-day trip to New Orleans and never left. I have no Xbox down here in the swamps, and as much as my chat with Madden‘s developer makes me momentarily reconsider buying one, I know where it can lead.