Step aside, Chuck Norris – there’s a new ultimate badass on the scene.

Wednesday night in Kansas City, Madison Bumgarner came on like a cross between Paul Bunyan, Clint Eastwood and Freddy Krueger, coolly dispatching the Kansas City Royals with frightening ease while lifting the San Francisco Giants onto his broad shoulders and carrying them to their third World Series championship in five years.

The man they call “MadBum” had some help, of course: Jeremy Affeldt, making his fourth appearance of the Fall Classic, earned the W by throwing two-and-a-third scoreless innings in relief of starter Tim Hudson, who couldn’t get out of the second inning. Rookie second baseman Joe Panik defused a third-inning Royals threat with a brilliant stop-and-shovel play that turned what looked like a sure Eric Hosmer single into a 4-6-3 twin killing. (Hosmer’s decision to slide headlong into first may have also contributed to his fate, as no less than Bill Nye, the Science Guy scolded via Twitter.)

Hunter “Crazy Legs” Pence rapped two singles (raising his batting average for the Series to .444) and scored a run on Brandon Crawford’s second-inning sacrifice fly. Pablo Sandoval put on a four-star Kung-Fu Panda performance, going three-for-three with a double (raising his average to .429), getting hit by a pitch, making at a spectacular belly flop into third, crossing the plate twice (thanks to designated hitter Michael Morse, who drove him in with a second-inning sac fly and a fourth-inning single) and catching Salvador Perez’s foul pop-up to seal the Giants’ 3-2 Game 7 victory – a play he punctuated with a celebratory pratfall that surely measured in the low 4s on the Richter Scale.

But ultimately – just as Giants fans hoped, and Royals fans feared – Game 7 was all about Bumgarner, who threw five scoreless relief innings to earn the save, the World Series MVP award and a place in the history books.

Pitching on just two days’ rest after throwing 117 pitches during his Game 5 shutout of the Royals, the 25 year-old lefty (who also pitched seven innings in the Giants’ 7-1 Game 1 victory) threw 68 more last night, striking out four batters and only allowing two hits while driving an icepick deep into the heart of Kansas City’s championship hopes. In doing so, he set the record for most innings pitched in a single postseason and joined the impressive ranks of Christy Mathewson, Waite Hoyt, Carl Hubbell, Harry Brecheen and Sandy Koufax, previously the only players to notch two or more wins in a World Series while pitching twenty-plus innings and posting an ERA of less than 0.50.

The Royals came into this World Series looking like fast and furious throwbacks to 1985, the last time a KC team went all the way. But they met their match in Bumgarner, a throwback to an even earlier era when country hardball was the name of the game, and the concept of pitch counts was as thoroughly alien as hair dryers in the locker room. “I wasn’t thinking about innings or pitch count,” he explained after the game. “I was just thinking about getting outs until I couldn’t get them anymore and we needed someone else.” No one else would be needed.

Bumgarner cast a long shadow over Game 7 well before the first pitch was even thrown. The rest of the Giants’ starting rotation had been woefully ineffective against the Royals (Jake Peavy’s meltdown in Game 6 being just the latest example), and few expected that Tim Hudson – who at 39 became the oldest pitcher to start a seventh game of the World Series – would last more than a few innings on Wednesday. But when Giants manager Bruce Bochy announced before the game that Bumgarner would be available to throw at least 40 pitches in Game 7, it immediately put the onus on the Royals’ bats to strike early and often against Hudson. While Kansas City did manage to touch Hudson for two runs in the second and send him packing, they were already in “catch up” mode thanks to their starter Jeremy Guthrie, who’d allowed two San Francisco runs in the top of the frame. And when the Giants re-took the lead off reliever Kelvin Herrera in the top of the fourth – this was the first Game 7 in history where neither starting pitcher lasted a full four innings – the specter of a Bumgarner appearance loomed progressively larger. 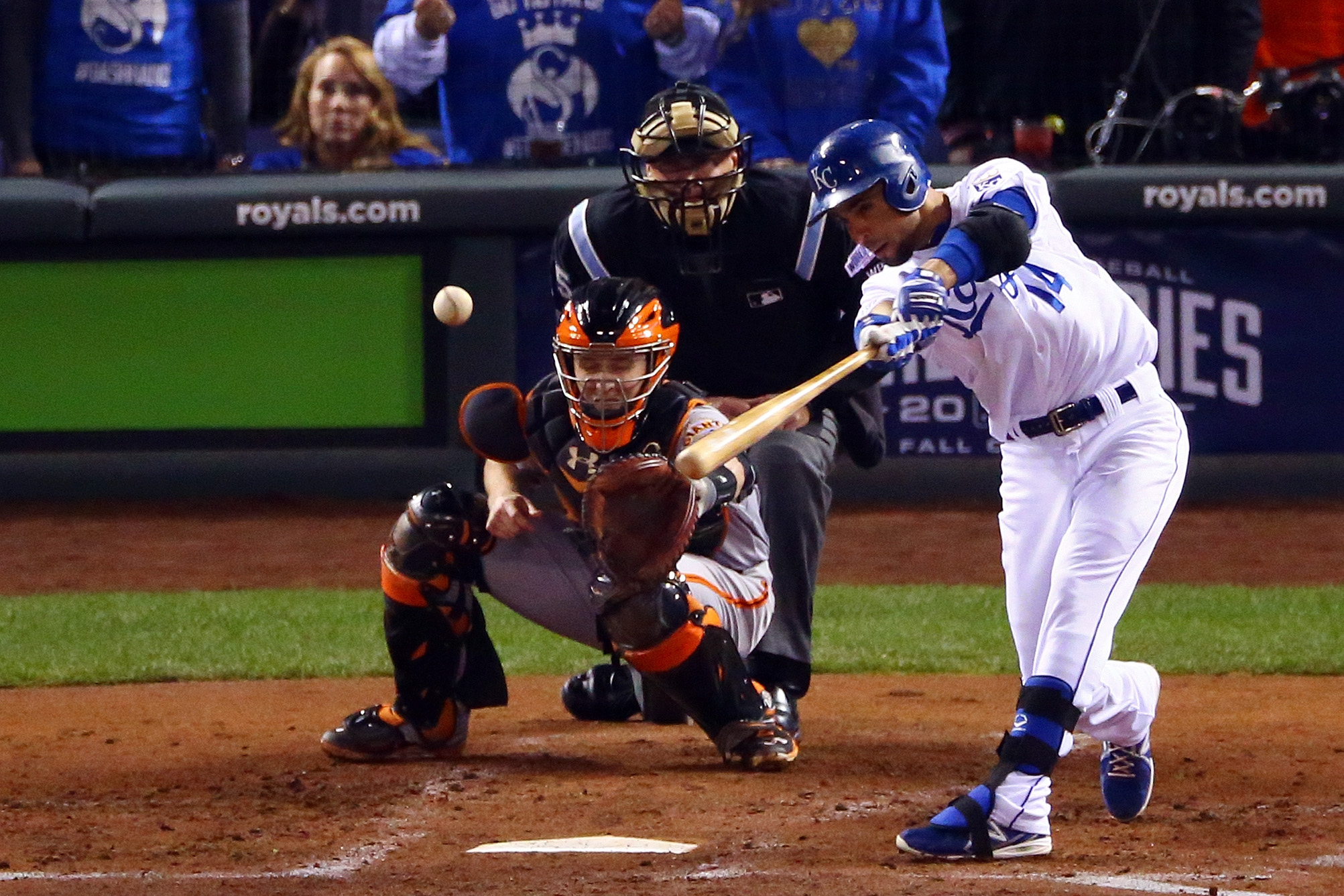 Bochy finally brought his ace in for the bottom of the fifth. The first batter he faced, Royals second baseman Omar Infante, made Bumgarner look almost mortal by lining a single to right. Alcides Escobar, Infante’s double play partner, then successfully dropped a two-strike sacrifice bunt, moving Infante to second. Royals manager Ned Yost would catch heat for willfully giving up an out in that situation, but the move might have paid off if Giants left fielder Juan Perez hadn’t made a beautiful snag of Nori Aoki’s fadeaway smash. Bumgarner then got Lorenzo Cain – arguably the Royals’ best hitter in the Series – to wave at some high cheese, and the inning was over.

While Bumgarner seemed to lock back into his dominant groove from there, the final four innings of Game 7 were also highlighted by masterful work from the Royals’ bullpen. Herrera, Wade Davis and Greg Holland allowed only three hits while striking out six, successfully keeping the Giants from adding to their lead; though the way Bumgarner was pitching, the Royals might as well have been down by ten. There was no activity at all in the Giants’ bullpen until the bottom of the ninth, when Gregor Blanco’s misplay of Alex Gordon’s two-out liner to left-center allowed Gordon to make it all the way to third, and triggered some warm-up tosses by Santiago Casilla.

Gordon’s hit (and Blanco’s error) set up a classic World Series scenario: Two outs in the bottom of the ninth of a one-run ballgame, the tying run ninety feet from home plate and Salvador Perez – the only Royals player to homer off Bumgarner in the Series – standing in against the Giants’ ace. For a moment there, it seemed like the Royals might have one more magical comeback left in them, but Bumgarner hadn’t come this far just to blow the lead and bolster the Royals’ Cinderella story. His battle with Perez seemed so distinctly one-sided that, when the Kansas City catcher popped out to the Panda, one was kind of impressed that he’d even managed to put some wood on the ball at all.

It was a fitting end to a wonderful World Series, a seven-game showdown between two evenly matched playoff underdogs that was far more tense and exciting than its detractors would have you believe. If the hype about a Giants “dynasty” is a tad specious – even-year-only championships do not a dynasty make – there’s no question that this is a remarkable franchise that has earned (rather than simply bought) its three rings, or that Bruce Bochy will one day have a plaque of his own in Cooperstown. There’s also no question that, without Madison Bumgarner’s utterly badass and awesomely historic performance, the Royals would be the ones celebrating right now.