Luan Oliveira is a skating survivor. Born in the favelas of Porto Alegre, Brazil, his parents gave him up just after birth, leaving him to be raised by his grandmother. He came of age in a cluster of shanty homes where violence was a way of life, and skateboarding was about as welcome as outsiders.

“Where I grew up, there were very young kids that carried around guns,” he says. “If anyone tried to get into our neighborhood, these kids would stop them at gunpoint and make sure they belonged.”

Still, at the age of nine, Oliveira received a small plastic board as a gift. It sat unused for months, until Oliveira caught a glimpse of someone shredding on a skateboard. Almost immediately, something clicked. Oliveira dusted off his board and spent each day practicing at a local concrete skate plaza. It didn’t take long before the young prodigy had amassed an arsenal of tricks, and began developing an extended family – of skateboarders.

Full of passion but penniless, Oliveira convinced his local skate shop to pay for his bus ticket and entry fee to compete in a street contest. He took second place in the competition, then sold his product prizes in order to pay for more bus tickets, contest fees and food. Oliveira’s skate life continued like this for several years. After each competition, he and his friends would skate all night at bus stations until the first bus arrived to take them back to Porto Alegre. Then in 2005, tragedy struck twice. Oliveira’s grandmother and his father passed away in the same week. Skateboarding became his one true family.

Oliveira continued to skate unremittingly in parks, plazas, contests and bus stops until one day a YouTube clip of his exploits found its way to Ben Powell from Sidewalk magazine, who forwarded it on to Geoff Rowley, pro skater and co-owner of Flip Skateboards. In 2007, Oliveira packed his bags and moved to the United States, where he gained worldwide attention by winning back-to-back Tampa Am contests in 2008 and 2009, and knocking out a mind-blowing video part in Flip’s Extremely Sorry. In 2010, Flip turned Oliveira pro. Since then, he’s won the Tampa Pro, took four medals at the X Games and joined Street League Skateboarding. This year, he’s ranked first in the Street League, heading into the SLS Super Crown Championship on October 4 in Chicago.

With all the hype surrounding this year’s competition, Rolling Stone spoke with Oliveira about his background in Brazil, his rise through the skating ranks and how he’s preparing for the biggest street-skating championship of his life.

What was your life like in Porto Alegre?
I used to wake up every morning at 7:00 a.m. and skate to IAPI skate park, which was 45 minutes away. I skated all day long and didn’t even eat sometimes, because I didn’t have money. But I could not stop skating. All I cared about was skating every damn day and getting better. Eventually, I convinced a shop to pay for my contest entries and bus tickets to São Paulo or Rio. That’s where most of the local contests happened. I would win the contests and then sell the products I won to pay for more bus rides and food. I did this for a long time. Then, my grandma passed away of cancer. It was really terrible for me. She was the only real family I had. I knew I had to get out of the ghetto and that skateboarding was how I was going to be able to leave.

You won the Tampa Pro this year, then crushed the last two Street League Skateboarding contests in Los Angeles and New Jersey, taking first in both. What do you credit your success to?
For my contest runs, I always try to put in a lot of tricks and try to be as different as possible. I always start with a trick that I’m confident in doing and then go from there. I used that strategy when I won in Los Angeles. But I didn’t have a strategy at the second stop in New Jersey. I was kind of lost on the course and had some trouble figuring it out. Like with the 360 flip noseslide bigspin out, I never tried that trick during practice. But I knew that I needed a really high-scoring trick at the end of the competition, so I went for it. And I landed it.

I always want to win. I always want to do my best. My agent Rafael and I have been working really hard for the past two years. I guess all the hard work paid off. It was so amazing. I couldn’t believe it. We celebrated after and it was great sharing those moments with my friends. 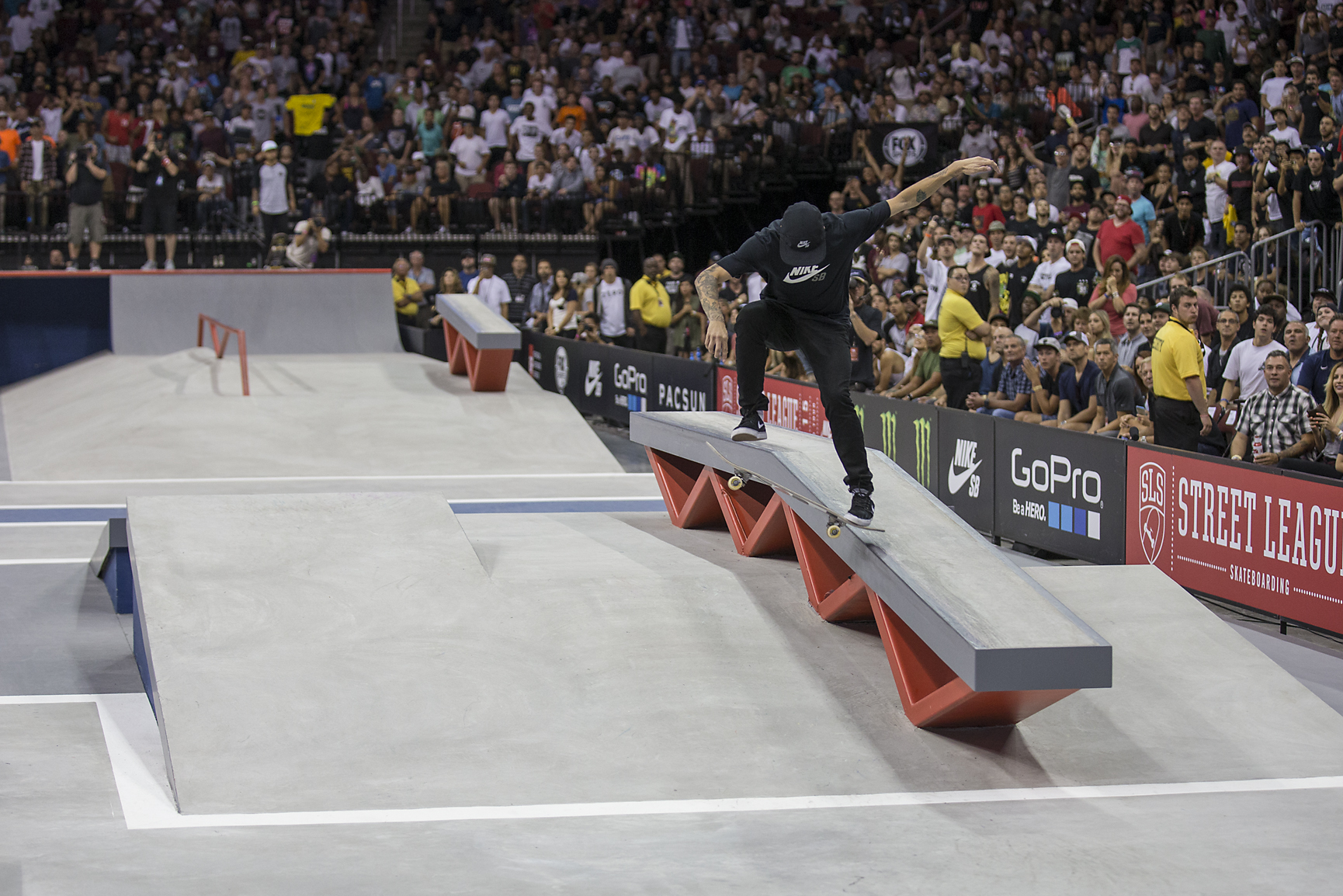 How important is it for you to win the Super Crown World Championship? Do you feel pressure going up against the reigning champ, Nyjah Huston?
For me it’s so important, especially now that I’ve been working really hard for it. I want it so bad. But I don’t feel any pressure from the other skaters. Yes, they are all gnarly and they each have the power to win the whole thing. But I’m not trying to be better than anyone else. I’m only trying to be better than myself.

You strike me as the kind of guy who does this for more than just championships and sponsorships –
My priorities always revolve around my relationship with skateboarding. Everything that I do in life has something to do with skateboarding. I thank skateboarding for everything in my life – for all of the friends that I have made, all of the places that I have been and all of the fans that are rooting for me. I never had a family. When I was born, my parents gave me to my grandmother and then they left. It’s hard not having a family to be supportive or tell me what to do. The world of skateboarding has become my family. Without it, I would probably still live in the ghetto or maybe I would be dead. I am so blessed to be able to travel and do what I love.

We recently interviewed Leticia Bufoni, and I know you two traveled to China to film for your video parts in PUSH. Did you first meet her in Brazil?
I’ve known Leticia for a very long time. I used to go to São Paulo and skate at a private park that she skated at every day. We met at the park and our friendship grew bigger and bigger over the years. We talk every day and skate together a lot. She is such a talented girl and inspires so many people, including myself. I have mad love for Leticia.

What are you currently working on?
Well, I just finished filming for PUSH and now I’m working on a Thrasher part that is going to come out later this year. It’s not easy to skate contests and film for a video part, because you’re constantly traveling and busy, but I’m working really hard and hopefully everybody likes it. I’m also building up my skate shop. Matriz Skate Shop was one of my first sponsors. They helped make me who I am today. And now I own a Matriz shop in Brazil. When we all started working together, it was a dream of mine to one day own a skate shop – and that dream has come true. I am so grateful for that. Over the next ten years, I plan to open ten skate shops.

This is kind of random, but I heard a funny story about you shitting in Ben Nordberg’s pillow. What was that all about?
Yes, I did it. It was a long time ago on a skate tour, when Ben first joined the Flip team. We decided to do something crazy to welcome him to the team. At first, we dumped a bucket of ice on him, but it wasn’t that funny. So then we got him to leave his hotel room and I snuck in there and took a shit in his pillowcase. Twice. And then I put it back on his bed. He couldn’t sleep all night because his room smelled like shit, but he didn’t realize it was in his pillow, under his head all night. You’re welcome, Ben!

Did Ben ever retaliate?
No, nothing has happened yet, thank God! Don’t give him any ideas.