Leticia Bufoni on the Perils of Skating Naked - Rolling Stone
×
×

When Leticia Bufoni was 14, she came to California to compete in the X Games. Her father traveled with her from Brazil, and though she dreamed of staying in the United States, he had other ideas. Bufoni came in last place, but pleaded with her dad to let her remain in L.A. and pursue her dreams of becoming a pro skater. He eventually gave her his blessing. It was the last time she’d ever ask for permission to do anything.

Two years later, Bufoni took first place – and the $25,000 prize that came with it – in the Maloof Money Cup, and she was rolling. Since then, she’s done things her way, and become a sensation in the process, winning X Games golds, coming in third (the highest of any skater) on ESPN’s Top 50 Women in Action Sports countdown and signing with NIKE SB in 2014. Her reputation as one of the most technically skilled skaters on the planet has earned her playable-character status in Tony Hawk’s Pro Skater 5, and made her the first female skater to appear on the cover of The Skateboard Mag. And of course, there are the non-skating photo shoots.

Last year, she dropped jaws with a scantily clad spread in the Brazilian edition of Men’s Health, and earlier this summer, Bufoni went all the way, posing nude for ESPN The Magazine‘s Body Issue. “I was really scared when they asked me to do it,” she confesses. “I didn’t know if people were going to like it. There are so many haters in skateboarding.”

On a recent visit to her Hollywood, California residence, Leticia spoke to Rolling Stone about getting undressed for the camera, dedicating her life to adrenaline-fueled adventure and leaving skin on the concrete for her role in PUSH, a documentary series featuring eight of the most talented and distinct skateboarders in the world.

So you’ve lived on your own in California since you were 14?
Yeah, I came to California with my dad in 2007 to skate in the X Games. I didn’t win, but I knew if I stayed in Los Angeles and kept skating, that I would eventually. There is so much more for me to do here in skateboarding than in Brazil. During that trip, we were filming at Element Skate Camp. I was working so hard on a trick and then my dad said, “If you land this trick, I will let you stay here.” I landed it the next try. I had friends here to stay with, who my dad knew and trusted. So I wasn’t completely alone. But I was super young, and had my own place and my own bills to pay.

I enrolled at Hollywood High School, but I missed so much school they told me I was going to be kicked out, so I just left. Skateboarding was my job and I had to miss school. I couldn’t go every day. I was traveling a lot, filming a lot and skating every day. My dad put it like this, “When you are 40 years old, you can go to school. But you probably can’t skate when you are 40. So enjoy the moment, do your best now, and go back to school later if you ever need to.”

Has your family always been supportive of your career?
No way. My dad is very traditional, and was very strict when I was little. He didn’t like that I was into skateboarding. I dressed like a boy and skated with boys as well. A lot of kids would tease me and call me lesbian and tomboy. My dad became so embarrassed and angry that he broke my skateboard. But the next day, I built another board. That’s when he realized he couldn’t stop me from skating.

There was a big skate contest in Sao Paulo. My dad’s friends convinced him to take me to the contest. It was my first competition and I practiced so hard to show my dad that I could skate. I won first place. But more importantly, my dad saw the positivity and support of the skating community. After that, he traveled with me everywhere and helped me become the person I am today. 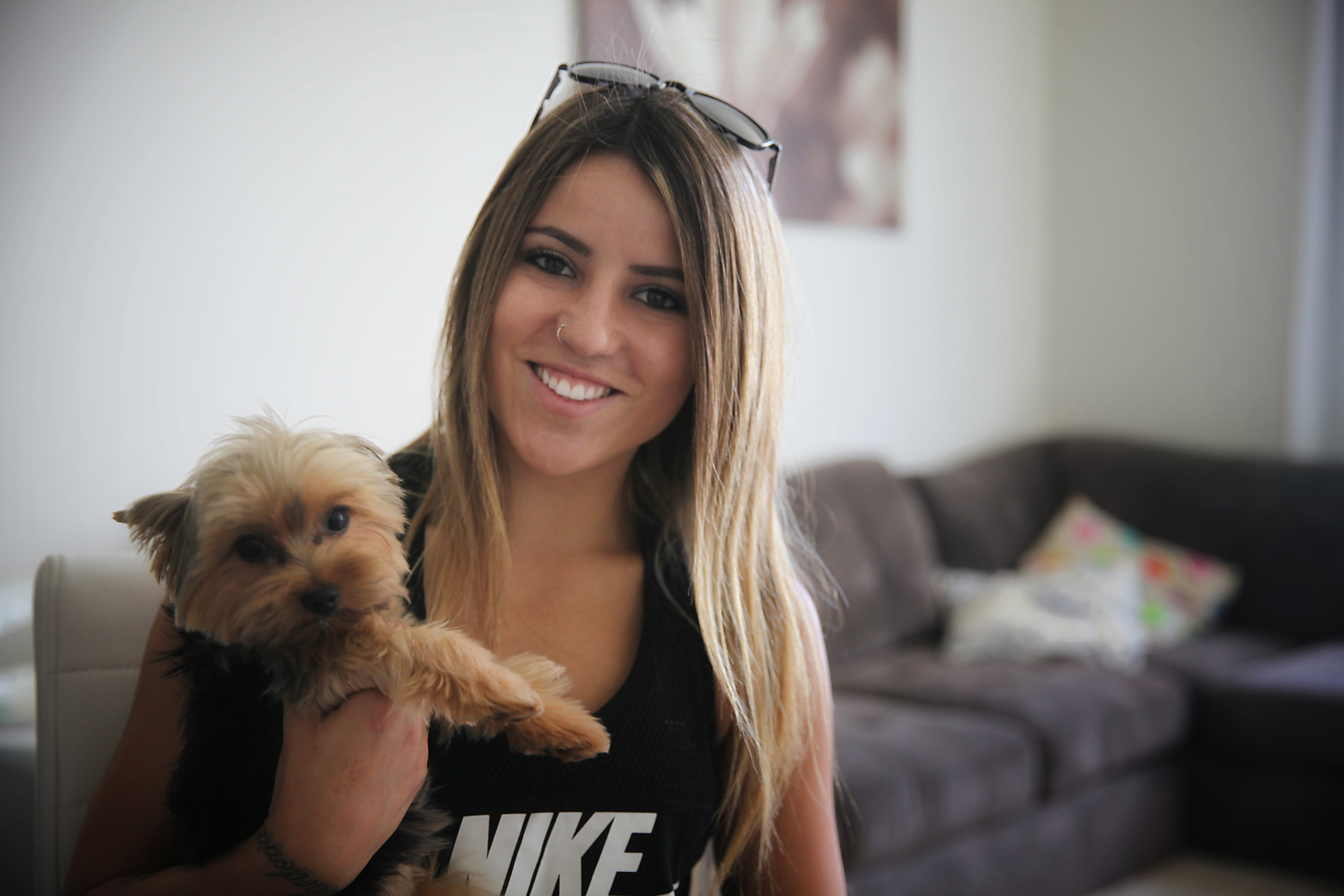 You recently posed nude for ESPN. What was that experience like?
ESPN approached us last year, asking me to pose naked for the Body Issue. I love the concept. At first, you think the photos come off as sexy. But it’s really about what each sport does to the body of a top athlete. It still took me a couple of months to decide if I should do it. I talked about it with my family, managers and sponsors before I decided to go for it. It was a huge honor to appear with so many of the world’s top athletes.

We tried to shoot something while I was doing a trick on my board. But skateboarding is hard to show naked because when you’re doing a trick, your legs are wide open and they can’t show that. They brought in a quarter pipe and I was doing back disasters when I still had my clothes on. Then I got naked, tried it again and I ate shit. I fell super hard and scraped my back and shoulders. I was fine, but I guess they weren’t used to seeing someone slam like that, so they changed the setting to show me jumping on a trampoline with my board in my hands.

What kind of trouble do you get into when you’re not out skateboarding?
That’s funny you say that. I just got a tattoo on my hand that says “trouble.” I was traveling in Barcelona and Prague, to film and skate a couple of contests. When I got home, I went with my girlfriends to Las Vegas for a week. We went to pool parties, played blackjack, got tattoos and raced Ferraris on a track. It was super fun and I won the race. I really needed a break because I was super sore and tired.

I like to be scared and do scary things. I love skydiving. A couple years ago I was in Brazil to shoot a video for GoPro. It was a tandem jump with a skydiving instructor. After that I wanted to jump by myself. It’s hard to describe the feeling – it’s the best. I got my license a year and a half ago. I have my own parachute and all my gear. Now, we go all the time. I jump with Bob [Burnquist] a lot.

What drives you to get out there and skate with the boys?
I love skating. It shouldn’t be about boys or girls; it should just be about having fun and becoming your best. I grew up watching boys and girls skating, like Corey Duffel and Elissa Steamer. I love both of them the same. It’s definitely getting better. There are a lot more opportunities for girls today in skating than even when I started out. NIKE SB is considering putting out a women’s line for the first time.

But some things still have to change. I don’t have a board sponsor because most of the big skateboard companies will not sponsor girls. Some of the big brands we met with actually told us that they don’t want any girls on their skate teams. It’s hard, because I can only get a “flow” sponsorship, which means I ride in exchange for free boards, while the company makes money using my name. I’m not doing that. I would rather ride for myself. I have my own blank boards with my own future company called Yeah Yeah Skateboards. Paul Schmitt makes my boards and they are perfect.

Dew Tour just premiered the film PUSH, documenting all the travel and work you put into filming a video part. In one episode, you went to a Chinese doctor and received a fire and bloodletting treatment for your injured ankle. Did it help?
It’s been so hard to film for my part, because I’ve had to travel for other things, and I injured myself a few times. But skateboarders are injured all the time. We are used to it. I filmed as much as I could and I did get a really nice line in Barcelona – ollie up a bank, kickflip down and then board slide down a 14 rail. I ate shit a few times trying to get it. I was under a lot of pressure to film for this part. But I’m really happy with how it came out.

In China, I was trying to 180 down a set of 15 stairs. I hurt my ankle really bad on one of the tries, so we went to a Chinese doctor. When I’m hurt, I’ll do anything to try to get back on my board. He put fire to my ankle and it burned really bad. I tried to tell him to stop but we didn’t speak the same language. Then, he used a really big needle to drain blood from my ankle. That really hurt and it didn’t help. After waiting a couple days to see if it would get better, I flew home to do interviews and photo shoots for six weeks until I could skate again.

It seems like one of the greatest challenges of a professional skateboarder is simply staying healthy.
That’s so true. A few months after I signed with NIKE SB, I went out to film with the team. On the first day of filming, I was crooked-grinding a rail in Los Angeles and I broke three bones in my foot. I’ve also had surgery for a torn ankle ligament. My life has been filled with heel bruises, cuts and scrapes. I cut the muscle in my hip while filming something for The Berrics. One time, my dad made me drop in on a vert ramp and I went straight down to the flat and broke my nose. I get hurt all the time, especially while filming for video parts. But I’m used to it. That’s skateboarding. It hurts a lot.

Aside from getting injured, what’s next for you?
I just filmed a lifestyle television series for Brazil called Leticia Let’s Go. It’s about my involvement in skateboarding, skydiving, surfing and things like that. We have been filming for three months. The episodes just started airing on Canal OFF.

I’m also filming for a Battle Commander for The Berrics. I have about ten tricks filmed, and I probably need 30. It’s been a challenge because I’m trying to film new stuff, but we plan to drop it this year. And they just made me a character in the new Tony Hawk video game. That’s crazy! I used to play the game and now I’m in the game! I went in one day and we shot the whole thing. They took over 2,000 photos of me in a 360-degree scanner. It looks just like me, with my tattoos and everything!