Keenan Reynolds scored an NCAA-record 88 touchdowns during his career as quarterback at the Naval Academy. He kept the footballs from only four of them, and he knows exactly which ones they are.

The first was No. 38, which he toted across the goal line against Army as a sophomore to set a new NCAA single-season mark for rushing touchdowns by a quarterback. It’s also the only ball he kept from a game against Navy’s rival ­– Reynolds is proud to say he went 4-0 against the Black Knights, the only Midshipmen QB to ever do so. “I don’t like to talk about the records, but that’s definitely one of my favorites,” he says. “No one can ever take that one; they can only tie it. That’s pretty awesome.”

Sex, Scandal and the Marching Band: Inside the New Rules at Ohio State

The second ball was No. 50, and he didn’t keep it just because it was a nice, round number. It broke the Navy record for touchdowns in a career held by another former QB, Ricky Dobbs. It was the first of three touchdowns Reynolds scored in a 41-31 victory over San Jose State on October 25, 2014, midway through his junior season.

The third ball was No. 78, and it was the one that gave him the NCAA touchdown record that had previously belonged to Wisconsin’s Montee Ball. It came on November 14, 2015, on the first drive against SMU. Another victory.

The fourth ball was No. 88, his final touchdown in his final game for the Midshipmen. It capped Navy’s 44-28 victory over Pittsburgh in the Military Bowl, a game in which Reynolds went out in style. He led the Middies in passing yards (126), rushing yards (144) and receiving yards (47), ran for three touchdowns and passed for a fourth.

The four footballs reside in Reynolds’ parents’ house in Antioch, Tennessee. His father, Donny, a former college football player, is having the balls encased in glass, so his son can one day display them in a house of his own. But before he does that, Keenan wants to add one more ball to the collection – his first NFL touchdown.

“Yeah, for sure I’ll keep that one,” he says. “It would definitely be a dream come true to have that happen.”

But for now, Reynolds is a man without a team. The drive for ball No. 5 is a singular journey. If he is going to add to his collection, he must overcome long odds, learn new positions, show his versatility and maybe catch a break ­­(and a pass) or two. Since 1995, only one player from Navy has been selected in the regular NFL draft – long snapper Joe Cardona, taken by the New England Patriots in the fifth round last year. Offensive guard Mike Wahle was taken by the Green Bay Packers in the second round of the 1998 supplemental draft. Only three Navy quarterbacks ever have been selected: Roger Staubach (1964), Tom Forrestal (1958) and George Welsh (1956).

For more perspective, only 18 players in Naval Academy history have been drafted. Or, the same number of draftees Florida State has produced – in the past two years. And it’s difficult to say if Reynolds will be the 19th. He’s a 5-foot-11, 205-pound triple option quarterback who attempted only 462 passes in his four-year career, 67 less than top quarterback prospect Jared Goff of Cal attempted last season.

Yet, coaches and scouts have to admit Reynolds has a nose for the end zone. He also knows where to find a hole and how to get through it. And he’s a winner: Navy went 32-13 in games Reynolds started, and the Middies have him to thank for a three-game bowl winning streak they’ll carry into next season.

Reynolds knows his future, if he has one in pro football, is probably not under center.

Reynolds was invited to play in the East-West Shrine Game on January 23 at Tropicana Field in St. Petersburg, Florida. While home for Christmas break in Antioch, he tweeted the following in order to get ready for the senior showcase:

Any QBs in the Nashville area trying to get some work in? Hmu!

“I was just trying to catch some passes before the Shrine Game,” Reynolds says. “I ended up throwing with C.J. Beathard. We’re in the same big athletes’ group chat. I got to know him a little bit at the Tennessee East-West game in high school.”

Beathard, who also lives in the greater Nashville area, was fresh off leading Iowa to 12 wins and a Rose Bowl appearance. Just two winning college QBs tossing the pigskin at a local high school field.

Reynolds was put at running back for the Shrine Game by East head coach Charlie Weis. Reynolds also was afforded the opportunity to work under assistant coaches Mike Alstott, a six-time Pro Bowl fullback for the Tampa Bay Buccaneers, and Troy Brown, a wide receiver who earned three Super Bowl rings with the New England Patriots.

“It was an honor to be coached by those guys,” Reynolds says. “I spent a lot of time with Mike Alstott. He’s a legend in Tampa and one of the best fullbacks ever to play. We talked a lot about footwork.

“Troy Brown…I was talking to him about returning punts. That’s something I could put in my bag,” he continues. “And Coach Weis has been in the league, coached at the highest level. I was just trying to take in as much information as I could.”

Unfortunately for Reynolds, he tweaked his back toward the end of the week and Weis held him out of the game. But he still made a major impression on Alstott, now a high school coach in Clearwater, Florida.

“He’s just a top-notch kid,” Alstott says. “From a coach, going into the situation not knowing him, he was first-class. Coaches talk about being coachable. He’s obviously that kind of kid. His ears are wide open. His eyes are wide. He’s learning. He’s studying. The week I was with him I got to see all those traits.”

The missed opportunity to play in front of a host of NFL personnel could loom large. Reynolds did not get invited to the NFL Scouting Combine, which begins Tuesday in Indianapolis and brings in about 300 prospects. Considering 256 players (including compensatory picks) were drafted a year ago that’s more bad news for Reynolds’ chances.

But when asked about the snub, he hits back with a stat.

“Well, 41 players were drafted who did not participate in the combine in 2015,” Reynolds says. “Guess we will see come April. Who knows?” 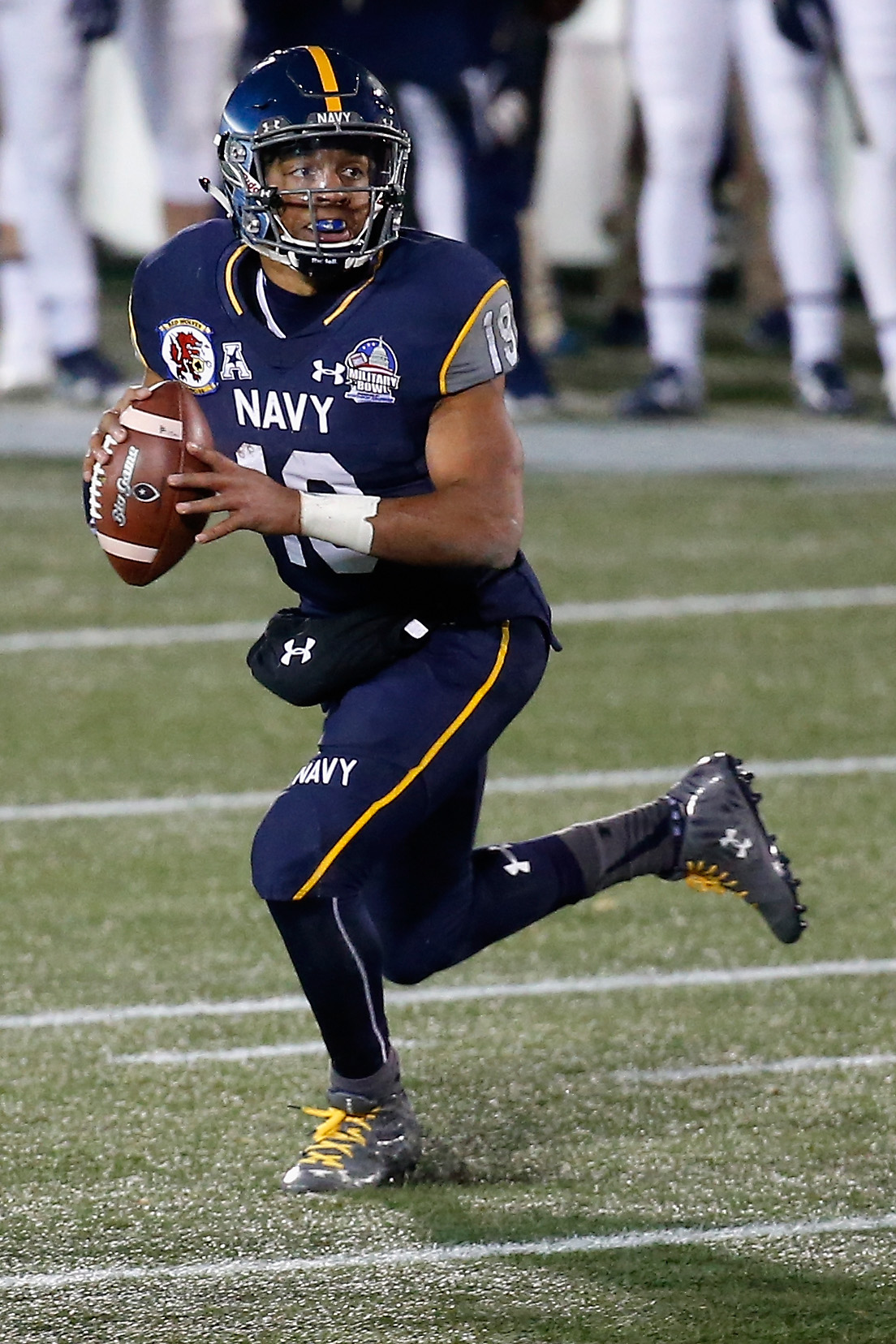 People who enroll at Navy typically aren’t afraid of a challenge. Reynolds had been a 4.0 student and record-breaking quarterback at Goodpasture Christian School, a starter from the opener in his freshman year. The only FBS schools that recruited him as a quarterback were Navy and Air Force. He didn’t know if he could hack it academically – who does? – but he knew he wanted to play under center. He wasn’t the only one.

“I can remember coach [Ken] Niumatalolo sitting in our living room and one of the things my wife asked was, ‘Do you play freshmen?'” Donny Reynolds says. “And he said, ‘If you can get through your plebe summer and still have the mental and physical ability and desire to play…it will be tough.’ Coach knew how hard that was because of his experience. My wife said, ‘Don’t be surprised if he ends up starting.'”

Jackie Reynolds, Keenan’s mom, proved prescient. Her son made his first start in the sixth game of his freshman year for the injured Trey Miller, and 4,559 rushing yards and 88 rushing touchdowns later here he stands, uncertain if there ever will be more.

The truth is that decision isn’t up to the NFL. The ultimate say in Reynolds’ future belongs to the Navy. Students who attend the Naval Academy commit to a five-year service term that begins upon graduation. The Navy has made exceptions; it allowed Cardona to play for the Patriots this season and serve in the offseason.

“My service is most important; that commitment is Number One,” Reynolds says. “Navy has made exceptions for exceptional athletes, but my priority is graduating and becoming an officer in the Navy.”

Unlike so many collegiate athletes, a future without football is hardly bleak for the most recognizable athlete to come out of Navy since David Robinson, whom Reynolds has met and who was able to honor his commitment around a Hall of Fame basketball career. No one doubts Keenan Reynolds will be successful. The doubts enter when it comes to football.

He does have some advantages, though. Teams looking to change the culture and character in their locker room certainly could look his way. He’s a leader. He’s affable. And there’s a good chance he’ll learn the playbook faster than most rookies.

“He’s intriguing,” one AFC scout says. “I haven’t watched much tape on him, but it’s obvious that his production was off the charts. Good size, good speed. Outstanding leader.”

His father stressed film study to Reynolds early in his football career, and that continues to pay dividends. He told his father the best thing about playing a new position is he doesn’t have to know what everyone on his side of the ball – and everyone on the other side – is doing on every play. Now he just has to worry about where to run or what route to execute or whom to block.

“He’s very athletic and very smart,” Alstott says. “Coaches and even ex-players, you look at a kid like that and you go, ‘He gets it. He has the ‘it’ about him.’ He’s going to be special in whatever he does in life, if it’s football for so many years and then obviously the transition into another occupation. He understands commitment and dedication and what it takes to be successful. That’s why I feel we’re going to see him on Sundays.”

Natural – and perhaps optimistic – comparisons have been made to Jaguars running back Denard Robinson, the previous NCAA record-holder for QB rushing yards, and Patriots wide receiver Julian Edelman, a QB at Kent State.

“Those are pretty amazing guys to be compared to,” Reynolds says. “They can definitely do their thing. The other guy I’ve been looking up and researching is Antwaan Randle El. He made the transition from quarterback at Indiana to one of the great Steelers wide receivers of all time. That’s somebody I want to try to model my game after.” 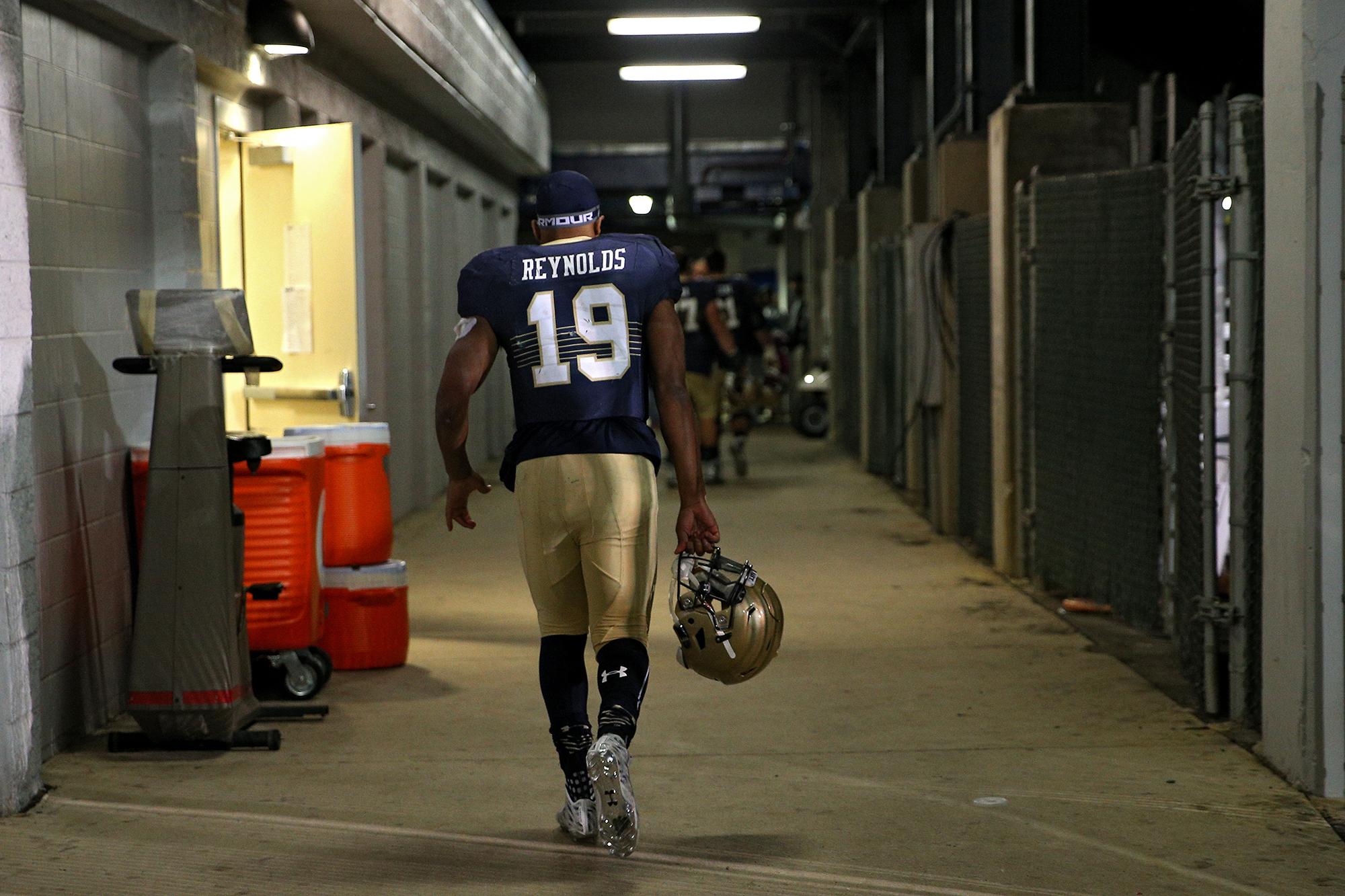 Randle El caught 370 passes for 4,467 yards and 15 touchdowns and rushed for 438 yards in a nine-year NFL career. He also completed 22-of-27 passes for 323 yards and six TDs. And that doesn’t count his most famous touchdown pass, a 43-yarder to Hines Ward to seal the Steelers’ 21-10 victory over the Seahawks in Super Bowl XL. It’s not hard to imagine Reynolds taking a handoff on a reverse and throwing a pass, either.

Even if goes undrafted, he almost assuredly will be invited to an NFL camp. It’s there he hopes his desire, work ethic and versatility will earn him a chance to add a fifth football to his collection.

“I just want a chance,” Reynolds says. “Anybody who puts on pads wants to play at the highest level.”

Donny Reynolds is sure his son will make the most of any opportunity.

“With Keenan, if they give him a shot he’ll try to be the best player on the field,” he says. “He just needs one team to give him a shot. That team probably won’t be disappointed.”

“Oh, he knows that football has to come to me.”