Only in professional wrestling can a former yachting champion and aspiring actress from Japan conquer a South Dakotan MMA veteran known more for grounding opponents with chokeholds than outracing them in high-seas regattas. Such was the scene last night, as recent NXT signee and ex-World Wonder Ring Stardom standout Kairi Sane (previously known as Kairi Hojo overseas) scored a 1-2-3 over UFC/Strikeforce alum Shayna Baszler (who also happens to be among Ronda Rousey’s unofficial Four Horsewomen faction) and was named victor of WWE’s inaugural Mae Young Classic tournament.

Subsequently, Sane – who comes to the ring in character as “Pirate Princess,” down to requisite captain’s-wheel accessory – will get a shot at the currently vacant NXT Women’s Championship at NXT TakeOver: Houston on November 18th. Less than 24 hours removed from delivering a victorious diving elbow drop to Baszler, Sane, through a translator, looked back on going blow-to-blow with world’s best female talents and ahead toward enthralling the crowds in Houston and beyond.

You feeling OK after taking all those bumps throughout the tournament?
Thank you for your concern. Yes, there’s been some damage to my body, but I’m fine. I’m thrilled to be here.

Is there some part of you that realized last night, “Uh oh, now it’s all really happening?”
I was so focused on winning, and I have still been surprised that I did it, and now I know I have to realize, “The end is the beginning of something new.” So I’m telling myself, “What’s my next goal?” And I know what that is, so I’m ready.

You’ve done so much tag-team wrestling in Japan. Are you a more confident singles competitor after this experience?
Yes, it affected me greatly. There were 32 athletes competing from worldwide, and I was doing as many as three [matches] a day, and I have to say I was proud of myself that I could participate. It was such a big deal. 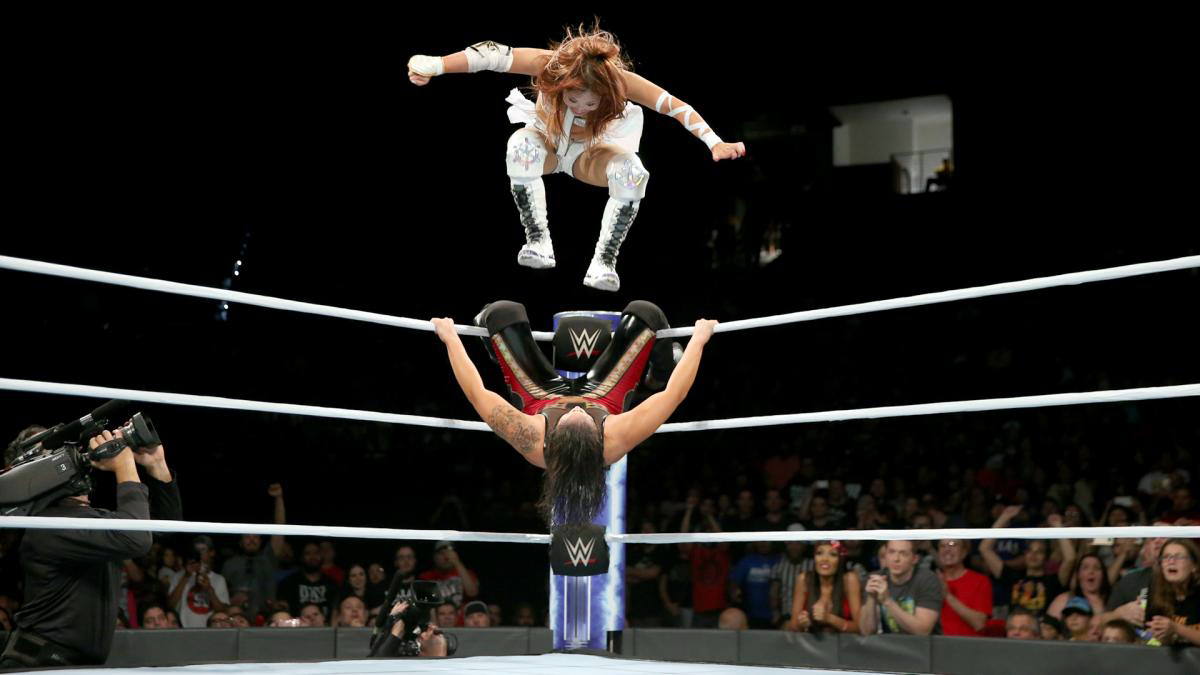 When you started wrestling, were Mae Young and other American women wrestlers on your radar? If not, who?
I’ve known of Mae Young from the beginning, and I was so proud participating in a tournament with her name in it. Even when I was living in Japan, I thought athletes like Mae Young were powerful and attractive and charming. There was always something attractive with those women.

Then it makes sense, especially since you came to wrestling as an aspiring actress, that you would aim to project a complete aura in the ring.
It’s very important to me that I give my vitality and courage to my audiences. I was the shortest [Mae Young competitor], as you know, but I won like this and just want to give the impression to everybody that you don’t have to give up on your dream. I want all women to know that women are strong, and the women’s revolution in WWE is very important to me.

Are you specifically looking forward to entertaining the NXT: TakeOver audience in Houston, who really could use a lift after Hurricane Harvey?
I’m very much looking forward to being there. Those people, it’s so unfortunate they had to suffer. And my purpose in being there is to encourage them to hope, and I know I’m going to do my best.

Lastly, your Stardom profile lists your blood type. Is there something important we should know about your blood being Type O?
[Laughs] Yes, that’s right, I am blood Type O. People tend to think, as far as I know, that people with O blood types are friendly and casual. I love the American people and would like to be friendly with them and get along with everybody. That’s what I’d like to convey.