Contrary to popular belief, Jimmer Fredette is still Jimmer Fredette. He still has a proclivity to launch the ball from an unconscionable distance and watch it gently drop through the net. His panoply of scoops, dips and other sleight-of-hand finishes at the rim still curl over and around and under the arms of substantially taller and stronger and bouncier men. Jimmer Fredette – the Jimmer Fredette who scored nearly 30 points per game on his way to winning the Wooden Award at Brigham Young, who was the truest manifestation of Great White Hope-dom since Larry Bird – isn’t gone. He’s just in Westchester.

The Westchester Knicks, the New York Knicks’ D-League affiliate, play in the plainly named Westchester County Center, a venue that, try as it might, is just not a basketball arena. There is a large stage behind one of the baselines. There is no lower level of seating along an entire sideline. Even its pomp, the obligatory pregame hype video, seems to have a sideways awareness that it lacks circumstance: the video begins with shots of the team’s Greyhound bus pulling up to the County Center.

And it is here, in White Plains, where Fredette – alongside countless other members of the basketball periphery – battles to re-prove his NBA mettle. But the difference between Fredette, and, say, fellow Dub-Knick Jordon Crawford, a 5-foot-6 shock of cornrows and Floyd Mayweather’s bestie, is that while Crawford is a perfectly fine player, Fredette is on the precipice of being a transcendent one.

Nonetheless, for the first time in his professional tenure, Fredette is playing spectacularly well; in his nine games with the Westchester Knicks, he is averaging nearly 24 points and 4.3 assists per game. Too, he is maintaining remarkable efficiency, shooting an impressive 49.7 percent overall and 45.5 percent on 3-pointers, all the while using over a quarter of his team’s possessions when he is on the court – statistics that are not far removed from those garnered during his cult-hero-cum-cultural-institution days at BYU. But more than points or individual glory, the Westchester Knicks provide Fredette with the most important thing of all: opportunity.

“I definitely had a lot of offers overseas,” Fredette says, explaining his decampment to White Plains while his teammates warm up for a game against the Delaware 87ers, “but I knew that the Knicks organization is a great one and that I would be able to play and get into a rhythm. And obviously in the D-League, you get a lot of NBA looks, so that definitely played a part in the decision.”

If Fredette has qualms about being seen as an aspirational has-been/wannabe, if his ego is stung after moving from basketball’s glorious majors to its scuttling minors, you would never know it. Off the court, he is lank and relaxed, hands loosely dangling behind his back, politely tilting his body forward as if he really, deeply is interested in questions about his NBA sabbatical. He is used to the drill of being interviewed as a damaged novelty and has a stock supply of talking points that he hits hard. The top three: Opportunity, opportunity, opportunity.

Whitney Fredette, his ever-chipper wife, ably provides background vocals: “I haven’t seen Jimmer in a basketball game with actual sweat on his face in a long time,” she tweeted after his first game as a Dub-Knick. “Makes me so happy. Don’t care about the circumstances.”

Fredette’s stint in the NBA was characterized by an unrequited desire for stability, comfort and, most of all, minutes. In just his first four seasons, he was a member of three franchises (the Kings, Bulls and Pelicans) and was overseen by four coaches (Paul Westphal, Keith Smart, Tom Thibodeau and Monty Williams) who all played him sporadically. 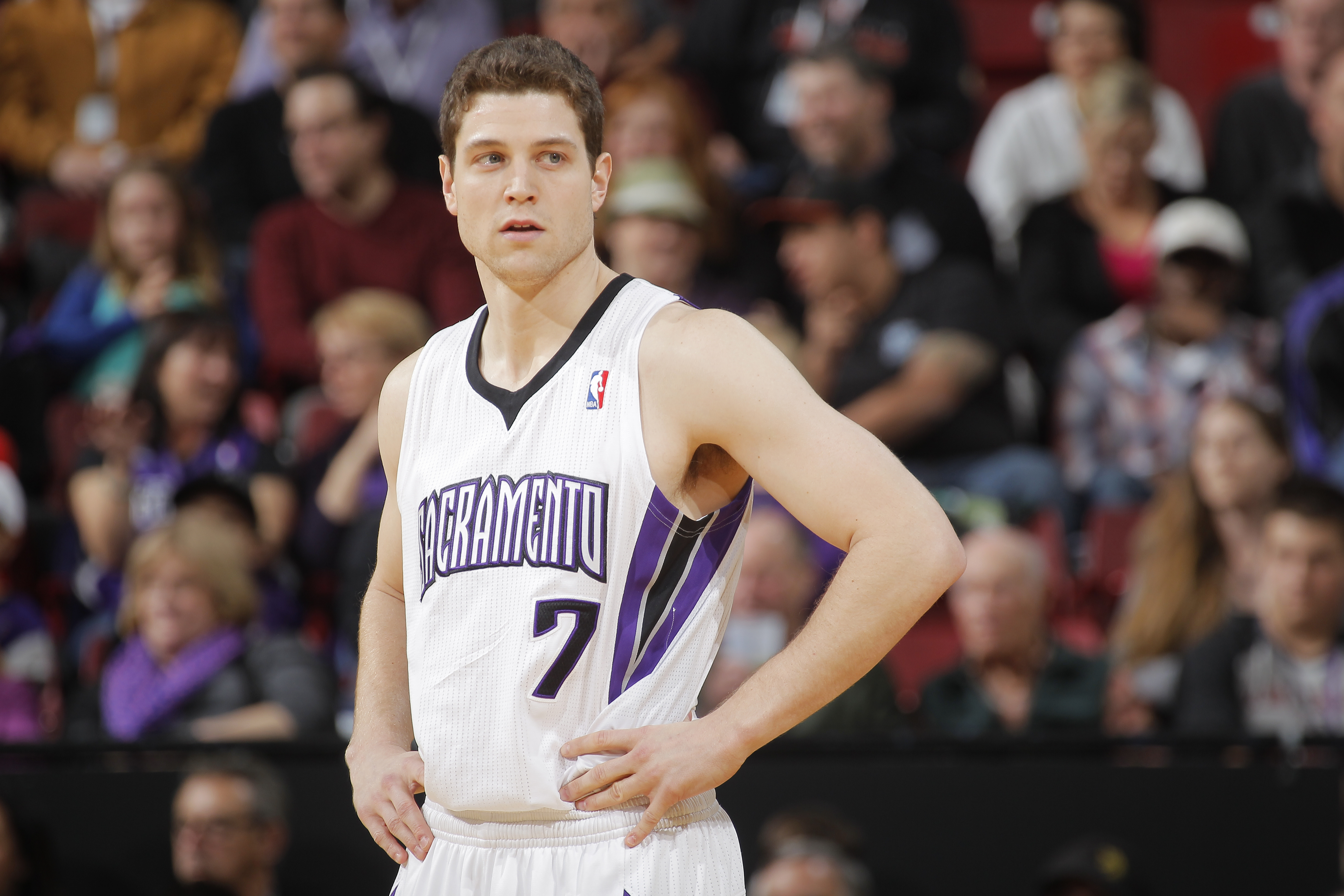 “Like everything in your life, you need some consistency,” says Jackson Emery, Fredette’s former BYU teammate and a close friend. “You need to have some consistency in order to get comfortable, and Jimmer’s never seen that from a playing standpoint.”

Still, an entire basketball league and more than four years removed from the 2011 draft, Fredette remains steadfast in the belief that he is a NBA-caliber player. “I think that the biggest thing is to find a coach and a team that believe in me and believe enough in my abilities to put me out there on a night-in and night-out basis,” he says. “Obviously I have lots of things to work on and I will work on all aspects of the game, but I think that if I get an opportunity to just play consistent minutes for someone, I can provide a spark and be a good bench player for someone in this league.”

But what if he can’t? Perhaps Fredette – like Adam Morrison and Tyler Hansbrough and a legion of Great White Nopes before him – is just a standard basketball player built up to mythic proportions by gaudy college statistics and a pat narrative. If one were to believe an anonymous former coach, “Jimmer thinks everybody is stupid. He thinks everybody needs to come and just turn over their offense and let him shoot it anytime he wants.”

And maybe Fredette does and maybe the team should. Or maybe the coach is right and Fredette is a prima-donna-in-Mormon’s-clothing. Right now, though, Fredette is unfazed. “I haven’t actually heard the comment,” he says with a shrug.

Right now, there is a game to be played and, NBA or D-League notwithstanding, “I just want to have a great time playing basketball,” he says. Fredette is, by any conceivable measure, one of the 500 best basketball players in the galaxy, yet here he is, standing in a yellow-lit cinderblock stairwell in the Westchester County Center, wearing a jersey emblazoned with a Chase advertisement that is nearly same size as his name. At just 26 years old, his dream may be cruelly behind him or scarcely ahead.