It's Ohio State, and Everyone Else: Buckeyes Bash Ducks to Win Title - Rolling Stone
×
×

We should talk about the quarterback first, because, I mean, how do you even begin to describe Cardale Jones as a rusher, except to resort to wild hyperbole? You remember those Looney Tunes bits where characters would get flattened into manhole covers by some blistering force of inertia? That’s what it’s like watching Ohio State’s third-string quarterback tote a football: He doesn’t just punish linebackers, he pancakes them.

Jones was not even Ohio State’s most lethal weapon in last night’s 42-20 national championship win over Oregon – that would be a baby bull of a tailback named Ezekiel Elliott, who plowed over the Ducks for 246 yards – but the whole quarterback-roulette saga became the central metaphor for the Buckeyes, who were left for dead after their original signal-caller, Braxton Miller, got hurt before the season began.

Weed, Speed and Greed at the College Football National Championship

Then Ohio State was left for dead again after an early-season home loss to Virginia Tech, before backup J.T. Barrett resurrected their hopes; and then the Buckeyes were discounted a third time when Barrett broke his ankle, thereby putting the burden on Jones to complete the trifecta of winning the Big Ten championship game, the Sugar Bowl over Alabama and this, the title game, at Jerry Jones’ unassuming little North Texas football hut.

Cardale Jones is a freight car with no brakes, loaded with grizzly bears, careening over a ski jump. He also happens to be able to hurl a football 85 yards downfield, which means he is essentially Jim Brown with a T-shirt cannon strapped to his shoulder. It seems inevitable that he will, at the very least, be a great college quarterback, which means that Buckeyes coach Urban Meyer will deal with the strangest dilemma any modern coach has ever faced: He now has three potential Heisman Trophy candidates coming back to play quarterback next season. 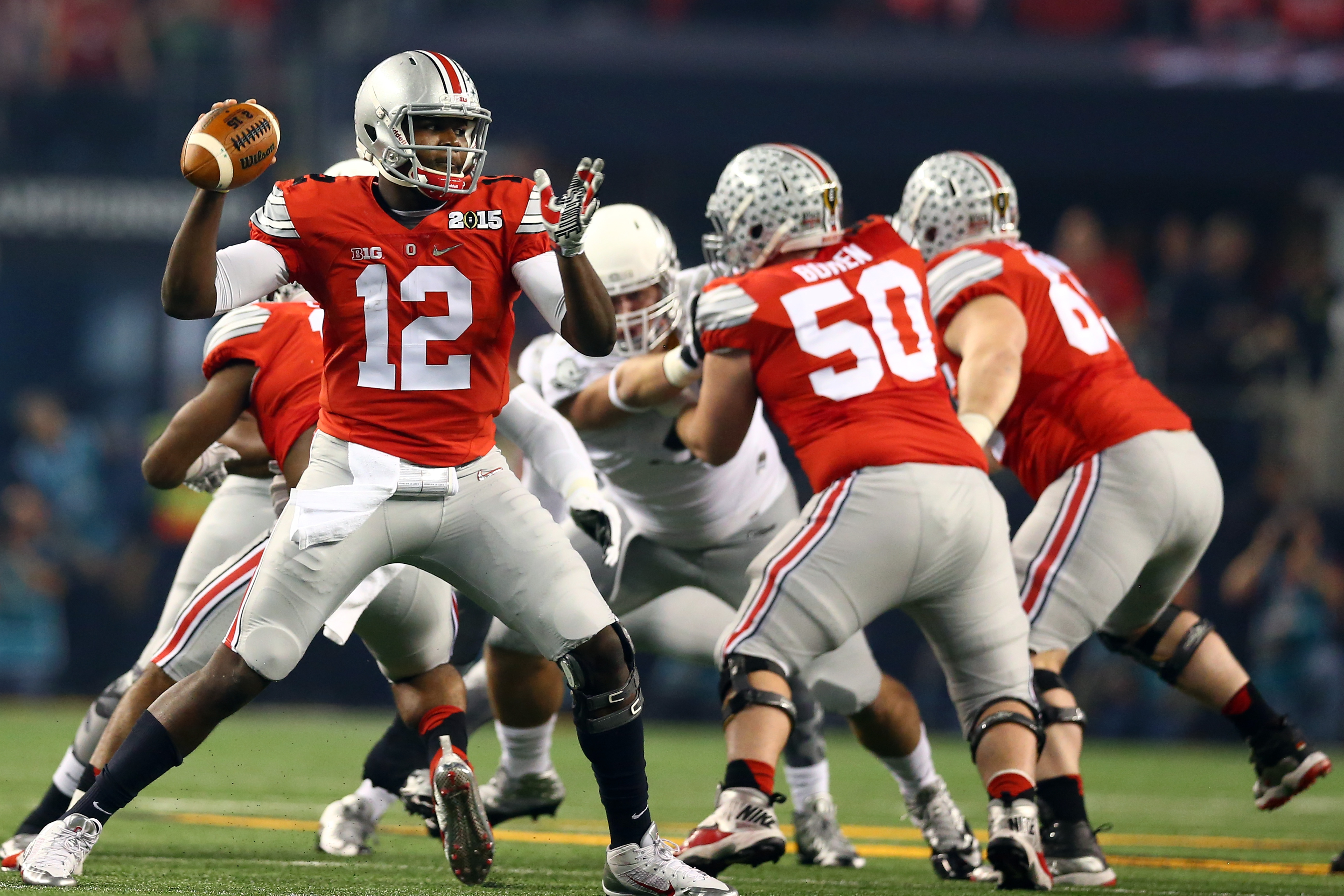 This is an absurd thing to contemplate. It’s downright stupid, in fact, but then, the very idea of Ohio State being here felt like a ridiculous notion for most of the year.

A Big Ten team? Seriously? The one thing that all of us seemed to discount was that Ohio State had managed to lure one of the two best coaches in the country out of retirement after he’d burned out at Florida; the thing we slept on was that while the Big Ten was floundering to the point of near-irrelevance, Meyer was rebuilding the one program that was essentially recession-proof (thanks to the surfeit of homegrown talent in Ohio) into a budding Midwest powerhouse.

Still, it wasn’t even supposed to happen yet. Not this season. But after the Virginia Tech loss, the Buckeyes kept getting better, and it didn’t matter who was playing quarterback.

“From game one to game 15, I’ve never seen anything like it,” Meyer said. “This team wasn’t supposed to do this, but we finished this year a great team. I certainly did not see this happening after spring practice, and earlier this season.”

You kept waiting for the holes to show. After Oregon scored quickly and lethally on its first drive of the game, the Buckeyes appeared to be on the verge of a fast collapse. You could almost feel the echoes of years past, of those Jim Tressel-led teams that stumbled so badly on the national stage and commenced the Big Ten’s long slide into the second-tier of major conferences (that Tressel was here, featured on Jerry Jones’s moon-rover sized videoboard in the pregame, only heightened the dread). You thought, Maybe Ohio State isn’t ready. You thought, Here we go again, a Big Ten team that’s too slow and unsteady to compete in a game like this.

But then everything turned, and it turned in a way that felt both entirely predictable and completely surprising: Ohio State began to win in the trenches.

Ohio State began to overpower Oregon physically, both on the defensive and offensive lines. Elliott proved almost impossible to bring down, and Jones bored through the line on quarterback keepers. The Buckeyes took a 21-10 lead into halftime, and after Oregon scored on a long Marcus Mariota touchdown pass and a field goal to cut the score to 21-20, the Buckeyes handed it to Elliott over and over again; in the third quarter, nine of their 10 first downs came via rush, and in the fourth quarter, they ran the ball 17 times and passed only twice while finishing off the game.

“I really felt that kinda bigger physical fucking shit was over,” I heard someone mutter on the Oregon sideline in the final minutes, and I suppose this is the question the Ducks have to ask themselves, after pouring millions into a football program and a system that has now come up one game short for the second time in five years: Is it possible that Oregon is still not physical enough? Is it possible that the Ducks’ are trapped in some kind of ongoing loop of syntax errors, where their system has achieved optimal speed to win a hell of a lot of games, but they can still be overpowered in moments that matter? This seems like something Phil Knight might spend some time contemplating over the long offseason, except that Knight could be seen gallivanting across the AT&T Stadium turf to embrace Urban Meyer, whose team happens to be another Nike-outfitted program. (Even when he loses, Knight somehow manages to win.) 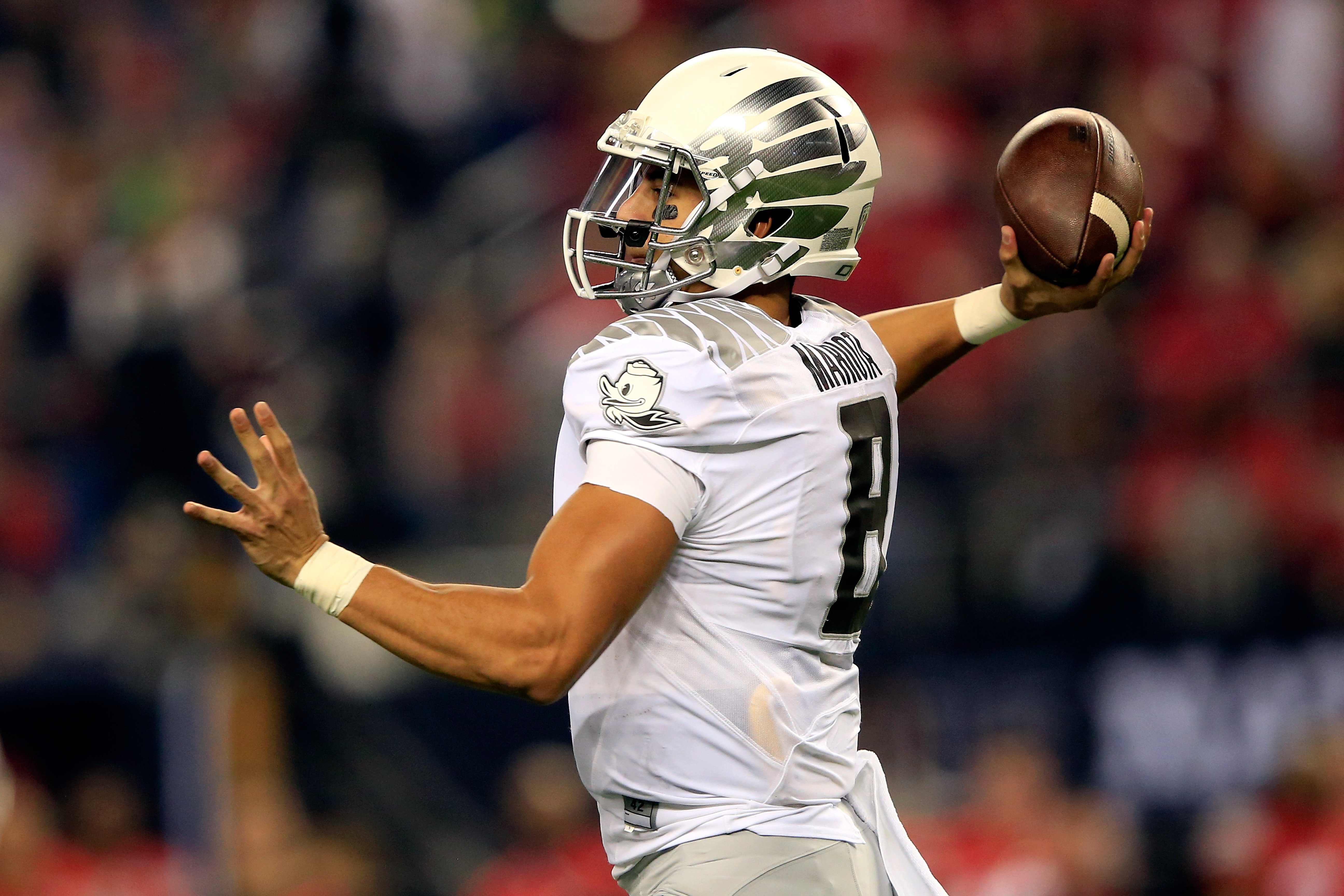 I have no idea if Oregon will make it back to the playoff again anytime soon, especially if Mariota (as expected) played his final collegiate game on Monday night. But it will now feel almost shocking if Ohio State isn’t back in the playoff next season, and maybe the season after that, too. Much will be made of the Big Ten’s sudden resurrection after this, but the truth is, the Buckeyes have such a huge head start over Jim Harbaugh at Michigan that it’s hard to see them losing a game next season, at least not until they reach the playoff. The Big Ten still has its issues to work through, but commissioner Jim Delany wore a shit-eating grin on the sideline for good reason: His conference now has a selling point beyond its politburo of a television network, something to heft it up to the level of the Southeastern Conference after years of SEC dominance.

We didn’t belong, we didn’t belong, we didn’t belong, an Ohio State staffer bellowed in the midst of the postgame chaos, and maybe, in a weird way, you could still make the case that they didn’t, that TCU or Baylor, by virtue of their own stellar seasons, should have gotten that No. 4 playoff seed instead. But all that was prologue, and if there’s one thing Ohio State proved this season, it’s that the prologue probably doesn’t mean as much as we think it does in college football, especially now that the playoff has so thoroughly expanded the possibilities.

The end is nothing like the beginning, the story changes and matures and expands as it goes along, kind of like college itself. Which means that more often than not, the best team may very well be the team that shouldn’t have been there in the first place.